). What makes it difficult on the LC5 is that it uses airbags at the rear for springs, with auto ride-height adjustment, and Toyota electronic shocks on all 4 corners, with a switch on the centre console so you can adjust the damping in-flight, from a 'comfort' setting through to 'sport' or off-road setting. TBH, I never did notice much of an difference between the settings, so always left it dialled in to the firm setting, because otherwise it felt like it wallowed a lot on corners, especially traffic circles (roundabouts to you lot). The front would also dip a lot when stopping at robots (traffic lights for the non-southern Africans ) even though I tend to not drive fast nor brake hard.

The problem has always been two-fold:

1. By replacing the shocks, would I endanger myself and my passengers by not having the auto-correction that the TEMS system supposedly provided;
2. It's always been seen as nigh-on impossible to do anything to the rear because of the airspring in place, and the auto-levelling. The mounts are entirely different to those for the coil-sprung variants, so I'd have to lose the airsprings and weld on coil mounts - no thanks!

So it seemed I was at a dead-end - none of the big guns seemed to care too much - no kit available from OME, TJM, IronMan etc. and all the local fitment centres I spoke to either ignored my query or said they could do nothing ...

Eventually I read about Darren McRae's upgrades on PradoPoint, which got me thinking, but then I found out about Airbagman in Oz and their partnership with ToughDog suspension ... Essentially you get a set of ToughDog adjustable 35mm bore shocks, and a set of uprated coils for the front, giving a 35 - 40mm lift (I didn't want a lot of lift) and this should remain with a winch bumper and winch in place.

Then - the rear gets a set of adjustable shocks as well, and a set of spacers to confuse the auto-height control to lift the rear more because it thinks it's too low. So you get to retain the auto-levelling, a great feature for when loaded for overland, and you also get to keep the in-cab adjustment for hi - normal - low settings which are of some use.

The piece de resistance though is two new airsprings and all the connectors and hose required to replace the OEM airsprings. This gives you bigger springs at the back to support the lift in place, and to allow a comfortable ride you'd not get from an over-inflated OEM set of airsprings.

After humming and ha-ing for a good few months (and while I saved my pennies ...) I decided to go with the kit. Order placed, and TNT duly delivered about a week later! Fantastic!

Anyway, then I realised I should have asked them to assemble the front suspension for me, as it came in bits, and would have come assembled for a few $ more. So the hunt for a hydraulic spring compressor started ...

Eventually I decided not to bother, and took the suspension and truck to Blackford Motor Engineers in Edinburgh to fit for me. I'd decided to do the rear shocks on my own, and ended up having to cut the top shock mount off due to the amount of corrosion that had taken place. So I managed to fit the spacers for the auto-height control and the rear shocks before I went to Wales, but couldn't get the front done in time. Pity. I disconnected the electronics anyway to see if there was a noticeable difference - there wasn't

So when I got back, off to Blackford I went, and for not much more cash than the hydraulic spring compressor would have cost, I got the front suspension done. We left the airsprings alone because thought that the wrong ones had been sent in error (turns out they're the right ones ...).

I forgot to take pre and post measurements, but the truck has gone up a fair amount - at least 30mm - now to fit the airspings and then it'll be job done . The front drive shafts have gone from a slight angle down from wheel to diff, to a slight angle up

so I don't think I need to worry about a diff drop kit - after all, it's the increased ground clearance I want 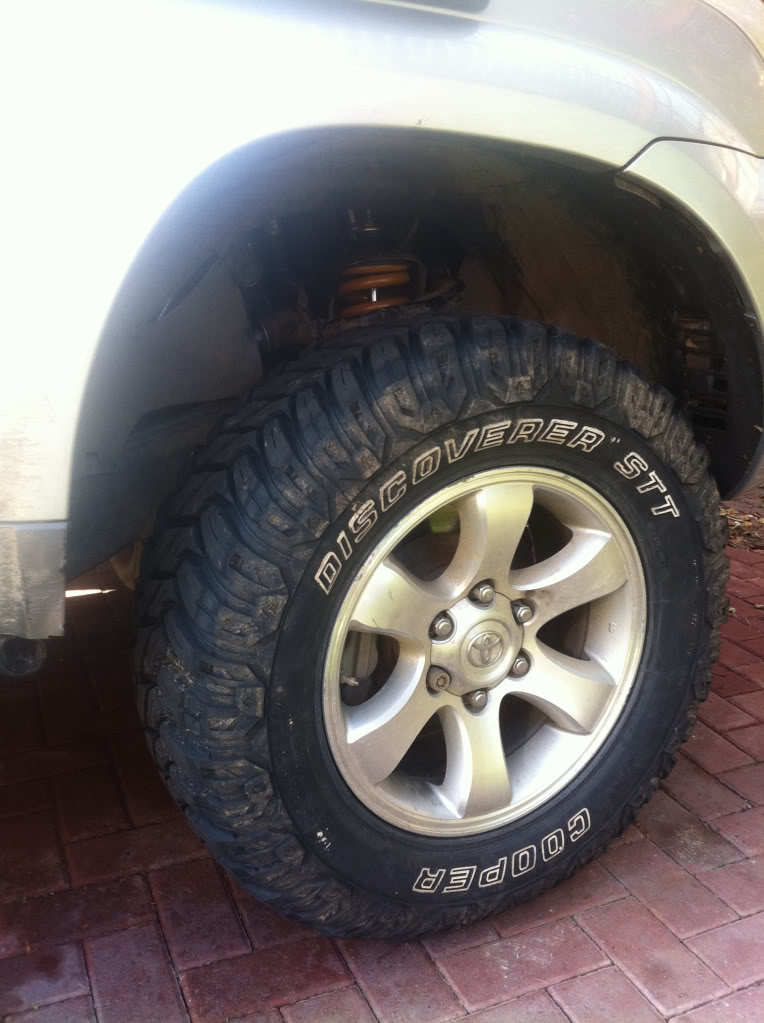 You couldn't see the top of the spring mount like this before ... Sorry about pic quality - off my iPhone, so will get better ones done later on ...

There is now a huge amount of clearance in the arch for the wheel - and will be even more when the winch bumper comes along next year. So I guess I'll be able to get those 285s in there OK

Initial impressions are good - the wallowing has gone, as has the nose-dive, and the vehicle feels much more stable going into corners - so looking forward to the airsprings now - but once started, that's a 'go on until successful, fix forward' type of job as I have to cut the existing air hoses

It goes in for MOT and service on Monday, and I'll get Mr T to set castor and toe-in again - they always seem to get it right

looks like a fair amount of lift on the front - mine were like that when i fitted new springs/shocks on front - ended up about 70mm over what it was before! - then dropped 20mm after i fitted winch and mount
but then i found i was getting driveline vibrations on hills and acceleration

so i have got slightly softer lift-springs now, and this has reduced the lift to about 30mm over original - and no more bad-vibes

this is what front looked like with the really stiff springs
i would be interested to know if you get same problem - seems some people's LC do and other's don't ... 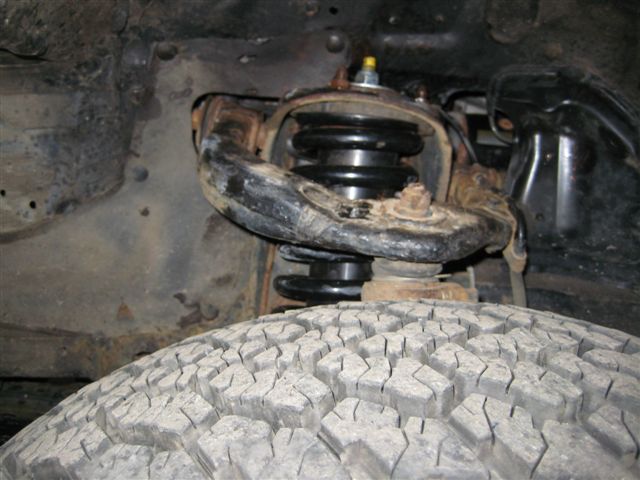 Looking good Gary but we want some proper pictures

And the rear air bags are on as well now - what a difference. I thought the new airbags were going to be too small - but they're about twice the size of the OEM ones, which are surprisingly small

Went playing on Saturday and was happily impressed. Will see if anyone got any pics for me ....

Come on you slacker, we want some updated pictures

A
Is this an oem coil spring?