Oh well, I thought it was interesting.
I like number 5. 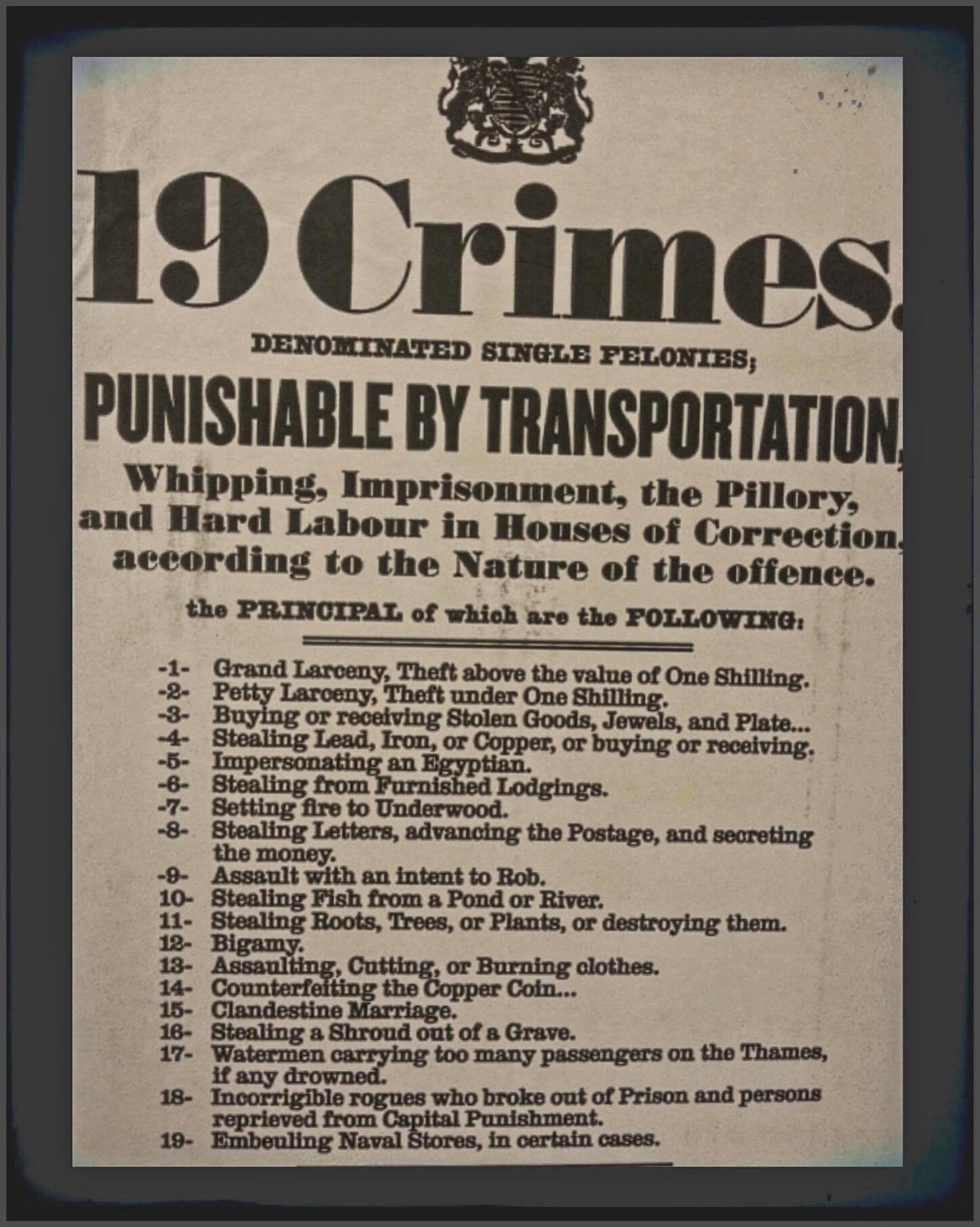 21 Crimes Punishable by Transportation in the 1700s and 1800s, Great Britain. This photo shows 19 crimes.. and was reported to have been found on the side of an old crate, but the more extensive list is below.

Transportation was used as a form of punishment since 1717. Under the "Bloody Code", courts were looking for punishment not as extreme as hanging, but tougher than a fine. The system of criminal punishment by transportation was officially ended in Britain in the 1850s, when that sentence was substituted by imprisonment with penal servitude by the Penal Servitude Act 1853. Listed are 21 crimes that saw over 160,000 ‘thieves’, ‘rogues’ and ‘vagabonds’ deported to Australian and American penal colonies during run of Transportation. Very few transported convicts ever returned to Britain. One of the conditions of a “ticket of leave” was that the freed Australian convict had to stay in the colony. The terms of transportation were usually seven or fourteen years, or life. Penal transportation was not limited to men or even to adults. Men, women, and children were sentenced to transportation, but its implementation varied by gender and age.

Arson, including setting fire to underwood.
From 1750, the privatisation of common land in England limited peasants’ access to resources such as firewood and game. In defiance of the law, the rural poor burned the newly “enclosed” forests and deer parks. From the 1790s, arson became an increasingly frequent weapon of rural protest.

Stealing from naval stores.
The term ‘naval stores’ originally applied to the components used in building and maintaining wooden sailing ships, including turpentine, pitch and tar - Great Britain’s dependence on its naval trade necessitated many boats, so naval stores were highly valuable.

Bigamy.
The circumstances surrounding marriage throughout the era ensured that many people were potentially guilty of this offence. Legal divorces were very difficult to obtain. Spouses disappeared, losing contact for long periods, often on voyages at sea. One spouse frequently just could not always know if the other was still living.

Stealing a sheep.
Stealing animals like sheep and cows was most common among convicts from Ireland and, unsurprisingly, rural areas. In Ireland, this crime was often associated with major upheavals such as the potato famine.

Counterfeiting the copper coin.
During the seventeenth century, an acute shortage of small change stimulated an explosion in coining. ‘Coining’ consists mainly of making counterfeit coins and ‘clipping’ or filing metal from the edges of silver coins; craftsmen such as locksmiths would make coining tools. Reports suggest that the counterfeiter’s method was to use bad money to buy goods and then to pawn these goods for good money – an early form of money laundering. Another method of laundering was to place high bets on the races at Epsom Course – if you lost the bet, you lost only false money, while any winnings were in good money.

Cutting or burning clothes.
This crime included cutting or defacing a piece of clothing while it was worn, or cutting and destroying silk in a loom or damaging the tools used for silk weaving.

Assault with intent to rob.
This is one of the few more violent crimes; the number of convicts transported for crimes of violence was fewer than 5%. This scarcity also likely had practical considerations, given the confined spaces on board convict voyages.

Petty larceny.
By far the most common crime that led to transportation was petty theft or larceny. A broad category, larceny could include pick-pocketing, stealing clothes from washing lines, and more. It was particularly common amongst urban convicts.

Grand larceny.
Similarly common to petty larceny, grand larceny was defined by the theft of property valued at over 12 pence, worth roughly £30 in today’s money.

Robbery on a public highway.
Dick Turpin is one of the most infamous highwaymen in history and was highly romanticised following his death. Although he pre-dated the Australian deportation era, those following in his footsteps would find themselves on a voyage to an Australian penal colony. Street robberies within London were also classed as highway robbery - the streets of London were designated as highways by one of the Transportation Acts.

Impersonating an Egyptian.
‘The wandering people’ or ‘gypsies’, called by themselves ‘Romany’, were thought to have been from Egypt and could tell fortunes through palmistry - it is thought the name ‘gypsy’ is a corruption of ‘Egyptian’. The actual crime was likely less the literal ‘impersonating an Egyptian’, but rather to disguise oneself as an ‘Egyptian’ or ‘gypsy’ to deceive.

Stealing fish from a pond or river.
In the 1800s poaching was considered to be one of the fastest growing crimes in Britain, and was a prominent and permanent part of the rural scene. Landowners fought a daily and often losing battle against these criminals, and poaching offences absorbed a major share of the magistrates' time.

Stealing iron, lead or copper, or buying/receiving.
Many types of stolen property could be sold through informal transactions with apparent ease; metals such as lead, iron, pewter and copper were sold directly to tradesmen who used them in their work. In 1788, a large quantity of stolen lead was sold by giving the buyer a forged letter which claimed the lead had come from ‘out of the Country’. Similarly, in 1784 two porters were duped by two sailors into taking iron from a ship to a blacksmith, the porters not realising that the iron did not belong to the sailors.

Possession of forged notes.
Historical depositions show it did not require much skill to forge banknotes; counterfeiting could be practised by those who had no technical proficiency, and simply uttering forged items was felonious in itself.

Stealing a shroud out of a grave.
A shroud within a grave would be a burial sheet of cloth. Traditionally, mound shrouds are made of white cotton, wool or linen.

Participating in riotous conduct.
A riot was held to have taken place if 3 or more people assembled to do an unlawful act, usually commit a breach of the peace, and then performed it. Also included in the category of rioter are those who only assembled with the intention of committing such a breach, whether or not it was performed.

Stealing from furnished lodgings.
A common crime amongst male convicts in particular, stealing from a furnished lodging (also known as a common lodging house) often carried the death penalty. Burglary or housebreaking was considered a more serious form of theft because of the level of premeditation involved.

Destroying roots, trees or plants.
The simple act of cutting down a tree or damaging plants was considered to be criminal, with one judge commenting in 1821: " …cutting down young trees, from malice to the owner, is as great a proof of malignity in the criminal, and may be a much greater injury to the owner; the loss of the trees is irreparable, both to the owner and to the public."

Buying or receiving stolen goods.
Unfortunately for many buyers, they did not actively seek out or intend to purchase stolen goods, but simply could not avoid purchasing stolen property as part of their everyday business.

Incorrigible rogues who break out of prison and persons reprived from capital punishment.

Pursuant to the so-called “Bloody Code”, by the 1770s there were 222 crimes in Britain which carried the death penalty. For those who managed to escape capital punishment, deportation was almost as bad; the long voyage to Australian penal colonies was often considered a death sentence in itself.

jibberjabber said:
‘The wandering people’ or ‘gypsies’, called by themselves ‘Romany’, were thought to have been from Egypt and could tell fortunes through palmistry - it is thought the name ‘gypsy’ is a corruption of ‘Egyptian’. The actual crime was likely less the literal ‘impersonating an Egyptian’, but rather to disguise oneself as an ‘Egyptian’ or ‘gypsy’ to deceive.
Click to expand...

But what's you point? It's just an old historical poster, with explanations as to what the outdated crimes were back in the 1700 & 1800's
Last edited by a moderator: Apr 26, 2020
You must log in or register to reply here.

North Wales to The Gamiba. In Ambulances and Fire Engines!

One for the road Chaps?

Can you suggest an alternative to Whatsapp ?
2