Hello all, a newbie here

but not to LC's I might add, I've owned a couple of 80's & also have a rather large fleet of tuned Toyota's lurking in the garage.

Anyway onto my weekends exlpoits of tweaking the TD

My recently aquired 4.2TD 24 Valve with 200k on the clock until today, went nowhere near as well as my previous 12v, in fact it was like driving an asthmatic milk float lol. Now having read up on the forums there appeared to be some useful info, so I started twiddling - however some of that info is INCORRECT (notably about the top screw) so let me enlighten you....

The 12v & 24v pumps appear to be the same unit just on the 24v there is some additional gumph between it & the engine that is there to downtune it for emissions reasons I would assume. Now what I have been fiddling with is the off boost initial throttle response & boost up fuelling not the main rail or set screw. The difference now is like night & day.


Previously
Flat as a pancake below 2k rpm, almost no boost recorded maybe 0.3 bar just, constantly having to change gear to drive it out of roundabouts etc so always having to keep it above 2k for everything accept cruising along at 40mph. Felt like a 2.0 petrol engine under there until 2k rpm.

Above 2k it would boost to 0.7-0.8 bar eventually & the turbo was laggy even once up in the rev range eg it'd take almost a second to go from cruising boost of about 0.4bar to full boost. So no notable punch when you floored it.

Now
Wow what a difference!!!! It now drives like a modern Tdi engine, with urge from 1k rpm, it'll boost if required from that rpm (but its not wise to load the engine up down there). However 40mph 5th overtakes from 1200/1300rpm can now be made with ease. Its got poke!! Much less lag when in gear, so cruising boost to full boost time is about halved. There is no apparent heaps of black smoke, no more than my old 12v anyway.


So how did we do it, well I actually took the top half of the pump assembly apart to see how it worked

I 'm not suggesting you do this, but it allowed me to understand whats going on & start adjusting accordingly.

It's a really simple system once you get your head round it.

Part 2) Is the all important diaphram & plunger unit: This moves up & down vertically, the cut away section touches on the internal plunger/pin, so when it goes down with boost it allows the other plunger pin to move outwards adding fuel. This is the part that has the offset in the cutout, so rotating it you can see the profile is offset to one side. Notice the profile is double sided, this is an overboost protection system I think. The bottom 45deg champfer is not standard! If you pull the plunger & diaphram out of the pump you cant get it back in again!! so to get it back you'll need to champfer the bottom of it to move the internal plunger in & get this plunger part to drop in. 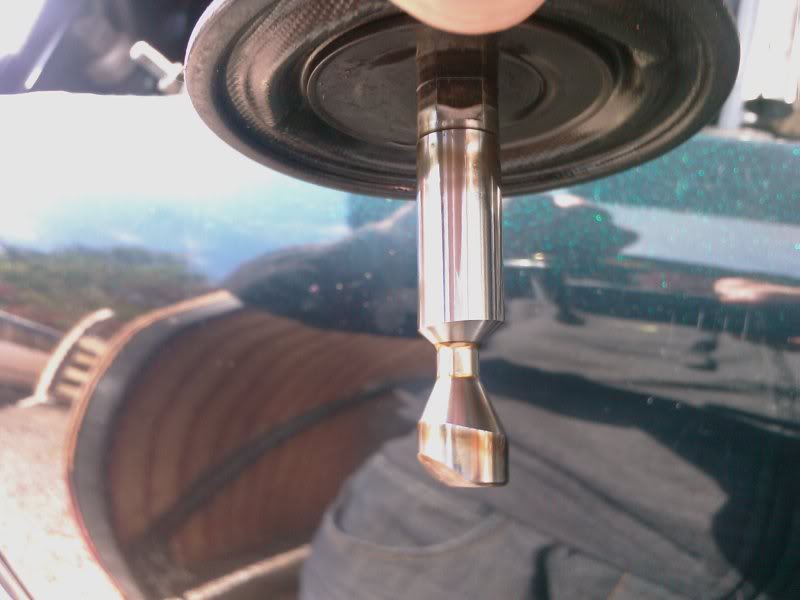 The top spring preloader: This is simply a fat disk with a chamfer cut across it at about 20degrees, so rotating it 360 degrees brings it back where it was, not as described in other places! You can see the top of this from outside the pump, its the bit with the 3mm allen key & locknut at the very top of the pump unit. 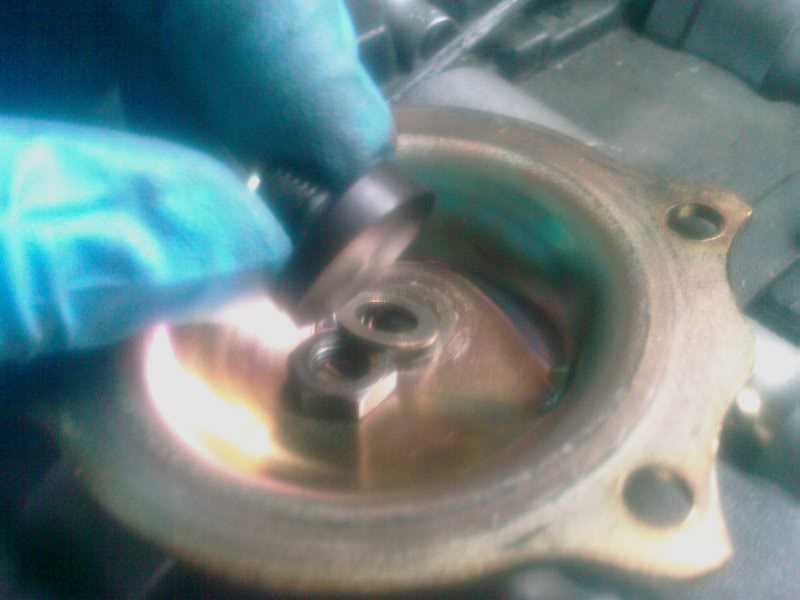 Part 4: This is the spring pretensioner/adjustment on, raising it anticlockwise will increase the spring tension & reduces fuel input under boost. Lowering it clockwise adds fuel under boost. 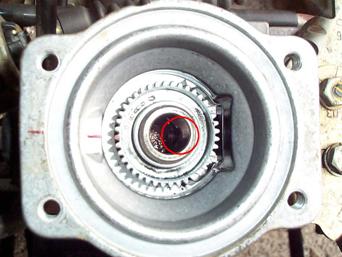 On the 12v & 24v there is a boost input to the top of the diaphram, as boost increases it pushes on the diaphram & spring pushing the plunger downwards supplying more fuel. On the 24v there is also a vacuum/boost supply to the base of the spring to keep things balanced out (for emissions I guess) This acts like an external wastegate on a turbo'd car by the way

If you remove the top of the pump/actuator part (4x4mm allen key bolts) you can see the diapram, if you carefully lift the diapram you see the plunger & spring preloader DO NOT lift the plunger part with diaphram more than a few mm!! Or you'll have to modify it to get it back in. However you can run the engine with the diaphram part open/exposed so you can have a play with settings.

1) Dialed the toothed wheel down clockwise till it bottomed out - for minimal preload on the spring tension, theres about 3-4mm of adjustment on it. It was near the bottom anyway.

2) Rotated the diaphram so it presented the least amount of profile to the internal punger - this can be felt as minimal tension as you rotate it - or with it running at say a fixed 1200rpm the rpm increases/decreases slightly as you rotate it (with no downward pressure on it) I noticed that there was a wear mark from where it had been set previously which was at about 60% of max profile.

3) Dialed the top preload on the spring top to max by rotating it to give max spring pressure down.

So what I have done is give this part of the pump its maximum possible settings but within design limits, from here is can be downtuned it if need be. However it now goes like stink compared to previously & as well if not a bit better than my old 12v cruiser, which always went well compared to others I had driven. So much less gearchanging & general ability to get up & go when required.

Hi mate and welcome. Thanks for the tuning info. I have opened a few 12 v 80s up now but only on the main acres at the rear of the pump. That has given a far better performance to the trucks but I will have a play tomoz if I get chance. Let u know how I get on. Thanks karl

Welcome and WOW, what a write up.

Not brave enough to play myself but mine has always gone like stink anyway so perhaps a previous owner played with it.
J

Perhaps a silly question but any significant difference in fuel consumption...?

Hi, I have changed my 12v trucks settings to as above and it does seem to give better low down grunt but top end power in the 2000-3500rpm range is completly flat hardly any go. Wouldnt dare try and put my trailer behind it now. Would i have to change my tps settings now or shouldnt the fuel settings change my gear changing? Thanks karl
S

my 24v has been sluggish especially towing anything and involving lots of gear changes to get up hills. so

Yes thanks for that, I had the afternoon free so followed what you did and also an injector fueling increase that Karl showed me. Seems to rev a lot quicker and stronger but as of yet not taken it out. Thank god you posted a picture of the 45 degree cut on the pin as somehow I managed to pop mine straight out! Had a moment of panic but managed to get it back in.

Will see tomorrow if its a win or a new engine!

Which Sean is this? I'm guessing I might know you lol

I'm towing to my racecar to Snetteron tomorrow (550m round trip) so will report back with mpg findings later on.
S

Which Sean is this? I'm guessing I might know you lol

Just a word of caution.

Nobody in this thread has mentioned anything about EGT. If it goes over 700degC, it WILL kill that engine.

I tweaked mine as well and yes it goes very well. But I have an EGT gauge installed to make sure it doesn't go to high.

By default I like it to be at about 650 under full load. But if the hill gets a bit long, it will creep up to around 700.

Right I shall report my findings.....

450 odd mile round trip towing the racecar about 2.2 tons all up & a pretty well laden LC with the EGR disabled for this trip.


Have to agree on the EGT side of things, having seen 1250deg on my racecars engine over the weekend due to an oveboost issue for all of 5 seconds, I know all about melted pistons!!!! You can buy EGT gauges for £35 on ebay now, just a note I run twin EGT's gauges on my racecar & you'll see a 160deg drop across the turbo so fit one pre turbo scroll if you can

I also have a wideband available so will be fitting that up temporarily shortly to get some real AFR data.

hi declan, Any ideas for my truck please??? will my tps have to be altered now i have changed the settings? It seems very flat now.power not great at all. Thanks karl

As other have said you do need to be very cautious when tweaking the pump and religiously make notes on each change you do so that you can undo anything if necessary. If you don't have an EGR guage tune on smoke under load. It is OK to get a puff on kick down and to see faint traces under heavy load (test on a slow very steep hill) but anything more that will effect the longevity of the engine.

The key thing is to make sure that the pump is correctly timed and pump and injectors are in good condition - I have come across a few pumps where they have been heavily tweaked to mask a problem and then when the owner has tried to do further tweaks things have gone horribly wrong and they have struggled to get the engine running smoothly.

My cruiser is pumping out unburnt Fuel and fumes are pretty strong according to my lady..... apparently the last owner installed a pin or something to stop the fuel cut under high boost, any suggestions on how to dial it back?
You must log in or register to reply here.

A
A far more interesting thread about bumpers, winches, CBs and snorkels etc.....
2

Wednesday at 7:56 AM
Buller