A journey into a 40-series ownership

Right, I'm back after a long hiatus from this fine community. I have been silent and not been posting for a few years now. This wasn't by choice, but due to life getting in the wayand lack of spare time to spend time on the internet and typing uninteresting post

As the title suggests, I am now the proud owner a a 40-series, a HJ45 to be precise. So in line with my thread on my other favourite vehicle A journey into a 60-series ownership, and because I clearly lack novelty when it comes to thread titles, I am starting another build/restoration thread on this newly acquired 1978 HJ45 pickup (or as my wife likes to call it: my "latest piece of junk").

Before I go on to the HJ45, I wanted to say that the HJ60 is still very much used and loved. In fact, lots of work has gone into it since my last post on the dedicated thread, so I will need to update that one as well at some point.

Okay, onto the HJ45.
I have purchased this on a pure impulse, on New Year eve, less than 24 hours after first seeing it listed on eBay. I was on my way back from a family outing and we had stopped at McDonalds for a healthy dinner. As wife and daughter nose dived into their phones, I did the usual eBay saved searches review and saw the HJ45 listing. Within 10mins of mulling over, I told my wife I wanted to go and see it over the weekend. Some will say this was an expensive Happy meal stop but so goes life.

But why an HJ45? Well I saw Tony's red one at Lincomb a few years back and loved the basicness (for any better words) and the utility side of it. I convinced myself then and there that I needed one too.


Enough of that, here are some pictures, because we all like pictures: 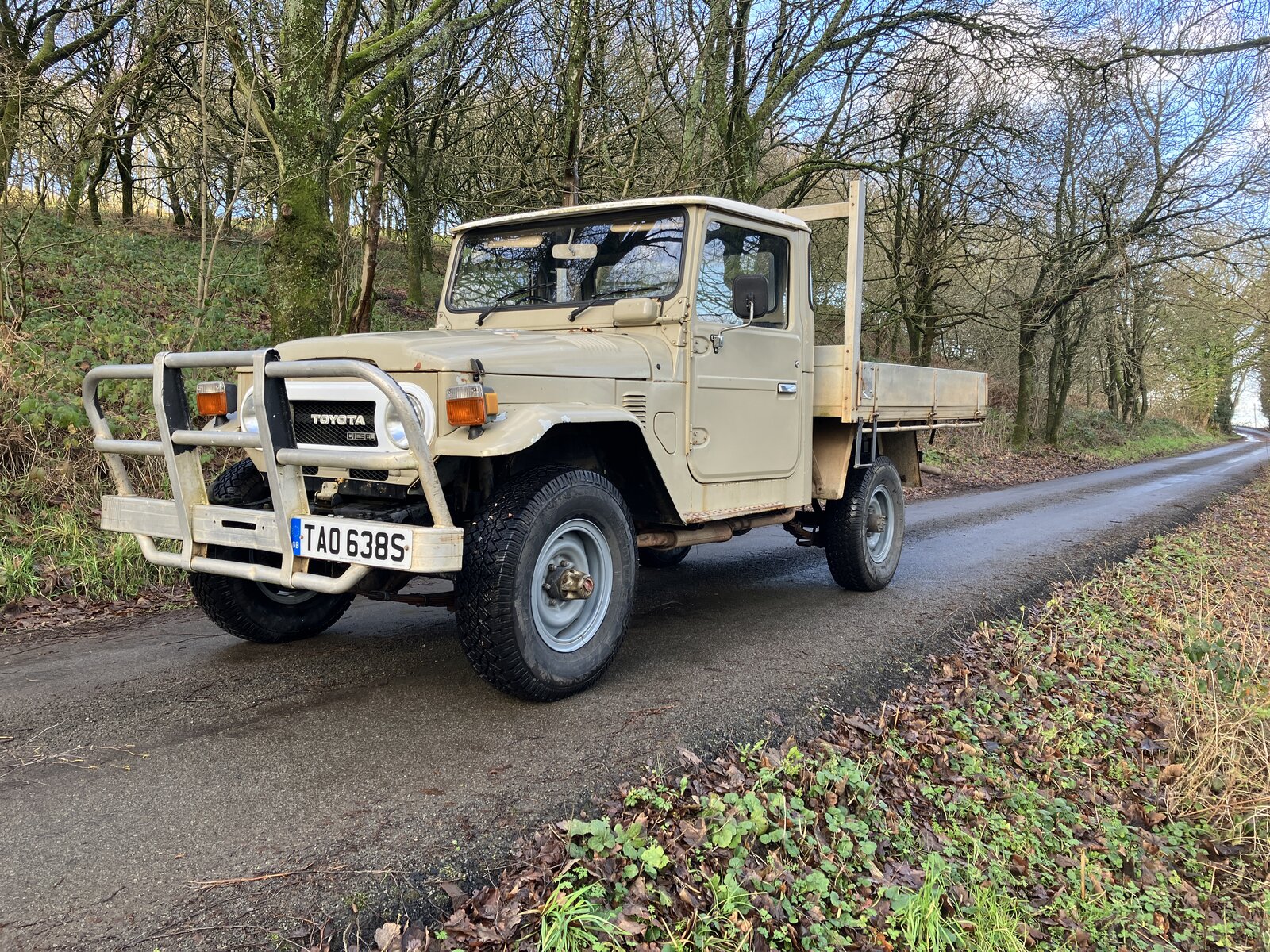 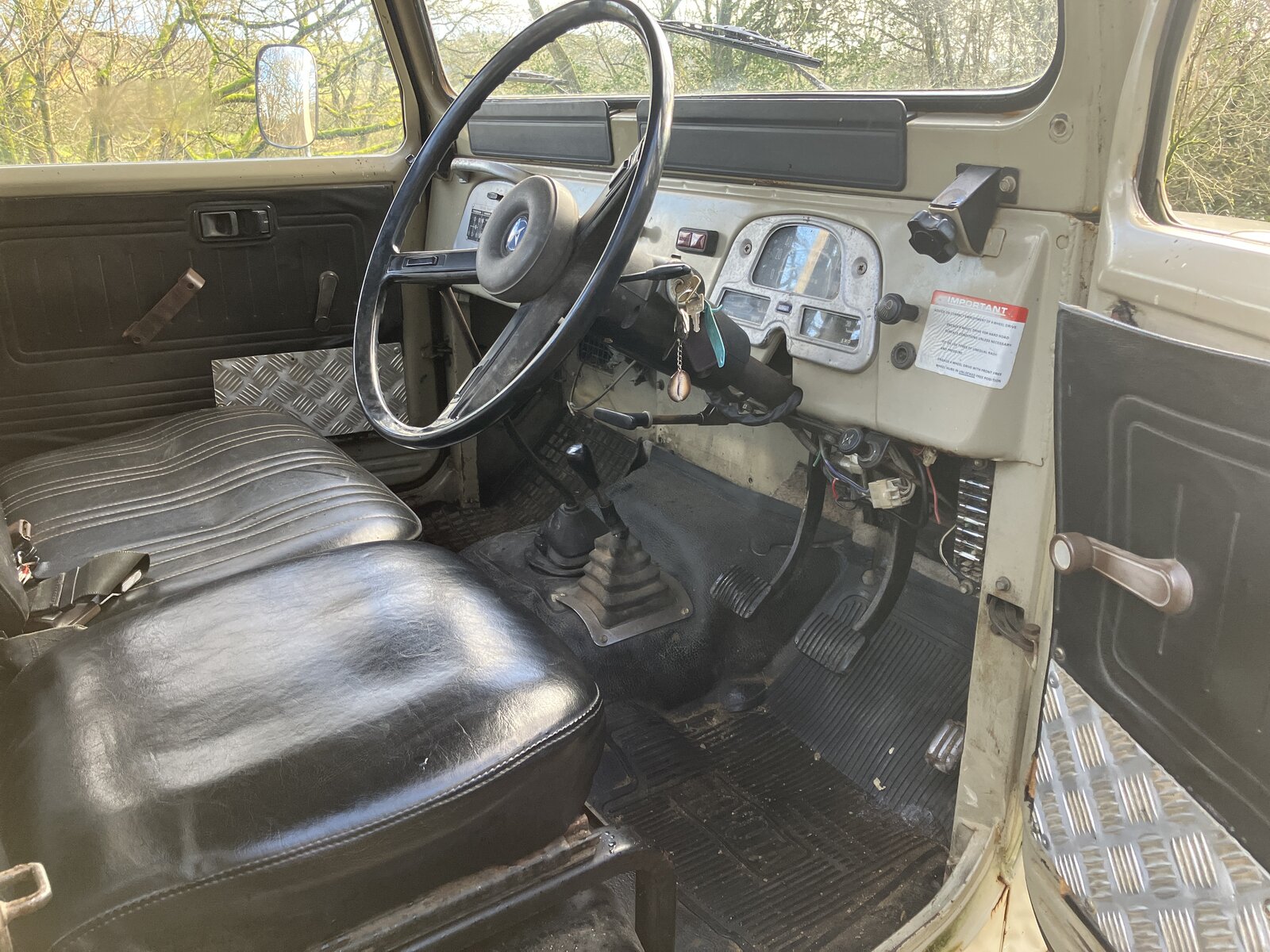 It's obviously been well used during it's previous life in Queensland but is is fairly rust free and running well. Long term plan will be to restore it. However short term is to use it as is whilst correcting the few issues it has. This also means that I can complete the restoration of the HJ60 which has been used as a bit of a workhorse until now.

First job was the mandatory first wash. Unlike my dear wife, the daughter has some interest in Land Cuisers and was keen to help out! (cue the cute picture, aww) Jobs to do then? Well, I won't lie, there're a few:
Long term, I will be looking to fit an original Toyota tub, although the current wider tray with the fold-down sides is very practical for the every days jobs.


That's it, will keep you posted!

Oh and more pictures, because we can never have enough eye candy! Thanks for reading this through,

Have I maybe seen it in and around Cambridge perhaps?

Have I maybe seen it in and around Cambridge perhaps?
Click to expand...

You may well have. I picked it up from the seller just outside Peterborough.

I followed him for a few miles once, completely going out of my way - I remember clearly it has a lovely engine 'burble'.

Wishing you many miles of enjoyable driving.

That's lovely that, correction they're lovely hope to have a 60 and a 40 in future. hell i even want the bug eyed 55.
look forward to seeing it progress.
F

Along for the restoration ride. Truck looks brilliant!
Don't like the adverts?  Click here to remove them

Thanks all for the positive comments and likes


GeekOKent said:
I followed him for a few miles once, completely going out of my way - I remember clearly it has a lovely engine 'burble'.

Wishing you many miles of enjoyable driving.
Click to expand...

It does sound pretty sweet and healthy I must admit. There is also a striking difference in soundtrack (and performance) between the H and 2H engines.
In fact whilst I'm comparing the two vehicles, it is amazing how much more refined and quicker (yes I know) the 60-series feels.

Plus the toasty heater in the HJ60 is definitely a bonus this time of the year. Still this doesn't stop me from using the HJ 45 as per latest update below.
Last edited: Jan 23, 2023

Starting to live with the old girl and straight away she's had to earn her keep.

First with climbing the icy lanes to get to work and then to fulfil the gardening support duties: I have also learned to live without central heating

using a fan heater on a timer for these frosty morning starts. It's low tech but it gets the ice off the windscreen. Woolly hat and glove are still required to undertake the morning journeys thereafter! Hi I just love the look of a FJ45 you will have a lot of fun with that cruiser all the best Tony keep the pics coming.

Tonytoyota2 said:
Hi I just love the look of a FJ45 you will have a lot of fun with that cruiser all the best Tony keep the pics coming.
Click to expand...

Thanks Tony. Is this a new user name or a different Tony?
If it's the former, do you still have your 2H powered HJ45 which which is responsible for this thread? Would love to see it again. BTW, I still owe you some money for the HJ60 window regulator. I hope to see you (and the other member of this fine community) at a future club meet.

Hi yes it's me and I have still got the old hj47 see you one day soon all the best Tony.
You must log in or register to reply here.