When removing the valve body from an A442F that has been in situ for a long time there's a pretty good chance you won't get the valve body out with the gasket intact because it sticks to the gearbox. Even if you're very very careful it can still end up tearing. I'm working my way through a rebuild of Ray's dead A442F gearbox and thought I'd document splitting the valve body to replace the gaskets. It was also a good chance to check that there was no debris from when the clutch plates disintegrated hiding in there.

This is the top side of the valve body that mates with the gearbox. The green arrow shows a pipe that covers one of the bolts you'll be needing to remove. Just remove the plate you see covering part of the pipe and then gently lever the pipe out. I also have a valve body here that has that pipe longer and bent around the bolt so it can still be removed with the pipe in place. This is the underside of the valve body and is what you see if you take the oil pan off: Remove the 8mm headed bolts till it looks like this (not all bolts are removed): Then turn it over and remove 8mm headed bolts till it looks like this: 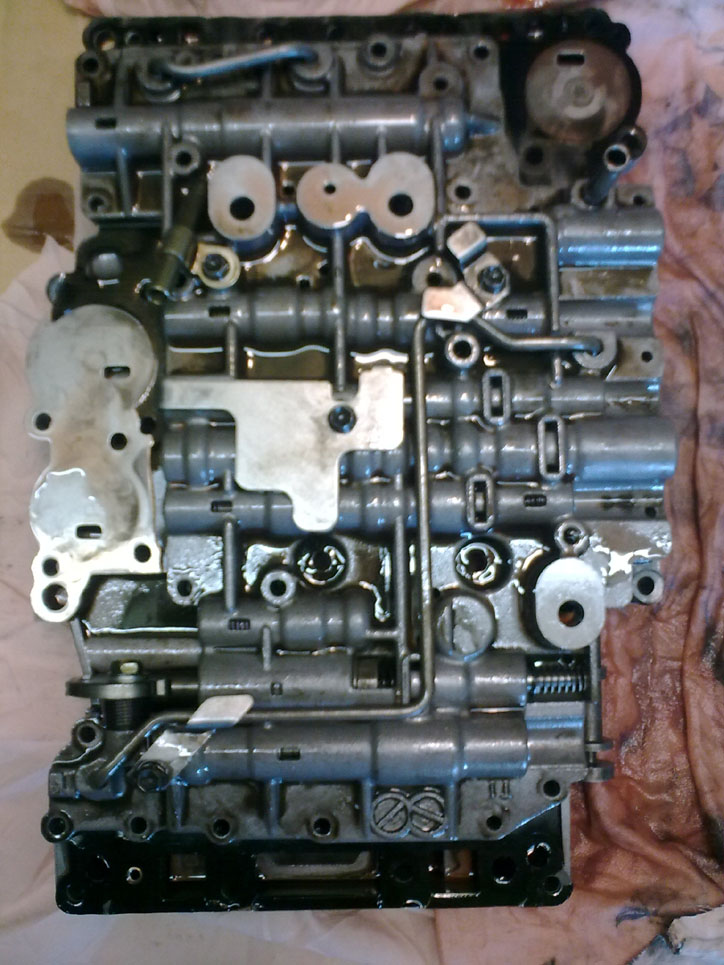 This is the inside of the lower valve body which has a couple of loose parts to fall out: This is the upper valve body flipped with the plate still on top and the old gasket removed. This is inside the upper valve body which has lots of little ball bearings waiting to fall out if you're not careful: Then you just clean up the parts, pop the new gaskets on and put it all back together. You have to be careful when lining up the plate and two gaskets not to lose anything. There are several different lengths of bolts used. The gearbox FSM does document the lengths if you get stuck but I just put them down in the order they came out and then reversed that to put them back.

Next installment for the A442F threads should be rebuilding the main part of the gearbox.

Jon, may I ask just what symptom does this cure. You say that this is a dead auto box. What actually happened and do you know why? It looks somewhat scary but with your usual confidence make it sound very straightforward. Hopefully none of ours will ever fail, but faced with a huge cost for a replacement of unknown condition, is this a typically common fault that we could repair? Obviously there are all sorts of moving bits too which are not covered in this thread. Will you be taking all the other section apart for surgery too?

Until I take the main part of the gearbox apart I won't know for sure what went wrong but the pieces of clutch material floating about suggest sudden clutch friction plate failure. Symptoms were the truck would be able to drive a short distance and then lose drive and it was making a nasty noise even on tick over. It could be that the oil pump failed and that the clutches were a secondary failure. I just thought I'd open it up and see if I could rebuild it or at least take lots of pictures to show what's in there

Taking the valve body off is part of that process and the gasket was cooked onto the gearbox so had to be changed. That gasket doesn't normaly fail unless you have to remove the valve body. I just thought it would be interesting to see if an auto box rebuild is really a specialist job worth so much money or is really a bit of a rip off.

You have to admire whoever thought that up - or programmed the computer that designed it.

That's the sort of job that would keep me awake at night - until I'd done it (successfully) a couple of times.

I wish I had the time to study it properly and work out what all of it does and how it might be tweaked like Wholesale Automatics do. I just thought people might like to see a bit more of the insides of an automatic gearbox and see if we can get a bit of insight into how they work and how they break.

And now I've seen it

I hope mine never goes wrong, it looks like something out of the TARDIS

this has just saved my life- thanks John

I've got the valve body on the bench ready to strip down and replace the torn gaskets (there's 2 right? one either sidfe of the plate?) and thought i'd pop in and see if the valve body has any small parts that need to be cared for.

am hoping that the throttle cable replacement that i've done will have cured the slightly odd problems i've been having, otherwise i'll be stripping the box down and hoping that it isn't too shagged!

Yes Jim, 2 gaskets, one either side of the metal plate. I can't remember how much they were exactly but pretty sure £15 isn't too far off the mark from a Toyota dealer. Good luck

Yea gods will you take a look inside that little box of tricks........think I might take it a bit easier with the auto box now..

I'll be watching this thread with interest, as I also wondered why they were so 'specialist' when it comes to repairs, not that I want to be at the stage where I've got to find out!!!
Andy

perhpas i should note that this was the 2nd or 3d seacrh result for A442f valve body on google!

can't find them in either the FSM or on the EPC

pugwash said:
John- do you happen to have a partnumber for the 4 littel round gaskets that sit above the valvebdoy- called something like a "support gasket"
Click to expand...

35893-36010 are what you're after, in the EPC as 'gasket, center support apply' but not very obvious in the EPC unless you know.
You must log in or register to reply here.