So i have just replaced a bearing NSF and made the childish mistake of forgetting to put the seal on the back before pushing the bearing back on the shaft!!! yes i did kick myself!
So i kindly sent my friend off to Milner to get me another bearing while i cried quietly destroying the bearing taking it back off. After checking the bearing was the correct part number i fitted the new Toyo bearing with the seal this time, also replacing the seals in the back of the housing that let the water in to start with!
Great care was taken around the ABS sensor to make sure it was not knocked or damaged and free from all debris!
Job went well, or so i thought, turned the engine on and my ABS and associated lights came on and stayed on!
So on to diagnostics, i have one of those cheapo ELM327 devices that returned no codes (you get what you pay for!) so i then resorted to the manual diagnostics by shoting out 2 pins on the comms port and it returned 32 on the flashes sequence, quick lookup and this points to ABS, it suggests that the sensor may have sustained damage or may have debris stuck to it impeeding the signal?
So as i am sure you are all aware that ABS sensors do not like being removed, soaked in WD then tried ever so carefully to ease it out but alas only half came out! this led onto the hub being stripped again to knock out the remaining sensor bit, removed the balance that was very stubborn, cleaned all the hole out and then inserted a replacement. While the bearing was out i did check to see if it had a 'Reluctor' ring (new word for me!) or ABS magnetic ring and it seemed ok, i also checked with Milner to see if there was any chance of a mix up but they tell me all their bearings of that type are all the same with ABS, i could feel the magnets by using a needle across the ring.
All back together and guess what, still the same problem!
Took it down to my brothers garage and connected it up to his ££££ tester and it came back with the same fault, i had tried the manual reset (as per manual with 8 pumps of the pedal) but this had not worked, tried resetting on his software and the lights went out! Happy days!!!
On the way home the lights came back on about 1 minute into my journey~!!

Has anyone done this?
I have a traditional scope but thinking about it i need to have the wheels rolling round and thats not so easy kerbside with your scope plugged into the mains!
If i can find the fault i can fix it!

Any suggestions from anyone?

Struggling to remember but i think it was the ABS light that had me tear my 90 apart searching for a fault that wasn't there to find . It was the airbag clockspring .

So following on from this drawn out saga,

I have now learnt quite a bit about ABS!
To diagnose this problem i finally bought another ABS sensor and set it up on my bench, 11v power supply one side and the other side i rigged a 220ohm resistor with an LED to ground. I had 3 reluctor rings to test,
1 that was on the original NSK bearing that i took off
2 this one i messed up on and forgot to put the seal on the back of the bearing before pressing it on (above pic), this was a MAXPART made in China and from Milner
3 this was a Koyo bearing from Milner to replace the above mistake!

NSK ring and the MAXPART showed up perfect on the LED and on the scope, it was clear to see all the segments of the magnets as pulses, this also showed up as the LED pulsed dim and bright relative to the magnets When i took the hub off and tested that in the same way i got a flatline on the scope and no change on the LED. This clearly identified the reluctor ring was to fault.
Called up Milner to query this and they checked all the part codes and said they only stock ABS bearings, both Koyo and MAXPART were ABS type!!
So off to the garage to discuss with my brother and he then showed me a card that can identify the ABS rings! its a bit like the old iron filings principle with a magnet, so i borrowed the card and did some further testing.
Below you can see the 2 reluctor rings tested, the first one shows the MAXPART and the second one shows the Koyo, again this confirms earlier tests and that the Koyo ring is not segmented like it needs to be! 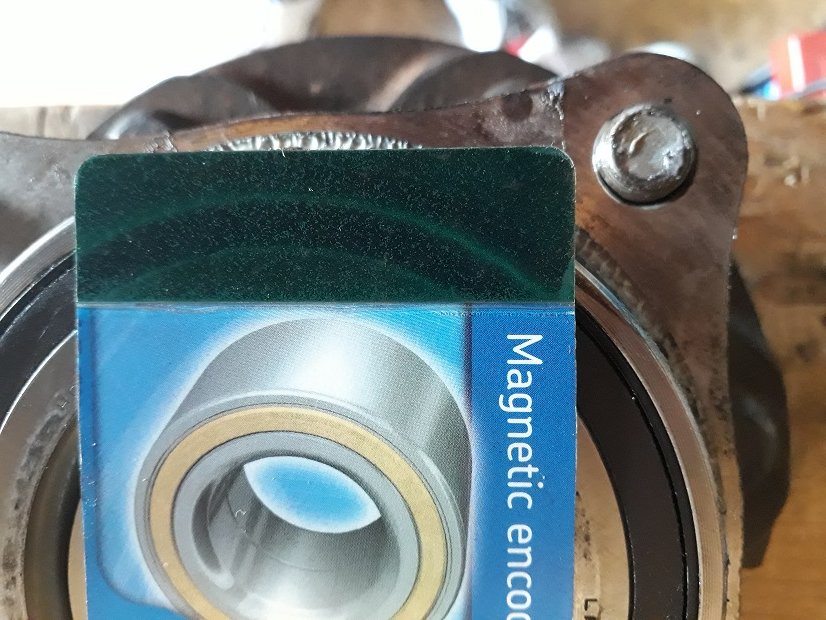 So paid a visit to Milner with all the bits, they got me out several Koyo bearings and they all tested good on the card, they then gave me a replacement bearing, the guys were very helpful and took a picture of the card as they had never see one like it before.
It did seem like the bearing that was causing the problems had got a random wrong ring inserted at manufacture?

So armed with all the stuff to remove the new bearing AGAIN! i managed to swap the MAXPART reluctor ring for the Koyo one, was amazed that they were both the same with one being made in China and one in Japan! makes you think! (the original NSK one was a different size), ended up with a spare bearing! Not that it hadnt cost me in lots of time and replacing the sensor and buying a spare (did use the cheapo ones and they seem fine!)

Reset the fault codes and tested the ABS all works fine!

Only one query really, the workshop manual (extract below) specifies that the voltage is 1.4v forward and 2.6v backwards? i got 1.8v both ways and nothing to differentiate between either way i did cross check this against the original and same result? is it model specific? Why would the ABS need to know what direction you were traveling to apply safe braking and all the other controls? Moral of this one is, dont believe what you are told unless you can prove it! its worth checking to avoid the hassle later, i now have my own bearing checker!

Hope this info helps someone,