At approximately 2200 last night i received a phonecall from an oppo of mine who owns a 90 which he has just bought as he is keen to get into the offroading/greenlaning game. unfortunately he was roped into attempting a lane in hampshire called water lane by a friend of his who rides ktm bikes up and down it.

being both rather foolish and inexperienced they decided to go it alone and got themselves stuck halfway down it on a step, they are hung up with a large tree root snagging a crossmember and both front wheels hanging into space. the rear wheels are running the original road tyres and as its a prado it has no rear locker.

i couldnt get my 90 down to it from either direction as the lane is narrow and with my limited articlulation the angles i was leaning over at were doing quite a lot of damage. in fact i will now need a new rear bumper.

I called it quits at approx 0200 last night and we were there early this morning with high lift jacks (not that it has jacking points) strops, hatchets saws etc

Long and short of it, after a full day of trying, it hasn't moved an inch, this is the second night it has been stuck out there halfway down a greenlane and obviously Paddy is getting a wee bit frantic.

Thus this is a plea for help from anyone in the area as i am out of ideas!

P.S The lane is called water lane, in a place called Farringdon near Alton, Hants.

Is this Water Lane, Alton?

Oh yes, would you take a completely stadard 90 down it, with road tyres having never offroaded before!

I am working tomorrow but then off till next week so more than willing to help if it can wait till the evening, i can probably get a chainsaw too if it would help.
Let me know.
Don't like the adverts?  Click here to remove them

Can you give me a location? I know of Water Lane that runs from Alton to West Worldham. Is that the one?
Can I get the 80 to him?

It's the very same one, the greenlane is full of golf balls in fact. It's off the a31, not far from Bordon Camp.

It's quite narrow for an 80 but they say Range Rovers go up and down it. You would be able to get there, particularly with your clearance and articulation and then winch him off backward i guess. It is horrendous with water, and quite overgrown.

What i really need is for someone with more experience than me to assess the situation.

I have to go to work tomorrow (unfortunately) but I could try and leave early and take a run down there tomorrow evening. I'm probably an hour's run from Alton, so could be there for 5-6pm.
I'm happy to help, although my 80 is marginally less capable than Ian's

I can also provide some manual labour if that's what's required

Really appreciate the response guys, will bring beer to Lincomb!

I am about 20 minutes away. Driven that lane loads of times - not recently though. What is the current situation? I can head off there now if needed.

I can be there in 40mins mate, words cannot express gratitude!!!

Currently, vehicle abandoned halfway over the step, which is approx halfway down. Needs to be recoverd from rear to avoid further damage and then either the log needs clearing away to allow him to get down the step or he needs to back up all the way out, which would be an epic reverse!

OK, did he go in from the golf club (Alton) end?

The only end i have been in myself is the one where you go under the Road Bridge and the turn is immediately after...

He went in from the other end!

Getting in car now

I'll meet you at the end he went in from if he needs recovering from the rear.

Ian has my number - please shout if there's anything I can do.

Oh dear, not the best of lanes for a newbie to have a go at

Here's a few pics from that section going up hill to keep you entertained till we hear more, have a good look at the line of my bull bar, the trucks in front and the trees and see if you can work out which way is up 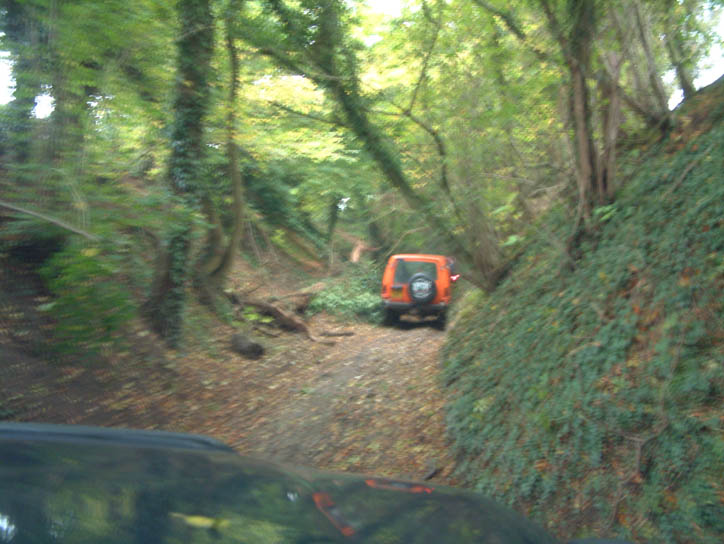 In the second to last picture the red car at the front is trying to get over the suspect step and you can just see it's roof even though he's quite a bit higher up than the camera ... One of my favourite lanes still open to us for fun factor but it's not really a newbie lane.

Before anyone points out I was following some LR's, we swapped places a bit after that and the orange car fell over trying to follow me

Jon, surly you were on 2 wheels 'General Lee' 'Dukes of Hazard' style

Well we are back and they are out. Very well stuck on a big step, a double line winch with mine strapped to a tree did the trick. Then a long reverse over the side slopes in Jons pictures.

No photos, it was dark and raining.

Well done guys.
You must log in or register to reply here.

A little weeding during Lockdown . . .