Auto folding mirrors on the 150

Right, I launched the 150 into the 20th century with auto-folding mirrors

They asked for a photo of the back of the mirror cluster so they could send the correct loom.
I sent this and it was sufficient. 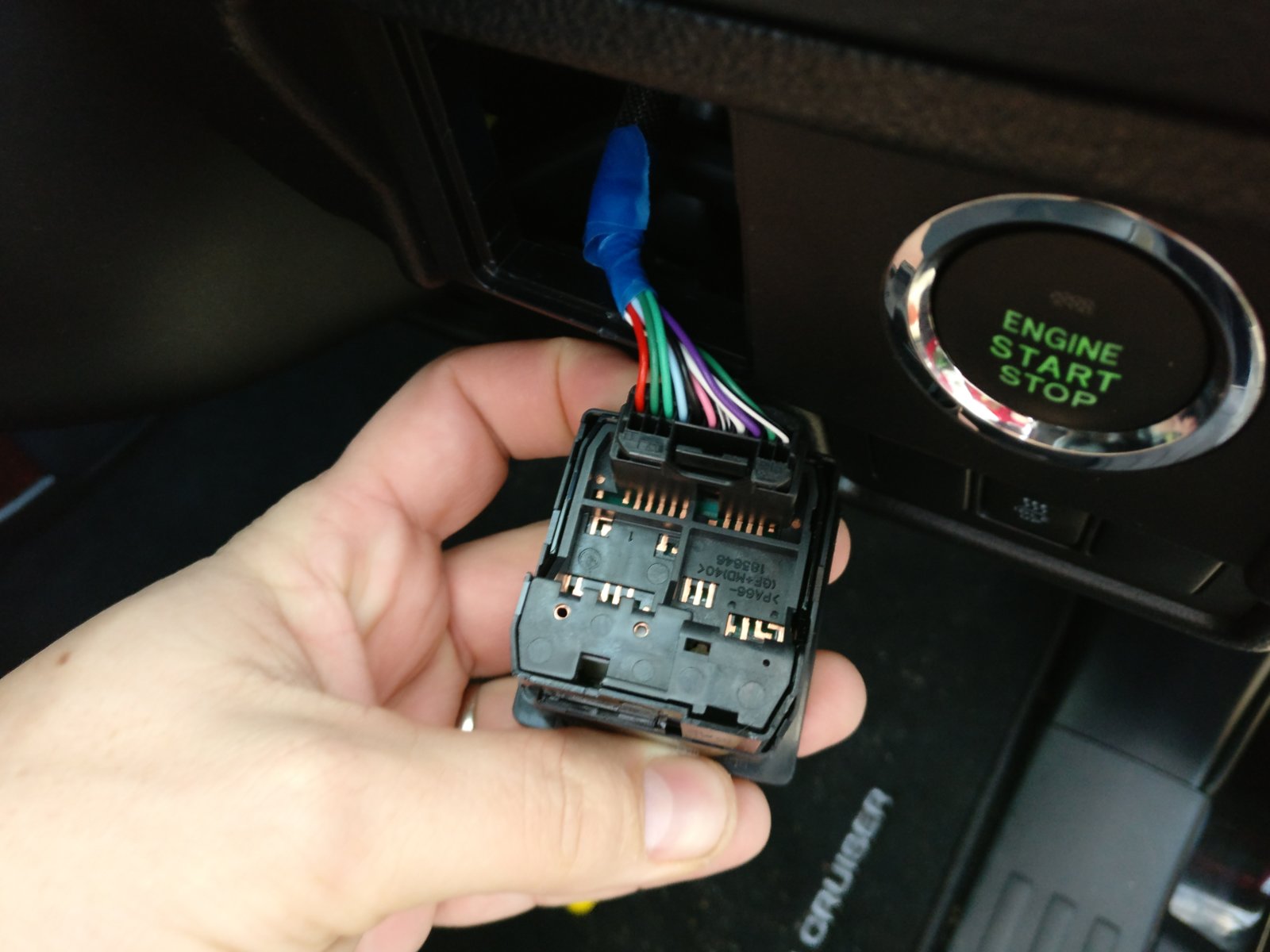 The module arrived within a week which was pretty impressive. 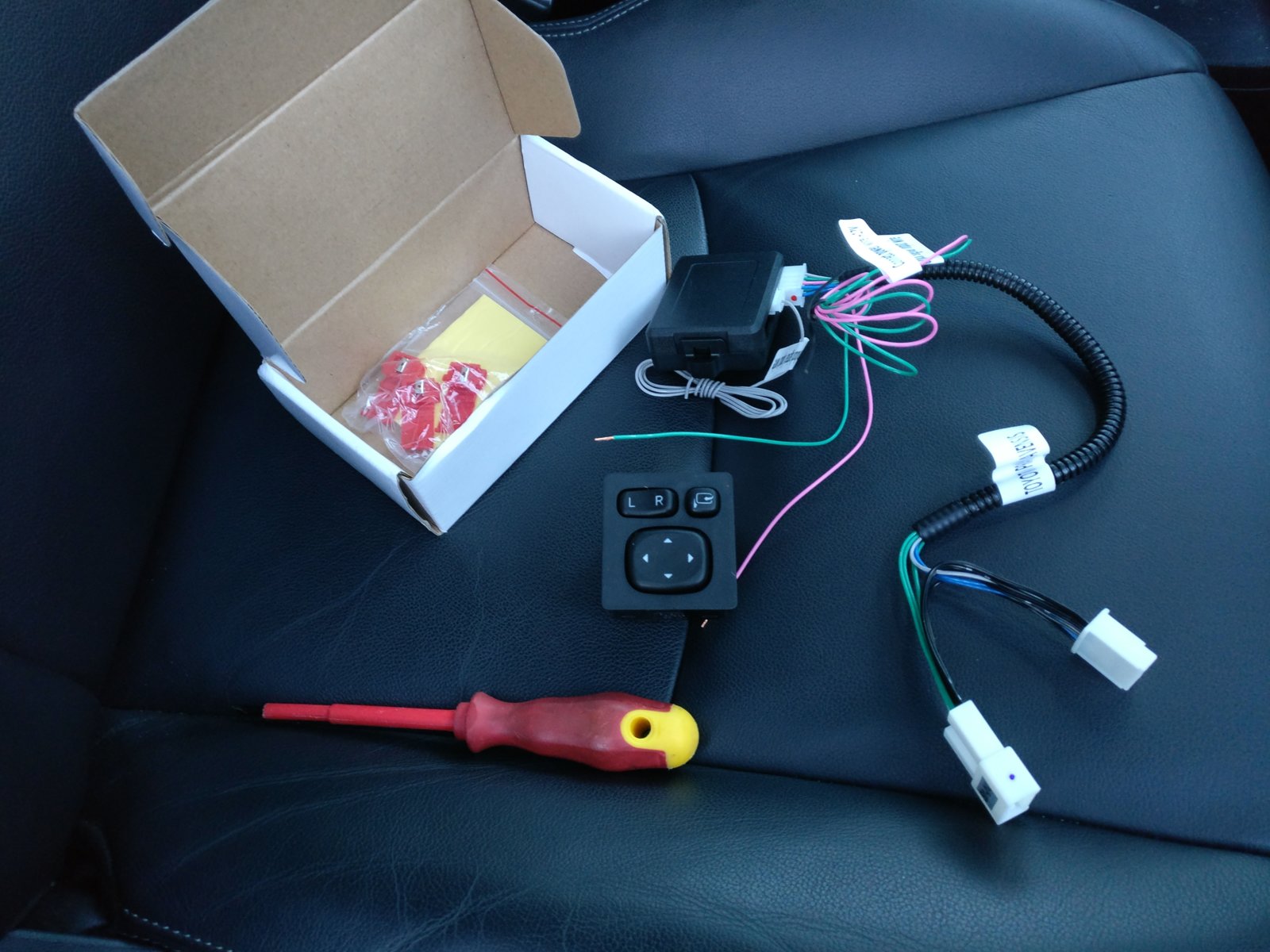 Cluster out, loom adaptor in between and you can put it all back (Forgot pic )

Remove the kick-panel in the driver's foot well.
Next to tap off 12V (non-switched) which was easy enough - came off the door-control plug. The next bit was a bit of a faf and took me a while to find as there are many wires and no instructions.
You need the lock pulse and the unlock pulse for when the doors lock and unlock. I thought I had found it on the white plug and after convincing myself it was correct and the module was broken I realised they were for the indicator flashes.

There are 4 plugs - going down, a black one, white one, grey one and yellow one.
The 12V can be tapped off the thick red wire on the white plug. The lock and unlock signals are on the upper black plug. While plugged in, the bottom row of wires, the green and blue ones. (Blue one pictured above) Tap those off, hold close the door switch and arm the alarm.
Like a 21st century car the mirrors whirr into action

Auto-folding mirrors on the Land Cruiser (Prado) 150
I would love to understand why Toyota does not do this as a factory option. It would be even easier to do it in-house as it's all CAN-bus anyway. Ho hum.
Last edited: Jan 15, 2017
Reactions: Prado150RD and hamba

Is this the first mode, did 8 win the bet?

It amazes me that Toyota don't do this as standard. Welcome to the Landcruiser auto folding mirror club (currently at 2 members)
Reactions: Crispin

maybe 3 if i get a kit on order.
Reactions: TonyP

silvercruiser said:
maybe 3 if i get a kit on order.
Click to expand...

Have a chat to them. For the price you cannot complain.
Reactions: silvercruiser
Don't like the adverts? Remove them by becoming a supporting member.   Click here

silvercruiser said:
maybe 3 if i get a kit on order.
Click to expand...

Worthwhile mod. The kit I use has a selector switch which I can return it to normal non-folding modeon lock/unlock if need be, not that I ever do
Reactions: silvercruiser

Thats awesome. Gonna have to add that one to the list
P

Do Land Cruiser Invisible not have auto folding mirrors as a standard? I was not aware of that. I joust bought one...

I think i can get auto folding mirrors to work on my 80, is the lock pulse just that, ie, a 1 second pulse or less?

Yup, apparently so. I did not measure it.

Email them and ask.
P

Crispin said:
Nope. Not when you lock it. At least, not on the LC 4.
Click to expand...

I had no idea. So, buying this kit for my 16 plate Toyota Land Cruiser 2.8 D-4D 4X4 Invincible (177bhp) 5-Dr (I have no idea what the LC4 you are referring to is. Do I have the same model?) will give me folding mirrors? I am absolutely useless with doing that kind of work on my own, so I most likely will end up paying a garage to do it for me. Unless a kind fellow member who lives in the North West and knows what to do volunteers...

Yup, it should work. Yours in the Invincible (aka - LC5) whereas mine is the LC4.

As for installation - a local garage should be able to do it for you. Less than an hour. Two max.
P

Crispin said:
Yup, it should work. Yours in the Invincible (aka - LC5) whereas mine is the LC4.

As for installation - a local garage should be able to do it for you. Less than an hour. Two max.
Click to expand...

Thanks for that. So, which is the part I need to purchase? Is it the same with yours? You mentioned they asked to see a picture of your mirror. If they asked me the same I would not know exactly what to take a picture of...

Thanks Crispin for the pics. Made it super easy. Done in about half an hour

I want to find out how to enable the chirp on mine. EU law says cars are not allowed to chirp when arming alarm (it was a quiet day in the office when they decided that) so they disabled it on eu ones.

Think it's time to get the techstream out.

Yeah I need to get techstream so I can do the Windows and sunroof thing on long hold of the FOB. I got carista and a cheap OBD2 dongle but it was so cheap carista wouldnt recognize it properly. Other apps were fine with it though.

There is a long thread by TonyP which details how to get techstream working.

Hi Gasmanjc, how do you find that snorkel? I'm looking to get one fitted and I really like the look of the tjm airtec.

Hi hamba. I have had no real issues with the snorkel. Only real negative I've heard although never actually spoken to anyone who has had the issue is that on very deep water crossings (over the bonnet) water "may" go up the windscreen and into the snorkel. I think if you you're going that fast into deep water you might end up with other problems . I have seen the safari type snorkels get their heads ripped off etc though as they hang out a fair way.

For me the decision was about aesthetics in the end. I just wanted to try and keep the lines as clean as possible if that is at all possible