...........someone please help stear me in the right direction I've been searching for most of the evening for information on adjusting the caster on a Collie but to no avail It was after reading a post by KZJ90 with regards to adjusting the caster to it maximum forward tolerence to gain upto 15mm more clearence between the tyre & the rear of the front wheel arch. But I can't find a thing Is the caster adjustable & if so whats to process

If not do I need correction bush's/bolts

Noop Had another look around this morning & still can't find anything

No one know then

I´m not talking about spacers. Only adjustment. There is caster/camber adjustment (eccentric plates) at lower A-arm mounting points.
Click to expand...

Forget the spacer now, it won´t move tyres forward - only downwards. Only wheel alignment can give you an extra centimeter.

'To get a lttle more clearence on the front of your Prado 90, get your wheel alignment guy to adjust the castor. This adjustment actually moves the wheels forward thus giving more space at the rear of the tyre where they tend to rub at the buldge in the mud flap'
Click to expand...

Come on own up if you have

How did it go

I'll talk to you Steven, don't want you being Billy No Mates

Can't help you though as my missus would only let me do servicing on her 90 and now she has the 80.
The best person to ask would be Chris.

By the way, how come your second post was before your first????
B

I expect that this will get some comments, but from what you posted from the Prado forum is a load of twadle. The Caster will not move the wheel forward as you want it to. What they are doing to get that sort of clearance is with a whole load of tow-in, then compensating the tow-in by adjusting the track rods. The problem is that the caster is also done from the same cams on the lower wish bones and it is an a**e to set up for normal use let alone doing something like that.

Think of it like this, the pivot point for the wheel are the uper and lower ball joints so when yo turn the steering wheel to the left the left wheel moves backwards as it turns the right wheel moves foreward due to the fulcrum position in relation to the wheel. What they have done is to move the pivot point forward by having the forward arm of the wishbone as far in as possible and the rear arm as far out as possible. I have not measured it but I would say that it is not going to give you that much extra and I thinck that you will not be able to get the caster correct and cause heavy wear on the tyres.

Hope that makes sense. Basicly if you need more clearance in the wheel arch....cutting the wheel arch is about the only option unless you are a serious engineer and move the upper and lower wishbone mounts forward along with other related componants.

Anyway here are some pictures of the cams that they are on about. Stephen, if I knew, I would have replied by now. Sorry Buddy, but never messed with any of that. We've discussed this topic before, you and I and I know that Steve is one of the few who has replaced those bottom bushes and it was a t**t of a job if I recall.

However, Steve in addition to the body modifications that you suggest, you can fit top spacers to the strut which push the wheel down and forward but you can only fit those if you haven't already done a suspension lift. Stephen and I have also discussed this in the past.

My thought it to try fitting some 255.85.16 The much narrower profile might give you that cross tyre clearance that causes the problem on full lock. It's the edge of the tread that catches.

Where is the EDIT button

Actually what I wrote was a load of twadle

Tow in and towout are done on the track rods and those cams are the caster adjusters.

Apart from that what I said they are doing with the lower wishbone cams is how they are doing it. And I still think it will through the Caster out to much.

Why do you feel that this adjustment is not possible then

I got to say its interesting that the LC suffers in exactly the same way as a Vit when lifted & larger rubber is fitted. They rub in exactly the same place & the only way to stop it on the Vit is to trip/bash back the lower section of each footwell seam & trip 4/6" from off of the lower part of the rear of the inner plastic liner

Here's a link to the detail about the modification http://www.zukiworld.com/month_120102/f ... endmod.htm
B

Are time for another picture.....The pictures above are form when I first fitted the new bushes and cams and the witness marks on the cams are taken from the old ones so that when I replaced them it would be nere enough as was. As you can see they are as near as dam it central. Now as I had done the suspention lift of 40mm I knew that I had changed the geometery of the front end and would need to re-align things and the picture below shows you by how much it was.

The cam is now 90 degrees from its origanal position and is on, for want of better words, the full out position. And that is just to get the caster correct from doing the suspension lift so that means there is nothing left for moving the wheel pivot point forward.

I will be honest and say that I have not tried fitting larger boots on mine, it maybe that if you get the tracking done after the lift that a lucky side efect is being able to fit larger boots. 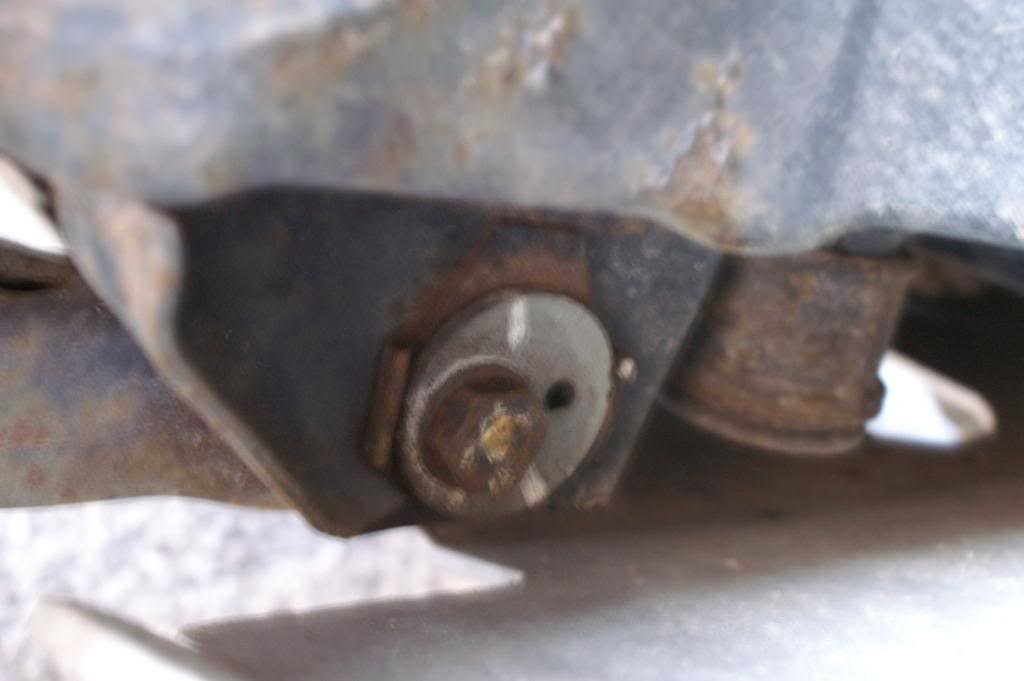 To be fair I had to have a second look @ it

The edit button was well gone by then

The edit button was well gone by then
Click to expand...

Stephen, if I knew, I would have replied by now
Click to expand...

I know you would have

Sorry Buddy, but never messed with any of that
Click to expand...

I'm considering the caster correction modification before I have to consider cutting/trimming/removing any mud flaps, plastic liners & or foot well seams. This is why I've not rushed to get Lil-Blues sliders that you (Chris) sold me fitted as until I know if I can keep my mud guards or not (and I do want to keep them) I don't know if I need to shorten the sliders or not as you made them to fit without mud guards

So a big waiting game here in Chelmsford

Back to the caster correction

Worth doing or not then

and how much were they

Would you not agree sae70 said:
So BlackWidow the new cams/bushes are they an after market item or something that is original fit

and how much were they

Would you not agree

You are not going to like what I say now Steven especially after all that cleaning off that you have done. We (thats my local Toyota Fitter and I) decided to check the Caster and traacking after the SL and it was then that we found the Cams had siezed on the bushes. The Cams pass through the bushes with a solid tube and the bolt is inside that all of which had welded themselves together. Once this happens the Cams are not man enough to be worked free and invariabley snap as mine did. So that is why I changed the lot.

The Bushes are from Pro Bush.....who by the way now do a full bush set for the 90 + 95 thats ALL bushes through out. The cams are from Toyota. As far as I know no one does the Cams for Toyotas. I can't remember the exact price of the Cams but I think they were about £50 each, I will dig the bill out later and let you know.

What was i trying to say about the caster? Well when we set up after the SL and new cams and bushes we were on the limits of the cams just to correct the caster, ie: both front and rear fully out or near enough. This means that if you pull the front arms in to move the fulcrum forward then you will not be able to re-adjust the caster thus creating wear on your tyres.

Having said all that we were seting the truck up and keeping it within Toyota spec (which we did) and I can confirm the 90 + 95 will take a 40mm lift from manufactorers height and still stay in spec with a bit of tweeking. So what you are sugesting may be possible to do and if you can afford taking the chance on scrubbing the tyres then give it a go.

BlackWidow said:
The Bushes are from Pro Bush.....who by the way now do a full bush set for the 90 + 95 thats ALL bushes through out. The cams are from Toyota. As far as I know no one does the Cams for Toyotas.
Click to expand...

Do you mean SuperPro? And would that mean that the bushes from Milner Offroad are fabricated by SuperPro?
B

Yes sorry SuperPro and yes I do think those are the ones mMilners supply as they are identical. Chris (Great White) may be able to confirm this for us as he lives just up the road from milners and has a good relationship with them.

BlackWidow said:
Yes sorry SuperPro and yes I do think those are the ones mMilners supply as they are identical. Chris (Great White) may be able to confirm this for us as he lives just up the road from milners and has a good relationship with them.

I got an answer from Milner´s today: "We are not allowed to tell who our suppliers are - otherwise people would probably go direct to them! We have our own racing team who use our bushes and they are happy with them."

BlackWidow, have you liked your bushes or not. Would you recommend those? I read that they were worn fast, is it true or some quick conclusion of something...?

Being a bit daft not saying who makes them. It's not like the name SuperPro is a secret. We can work these things out!

Chris
You must log in or register to reply here.