As readers of my other threads [mostly in the 90 Series section] will know, I'm currently on the quest to find a decent [as in not a rot box] Colorado / Prado, or 120 Series. As most of the descriptions in the ads seem to be written by people with a keen eye for romantic fiction, even armed with a healthy dose of innate scepticism and the MOT History website, I'm finding it hard to sort the wheat from the chaff... or should that be the chaff from the even chaffier chaff?

So I thought I'd try and recruit some of you smart folks as additional pairs of eyes. As and when I see them, I'll post some motors in this thread [and a similar one in the 90 section] that sound passable and see if you guys, who have the advantage of actually owning some of the damned things can spot anything good, bad or ugly. It's not actually ever failed the MOT on corrosion, but the history is littered with all our old favourite advisories:

Seller's description reads: "full underbody protection. ... Full MOT with advisories addressed" which the cynic in me interprets as "We've slapped a load of Waxoyl over the rust". However, in a rare break with tradition, the seller has actually included a pic of the underside [albeit not a very revealing one, as it's not around the rear axle]. So what do you think?... That main chassis rail doesn't look too bad. But who knows what's being covered up there. But the cill at the right edge of the piccie looks pretty disintegrating to me.

For what it's worth, in another rarity, there's also a piccie of the engine bay. Anything leap out at anyone from that? Does that bonnet front edge look corroded to anyone else?... Might be doing that motor an injustice but a few things stand out.
Wheels appear to have been painted, pity to have destroyed the lovely original finish, maybe too mch salt damage.
Chassis rails look like they've had some wob applied but missed the fuel tank protector, be interesting to see the back axle.
Which brings me on to the underbonnet pic, rust on the bonnet where the grill attaches? rust on the the edges of the strengthening by the intercooler intake? evidence of salt corrosion on the fuel filter primer and housing? is that rust on the bulkhead just behind the brake master cylinder? not saying its a bad motor by any means but given the MOT advisories it looks like its seen a lot of road salt which hasn't been cleaned off regularly.
Why are the positive terminal insulators both off, flat batteries?, been stood around waiting for a buyer?
Cambelt due at 90k ish, has it been done, its an easy peasy DIY job with a full kit costing under £100.

Have you thought about buying a banger to run around in for the time being and getting a grey Prado imported direct from Japan, TradeCarView used to be an interesting perusal to see whats on offer.

I'd given up trying to find a minimal rust example and was getting close to going the grey route myself, fortunately the present LC5 popped up online one morning when i wasn't actually looking and within a couple of hours i'd bought it because it was in such good condition.
D

Crusty as, underneath as well as the engine bay.

Bugger, was in Wakefield today with plenty of time.

Stu, there are a few things to consider when searching for a 120. Early ones had the Collie derived 4 spd auto. they changed to 5 spd auto with engine upgrades sometime in late 04 I think.
I'm sure someone will come along with all the variants and specs.
I went specifically for an 05v LC4 with underslung spare. Once the search was on I bought the 10th one I viewed, highest mileage, most owners, self maintained since 2011 but crucially best underneath by far, best driver seat and steering wheel, quietist engine etc etc.
I wouldn't expect too much when viewing 120's, they are old, just like Collies, its just a patience job.
All wheels will need refurbing by the time they get to this age and if the injectors hav'nt been changed they will soon need doing.

Having had a good D4D Collie VX and a V6 Collie too there's a reason why an equivalent 120 is twice the price of a Collie! I really enjoy driving mine.

Good luck with your search.

Thanks for the replies folks. I think I'll give that one a miss. I was slightly dubious about it anyway, before casting round for 2nd opinions.

That's the good thing about forums such as these. People who have owned the vehicles and know where to look can spot things straight away that someone like me who's shopping for their first one can miss. T'was the same when I had my previous VW Syncro. I was involved in a forum for owners of those and people would regularly post pics of ones they were interested in. Quite often, me and other forum members would spot really obvious things that the potential buyer had overlooked. Just because we knew the vans and where the trouble spots were.


AndycruiserguyLomas said:
Bugger, was in Wakefield today with plenty of time...
Click to expand...

Wasn't it you who said you'd seen the Rotherham one too? I think I'll have to hire you as my official representative in Yorkshire!
Don't like the adverts?  Click here to remove them

Yep, I know the Dr who owns the silver Collie.

Here's another one. Not quite another Yorkshire lad this time. But not far off; Dronfield in Derbyshire [can't say I've ever heard of it before]. Anyone in that neck of the woods? Anyone know anything about this one? The MOT history is pretty good. And it's a manual too which, even though I'm being converted to the joys of the auto box, deep down I'd still prefer... Oh. By the way. If anyone is near any of these ones I post and is up for nipping over to take a look at if for me, I'll be happy to cover your petrol/diesel costs and the price of a pint or three on top. If it'll save me making a wasted journey.

AndycruiserguyLomas said:
Yep, I know the Dr who owns the silver Collie.
Click to expand...

Whoops! --I'd better be careful what I say then!

Ha, met my mrs in Dronfield would you believe. I pass through there on a Tuesday so if its there I'll have a gander for you.

Wow! --That would be great. Cheers Andy!

No worries, it strikes the fear of God in them when I get out of a Cruiser and put my " AndyCruiserGuy" embraided overalls on and say " right, lets have a look then".

At present I'd give it a 5% chance of being up to your/my expectations.

AndycruiserguyLomas said:
No worries, it strikes the fear of God in them when I get out of a Cruiser and put my " AndyCruiserGuy" embraided overalls on and say " right, lets have a look then"...
Click to expand...

Ha! Ha! --Yes. Filthy overalls, latex gloves and head torch are always a good psychological weapon, when approaching a potential motor purchase. I haven't had mine monogrammed yet though. I'll wait til I have something better than "Compulsively Reloading the eBay Listings Page Guy" to put on them.


AndycruiserguyLomas said:
At present I'd give it a 5% chance of being up to your/my expectations.
Click to expand...

I'm such a natural pessimist that sounds like wild optimism to me.

Another manual listed on eBay today. All of a sudden they're coming out of the woodwork! And another one in a place I've never heard of "Mamhilad" which, in spite of sounding vaguely Arabic, Google assures me is in SE Wales.

Usual scenario of looks lovely inside and out, but no photos of the engine bay or underside and the obligatory "Rear Suspension spring mounting prescribed area is corroded..." advisories on the MOTs. I've emailed the seller to ask for more photos. Let's see if he responds. 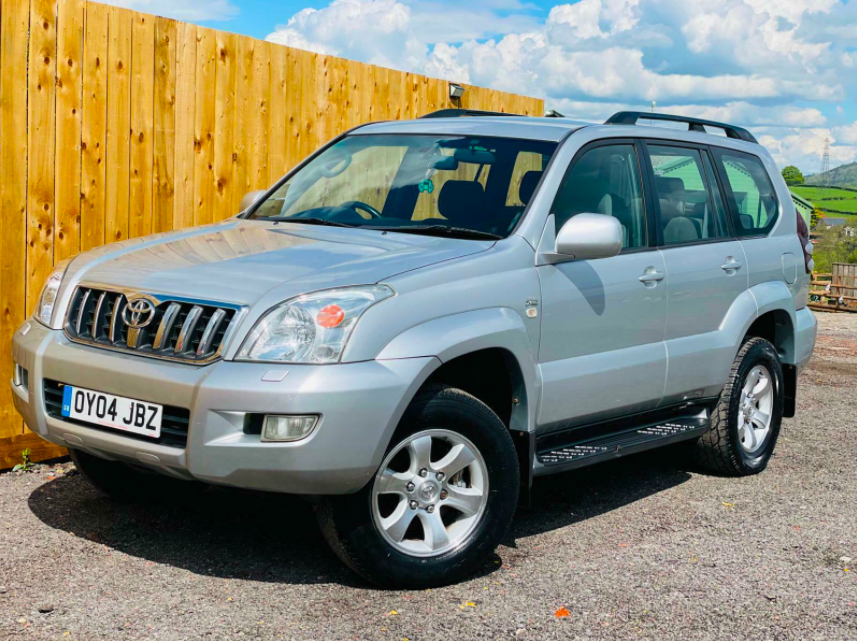 Stuzbot's search for a Cruiser that doesn't have serious rot issues has got me looking at 120s again, mainly in the hope we might find something for him that he might think is worth spending the extra over a 90/Collie.
Been checking the MOT histories of a few possibles, bleedin heck they make grim reading, as do the prices being asked for vehicles that are going to cost increasing amounts of welding wonga to keep them on the road in the forseeable.
Keep thinking i've found something worth looking at for Stuzbot, 2 mins later another discard.
J

hell fire i can't get the right header to copy and paste.
Facebook marketplace 2004 manual 120 in silver 140k miles £4750 Dunmow Essex, hope someone else can link it cos dumbo here can't manage.
LM04PZJ

This looks worth a look, MOT history is one of the best i've ever seen, be quick if interested even though its a lower spec model (less to go wrong) i doubt this will hang around.

Juddian said:
Been checking the MOT histories of a few possibles, bleedin heck they make grim reading, as do the prices being asked for vehicles that are going to cost increasing amounts of welding wonga to keep them on the road in the forseeable.
Keep thinking i've found something worth looking at for Stuzbot, 2 mins later another discard.
Click to expand...

Welcome to my world!

This is pretty much how I've spent about the last month; sitting here with two tabs open on the browser. One is eBay / Gumtree / Autotrader, whatever. the other is the DVLA's Check MOT History page. It's unbelievable how many of these Land Cruisers [or whatever model] look absolutely pristine inside and out but have a litany of advisories for underbody corrosion on the MOT history.
J

If you can find that 04 plate Maldon car i've not seen as clean an MOT history on anything (except maybe my old Hilux sold in 2010 or 11 which i keep an eye on) for years.

Juddian said:
If you can find that 04 plate Maldon car i've not seen as clean an MOT history on anything...
Click to expand...

That is a pretty impressive MOT history. Hopefully someone can post the link, as I'm not on FB myself.
K

Its the one on ebay you posted on the other thread isnt it?
You must log in or register to reply here.

Headlamps and Grille Botched Together. How Should This All Fit?
2