Now I know that I am walking in everyone's footsteps here in fitting a snorkel, but doubtless there will be other following me too - whilst ever there are 80's around that is, so I figured I'd stick some pics up.

I started by removing all the standard gubbins of course at which point the boom bottle fell inside the wing. Next came the template fitting. I wasn't sure whether to contour the card to the wing or lay it flat cross the high points. In the end I went with contouring it and it seemed OK in the final analysis. Template on, I lightly punched the holes and drilled them with a pilot at about 4mm then opened them to around 8mm 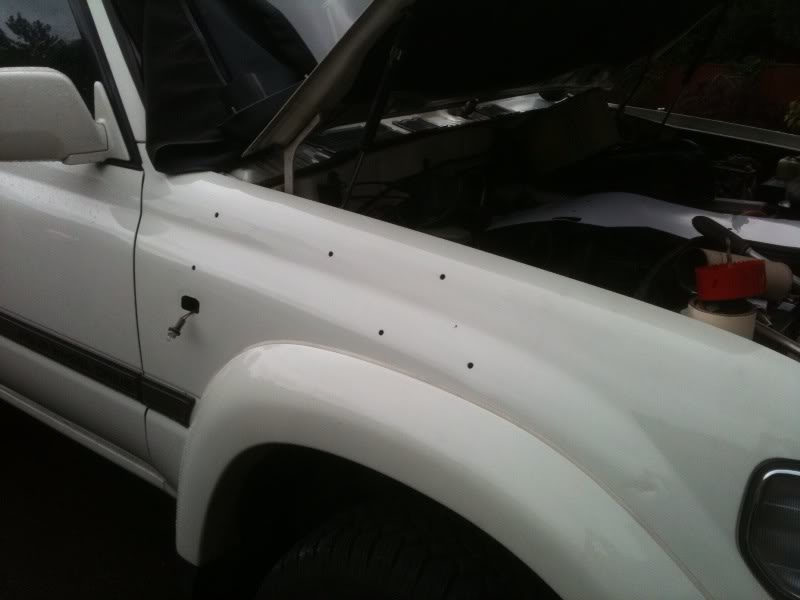 Then I had a cup of tea before the big one. I had my lad spraying cutting fluid onto the hole saw which seemed to make a nice job of it. All de-burred and touched up to prevent rot. 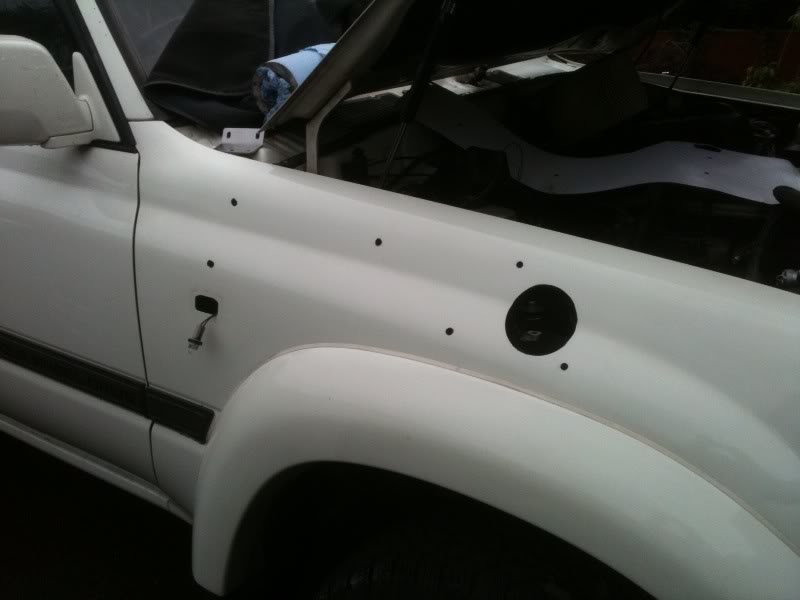 You can drill them all out to 14mm like they say but I reckoned on a bit more precision than that. I had to slot the windscreen end pair a little as they were almost one diameter out from the template.

Following JW's advice I rivnutted the bracket with some 6mm cap heads. Much better then plastic inserts and self tappers I put some self adhesive foam strip, like draught excluder around the inside of the snorkel before mounting it. This ensured a snug fit, no chance of rattle or rubbing.

Got to say that the finished line is 100%. Couldn't have been better really With the tube rivnutted it really is solid.

A huge thanks to my 15yr old Lad without whose help I could not have got the last nut on up inside the wing. Ratchet spanner once again saved the day tightening them all up too. Good tip from Ecky on taking out the side light to get the jubilee clip tightened on the rubber connecting hose.

So there we have it. No longer standard! Side steps have gone in anticipation of Lincomb. They would only get bent.

Hi Chris, Excellent write up, just one question did you treat/paint the holes before fitting the snorkel.

Locrep said:
Hi Chris, Excellent write up, just one question did you treat/paint the holes before fitting the snorkel.
Click to expand...

Nice write up Chris, how much of a job do you think it will be for me to remove my snorkel and touch up the rust (yes some idiot before decided that there is no need to paint bare metal) and then refit it so that it the snorkel fits perfectly along the crease (it currently doesn't and the gap just fills with leaves)? is it easy to get at the bolts inside the panel if they are rusty?
Don't like the adverts? Remove them by becoming a supporting member.   Click here

Nice one Chris, those two nuts above the wing indicator really are b'stardos to get to aren't they.

I put a bead of Black silicon mastic around the inside edge of mine to stop the rain 'sitting' behind the snorkel... I guess the draught excluder on yours will do the same

Actually Paul, it won't. It's not continuous nor is it actually watertight material as such. I think I shall copy your idea and put some sealant along the top to check the water. Shouldn't really be a problem, but I like the idea for a professional finish. Thanks.

Yes, it's painted up to stop it rusting - quote 'All de-burred and touched up to prevent rot.' I used some acid etch primer first and then a top coat of cellulose touch up paint from a stick. Looked pretty well sealed.

Rob, snork removal. Hmm. I have a feeling that the fixings were stainless and inside the wing they shouldn't have had too hard a life. Getting to them is no biggie. With a 13mm ratchet flexi head spanner you can get to the two end ones. I did with my massive fists. OK, couldn't get the nut on by my self, but tightening it was easy. If you move it around, remember that you may have to adjust the A pillar bracket position too.

I still have the card template if you can't get hold of one. So you can line that up and see what's what. Relieving the right hole can make a world of difference in the final fit. If you just make huge holes, you will achieve a perfect fit. But something about making a 14mm hole for a 6mm stud offended me. Oh, I also thread locked the studs into the nuts on the body. Just to be sure.

that template would be great, could you bring it to lincomb Chirs?

I shall try and remember it, along with all the other bits and pieces. Feel free to send me a reminder before the day!!

Thanks Chris, BTW you seem to be missing a panel along the bottom of your windscreen

No I'm not. I know exactly where it is. Thanks Rob.

The wiper turret went all flopsy and the arm flailed about damaging the scuttle. The previous owners of this 80 have been a mixture ranging from those who took it to the dealer to check the tyre pressures and those who didn't give a s*** about it, banging parts on with a chisel just to get it through its MOT so that they could get rid of it. I have got pretty close to the end of a pretty long work sheet on it now and most things left are small jobs. OK BEBs and front diff bearings are two larger ones, but the front scuttle went back in this afternoon. I don't have body work skills, so I have had to simply patch it up the best I can until someone could professionally repair the dent caused by the flailing mechanism.

I took the advice of many who said, "buy the first good one that you see". This is a good one, but I knew that 'good' for a 16 year old Leviathan was a relative term. I must have spent £500 so far on parts etc to get it straight. If I had bought some of the others that I had seen, I would have spent probably the same as they were asking for the vehicle. I paid £4100 for GW and I could probably have got them down a bit more if had really has a brass neck. I know what HE paid for it. Man, I wish I had got it for that. But, for the sake of a couple of quid, I could have lost it. No doubt it would have gone to the next buyer. Been a good learning curve though. But buying an 80 can be a fairly perilous job for the unwary. I saw trucks at £4500 plus that might not have made it off the forecourt. Ok they would - they're 80's but the work involved? Phew, they were scrappers really.

Seem to have hijacked my own thread!!

Thanks Andy. Wait til the rack comes - it's in black too.

When I get the wheels refinished, in black, it's going to look quite smart. Black bumpers and sliders too. At least then maybe kids won't stop me anymore wanting ice-creams.

Good Job Chris, now do you want to fit mine? I have only had it for 2 years!!!

You mark it, I'll drill it!

Well with not having it fitted it is keeping me out of deep water!! I will get around to it one day!

Re my post on the indicator, any guesses what I'm doing tomorrow morning?

Admin - is it worthwhile posting this on on the sticky list at the top of the 80 section?