I know I'll never use it

Wanted the rear steps but couldn't help buy the BBQ!!!' 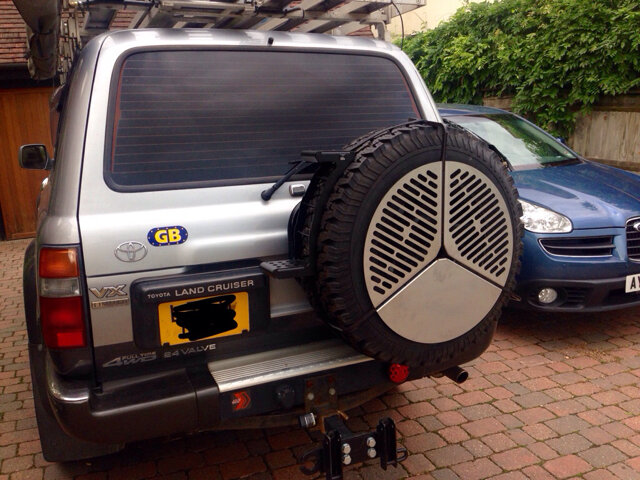 Sent from my iPhone using Tapatalk

That is the VERY item I am after. I just can't bear to pay the APB price for it.
Don't like the adverts? Remove them by becoming a supporting member.   Click here

Chris said:
That is the VERY item I am after. I just can't bear to pay the APB price for it.
Click to expand...

£80 notes from John Craddock, not to bad.

Well that's better than APB by a tenner for sure.

CJ I'm surprised you've not made one with your skill set. And you can probably do a better one too

Stainless Gary and it folds and ....

So yes for £100 against my time it's cheap. But for something made in a factory in Indonesia for about $10 it's stupid. I want one before we go though. Somehow.

Chris said:
Stainless Gary and it folds and ....

So yes for £100 against my time it's cheap. But for something made in a factory in Indonesia for about $10 it's stupid. I want one before we go though. Somehow.
Click to expand...

ahh, but it's sort of dual purpose Gary. I want one because of exactly how it fits on the rear wheel. If I just wanted a BBQ, grille or Braai it would be easy. It's not just an accessory but sort of part of the build concept.

If these things were found in every single household they'd be as cheap as light bulbs. I get that. But it's when you look around and see what other people pay, we just seem to get the arse kicked out of it here in the UK. Look at a kettle BBQ. You can get those for less than this. What about a tyre? Loads of work in one of those. But put the word Expedition in the title and you can whack another 50% on. Cost of items just doesn't seem proportional. It just perplexes me that in a World economy where the pound is a strong currency, we can't get things cheaper. When the German Mark was at its height people fell over themselves to buy expensive German kit. Now the pound is strong we can't get stuff from Oz, SA and the US at decent rates. Things pass through too many hands I think and everyone wants a cut. Typically it's shipping and import tax that kills it. And of course there being a limited market for some of these goodies.

Doesn't cheer me up though. Bah.

What is that thingy, at how does it look in use? 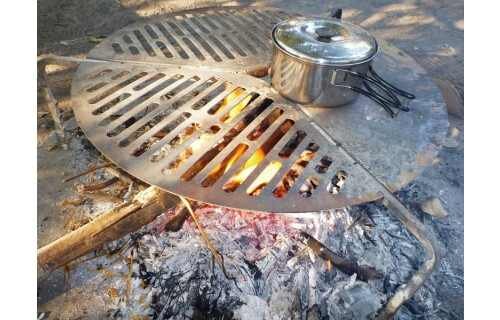 I've looked at this idea in the past, but I can't seem to convince myself that after driving for hours to get to a camp site, that cleaning all the dust and road grime and oily fume smells from the plate for an hour is all worth it to throw a couple of snags on it.
Maybe we just have more dust or more fumes or both. But seeing the back of my cruiser after a day's drive, and knowing a good BBQ is all about having some of that 'seasoning' cooked into it leaving an oiliness to the surface, I hate to think what that would look like each day.
Now, an airtight storage container that doubles as a table all in one, then I'm sold.

Ill just draw that up tomorrow....

I've used Paul's (Onelife Adventure) grill a few times and it's worked very well, ok it's made from stainless mesh rather the thin plate but I have no complaints.

When we were laning in Wales the other month, the lads had one of these on the back of their 100. Well it was one more like Charlie described. And home made. It was off in seconds and in true Saffa style had seasoned lamb, pork, lucky bags and other goodies on it over oak wood. Very nice too.

Ok, I gotta say I love the design of this thing, the look of the shiny stainless, three legs for stability and plenty of room under it. Lovely food cooked on it too…mmmm great!!

But…then I got thinking. The first time it's used it'll go black with all sorts on it from cooking which is normal. So, you put it back on the spare wheel after it has cooled (no real bother there) but then all that black mess is what is seen of the rear end of the truck. I don't know what the birds are like on safari but I wouldn't fancy eating off it after getting dive bombed even though I know the heat would kill any bugs. Then, what about river crossings, again, I guess the heat kills anything that gets on it.

It looks fantastic, I have to admit. My main gripe would be that it would only stay that way if not used. Now a round bag the size of the stainless parts with a zip from 10 o clock to 2 o clock and a hole at 6 o clock, with some nice branding on it would cover the grill plates, accommodate the three legs and do wonders for advertising and keep the thing looking good and reasonably sanitary.
Last edited: Jul 29, 2015

We used Paul's on his trip across the Pryennes last year, great job. The end game will be to fit one of those Trasharoo's (for rubbish or storage) on the back wheel as well, although might start getting worried about wieght on the swing out arm.
Wouldn't be the main cooking platform but more for when ever the chance comes along and you cant beat a good fire.