I got the cruiser in Dec 07 after much arguing with my dad. Thankfully he won the argument. I wanted to buy a defender 110 and he was saying that I should go for a cruiser

So in Dec i got my cruiser. I had always wanted a 4x4 but there was no interest from my family in outdoor activities. Finally after graduating in 06 I got my graduation gift......and what a gift it turned out to be.

Its a 2000 100 series 4.2 TD VX.
First day with the car and I took it out to the nearest mud hole. This is when the 4x4 bug bit me. I had always been interested in camping and the outdoors and now I had a vehicle that could take me there. I used it as is for about 4 months when I had a close call with a crazy taxi driver, it was at this point I decided the first mod would be the bull bar. The good thin was that I had beenworking for a year before I got the cruiser so I had a goood amount of money saved up and no where to spend it

So the cruiser went to the fitment centre for a TJM bullbar, PIAA Spots and a Snorkel (the snorkel was initially fitted for asthetics as I love the look) I then fabricated an aluminium rack for mounting on the roof rails. This later on prooved to be a mistake and I had to make a new rack that was mounted directly to the car. 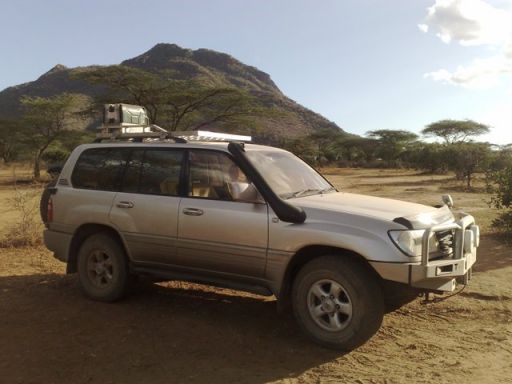 It was during this trip that I had 2 punctures and decided that before anything, a 2nd spare wheel needs to be added. Next was to change the geolander AT's to some MT's. I got cooper STT's at a very reasonable price so I decided to fit them. 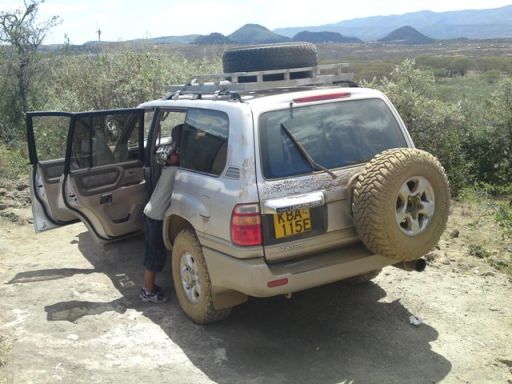 Around this time there was a trip that I was planning to do with some of my friends for the anual rhino charge. The cruiser was loaded and off we went. On our return journey I realised that one of the roof rails was broken and barely supporting the weight of the rack plus other stuff. Luckily it held up till we arrived back in nairobi and the first thing i did was scrap the rack and rails. There was no damage to the body. 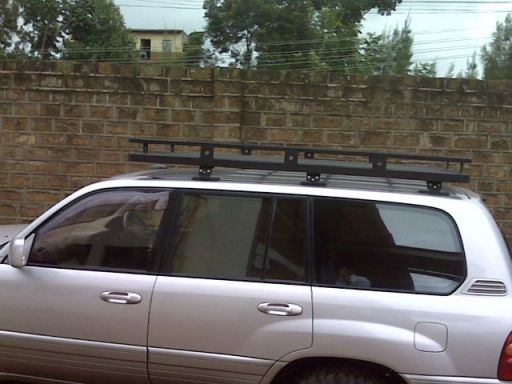 The most recent mod was the rear bumper that I built and fitted. I was going to later modify it to hold both the spare wheels but due to lack of time and a sudden purchase of a LC in UK I have not done the spare wheel carrier mod but the bumper pic is attached Nice rig, like the look of the bumper which is something I'll be addressing later this year.
Don't like the adverts? Remove them by becoming a supporting member.   Click here

So why don't you drive it here then?

Very nice indeed.....and has been said, you get to do it all over again.

More hoops for yours Jon??
N

Jon Wildsmith said:
Nice rig, like the look of the bumper which is something I'll be addressing later this year.
Click to expand...

I have deatils of the build if you are interested.
N

Paul said:
So why don't you drive it here then?
Click to expand...

Rob said:
thats a nice truck and now you get to do it all again

Navraj Singh said:
[quote="Jon Wildsmith":1nv7j33a]Nice rig, like the look of the bumper which is something I'll be addressing later this year.
Click to expand...

I have deatils of the build if you are interested.[/quote:1nv7j33a]
I'm sure I wouldn't be the only one interested in that so yes please

I am realllly glad he won the argument. Saved me from a grave mistake

Jon Wildsmith said:
I'm sure I wouldn't be the only one interested in that so yes please

Looking forward to see the rear bumper build, it is on my list to do aswell
N

Julian said:
Looking forward to see the rear bumper build, it is on my list to do aswell
Click to expand...

Just putting the post up. It is a copy past from LCCSA forum.

I love that last picture!
N

Just seen this and bless your dad for BEATING some sense into his wayward son. You've got a really nice rig and must be very proud of every penny you've spent and the many hour bashing metal.