An important mod on the list for my 100 was getting the spare wheel out from underneath and onto a swing out carrier of some sort. I decided on an OEM style carrier with a little modification because it would be independent of me getting round to building a back bumper so I bought one (260350795368) off e bay. For a comercial product I wasn't overly impressed with the welds but in the end decided to carry on and redo anything I didn't think would survive.

My 100 is a UK model so it would need some plates making for inside the body panels where the carrier would mount to add some strength. I rummaged and found some suitable bits of 6mm thick plate and bent and cut them to match the curves of the carrier hinge castings: 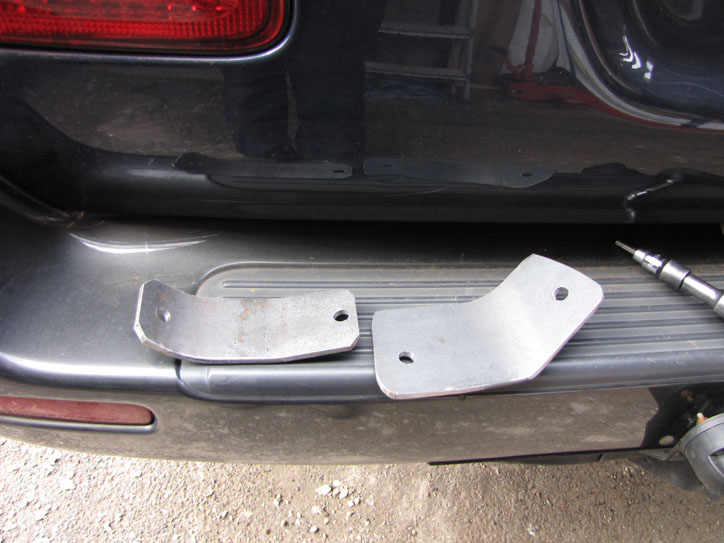 Then I drilled the holes for the hinges in the bodywork and bolted the carrier on for a tyre test fit: oops, as anticipated there's a bit of a problem with big tyres obscuring the lights! With a standard size tyre this wouldn't happen but the 36" Simex is too close to the light, too low and too wide (had to let air out to get it mounted). 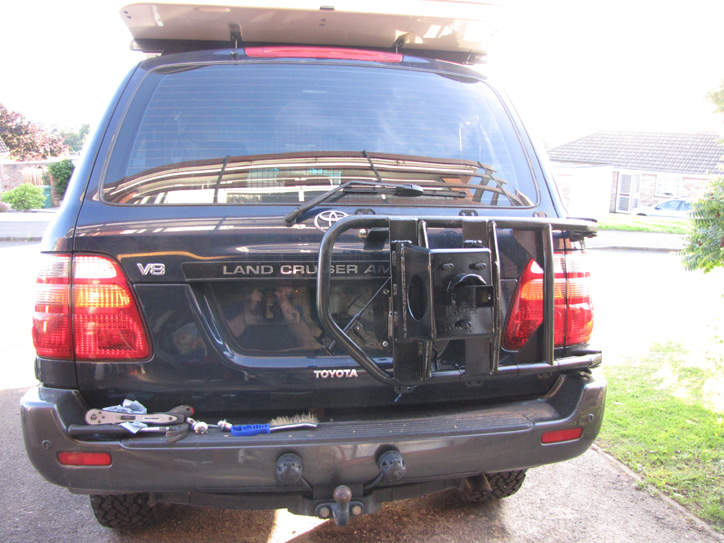 I also added a couple of strengthening plates and some small mounting tabs in case I want to bolt any extras to it at a later date. For mounting the number plate I put a bit of 50mm box into the middle of the wheel mount with a hole through the end a bit like a hitch receiver. The plan is to be able to insert an extra section between the carrier and number plate to serve as a cycle carrier for my daughters bike but I haven't got that far yet Now the lights are plenty visible even with a 36" Simex mounted. The number plate light I got second hand off e bay, I think it's supposed to live on a Prado but it works for me on a 100 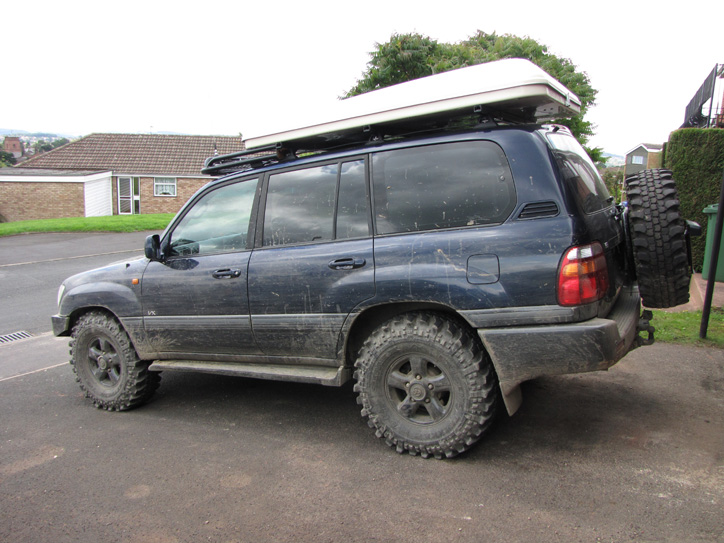 The Simex sits at a much better height now as well. It could have gone a bit higher but then it would have more of an impact on the view out the back which at this height isn't a problem.
M

Are those support plates for the inside of the hinge bracket strong enough, meaning do you get any flex in the body work when the wheel is opened and closed!

I have both type cruisers one with OEM spare wheel bracket and one without. Been wanting to do this mod for a while now but got to get all my ducks in a row first!

They seem to be plenty strong enough, there is no flex in the body at all even if I hang off the end of the open carrier or push as hard as I can up / down on the end of the carrier. The body panels are a decent thickness there and well supported by folds / adjacent panel work, I can't see there being any strength issues.

I've never see what the factory installs in the way of strengthening plates though so it would be nice to hear about that. Just 2 screws pops the light out and gives access

They're good tyres. Haven't had them on for a while though

This is my 2nd post on this forum but my 1st real post about Land Cruisers as my first got all political. So here goes. I'm a freelance event photographer based in Tottenham, North East London and I'm just about to buy a Land Cruiser Amazon to replace my trusty Vauxhall Frontera as I'm getting sick and tired trying to squeeze all of my gear into such a small 4x4. I'm looking to get a good clean V8 4.7 petrol with a mind to instantly converting it to run on LPG (just like my Frontera) and this is where Mr Jon Wildsmith makes an appearance into my motoring life. You see I want to be able to mount the spare wheel on the back (again just like my Fronty) leaving me ample space underneath for the double LPG tanks. Jon's solution to this problem has been a godsend (especially the nice little touch of the rear Colorado number plate). A quick call to the massive down at Equicar should sort me out there). I didn't like the solution that I saw on ebay with the rear number plate chopped to fit into the remaining space. This way I keep my spare wheel (as well as the looks), retain a massive loading area inside the cab and run on LPG. At last I think I have a plan. Thanks Jon.

I would suggest you follow Jon with a lot of caution as you will find yourself getting into all sorts of bother :laughing-lettersrofl:

Where did that year and a half go then? Still happy with this install, no signs of anything bending or breaking yet. It has a reversing spotlight plus jack and shovel mount as well now

I aquired an OEM one for comparrison thinking I might switch to that but while the existing one is ok I can't be bothered!

I have a idea.

I want to put the spare wheel in a semi rigid cover and attach the Colorado Number Plate onto it. Fully sprayed up, it should look like it was factory fitted. Wot you think?

That should work and look tidy. Don't forget the pictures

Did I forget to mention that I'm a event photographer? No worries! Alas I've yet to purchase a car but at least I think I've found a candidate. BTW: How much is a 2000 W plated V8 4.7 petrol 100 series with a 150,000 miles on the clock worth these days. What's the book price, market value (from a dealer). My research says about £5,500. BTW: I'm interested in that spare OEM wheel carrier that you've got gathering dust, if and when I should get my dirty little mitts on a 100 series.

I'm completely out of touch with prices once I've bought one I don't pay much attention so I can't really help there.

i have found this tread after making my plates to this i made mine out of 2 mm plate to get a very percise shape then added 2mm vertical braces i can add picture if you like. i then looked at ih8mud today and found a thread on there and they were saying that you have to take the bottom mount back to the frame of the corner?
what i what to know is has anybody had a problems with just using the wing to mount on i think it will be fine but i know have a bit of dought in my head that it might not be. the panels are pretty thick for a car plus in that area it does have lots of bends and creases to add strength there. i am only fitting a 255 85 16 on a alloy there anyway.

I don't know how often you use the tow hitch, is there enough height clearance to allow the trailer hitch?

I used 6mm so the sheet metal around the hole would be well supported and spread the forces over a larger area. I don't know if 2mm will work very well without being formed into interesting shapes like the OEM parts. You can buy an OEM lower bracket and fit that which would be better now we know they are available. That's what I've done on two 80's now and would do on a 100 if I needed to. 2mm might be ok at the top then which has a stronger shape. Thicker would be better but it is very tight for space up top.

The spare didn't interfere with the hitch at all Clive but access to fiddle about was best with the carrier swung open. Gav is best placed to comment on that now though

i know what you are saying with the 2mm i cant bend the brackets with the extra gussets that were added. they are formed very well to the shape of the carrier.
Last edited: Apr 4, 2013

Jon Wildsmith said:
Gav is best placed to comment on that now though

Snug is the phrase

I can't wait to visit Gav and see "The Black Country Beast" again. Yes, you heard right! I can report that after a year the external wheel carrier on my truck is rock solid. Lucky for me I got all the bits and pieces as well as a fair bit of advice from the Wildsmith himself.

Does any one know where to buy this from?

you can get them on UK ebay e.g. http://www.ebay.co.uk/itm/TOYOTA-LA...arts_Vehicles_CarParts_SM&hash=item4140bcb4b1 can't help you with a source nearer to you though.
You must log in or register to reply here.

To re gear or not, that is the question

Shes giving me not good vibrations