I bought some Pacemaker headers from Overland Cruisers last year to replace the log style OEM manifolds. The Pacemaker pipework is much longer than the OEM manifolds so they're not a bolt in replacement, the OEM cat pipes have to be cut 20mm forwards of the cats, be expanded and then have the supplied flange welded on. 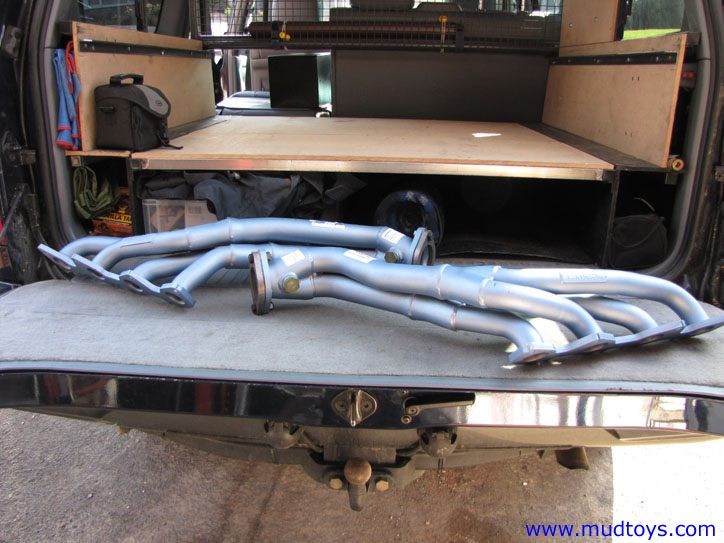 I looked into having the headers ceramic coated but that's an expensive option in the UK, as much again as the headers cost so I decided to use a wrap instead. I painted the headers with high temp paint, wrapped them in some fancy stuff from http://www.agriemach.com and gave them another few coats of high temp paint again. Why? The headers are bulkier than the OEM log manifolds (which have heat shields) and will sit a bit closer to surrounding items so it seems sensible to keep the heat in and also there are supposed to be performance benefits. You can buy stainless steel zip ties or use SS welding wire to hold the wrap in place but I found SS CV boot clips worked very well and I already have a tool for clamping those up nice and tight. No pics of the wrapped headers but they would just have shown black versions of the above really

Rather than messing about with the OEM cat pipes / system I booked the truck in for a session at Pro-Speed (http://www.pro-speedexhausts.com) so they could fit the headers and build me a custom SS exhaust from there all the way back. Charlie at Pro-Speed really wanted me to arrive the afternoon before and stop over in a B&B so they could get it all stripped down ready but I thought they could get it all done in a day

Once the OEM manifolds were eventually removed there were still fun and games getting the passenger side header into place (not enough room with studs / engine in place) so the engine had to be raised and of course the nuts were just as hard to get at, maybe harder with header pipes all over the place although at least this time they weren't seized! In the end it took all day to get the headers on and there was still the rest of the exhaust to be built!

The system they've built me is a work of art, really, very neatly tucked up out of harms way, TIG welded, quality thick wall stainless steel, sports cats into a Y pipe into a hand made silencer and then out the back end. I've had custom 'stainless' systems built before and the difference in quality of workmanship, attention to detail (and materials) between those and what Pro-Speed have built for me is huge and well worth a little extra for the Pro-Speed version!

I could have got the train home and gone back for it today but I've never liked leaving my truck behind if I can avoid it. It took till 11PM to get finished but they never showed any signs of cutting corners or reducing their standards to get this PITA customer off their premises

Because of the late hour I didn't take pictures, didn't want to be getting in the way, but I'll crawl under it with the camera sometime soon and shoot some pics then and drool a bit more over my pipework.

I would highly recommend Pro-Speed but I'd also recommend taking Charlie's advice on how long it's going to take to do the job, he just might know a bit more about the job than you ;-)

keen to see the photos, as i have just found a small hole in my downpipe in the wheel arch. also my rear box is very battered and bent. i think it may be worth replacing the entire exhaust with stainless steel.

i called up pro-speed and there seems to be a landcruiser forum discount, which is nice

I'll try and take some pics tomorrow. Not sure they'll do it justice but I'll try.

Here we go then, some pictures. It's all nicely tucked out of harms way - the OEM cross over pipe used to loop under the transfer / prop shaft where the new pipe loops over: 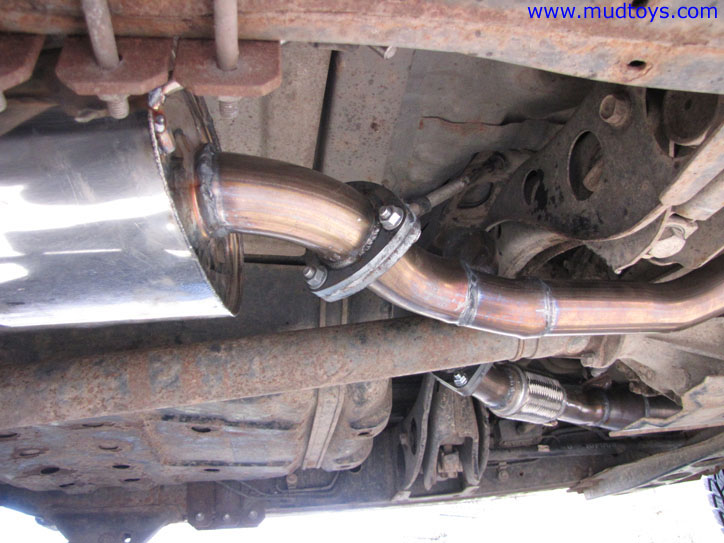 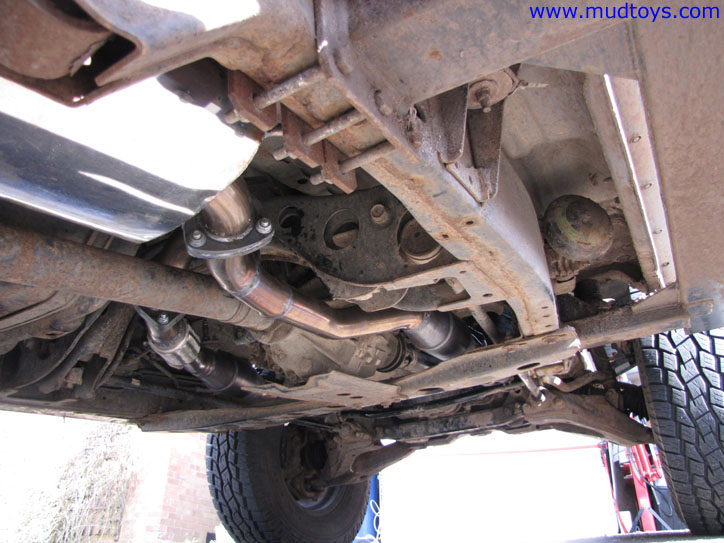 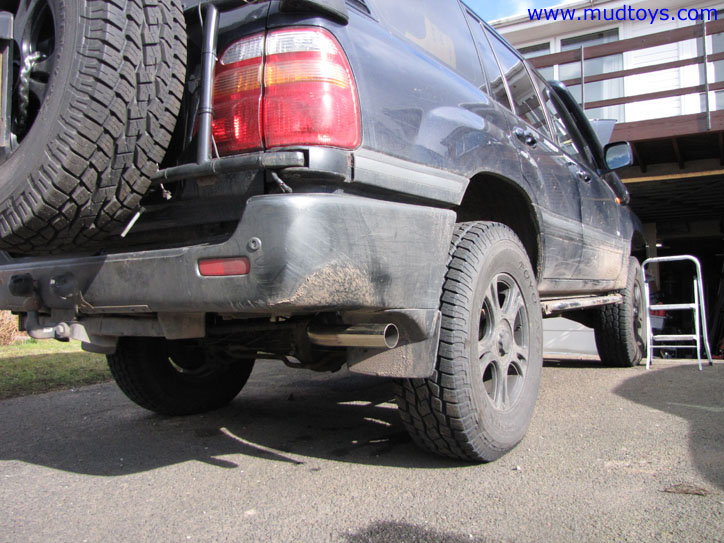 I went with the side exit tail pipe and no rear silencer to keep that area as clear as possible for the gas tank that I should be fitting under there. Once that's on I may have that last section of pipe re-done with a silencer if there's room, just to tame the sound a bit if it hasn't settled down once it's got a bit coked up. At the moment it's just a bit louder outside the truck than I'd like at certain RPM / engine loads but I gather that's not unusual for a quality stainless system and some of that resonance will go once it's got a decent coating of muck on the inside.


Jon Wildsmith said:
I went with the side exit tail pipe and no rear silencer to keep that area as clear as possible for the gas tank that I should be fitting under there.
Click to expand...

I was about to ask if you were going LPG on that rather thirst V8, or is this for camping? or both?

I want to extend its range a bit between fill ups and if I'm going to the trouble of installing an extra tank etc it seems like it may as well be LPG for the economy of that or so the tiny bit of me that's sensible says. I keep putting off fitting the LPG though because I'm not a 100% convinced I'll like it so the kit is still sitting in the garage waiting for me to get off the fence.
Don't like the adverts?  Click here to remove them

Jon
Looks great, nice to see proper 1 offs from people who know what they are doing!
It will probably last longer than the truck now!

You start with one thing and it seems always to lead to another
Pads, heard good things about these
http://www.hawkperformance.com/parts/index.php
But from America
Discs
TBRUK are doing these
http://www.3gbrakes.co.uk/main.htm
But I guess there will be others

Wondered when that would come along

Was doing some twisty hill climbs and decents and it just showed up how pants the EBC pads i have are. Thanks for the links chaps I'll investigate.

Can second the pro-speed exhausts recommendation.

My HDJ80 has a 2.75" custom exhaust by charlie- he did it about 2 years ago and its still in good condition- it was exactly what the vehicle needed,

James how many silencer boxes do you have(and where) and does it drone on the motorway?

one silencer- exhaust now runs inside of the chassis between the chassis rail and gearbox- hasn't caused any probs yet!

The single silencer isn't that large, but it doesn't drone on the motorways- its noisier than it was, but not by a huge margin- have spent 3 weeks solid in the truck with no probs

Pro-speed really know what they are doing- Charlie made the silencer from scratch! rolled the stainless in one go, filled it and added the baffle plates amazingly quickly. He also did the main piep (which has bout 9 bends in it) from one piece of steel by only looking at the car about 3 times- a real craftsman.

Well I've been back to Pro-Speed again today to see what Charlie could do to make it a bit quieter. Seems a V8 blowing through Pacemaker headers and sports cats into big pipes is a bit harder to tame the noise levels on than expected but then it sounds like most V8 owners that go to Pro-Speed want more noise not less bit of a contrast to my jap crap Charlie had made me a new 23" main silencer, with some internal baffles this time and it was a bit quieter: and there was just room for a small silencer on the tail pipe which made quite a bit of difference: Much quieter inside the car but still no stealth machine outside so I may investigate putting a supertrap on in place of that tail pipe silencer, apparently those are very good so I'll have to do some research.

OT - Jon, what happened to the bar (light bar?) on the top of your winch bar? Is it removable (in the true sense, not with a cutting torch!) or have you got a new winch bar?

It's just an alloy hoop that bolts on Andrew as do the buffers so I'm experimenting with how it looks with them removed - less bling I think and other than as a potential antenna mounting point the hoop has no practical value really being held on with just 1 bolt each side. Didn't like how it looked with no hoop with spot lights so they came off as well till I can have an experiment with an idea I have for a light bar there. The HIR bulbs I have in the headlights are so good I hadn't even wired up the spots yet anyway

Rob said:
keen to see the photos, as i have just found a small hole in my downpipe in the wheel arch. also my rear box is very battered and bent. i think it may be worth replacing the entire exhaust with stainless steel.

i called up pro-speed and there seems to be a landcruiser forum discount, which is nice

Hi Rob,
Did they mention how much of a forum discount?
Chas

I may experiment with a black hoop or ARB style bar work, dunno yet.

Pipe is 2.5" Chas and that's what Charlie recomended to avoid drone which he said 3" is more prone to and my own observations of other peoples exhausts support that. Remember I'm petrol though and NA, no forced induction, if I ever drop a blower on it I'd need the 3" from the Y pipe back. Avoiding drone in the truck was much more important than maybe squeezing another couple of HP out of it.

On a TD the turbo muffles the combustion noise quite a bit and being forced induction makes a lot more exhaust gas that needs to escape so the bigger bore may work out better.
You must log in or register to reply here.