Working on diffs is much easier if they are properly supported so I have a frame onto which I bolt different plates depending on the diff. I already had plates for an 80 series rear diff and as the 100 has the same casing that's some work saved Here I've mounted the diff in the frame ready to remove the carrier: 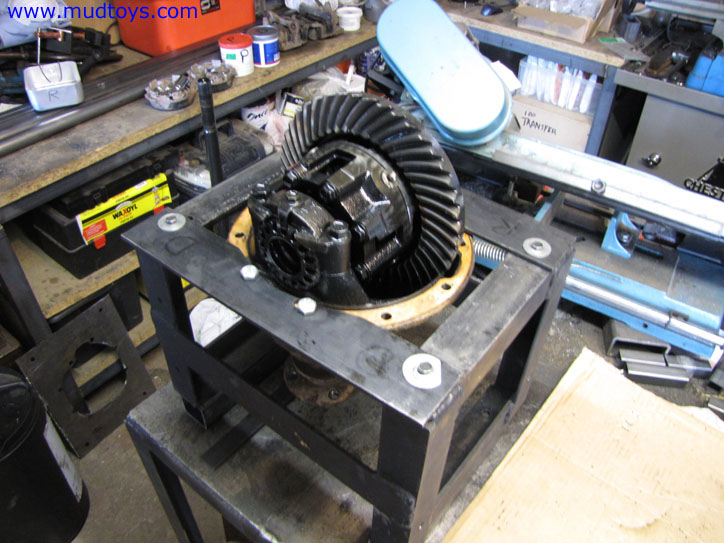 I measured backlash of the existing set up at 0.3mm with a drive pattern to match, way out of spec and surprising on a low mileage diff like this. Anyway, as I'm planning to remove the ring gear now is a good time to remove the bolts - while the carrier is still in the casing. You can either jam a bar or big screwdriver into a likely looking hole or as I do put a bar on the pinion while I crack the gear bolts. Trying to do it later with the carrier held in the vice is a lot more trouble

OEM carrier with no ring gear: ARB carrier with no ring gear: 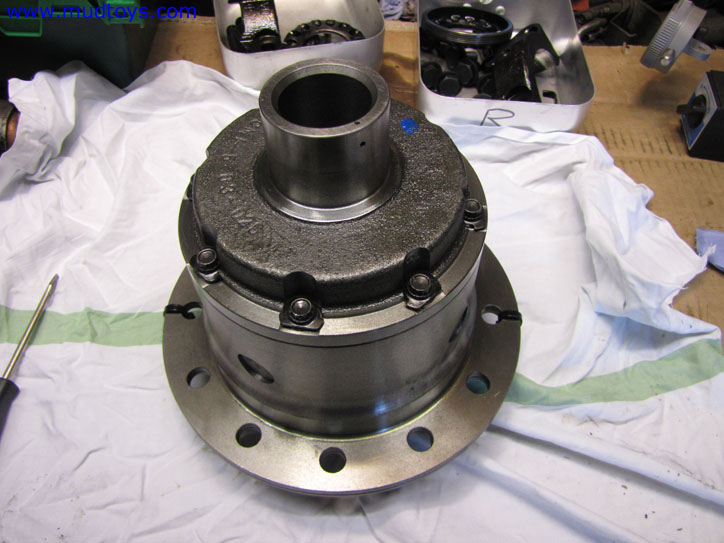 I pressed the ring gear onto the ARB carrier and when it's near enough install the bolts finger tight to make sure the hole alignment is correct. Then I snip the zip ties holding the carrier together and finish pressing the gear on: Before releasing the press I run two bolts all the way in to keep the carrier together. Then it's time to press the carrier bearings on, notice the ring gear bolts are still not done up and they won't be till I'm ready to put the carrier back in the casing. First one side: Then the other. You need a good collection of odd bits of metal to make full use of a press. On this side there is more carrier to clear so here's a sequence of pictures to give an idea of how it builds up to being able to press the bearing on: Luckily I have quite an assortment of offcuts and aborted turnings

I happen to have a set of 80 series 4.88 gears on the shelf at the moment waiting to be installed and so I thought it would be interesting to compare. If you look closely you can just see the bolt heads of the installed 100 gear through the bolt holes of the 80 gear resting on top. The 100 gear is bigger but only a bit: The casing is common to the 80 and 100 but the carriers are different. The 100 accomodates the slightly bigger R&P and also bigger diameter shafts with more splines. You can't get aftermarket rear diff gear sets for a 100 series at the moment but a carrier from an 80 with the side gears from a 100 series carrier installed should fit and work letting you install an 80 series after market gear set ...

With the bearings in place the ring gear can now be bolted on properly. Use some high strength thread lock, do them all up tight as you can on the bench and then put the carrier back into the casing for final tightening. You can see the bar I fix to the pinion to torque the ring bolts against: While the carrier was out of the casing I also drilled the 11.2mm hole and 1/4" NPT tapped it for the air inlet. I bought a big box of rags off e bay and they're perfect for wrapping up stuff I don't want getting mucky while I do something else and that's what I did with the carrier: 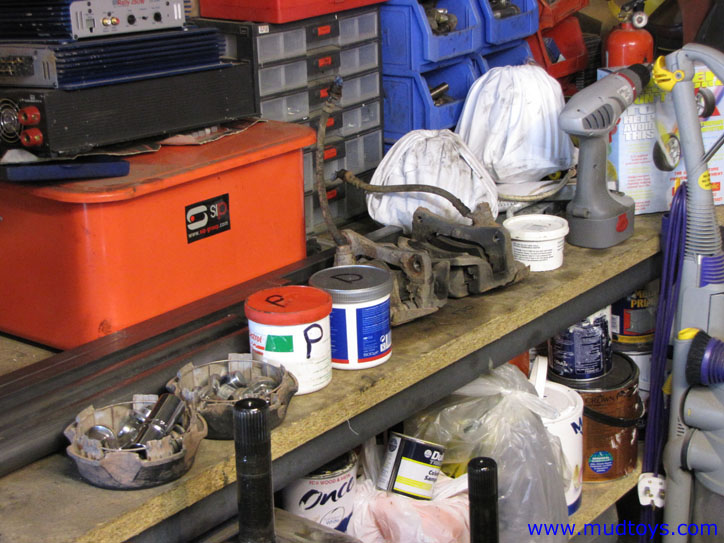 With the ring gear torqued up I adjusted the carrier for .14mm backlash with good bearing pre-load and did a pattern check: First impression is that maybe the pattern is bad but looking closely you should see that really the problem is I'm struggling to get a good imprint. A look at the secondary markings is helpful when this is happening: 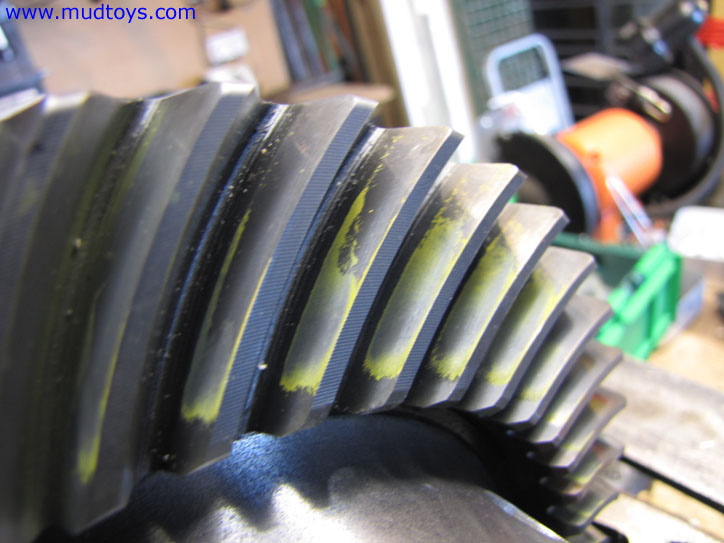 The contact pattern is fine and it's not the first time I've had trouble getting a good imprint, you just need to look more carefully when that happens.

Next job was to fit the air seal and route the piping out through the casing: I opted for the 'heavy duty' air line kit: A handy side benefit of that choice is that it can be connected directly to the ARB compressor with very little messing about ready for pressure and operational bench testing. Run the compressor and it comes up to pressure and switches off. Then sit for 10 minutes and if the compressor hasn't restarted you know you don't have a leak This part of the job (installing the ARB) has probably taken about 3 hours not rushing. Note that I haven't touched the pinion because the bearings run smooth and the gear contact pattern is ok and I've used new carrier bearings so I haven't had to spend time removing the old ones. If I'd needed to work on the pinion shim then there would have been a lot more time depending on how many goes it took to find the right shim. Typicaly you don't need to touch the pinion for an ARB install but will for an after market gear set.

Now it's ready for putting back in the truck Better make sure I have my 3 shredded wheat for breakfast cos these things are heavy and must be put back in carefully to avoid damaging the air line and seal
You must log in or register to reply here.

To re gear or not, that is the question