Hi, my name is Dylan and I've been a mechanic for 30 years. I've always had a huge respect for Toyota mechanicals. Last Christmas I indulged my desire for an early 90's Land Cruiser.
I bought a metallic blue Japanese spec LJ78 2.4 auto.
I was determined not to buy another rusty restoration project, I know from previous experience that I've ended up with a couple of great vehicles but the grinding and welding process doesn't put me in my happy place. Here's the 69 Alfa 1750GTV that was so rotten it needed every body panel replacing when I bought it and everyone said it would never see the road again. They were wrong and the result was the preservation of a beautiful sporty Italian coupe. There were many dark times when I wished I had never set eyes on the rusty Italian piece of s##t, but it came good in the end. The Land Cruiser I bought is fairly rust free....happy days!
When I collected it and drove it the 50 miles home I had one eye on the temperature gauge, waiting for it to squirt pressurised coolant all over the M6 and do its best impression of a kettle. I was pleasantly surprised how well it cruised at motorway speeds and even more pleasantly surprised that my engine wasn't aware of the head cracking problem that I head read so much about on the internet. 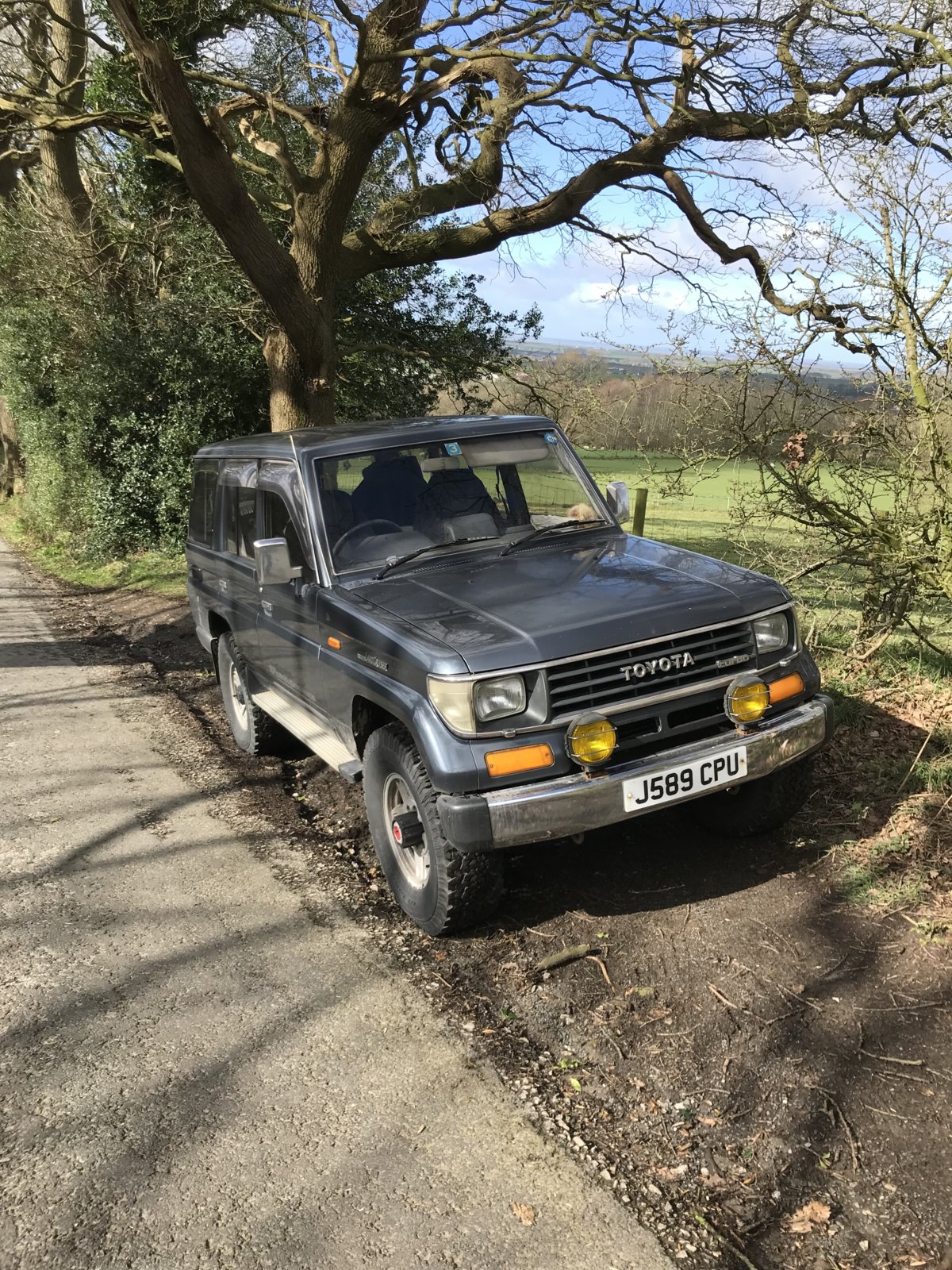 I was disappointed to find out the 4 wheel drive didn't work so I replaced the front hubs with manual ones.
I was even more disappointed to find out the locking diff rear axle had been changed for a standard one.
The battery going flat every couple of days was more than disappointing. This was caused by a bad repair done by a "professional" garage. I found an expensive receipt that detailed the recovery of the jeep and repair of the wiring fault that had caused intermittent breakdowns. They wired a live feed from one of the batteries straight to the injector pump! No more intermittent break downs but plenty of non starting due to a flat battery. This was an easy fix and the cruiser has been 100% reliable ever since.
I replaced the front brake calipers due to 3 seized pistons.
I replaced all four shock absorbers because one of the rears was completely pished and made for some interesting handling characteristics.
I replaced the thermostat because the engine was taking forever to warm up in winter.
I've run the Land Cruiser since then without any issues.
Recent upgrades have been a set of refurbished Colorado alloys, which I'm really pleased with the look of and replacing the original rusty spot lamps with a pair of Cibie Oscars. I could do with some assistance with my next phase of upgrades, 1kzt engine and 5 speed manual box.
I bought a 4 runner for it's kzt engine and was hoping I could use the manual gearbox as well.
I've now worked out fitting the 4 runner gearbox might be possible but will require a lot of difficult modifications.
So would anyone sell me a good 5 speed manual gearbox/transfer box assembly for an LJ/KJ 70?
The other main thing that's bugging me is the front coil springs, they're either tired and weak or the wrong ones. It doesn't really show on the photos but the front sits an inch or two lower than the rear and crashes and bangs over anything more than a small bump in the road while the rear end rides everything superbly.
I'm having trouble locating any standard height coil springs, any recommendations?
In case anyone's wondering, we call it "the love jeep" because we already had a motorhome which we called "the love bus" so a Toyota LJ jeep just had to be "the Love Jeep".

Hi Dylan and welcome to the forum. Being an 80 owner and not that familiar with the 70 series I can't help you that much with your Cruiser Im afraid but there's owners on here who know them well. It looks pretty decent from what I can see of it but my eyes keep getting drawn to that Alfa. In fact its brought on one of my hot flushes. Having helped a friend with his similarly rust ridden Alfasud years ago I can imagine what you went through but man, it was worth it!

The Alfa prettier than the Land Cruiser?
Yeah.......and sounds wonderful.
Wasn't sure if the Alfa would get any love on here. Thanks for the appreciation.

An old import trick is to fit a difflock switch and sell it as if it has one. Can you see any sign of wiring thats redundant?

Are you good at motor electrics? As there's a task of deleting the ecu to get the truck converted from 2lte auto to the magic 1kzt. The autos have all the mounts built in to add the clutch pedal so that's very straight forward unlike the 80 series.. I have it written down what to do with the electrics so would be able to help there to make it easier.

From the 4 runner the 1kzt bolt on engine mounts are perfect but you would either have to move the chassis engine mounts or add plates to join to the 2lte mounts..

When get a lj manual gearbox the 4 runner bell housing will bolt straight to it, so very straight forward that one.. no need to buy a kzj specific box..

There's a bit to it but am sure that it's all within your capabilities!

Hi Iwan, thanks for your help.
The truck was definitely factory fitted with a rear diff lock. The switch and the wiring are both present.
I actually enjoy the electrical side of engine conversions, finding the right info is often the most difficult bit so really appreciate your offer of help.
Would my propshafts need altering if I fit the LJ manual box, or is that just the case if I fit the 4 runner box?

The auto propshafts just vary in length, when going to manual the auto front is longer and the rear is shorter. But a prop shop could modify the lengths I'm guessing.

Not sure about the 4 runner box as it stands it's been a good 10 years since I've seen one, if the transfer outputs are in the right place then it would work but I think the rear output is in the centre.

Your transfer case will fit the manual box.. possibly if you could change the 4 runner rear gearbox case and fit the rear case off a lj/kzj gearbox but then there could be differences..

F
I thought it only has a little bit of tin worm.

Hello all , Toyota enthusiast new owner of a 95
2

T
New here but not to Toyotas