So I've set about changing the rotors and pads on my 1993 Troopy. Easy job, I thought. An hour maybe, I thought. Kerrist almighty...couple of questions for those in the know:

The new pads can replace the old ones but rub on the rotors massively - this is either due to the increased size of the pads or actual scraping on the edge of the old rotor (new rotors seem to have a smoother edge on them). Is this normal? I would assume not....

To change our the rotor, of which I've already brought a spare with the smoother edges, looks a might harder than I had figured. Do you have to take off the entire central hub to get at them or am I missing something?

Any help would be most welcome! 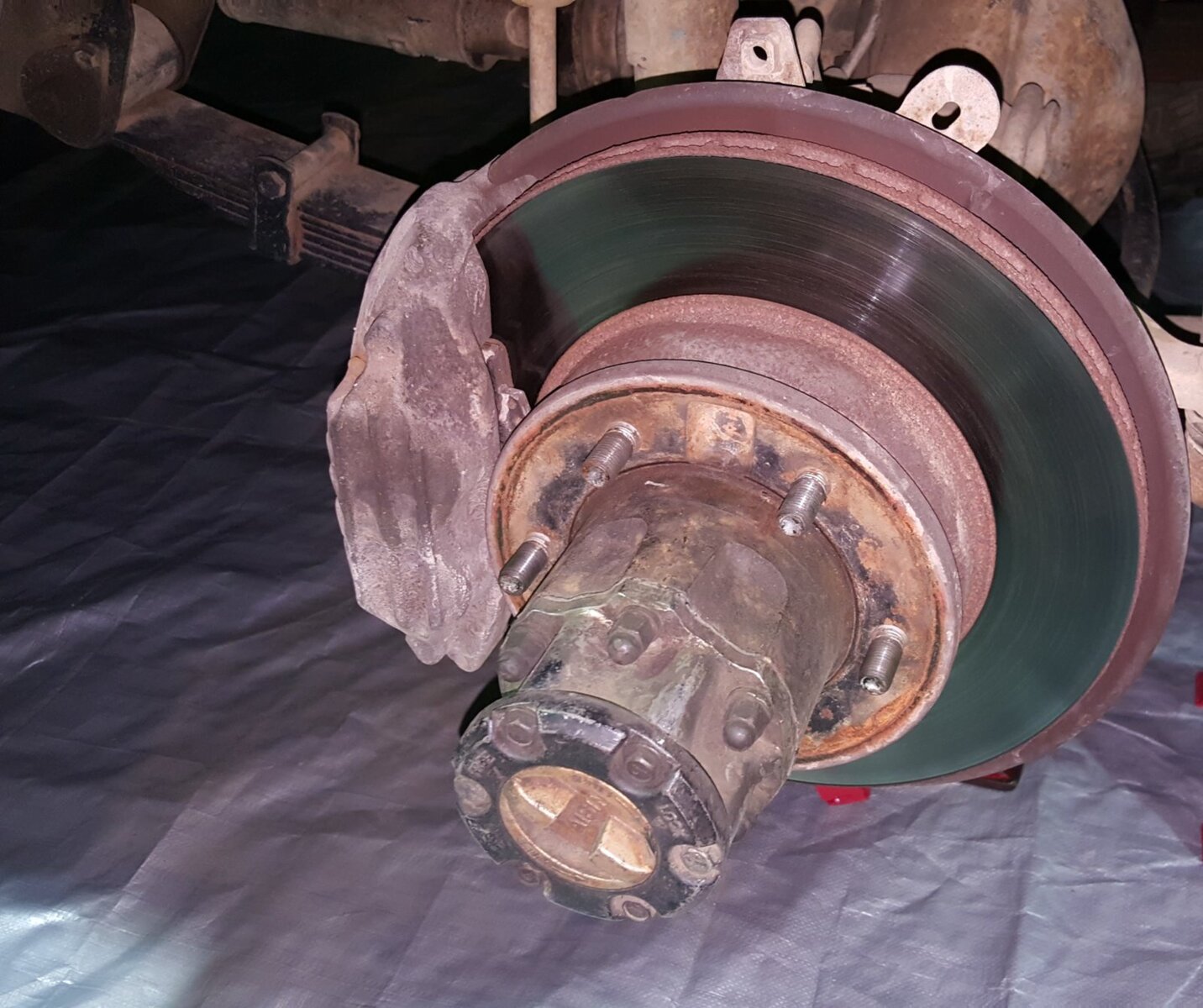 I changed the rotors on my 60 series axles a while back but at this point the parts are all interchangeable between several models including your Troopy.

Before you tear down the old set can I suggest that you get new wheel studs and, if you don't have one, find someone with a press (my buddy has a 20 ton press so we used that). I am assuming you have a gasket set and don't need to rebuild the knuckle but that you have new inner and outer wheel bearings and oil seal but if you using the bits that are already in the wheel bearing housing - then fine.

You now have to separate the old rotor from the wheel bearing housing - remove the 2 holding screws (if they are present) then use the press to separate the two parts. Re-assemble with new rotors and, it is much easier, with new studs.
Re-assembly is the reverse order but make sure the oil seal slips onto the stub axle shoulder and that positions the inner bearing. Fit the newly greased outer bearing and tighten the outer wheel bearing nut - rotate the hub 4-5 times one way then the same back now tighten the inner nut then back it off an eight or fractionally more. Turn the rotor back forth till it feels right - slid on the locking tab and tighten the outer nut - lock the tab which is against a flat.

* Cone washers: Just assuming you've not dealt with old cone washers before and there are various schools of thought....
I've filed two small punches -one slightly thicker than the other - so that they have a slot end like a tiny screw driver (but stronger). Where the split is in the cone washer insert the punch straight on and hit the punch with a hammer - it should pop enough and then angle the punch to the left (undo) and tap and it should start to come off. Other ways are to hit the end of the stud with a soft hammer but I've never had success that way.

If it goes well you are looking at around 3 hours a side - depending on pressing and the (bloody) cone washers. First time I did it (knuckle rebuild) it took a day or more to get the cone washers out as someone had siliconed them in!

Wow Rodger!! Thanks for the great reply!!

I'm going to replace my front rotors and pads, also I want to repack bearings.
But one question: Do I have to replace some seal or something which must be replaced everytime I remove wheel hub? I need to do it during one weekend so I want to be prepared not to be stacked on missing part...

In Rodger's instructions doesn't seem is something like this. But I want to be sure.

Will with my vast experience I can tell you that....I didn't do it! After taking days to even loosen the damn bolts on the calipers and then bleeding the brakes, I'd had enough and wanted the job done this side of 2019. So I got someone else to do it. Besides, I didn't have the tools at the time or the new bearings - my intention was to change the front discs and pads, not check and change the bearings! But anyway, the directions do seem pretty straight forward but I'd have some new bearings ready to go along with the equipment listed out by this chap. Hope that helps!

Just replacing the rotor and re-packing the bearings, you should be able to draw the stub axle without damaging the oil seal on the back of the stub axle but depending upon how long it has been on it might be a bit frayed, if so replace them. Before tearing it down check the wipes (felts behind the rotor that sweep the axle ball) and if they are clogged, oily or frayed replace them. But if you are going that far you may as well do the whole axle because if there is oil or oil trace then the inner seal has gone.
I've always just purchased an axle rebuild kit prior to doing the job and then you are short of nothing you need.

All right guys, it helps.
I just ask because I know Isuzu and when we repack wheel bearings we have to remove inner seal and it must be replaced otherwise we can't remove the inner bearing. But there is the independent front axle.
I have no experience with life axles so a bit adventure and exploring...

And just quick question: Is in this kit everything for rebuild the knuckles and bearings?
http://www.cando4x4.com.au/p/6223398/swivel-hub-kit-wheel-bearings---toyota-landcruiser-hilux.html

Yes. Although your posts say .CZ and you can get them in Europe which will save carriage costs etc. and it'll get to you quicker. Try www.euro4x4.
Assuming your steering is smooth and if you end up removing the knuckle bearings (because you are replacing the inner oil seal) count the shims on each location (top and bottom) and replace with the same number and thickness.

Yes, I am generally from CZ and I am registered by Czech email address but now I'm living in Melbourne. So that's why I sent that link...

Thanks for great answers and tips.
Unfortunately, in Czech, we can't get these great trucks...

Hi Chras, i used a rerrain tamer kit which was superb with their wheel bearing kit too. Not sure how the cost compared but I would recommend them

Thanks,
I am happy with any suggestion.
I don't have any overview of aftermarket companies which makes parts for Toyotas...
And of course, it is different in Europe and here in Australia...

Guys, last weekend I did tie rod ends, it wasn't big trouble...
BUT I took a look on front brake callipers and one question about it - when I want to remove the calliper from the rotor, do I need to disconnect brake hose? There is something like holder for brake pipe but it seems like rivetted into part which holds hub bearing (I'm sorry, don't know the name of this part in English)
Is there any trick or I really need to disconnect brake line?

Haha, this is what I didn't want to hear :-D Looks like I need to buy brake fluid in my "home's stock". I have noticed that rivets and was a bit surprised. that's why I asked. I know these callipers from 2007 Hilux and Landcruisers 200 and 120 series but there are independents axles so flex hose is exactly from calliper which allows you to remove it without disconnecting...
You must log in or register to reply here.