Finally got round to installing this - it forms the backbone of my packing system, and will be useful to lash the load-net to for the high-level storage stuff ...

Rule 1 - READ the INSTRUCTIONS and UNDERSTAND THEM .. 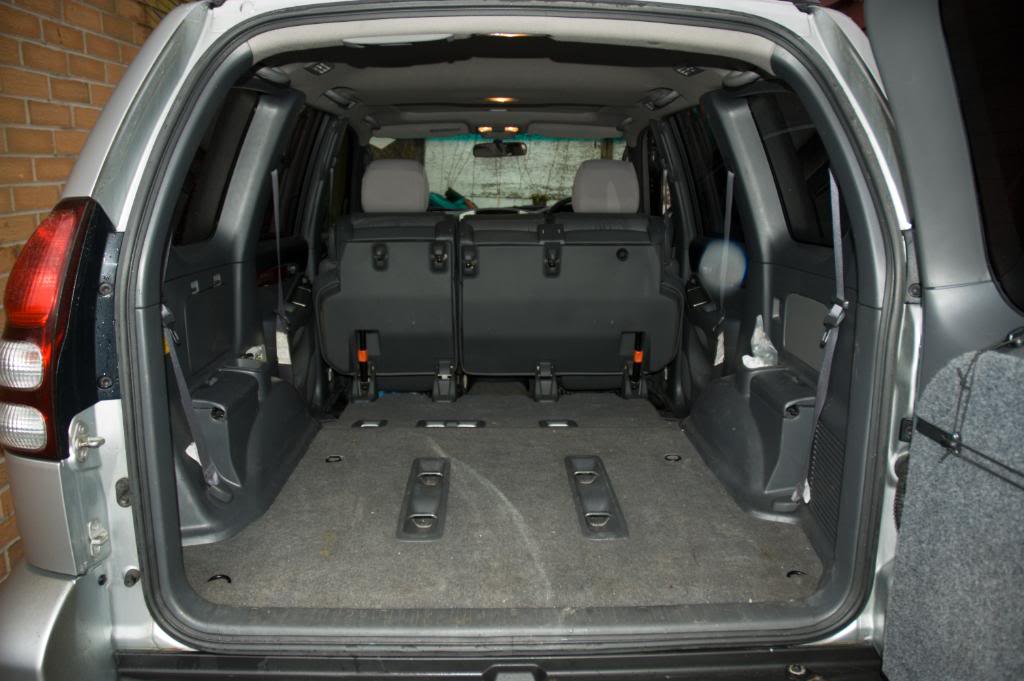 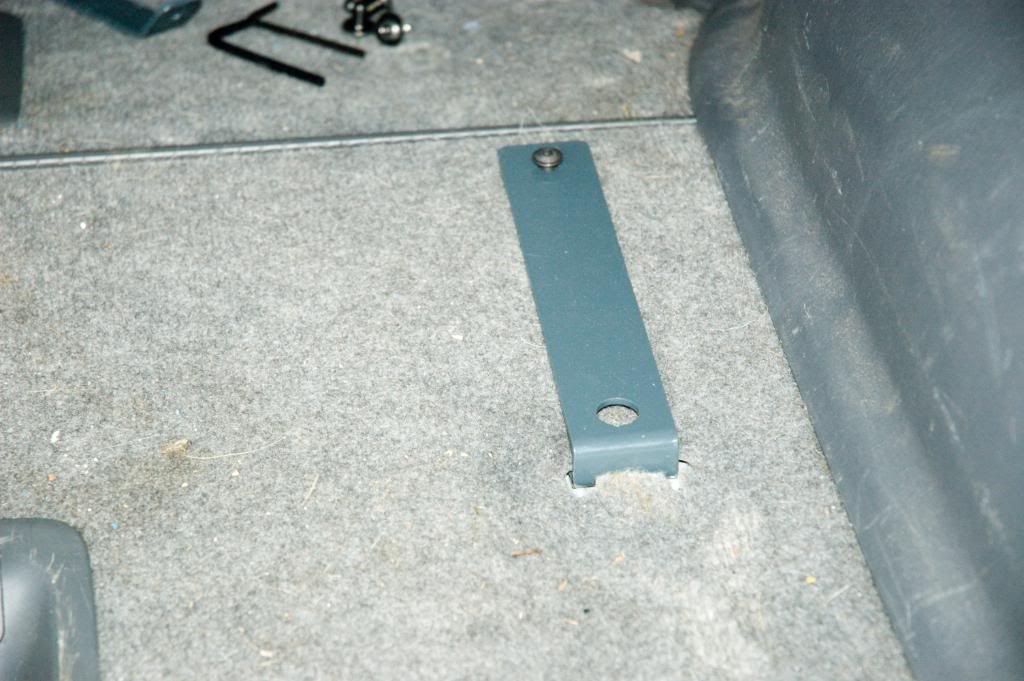 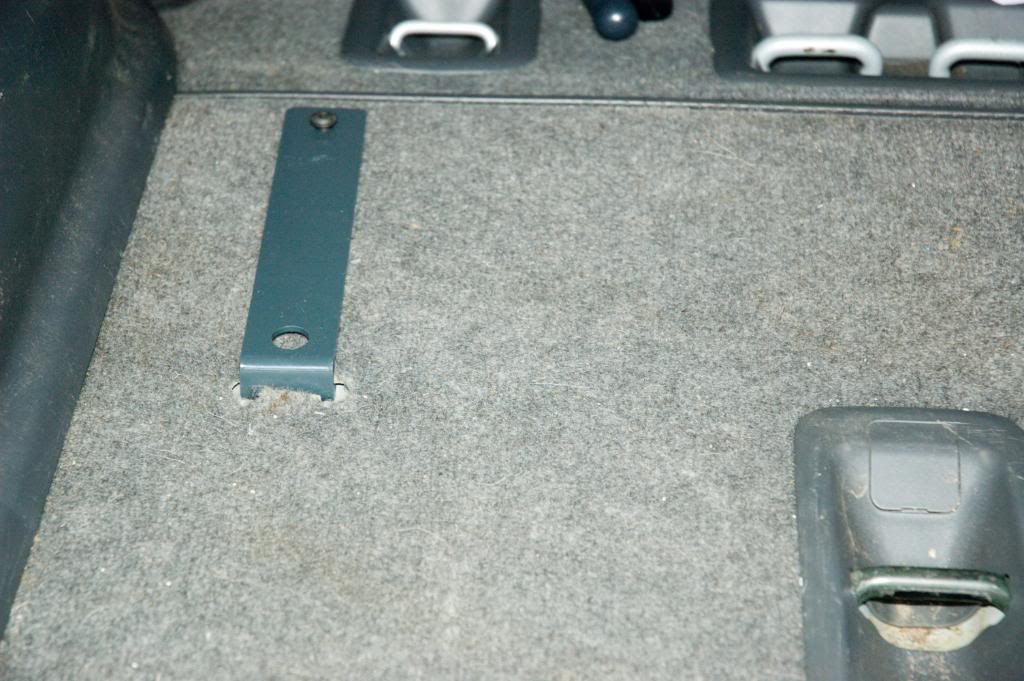 Second bracket fitted - note, you have to trim a little bit of the carpet to get to the bolts with the socket - no big deal ... 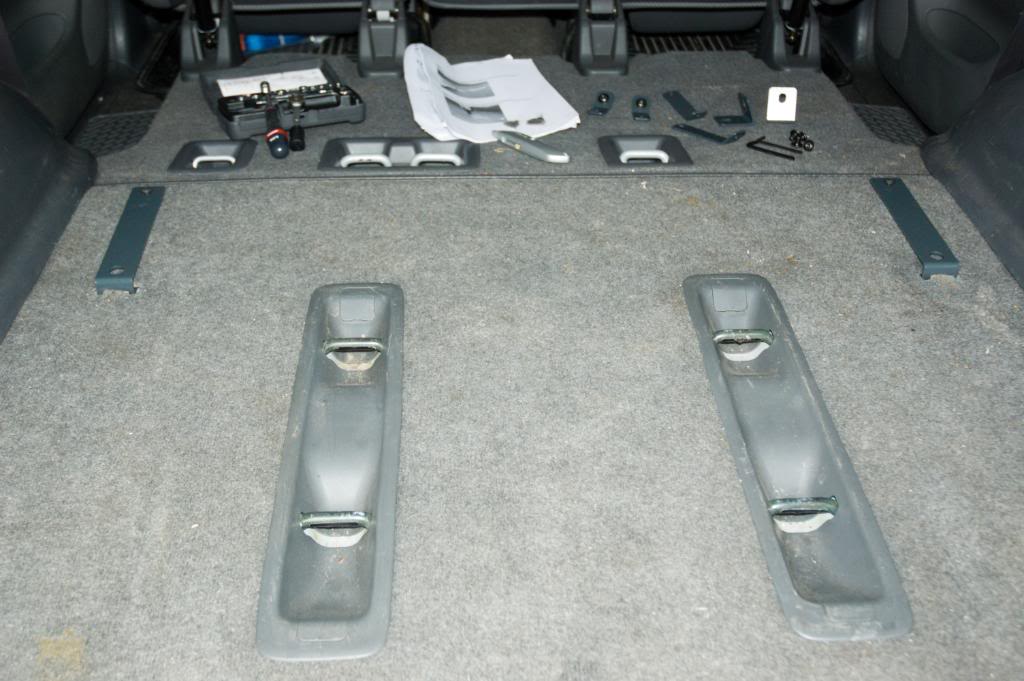 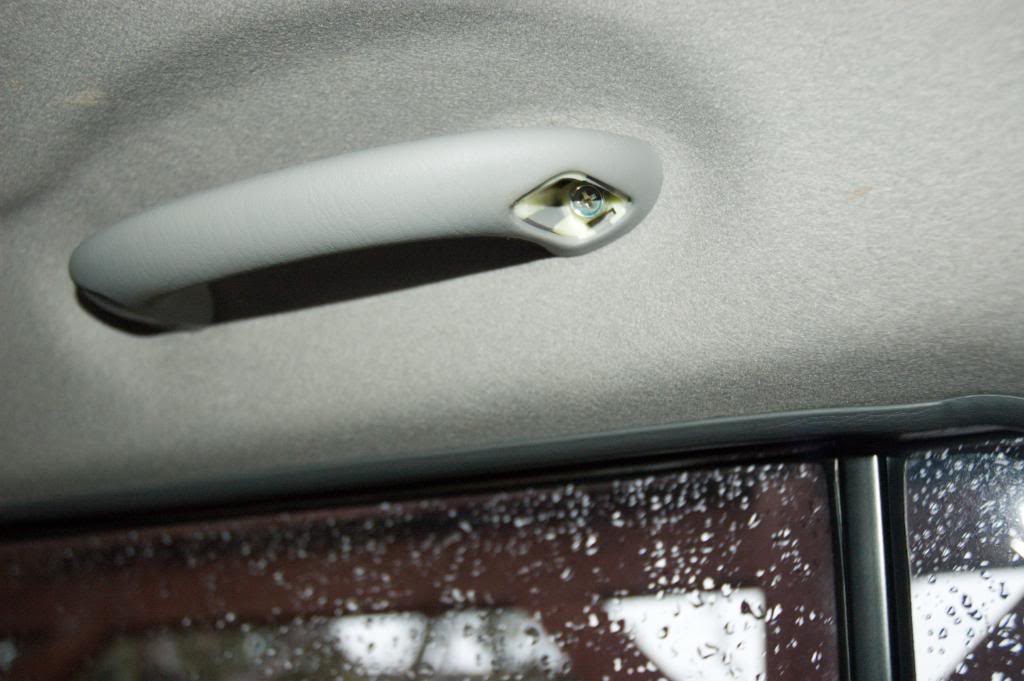 Bolt the top mounts in place 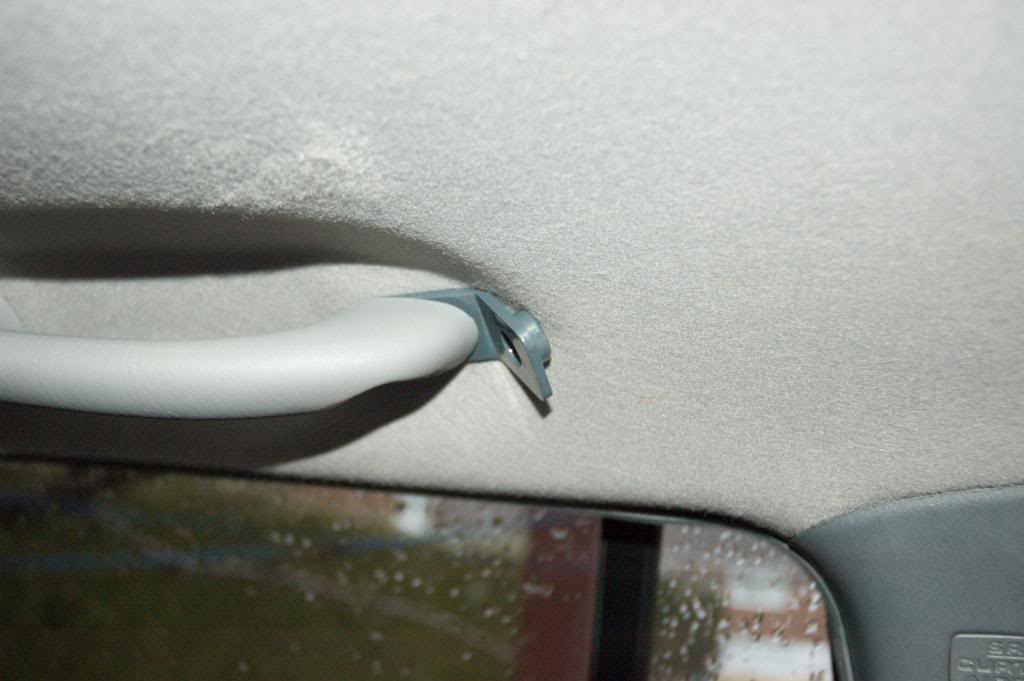 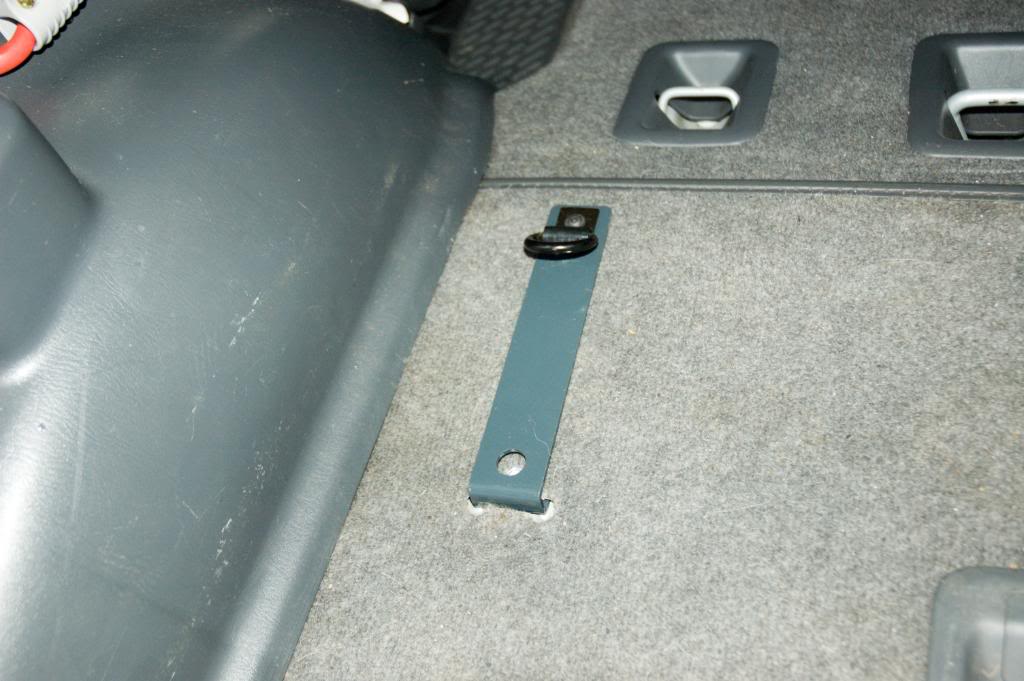 Bolt up the top of the dog-guard 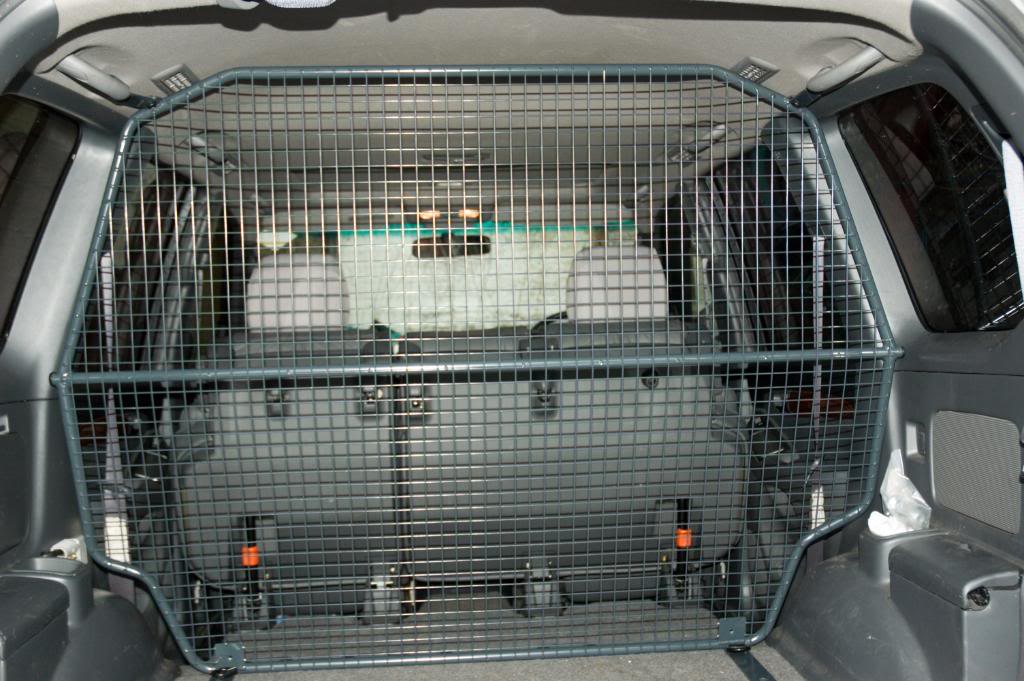 Bottom mounts sorted - note that the bottom attachment point is of unequal sides - long sides to the bottom, tie-down ring back in place Bolted up with the supplied aallen-bolts 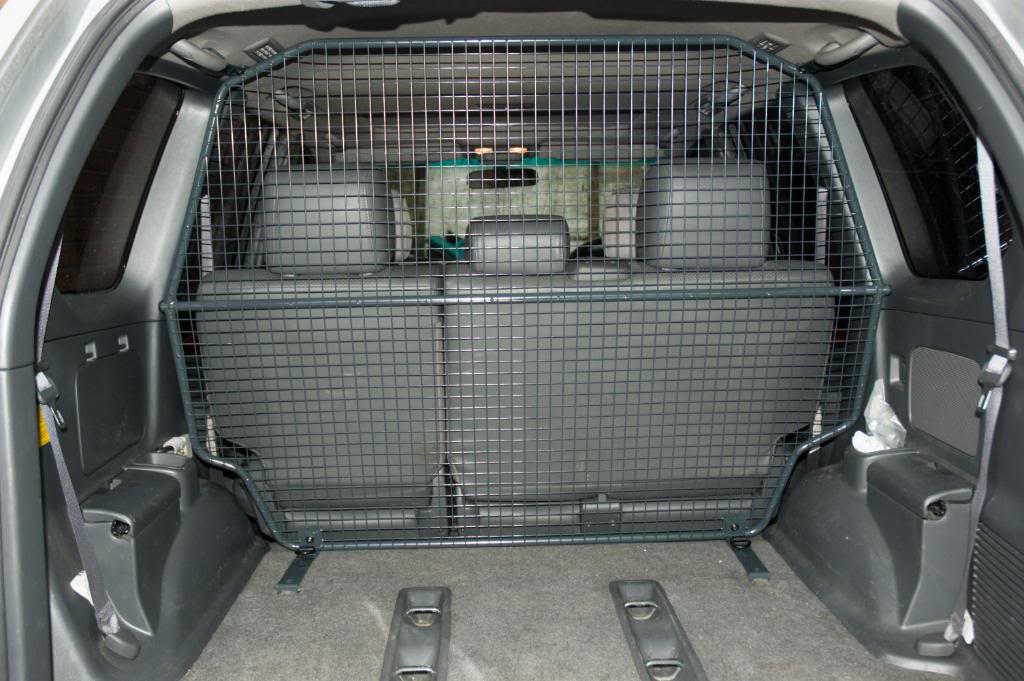 I suspect I was sold the unit for vehicles without rear airconditioning, as the top of the guard is very close to the vents ... but it should be OK.

The nice thing is I can remove it with 4 allen-key bolts undone and you won't really notice the mounts, and put it back in quite quickly too.

Is that a Toyota guard?

Where does the airbag curtain stop? Does it not extend past the guard? Wonder what would happen if deployed?

Still, I like it and certainly would stop the dogs ruining the seats...


Is your Anderson plug a bit to close to it or is that just the photo?

Genuine Toyota guard from here - also wondered about the airbags ...

The plug is probably no longer in quite the best place, but it's OK - it still works as intended, and the cables to the battery are long enough for the detour.
S Hopefully I quoted the correct picture there....
Its meant to be the third one....
How are the brackets attached? Is it the side with the Allen Key Bolt? I'm presuming its the other side with the hole.

Also have you a more direct link to the dog guard, or a part number? I'm going to get a quote off my local Toyota dealer if I can. If not Ill contact them, and ask, but id like to be sure I'm asking for the correct parts.

Also........ see the Cargo rings at the base of the dog guard, I take it that these aren't necessary, as they aren't on my vehicle. (I'm hoping the mounts are under the carpet).
And do all the parts you need come with the dog guard, or do I need to order longer screws, or brackets?

scubadec said:
How are the brackets attached? Is it the side with the Allen Key Bolt? I'm presuming its the other side with the hole.

Also have you a more direct link to the dog guard, or a part number? I'm going to get a quote off my local Toyota dealer if I can. If not Ill contact them, and ask, but id like to be sure I'm asking for the correct parts.

Also........ see the Cargo rings at the base of the dog guard, I take it that these aren't necessary, as they aren't on my vehicle. (I'm hoping the mounts are under the carpet).
And do all the parts you need come with the dog guard, or do I need to order longer screws, or brackets?
Click to expand...

Here are the install instructions:

and the part number is PZ483-J2120-00. It came with everything I needed to do it - some of the captive nuts needed a bit of a clean-up with a thread restorer to get the powder-coating cleared away. On the pic above, the lower mount bends back underneath itself at the point nearest the camera, and you need to cut a 'V' in the carpet to use the existing bolt from the 'D' ring - it's a 6mm bolt, metric thread, so if you've got grommets or just the hole, these will do.

Nope - the cargo rings aren't necessary - in fact, I've taken them off mine now to fit the packing system ...

There is an install manual to convert a 'normal' 120 into one similar to yours here:

which shows the mounting points to use (see picture 14 on Page 8) and it seems your 'D' rings are probably still there, under the floor ...

And looking at all that, I don't see how the dog guard is supposed to still fit?? Best to chat to your local Mr T ....

Ok, So I looked at both the links, both very informative, especially the second one which shows the full process of conversion that my cruiser went through.
Then, I went out in the pissing rain, and lifted up the floor in my cruiser................

Bingo...I have the two cargo loops on the floor, left there during the refit of the back, I also have the 3rd row of handles up top, but I dont have the mid way up points, from the first link, for the boot cover curtain, so neither of the guards in the two links are what im after.............
I need the exact same model as you have, for easiest fitting.....It will divide up the storage area of my cruiser roughly 60% / 40% which suits me fine, as I have a bigger area for my wet Scuba gear, and a smaller area for dry stuff, and if i need the full area, it is quick enough to take it out.

Now, All i need is someone to sell me the one I need.
Thanks again Gary... Ill send an email off now to the people you got yours from.
Don't like the adverts?  Click here to remove them
S

PZ483-J2120-00
Ok according to a quick google search, thats not the model you have Gary... That model has the attachment points at the side, as opposed to the top ones, which I would prefer.

Ok I'll look up the model details and let you know

Thanks Gary, a massive help, as always!
S

I contacted they guys in your link Gary, and they asked me for my chassis number, but as its not an English registered vehicle, nothing showed up. I sent them pictures of the guard I want, but they said that without my vehicle details they wouldnt be able to find it.

I think this is the part number you want:

Yes Gary, Thats the one...
Thank you.
Now with that solution comes another problem......
They don't post to Ireland, and have recommended me asking my local toyota dealer.
Now that I have the exact part number, Toyota dealers may be a bit more helpful, so Ill try that first.
Iv also asked them can I get a courier to pick it up, but that will depend on costs too.

So off to see what my local dealer can do for me.
Thanks again.

And Its Ireland, There will be a Paddy Tax on it too.

How about getting it shipped to someone here who can send it on as a birthday present?
I use(d) Parcel2Go.com, there is another website, who's name I forget, where couriers can bid on shipping like a reverse ebay.

Ha ha Crispin, I didnt think of the Birthday present idea....
I had thought of getting it shipped to someone in England allright, and then getting it shipped over to Ireland.
It is something I will consider...But first Im going to ask a few Toyota garages local to me to see what they can do.
I may request some more help with this in the future.
Thanks for the offer!
Declan
S

Ok, My local Toyota dealer reckon that they can get it for me for €260 / £227 ( I rang a few and they all come in around that price)
so Ill probably end up going with that, I know its £50 more than Gary paid, but by the time I get someone to supply it and to post it to Ireland, id probably be looking at that too.
Thanks for all the help lads.
Now....
.
.
.
.
Whens Pay day???

Always too far away

That's why there are credit cards

AGGGHHHH!!!
Ok So last week I went to the Local Toyota dealer, and told him what I was looking for. In we went, and had a look at his computer, where after some searching, we found some pictures of a dog guard similar to Garys one, and a Part Number for Toyota Ireland. Righteo, I ordered it, and waited a few days, In I went yesterday to collect it, and went home last night and took it out of the Box, AGGGHHH Its not the right one, Its the model designed for use with the Tonneau cover, which I dont have.

So off I went back to the Toyota dealer, and explained this to him, and then to his Boss, and then to another guy.... They were stumped, apparently the one I wanted was an older model, which they have discontinued, and as I dont have a tonneau cover / Parcel shelf I now have to buy some more bits priced at €63 and drill two holes in the plastic lining in my boot, around the areas of the 12v outlet in the boot. So I brought home the Guard, and told him id see what id do.
I now am searching for one similar to Garys again. Except now I have a deadline.
N

Scubadec, you are welcome to get it posted to me here in NI and we can meet somewhere sometime and get it to you. most, but not all, UK people treat NI normally when posting is concerned. PM me if you want and we'll get it sorted. I'm in Dublin fairly regularly and could at least get it there for you.
You must log in or register to reply here.

A
Dog guard and boot liner surplus to requirements

Hello Everyone from Caron with Snow White a Landcruiser 80 Series & advice on a Dog Guard please.

R
Is This Hardtop Bracket Correct?