History of the Toyota Land Cruiser

From its humble beginnings in 1950 as a development project based on the design of the Willys Jeep, the Land Cruiser has taken its rightful place as Toyota's flagship four-wheel drive vehicle. All dates are Toyota model year, and not necessarily the year in which the model was released.

Development for the Model BJ prototype begins in Japan.

When the Land Cruiser (then named "Model BJ") was first tested in August 1951, it climbed to the sixth station of Mt. Fuji -- the first motor vehicle to perform this feat. The first orders for the vehicle were from police and forestry departments because of its off-road abilities.
1954

The BJ was formally named Land Cruiser, and it officially entered mass-production, rather than being built on a made-to-order basis.

The formal introduction of the Land Cruiser to the U.S. It was this year that the first hard-top version was introduced.

A pickup and wagon version of the Cruiser were introduced in Japan.

Land Cruiser is the best selling Toyota in the U.S.

The Land Cruiser moved toward the mainstream U.S. market with the introduction of the five-door station wagon, the F55. The wagon was hailed as a vehicle that was competent enough to drive through the back country, yet was comfortable and power enough to drive on any public street.

Mid year, the U.S. sales introduction of a hardtop version of the two-door.

The 3.8L engine was replaced by a larger and more powerful 4.2L version, making the Land Cruiser easier to drive. For the home market (Japan), Land Cruiser has almost always been available with a diesel engine -- originally 3.2L, reintroduced a 3.0L in 1976, and updated to 3.2L again in 1979 -- but was never officially available in the U.S.

The 2nd generation station wagon is introduced as the FJ80 and the U.S. Land Cruiser earns the "4x4 of the Year" award by Off-Road magazine.

This was the last year of sales for the FJ40 (although production ended in 1979).

Minor updates to the wagon took place in this year.

The 3rd generation of the wagon, the FJ80, was a larger, more luxurious vehicle that sported full-time four-wheel-drive and a fully independent four-wheel coil-spring suspension. It was named one of Consumer Digest's "Best Buys" and the "Best Full-Size SUV in Customer Satisfaction" by J.D. Power & Associates.

This model of Cruiser was a far cry from the 1953 model, sporting optional leather upholstery, available seating for eight, an available compact-disc player, manually, locking front and rear, and automatic locking center differentials, Land Cruiser was now a shadow of its former self. This Cruiser was again named "Best Full-Sized Sport Utility" in IQS, J.D. Power, and among "Best Buys" by Consumers Digest magazine.

Changes were minimal (changes have only been made when necessary). The only change was the addition of CFC-free air-conditioning. Among Consumers Digest "Best Buys".

In 1995, Land Cruiser took a large step toward additional passenger safety. With more and more consumers, using their "sport-utility" vehicles as passenger cars, and those consumers looking for vehicles that offer enhanced safety features, Toyota was ready. Along with a new grille featuring redesigned headlights, the 1995 Land Cruiser included as standard equipment, both driver and passenger side airbags and adjustable shoulder-belt anchors, and ABS. These additions did nothing to diminish Land Cruiser's off-the-road abilities, though, and it continues on as the most refined, most capable four-wheel-drive vehicle on the market.

Toyota introduced the 5th generation Land Cruiser, the first all new Cruiser since 1991. The new Cruiser is larger, heavier, structurally more solid and substantially more powerful than its predecessor. Yet it delivers improved fuel efficiency, lower emissions and considerably quicker, more responsive acceleration. It also features the first V8 engine in a Toyota Division vehicle. The all new 4.7L 32 valve DOHC produces 230 horsepower, 18 more than its predecessor's inline six-cylinder, and 320 lbs.-ft. of torque, an improvement of 45 over the '97 model.

The Land Cruiser is built at the Araco Corporation plant in Toyota City, Japan

And here's a nice picture: 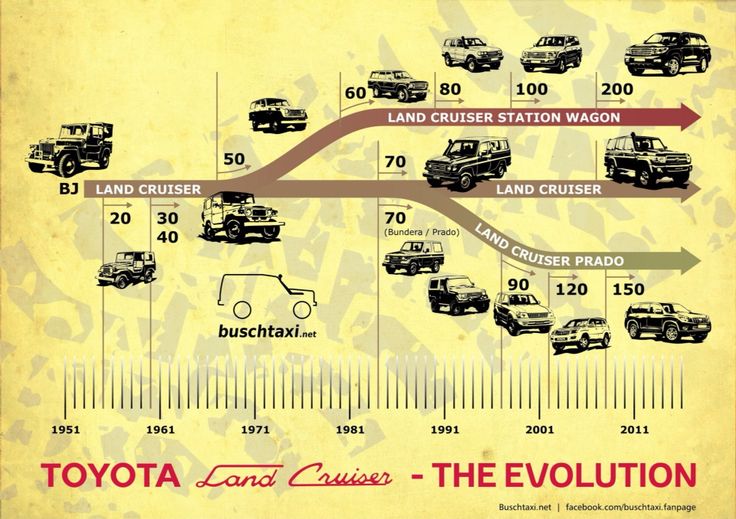 Thanks for that, never actually looked at the LC's history before.

The 2nd generation station wagon is introduced as the FJ80 and the U.S. Land Cruiser earns the "4x4 of the Year" award by Off-Road magazine.
Click to expand...

The true start of the line might be the AK10 which was made towards the end of WWII. Google image search will turn up some photos, it had a 2258cc 4 cyl petrol engine and I think it was really quite beautiful.

Although the early designation BJ suggests the first Land Cruisers were powered by the diesel B series engine what I have read says it was powered by a six cylinder 3386cc gasoline (petrol) engine. The engine was much bigger than anything used by Jeep or Land Rover and came from a truck.

The BJ was followed by other BJ models, including the BJ25 and then when the F engine arrived the FJ25.


Lots of information on this site; http://www.toyota.com.kw/English/toyota ... /home.html

And I thought that I was mad about Landcruisers, mate you have gone next level with the history, thanks means I have hope yet....
Don't like the adverts?  Click here to remove them
You must log in or register to reply here.