Wholesale Automatics in Australia do a temperature gauge kit for 80 series Landcruisers with the A442F automatic gearbox. This thread is from an install on the all electronic A442F but I imagine the cooler unions are the same on the hydraulicly controlled only A442F (that I think of as an A440F!). Heat is a killer of auto gearbox's and by the time the OEM warning light comes on you're already doing the box no good. I think a gearbox temperature is as important as the engine temperature gauge - so you can see everything is ok or get an earlier warning of a developing problem and should be high on the list of essential mods IMO.

The kit comes with a modified output cooler union that's been drilled and tapped for the temperature sender. Modified is on the left, original on the right 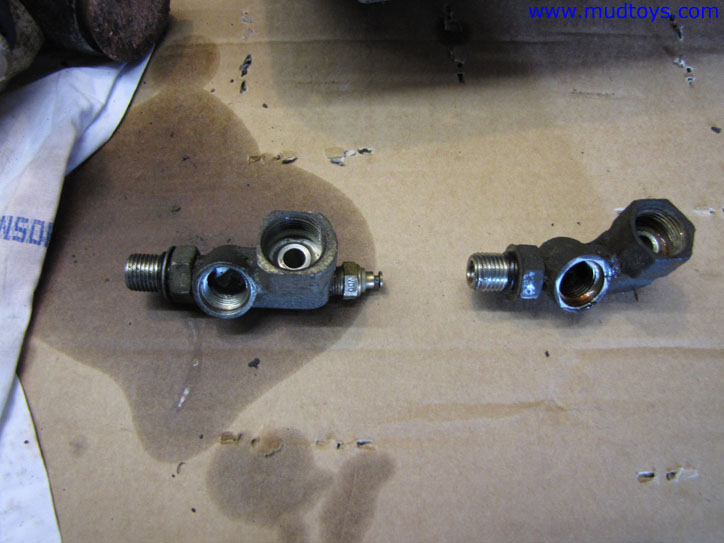 This is the original in place: If you crawl under your truck you won't get such a good view, the front prop shaft is in the way Make sure the wheels are chocked, handbrake on etc and remove the front prop, might as well check the UJ's and splines while it's off Disconnect the OEM temperature switch that the yellow arrow is pointing at. Don't bother undoing the sender just yet. You need to undo the 22mm fitting that the green arrow is pointing at. These seem to be really tight so you'll need a 22mm spanner or crow foot, not your adjustable or grips! Undo that till you can lift the pipe clear of the union. Once that joint is cracked open it will start dripping some ATF on you. Then undo the 19mm lock nut the red arrow is pointing at and rotate the union to gain easy access to the OEM sender. Remove that sender now (19mm deep socket or spanner) you won't be able to undo the union with it on. Now screw the union off.

Re-assembly is the reverse process. I didn't reconnect the front prop until I had run the truck round the block a few times and I could be sure everything was tight and there were no leaks. If it had of needed tightening a little if would have been difficult with the prop in the way!

The install of the gauge itself is just a matter of running a wire from the sender to your chosen location and giving the gauge power and an earth but this post isn't aimed at covering that.

Overland Cruisers are the UK dealers for Wholesale Automatics kits, I don't know of them being available from anywhere else in the UK.

PUNT!!!
You must log in or register to reply here.

B
Coolant temperature gauge installed, but how badly have I screwed this up?

Changing from 4 speed to 5 speed gearbox on LC 100