The Wholesale Automatics Extreme valve body for the A442F automatic transmission is a handy piece of kit, you can google to get the low down on exactly what the benefits are, but the installation might scare some people off fitting one. I fitted one to my now RIP 80 and the gearbox from that, complete with Extreme valve body, found its way back to me recently and I took some pictures while I did a swap over with the valve body in our current 80. This'll give you some idea of what you'll take on if you get one or why you'll pay a bit to get the job done for you.

Put the handbrake on and chock all 4 wheels so you can put the gear selector in N. Drain the ATF and leave it draining for quite a while, the more comes out now the less there is to drip on you later While it's draining, remove the dip stick, loosen the upper dip stick tube bolt and remove the lower dip stick tube bolt. You can remove the top bolt and remove the top tube completely if you want but leaving it in place is simpler IMO. When it's finished draining, put the drain plug back in, undo the 4 x 12mm bolts holding the pan skid plate on, then undo the many x 10mm bolts holding the pan on. For the rearward pan bolts that the cross member gets in the way of, I find a 1/4" drive socket, extension and nuckle is small enough to get in there but a 3/8" drive is too big. The pan will either be FIPG'd on or have a cork gasket, either way it might need a bit of a tap to make it break free.

I put a largish piece of cardboard under the gearbox area while I'm doing the dissasembly and have a pile of rags to hand. If you can keep the spillage to the cardboard / rags you can later push them out of the way to work and save rolling in ATF (you won't catch it all, just aint gonna happen!).

With the pan off, the filter and underside of the valve body is exposed and your ATF shower starts as there will still be some drips: 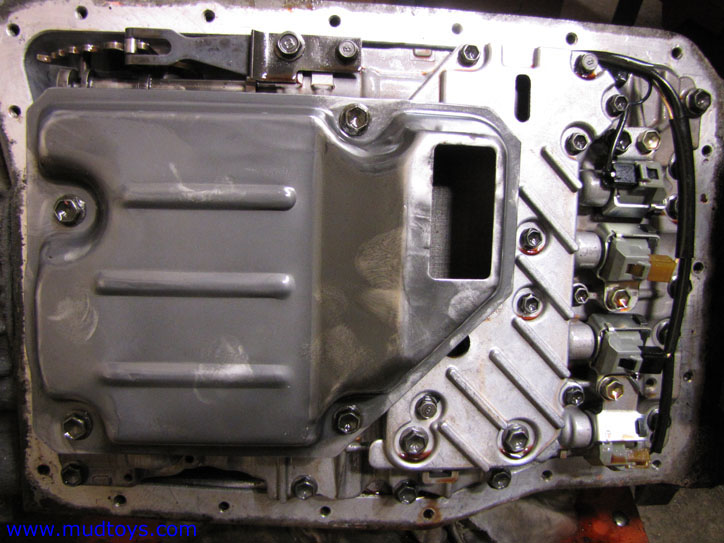 Undo the 4 10mm bolts holding the filter on to fully expose the valve body: 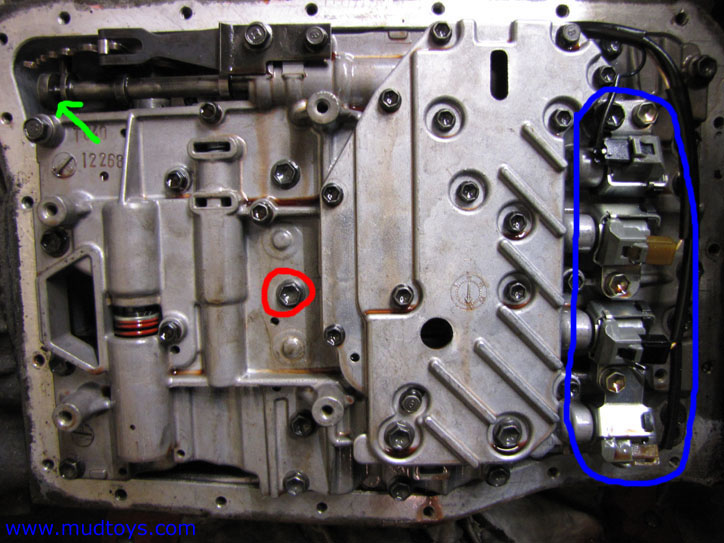 Disconnect the 4 solenoid electrical connectors (circled in blue), they're not very tricky but a small screwdriver will help to push in the lug while you slide them off. Then undo all the bolts holding the valve body on (21 IIRC) a couple of turns each, not all the way. The FSM identified the bolts for you (there are a lot that don't need undoing) but actually it's all the black headed 10mm bolts, the ones you don't want to undo are either smaller or shiney heads. As you're loosening these bolts quite a lot more fluid will start to come out and from various places so catch what you can in your oil pans and mop up the rest. now leave it to drain, could be 30-60 minutes but the longer you leave it the less will drip on you later!

When you're ready, remove all the bolts you loosened except the central one circled in red. Leave that one till last because it will hold the valve body till you're ready for it to come out. Next pop the bonnet and disconnect the throttle position sensor cable from the side of the injection pump. That's the cable that goes off down the transmission tunnel, just pull it out a little to give you some slack and get the nipple out the hole so the cable is free. This will give you a bit more slack to work with when the valve body comes off.

The other end of that cable connects to the top side of the valve body with another nipple and similar attachment method as up top. Move your oil pans out of the way, if anything drops out while you're removing the valve body you want to see it not fish about in the oil pan for it! I'll show you what can drop out later but it's not a big deal, just watch for it. So, undo that last bolt circled in red while supporting the valve body and put that bolt to one side on its own, I'll explain why later. The valve body is not particularly heavy but it's not a fether either! Lower the valve body, working from the driver side for easier access, you'll see the throttle position sensor cable and the spool it's connected to - carefully disconnect that. I say carefully because holding the VB with one hand while disconnecting the cable with the other can be a bit tricky.

With the valve body out of the way you expose more of the gearbox internals: The things that can sometimes fall out when you take the valve body out are the accumulator springs circled in blue and the centre support gaskets circled in red. The red ones you should be replacing with new ones anyway but the springs you need. I've only ever had 1 spring fall out at a time so I've never had to work out which is which if they both came out!

Transfer the solenoids from your old valve body onto the Extreme valve body. You just undo the 10mm bolt holding each one on and move it across to the new VB.

Here's the top side of the VB so you can see the spool the throttle position sensor cable connects to on the old VB. I've turned the spring loaded spool back and jammed a screwdriver in to hold it in place. I suggest you do the same on the new VB: 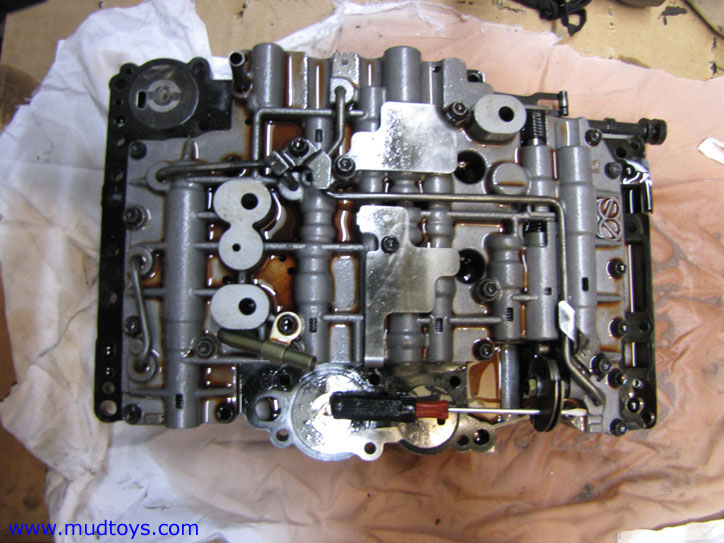 The Extreme valve body should also have some with a replacement spring to go inside the accumulator circled in green. The piston doesn't want to come out on it's own! Pump some compressed air into the hole the green arrow is pointing at while pushing up very hard on the piston next door. The piston next door wants to get blown out first so you have to hold it in firmly and hopefully the green piston pops out - literally, accompanied by a spray of more ATF Swap the inner spring over and push the piston back in, make sure both are seated firmly so they won't fall out while you're juggling with the valve body.

If the 4 little black centre support gaskets didn't come out on their own (often don't) just use a small screw driver to flick them out. They are only a suction fit - if you look you'll see little cut outs on one side of them and that side goes to the gearbox surface with a little oil on them so they stick. These gaskets can be right little buggers to get to stay put (bearing in mind they're on the underside of the gearbox so gravity wants to play with them) so I help things along with a tiny amount of silicon grease.

With everything ready, go back under the truck with the VB, working from the drivers side again for access to the throttle position sensor cable, make sure that middle bolt I told you to put to one side is within reach, offer up the VB and connect the cable to the spindle, carefuly withdraw the screwdriver so you don't damage the paper gasket, as you close the gap, make sure the peg the yellow arrow is pointing at locates in the slot in the piston the green arrow is pointing to in the 2nd picture and do this smoothly and 1st time so you don't dislodge the centre support gaskets, pop the middle bolt back in and do it all the way up again so that when you let go the VB doesn't drop and dislodge those gaskets. Now smile and have a rest and a cuppa, the worst is over

The bolts that hold the VB on are various different lengths so you'll need the FSM to identify which ones go where. Don't do any of them up all the way until they're all started. There's a printing error in RM314E that says one of the bolts is 18mm but it's 28mm. Just work your way through from front to back or whatever pattern takes your fancy and not that some sizes only differ by 1mm so get them right. The FSM will tell you what torqye to use on the bolts, from memory it's just 10nm so you'll need a small torque wrench to get that low.

Reconnect the solenoid wires. They can only really go one way round so not much you can get wrong there.

Refit the oil pan, locating the lower dip stick tube into the upper dipstick tube as it goes on. Make sure the upper tube is a good fit into the lower tube and bolt it back on.

I put 6l of ATF back in at this point and then roll the car down onto the flat so I can check the level. Start her up, don't panick if she doesn't want to move and don't try hard if she doesn't want to. Check the level and top the fluid up accordingly but it'll be around 7.5l at which point it's safe to go for a drive and get it properly warmed up for a proper level check.

I've done this a few times now, it's not a nice job and putting the VB back in place is a bit of a juggling act but the end result is good. I thought I'd write it up while it's fresh in my memory.

The UK dealer for these valve bodies is Overland Cruisers.

Next installment - installing the cooler union with the temperature gauge sender.

Very informative. The A442F transmission on my 80 is booked for "open heart" surgery next week.

that's good going, guess it deserves a bit of TLC after all that distance though and I hope it goes to plan.
You must log in or register to reply here.