The drivers side front drive shaft on my 100 was in need of some attention so I bought a complete new assembly from Ian so I could just swap a new one in and then use the old one as a spare. Minimum down time and also as I get a small vibration at a speed a bit over the limit I can eliminate this assembly from my search for the culprit (yes the props have been rebuilt and it happens with different wheels and different tyres and the diffs have been rebuilt twice!)

I've touched on what has to be done in my diff threads but I took a few pics today to fill in some gaps.

I'd got as far as disconnecting the ABS sensor wiring, taking the brake caliper off, the dust cap off the end of the hub and the snap ring before I thought about it though. Just zip tie the caliper out of the way, you do not need to disconnect the brake pipe. To remove the ABS sensor wire, just follow it back to the engine bay undoing the clamps as you find them and unplug the wire where it plugs into the loom on the inner wing. I'm assuming here that your sensors are seized in place like mine which after a few years is more than likely the case. 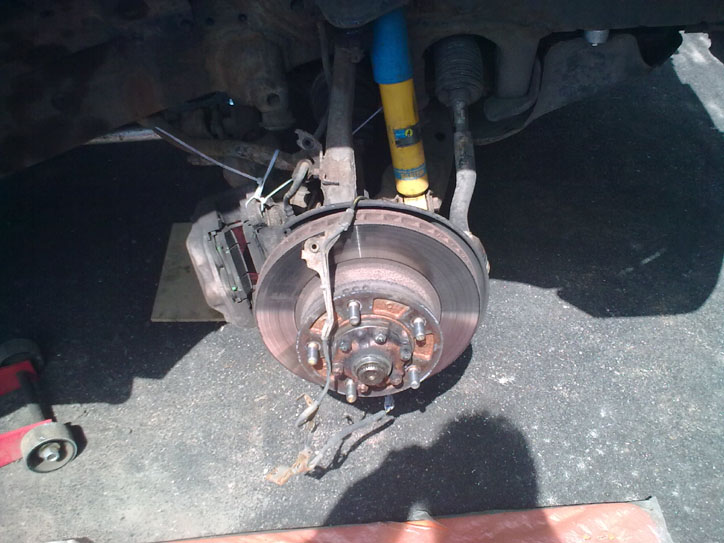 Then you need to disconnect the steering arm. There are just teo 19mm bolts holding it on so undo those and zip tie the arm out of the way: When undoing the ABS wire clamps, when you get to this one make sure you seperate the two clamps because the ABS sensor / wire is comming off the vehicle with the swivel but the brake caliper / pipe is staying on the vehicle. The green arrow in the pic below shows the clamp I'm talking about and don't forget to also undo this brake pipe clamp and don't forget the snap ring has to come off the end of the drive shaft 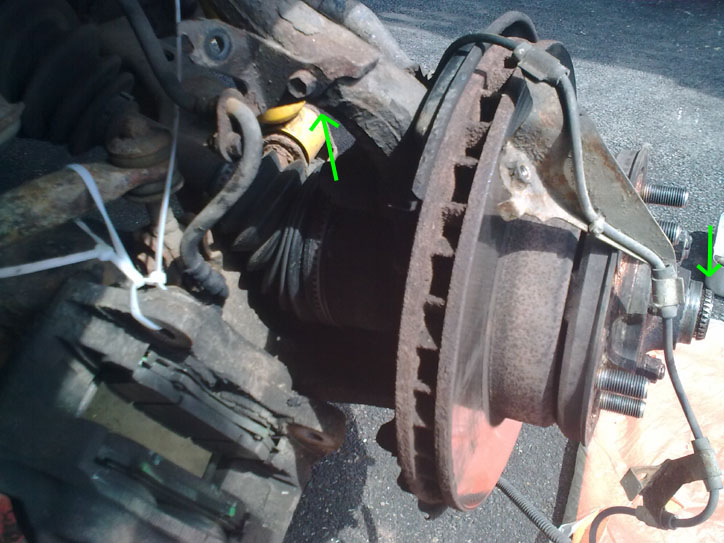 Steering arm tied out of the way: Remove the split pins from the suspension upper and lower ball joints and remove the nuts. You might as well remove both nuts now rather than one at a time as you split the joints as it'll be easier. Now smack the upper joint with your nice big copper faced hammer - there are flats on the casting that could have (and probably were) made for the job. Within a couple of hits it should fall off: 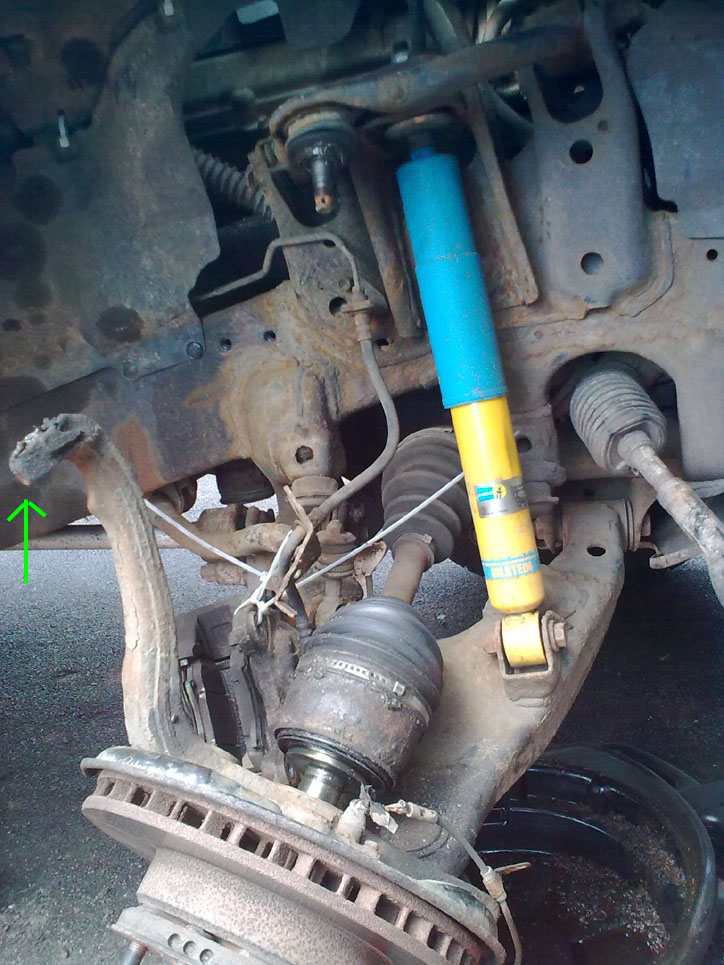 Hold the swivel upright and now hit the lower joint in a similar fassion till the bottom joint comes apart and then you can just pull the swivel off the end of the drive shaft: Push it into the side of the diff and then use your copper faced hammer to drive it all the way in. I chose to squirt some fresh grease into the ball joints with a grease gun adapter made for the job: Offer the swivel back up to the truck, locating the end of the drive shaft into the swivel and then onto the lower ball joint and do the lower joint nut up. Then put a jack under the lower arm and raise it a bit to close the gap to the top arm. I then use a bar to force the upper arm down to locate the upper joint: 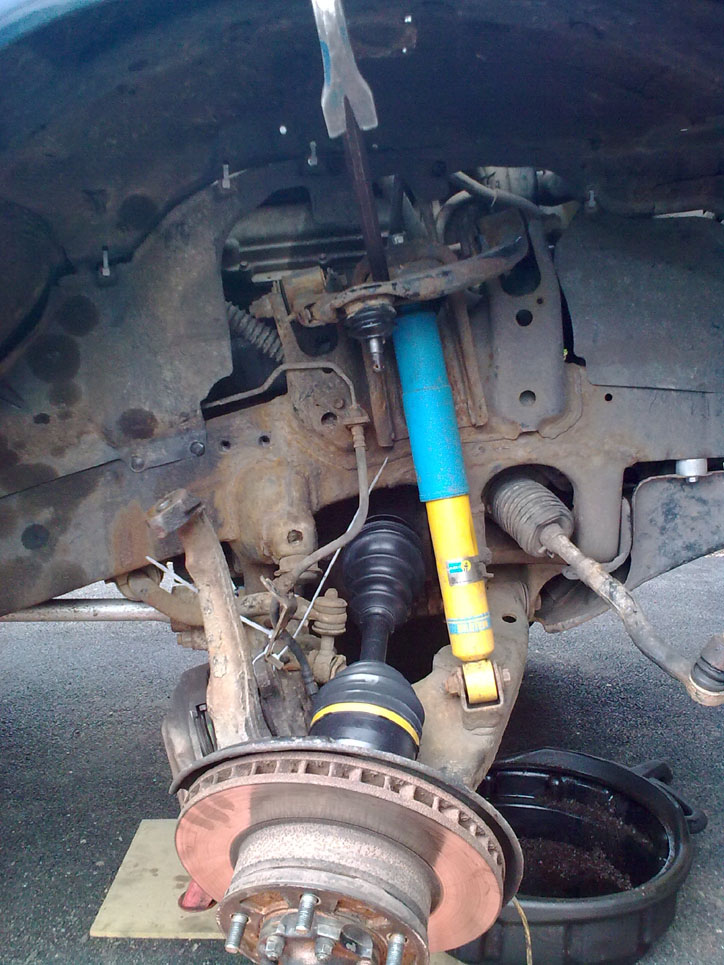 Then you just put all the other bits back together

Don't forget a bit of thread lock on the steering arm bolts.
A

Great write up - did it solve the problem or just eliminate a suspect?

adrianr said:
did it solve the problem or just eliminate a suspect?
Click to expand...

Also it doesn't always do it so it's one of those things where I won't know for sure until I've lived with it for a while.

Jon
Good to see yours looks pretty much the same as mine
Did the new drive shaft come pre-packed and ready to go?
Don't like the adverts? Remove them by becoming a supporting member.   Click here

Julian said:
Did the new drive shaft come pre-packed and ready to go?
Click to expand...

Yes, just have to take it out of the packaging and it's ready to go

The weight / courier charges make them more expensive than usual though, just so you're forewarned

If it doesn't fix my vibration problem, so then I know the old one is ok, I'll take the time to rebuild it but if the vibration is gone then I'll just keep it as an emergency spare as then there's obviously something wrong with it.
You must log in or register to reply here.
Share:
Facebook Reddit Pinterest Tumblr WhatsApp Email Link
Top Bottom
✖
AdBlock Detected