Best they could do when the people writing emissions regulations had them set to suit their own digital cheat .

Thank you all so much for your input. Many of you have hit the nail on the head "Rightly or wrongly most of us believe the older Cruisers are stronger because they are less complicated (a shared aversion to electronics) . " This is precisely why I loved my Fiesta so much and am weary about the newer 200/300 series. I'll definitely look into the J70/80 as this seems to be the fourms' recommendations..

"If I could afford a new one then I would but the extensive electronics are a bit of a put off." Yeah the new ones are within budget but extensive electronics scare me to death. I'm after something that can be fixed in back end Uzbekistan by a guy with a hammer and neither of us can speak one another's language. I don't want to be in the arctic with electronic failure!

Scott said:
Welcome Dan, sounds like a great trip in the fiesta.
The Adventure Overland Show is this weekend, it’ll most likely be the biggest gathering of all types of Land Cruisers in one place, in the UK. Book a ticket and come and chat Land Cruisers with the guys and girls on the stand, it’ll be the best introduction you can get.
Click to expand...

@Scott I saw this reply a little bit late, A quick google shows the event being in September have I found the right event? Stratford-upon-Avon Racecourse?

With that budget it might be worth looking into getting a Troopy imported from the Middle East. I'm sure someone on here did a thread about it a while ago. If I remember correctly they got a really good one at a pretty good price, although the shipping container world has been turned on its head so shipping it over here might be expensive.

If you are going to be doing a lot of travelling in it (especially the Pan Am) then maybe look at getting a LHD.

@nick_the_fish Thanks Nick, in all honesty, if I were to purchase one overseas I'd likely register it out there and drive it back hahaha so no container needed. Pan Am sadly is on the last on my list for the Landy, (But I've explored a lot in a rental) I'm UK based so with easy access to EuroAsia there's a lot left for me to explore. My pencil plans are returning to Northern Russia where I have a large social network then head south, likely south of the Himalayas exploring SE Asia into Turkey then East to Iran/Afghanistan. I'd love to visit Pakistan also the the route is logical enough to stick to Arabian Sea countries... but this is all pencil plans. RHD for me is the way forward... I rented a JEEP when exploring West Coast and the offside dimensions throw I cant judge distances... I have a weird driving history where I have clocked more miles driving on the right hand side of the road than the left (like we do in the UK) I'm happy enough in a RHD and am well aware of overtaking hazards

You learn overtaking hazards quickly when driving across Siberia

Whats a Prado? Is this simply the Cruiser's name for European sales? Shorter wheel base? I'm also coming across words like: 'invincible' 'utility' are these trim options? If some one could give me a laymen low down that would be appreciated please

With regards to the Prado model, it originates from the light duty 70 series Japanese domestic market JDM, then to 90 series and no knowledge if the 120 or 150 series has a prado line. But it leans toward the light duty vein of LC's.
Light duty doesn't mean they're light in performance but it means you're not traveling heavy! To the best I can describe..

I'm not sure even Toyota are quite sure themselves what Prado signifies . As Iwan says and as far as i am aware it was first seen with the 70 series , and without having Iwan's indepth knowledge of the 70 it looks more to me like they decided to market their thoroughbred deep mine workhorse to a wider audience , similar to landrover built the discovery because the defender was a bit to rough around the edges for many .

I think the step towards independent front suspension and knowing Cruiser owners wouldn't like it had them wondering about a rebrand . The 90 series is called Prado , Landcruiser , Meru , depending on where it is sold despite being an identical car plus or minus a few bolt on goodies .

I never heard of a 100 series Prado but i'd not be at all surprized if they were sold somewhere ?

The 120 is also called a Prado or a Landcruiser depending on which global market and is again identical regardless , perhaps there are others I don't know ?

As is already established in this thread most of us prefer the older tougher less electrics models hence the move away from traditional design (independent front suspension) bought them a label for being light duty .

A marketing attempt to move away from the rugged bruiser image they had built up for themselves over decades in order to appeal to a much wider and more gentile audience was bound to prompt some backlash from outback joe and beer can crusher bob .

Solid axles alone are heavy , a lot heavier than the components of independent suspension , so i suppose the truth of the matter should be found in comparing curb weights . If frame and body are built as robustly the difference in weight should not be more than two thirds of an axle weight . 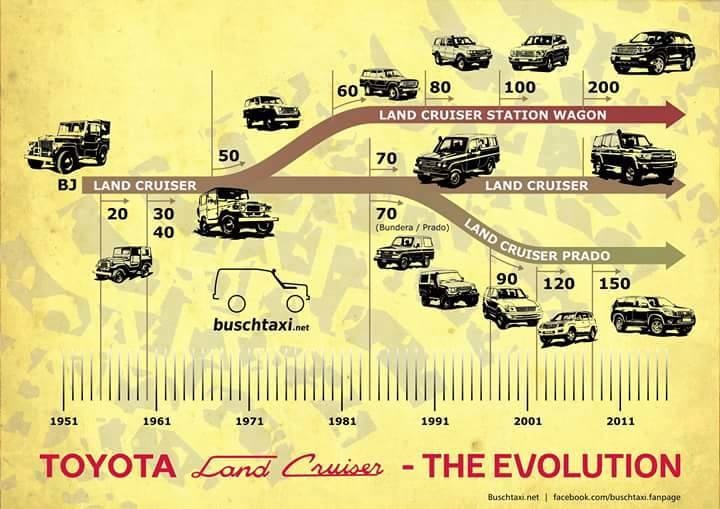 Just thought the 100 series didn't get the Prado badge because they marketed it as a Lexus , in America anyway .

Amazing replies @GeekOKent @Iwan @Shayne Thankyou the images especially helps. with regards to: "As is already established in this thread most of us prefer the older tougher less electrics models hence the move away from traditional design" Is there basically a cut off that I shouldn't be looking at? The 300 is definitely a no go due to electrics, how do the post y/r 2000 models stack up? I'm reading there were upgrades such as reverse cameras etc but for the most part mechanically sound?

Shayne said:
Just thought the 100 series didn't get the Prado badge because they marketed it as a Lexus , in America anyway .

'75% of the world is covered in water, the rest I covered in my land cruiser'

@dangor the way to do this is to get some time in these trucks. The vehicle you feel most comfortable in, can repair on the road if needed, run on the fuel you need, and was sold in the areas you are going, can hold the kit you want, with the people going with you, is safe and will bring you home, is the one you want.

I know Scott has his immaculate 105 up for sale
You must log in or register to reply here.

C
Hello Everyone from Caron with Snow White a Landcruiser 80 Series & advice on a Dog Guard please.