So here is my fag packet diagram of what I have currently. I am running an on-off-on carling switch with a perm live and ground (from the aux battery). The switch has 2 live "outs" (1+ & 2+), as you can see 1+ runs to the relay which is wired directly to the battery and then onto the light bar. So far I am able to use the switch to turn the light bar on permanently even if the ignition is turned off which is the way i want it.

Next i want to know how to use the other switched out (2+) to enable the light bar to only come on when the lights are switch onto brights BUT to not turn on if the switch is off and the light are switched onto brights.

I have worked it out but am going to have to use another Relay and was hoping to just use the one. 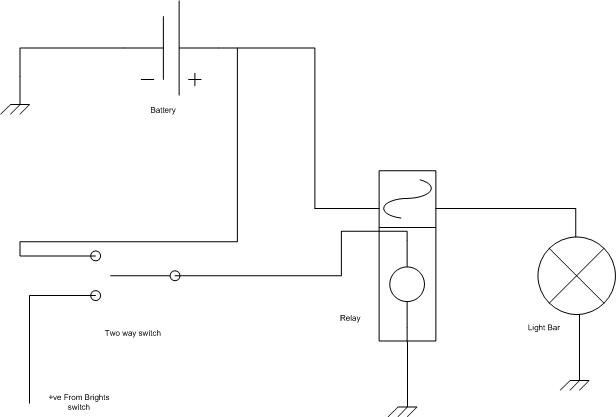 You could also do it with two switches... not ideal either. In the above just add another switch inline from the brights circuit. That's how I did it with Lil'Blue

As Tony has shown above, flip your use of the switch so you have a common output and 2 inputs to choose from. That's how I wired the extra lights on mine.

Here is my thinking. Is the live feed from the head light when switched on able to also power the light bar and would i need to upgrade the cable thickness to handle the job?
Do i need a fuse where the question mark is OR will the headlight fuse do the job?
Can i take the live feed from relay two once switched on across the the out of relay one and the to the head light or do i need two separate lives from each relay going to the light.

Its all working as it should so thanks for the help. the one thing that i cant seem to work out is the following.

The carling switch turns orange when switched to either on with the constant live or on when the bright light are turned on BUT it also stays on when in the off position and cant wok out why.

Below is the wiring diagram I have except the fuse which I forgot to draw but its there.

Below that is the terminal instructions for the switch. As Jon mentioned i have reversed the power out 1 and power out 2 so that instead of power out its power in and i can select between the contstant live and the bright lights on live. With the original power in now being the power out to the relay.

Any ideas as to why i have the orange light on when in the off position???? 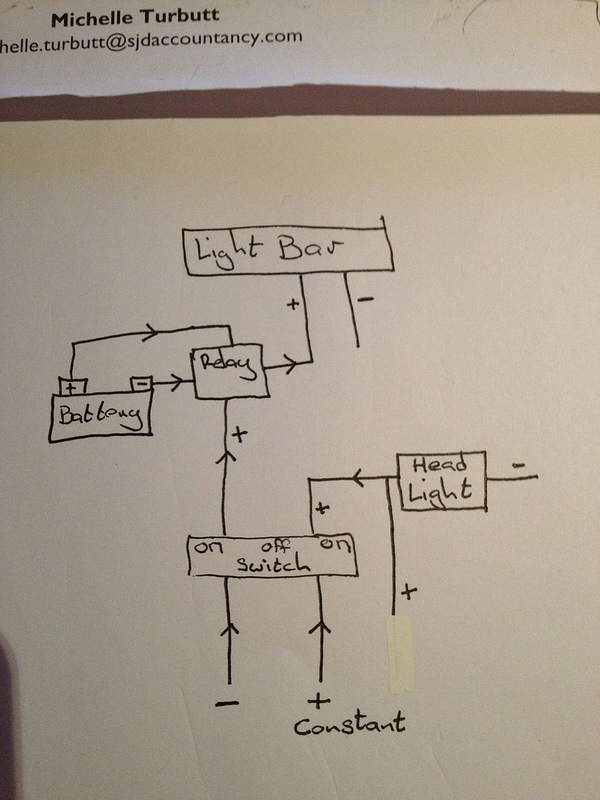 the orange light inside must be connected to what are now the 2 input terminals so it always thinks it is 'on'. Maybe you can open up the switch and change what it's connected to?

It would seem this is a common problem. Google is your friend on everything these days.

Here is the solution:

Bingo. All working as it should and no more than a 5min mod.
You must log in or register to reply here.

Winch isolator - solenoid or not???

Current Draw when switch is turned to ACC

A single mains battery charger that can run on 110 and 240 volts?