Still getting hissing from filler cap when opening, cleaned out inside the cap but still doing it.
I hear there is a fabled tank breather but after a quick look can't find it, any clues to location?
Will be doing the pick up pipe at the weekend also, will do a write up.

As far as I know, certainly on the 90, the manual says that it is SUPPOSED to be under slight pressure. Positive, that is not negative.

Just been trawling through "the other place" and found some links from Julian and Ecky. Not sure if mine really has a problem but goign to start on some waxoyling soon so want to get these little jobs out the way before i do it.

As I understand it, there is a vent in the cap which you have sorted.
The other one runs rearward from the offside of the tank, goes through a valve affair which presumably doesn't let liquid i.e. water get to the tank and then down into the rear cross member.
This is a rubber pipe entering the cross member somewhere near the LSV. You can pull it out and there is about a foot of pipe inside.
Mine is still at negative pressure so this pipework is next in line for a clean out for me.
Don't like the adverts? Remove them by becoming a supporting member.   Click here

Well, i had 5 mins so thought i would have a look at the breather. Pulled the pipe from the rear cross member and got half of salisbury plain in my face. Pulled the pipe off the valve and found it completley blocked, partly because the cross member was full of crap and had grass blocking its drain holes.
After cleaning the pipe i thought i would remove the valve and clean it but no joy even with hot water and compressed air so i cut it open. 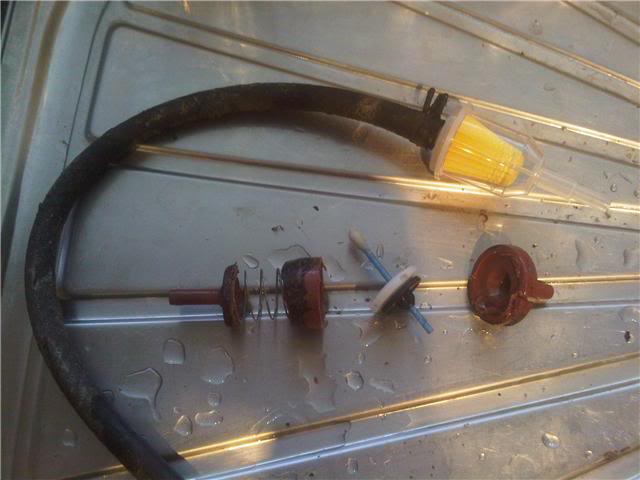 As you will see, it is just a valve with a spring and diaphram and was blocked solid so i popped off to Halfrauds and bought a fuel filter to fit in its place. On the way there i cold not believe the difference, its like a new car, no joke, so much smoother and lots more low range grunt, will try it on the motorway tomorrow. 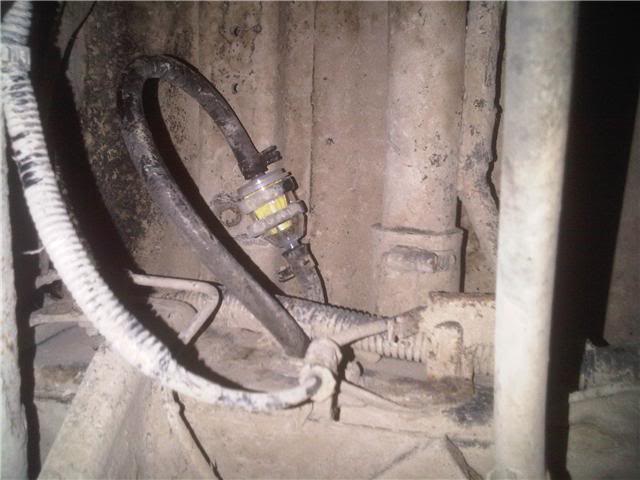 So now all fitted and working great, will check the price of a new one tomorrow when i pick up my EGR gaskets

good find, ill have to check mine

If you extend the breather up so that it will never get any water inside the pipe do you need the valve in place?

I now have the pipe to do my axle breathers so was going to do them at the same time.
I think it needs some kind of obstruction to stop fuel going up it.

Paul said:
I now have the pipe to do my axle breathers so was going to do them at the same time.
I think it needs some kind of obstruction to stop fuel going up it.
Click to expand...

I think if you lifted it up above the filter/injector pump then it would be perfectly safe.
I have been toying with the idea but it needs to be high up and external. I had thought about going up inside the D pillar but that would mean it venting into the car, definite no-no.
I am going to take my axle breathers up the snorkel but that would be two extremely long pipes from the rear axle and fuel tank.
A

If it helps, when I took mine off last night (and thanks for the heads up and the photos Paul, greatly appreciated) the arrow on the casing was pointing away from the tank. when i blew on the ends it only releases air pressure away from the tank.

adrianr said:
If it helps, when I took mine off last night (and thanks for the heads up and the photos Paul, greatly appreciated) the arrow on the casing was pointing away from the tank. when i blew on the ends it only releases air pressure away from the tank.
Click to expand...

My tank is almost always at a vacuum even with the filler cap cleaned. If the valve only works that way round then that wouldn't help the vacuum issue. Perhaps a straight through pipe high up is the way to go

adrianr said:
If it helps, when I took mine off last night (and thanks for the heads up and the photos Paul, greatly appreciated) the arrow on the casing was pointing away from the tank. when i blew on the ends it only releases air pressure away from the tank.
Click to expand...

My tank is almost always at a vacuum even with the filler cap cleaned. If the valve only works that way round then that wouldn't help the vacuum issue. Perhaps a straight through pipe high up is the way to go

Now if this is the case then how did it help with Paul's performance? Im not doubting any of the statements above, i just dont understand how removing a pressure relive valve would cause an increase in performance, it doesn't make sense?
A

if his valve in the filler cap is not working properly?

adrianr said:
if his valve in the filler cap is not working properly?
Click to expand...

Thats what i was thinking, it may not be due to the pressure relief valve. I have just checked on ToyoDIY and the you can buy what seems to be the valve in the filler cap 77316-16010 for about €7.

I imagine that with a vacuum in the tank, the pump is going to struggle slightly in pulling through the fuel. By removing that valve and just putting in a filter the vacuum problem is solved.
I have stripped and cleaned my cap but there is still a vacuum created. Obviously the valve is beyond redemption even though it looks okay. With the valve underneath only being one way then this won't solve the vacuum issue.

I would guess that if the fuel pump doesn't have to struggle to draw fuel, this could assist performance although I would guess it is barely discernible.

I had cleaned out the cap vent a while back and was surprised when i was still getting hissing when opening the cap, but it always seemed to drive better after fill ups.
I just tested the performance to be sure, to those of you who know it, i went up the M3 through the Twyford cutting, i can get over it in 5th gear normally as long as i dont have to lift off the throttle and i'll be doing 60 when i get to the top flat out. Now it goes over in 5th at 70 no worries and as soon as i got home i took the fuel cap off and no hissing, and does seem a bit nicer pulling in 3rd.

Like i said, the pipe on the tank and the valve was completley blocked with mud so even if there were no increases in performance its still a valid service item and worth a look.

Well, I checked my cap and that was fine. But I have been surprised with the performance of the vehicle so far having driven others. I figured that it was fuel adjustment, but having read this post, today I took the cap off and ran without it. Blimey Charley!!!! Instant improvement. Unless I am going mad (Oi, leave it..) feels much livelier. Really. Less smoke too. Need to investigate the breather when I can, so I cannot confirm positively. Went down the Motorway in it today and it cruised ok, but had no power at all. Bags of torque but no power.

Well, for my two bits worth I did the cap and the breather yesterday. I too always got a bit of hissing whenever I filled the truck up.

). I admit it may just be wishful thinking but I'd swear it's running better especially in terms of low down (off boost) pick up.

OK, quick punt on the fuel tank thing. As I said in my initial post, the tank is SUPPOSED to run under positive pressure. This I have read. That's why you get the hiss. It's normal. But if there is too much pressure for any reason, there needs a safety valve, venting outside the tank. Clearly you also need to let air in to replace the fuel used, but running under pressure (which helps to push the fuel along) and letting air in as well is a fine balance I guess. What you don't want is negative pressure at all. So if you use fuel faster than you can get air in you starve the pump. I would hazard a guess that the cap allows pressure to build up from fuel vapour and as the tank level falls it keeps a slightly +ve pressure negating the need for fresh air to be drawn in. If there is pressure, you don't need new air - right? This way you'd probably get a bigger hiss when the tank is empty. However, if insufficient vapour is produced, say during cold weather or on demand by a 4.2 lt engine during acceleration then fresh air needs to be dragged in quickly to allow fuel to leave. Not under pressure as it would prefer, but at least without drag as it were. So I reckon the the cap lets pressure out and the breather lets 'emergency' make up air in. That's why it's filtered. If it gets blocked - ('cos it sucks in dirty air all its life) then the tank gets a negative pressure inside.

i would agree with you but i say its the other way round, cap lets air in and breather lets air out. the design of the cap means you need negative pressure for it to operate, and i think les mentioned that the breather valve underneath only let air out (he blew into it). It would make more sense to draw in air higher up as its more likely to be dust free and water free. that's why i don't think replaceing the tank breather valve with a filter is a good idea, you could potentially draw water in when wading IMO.
You must log in or register to reply here.
Share:
Facebook Reddit Pinterest Tumblr WhatsApp Email Link
Top Bottom
✖
AdBlock Detected