The air-con compressor magnetic clutch pully had got very noisy on my truck and I changed it. This is on a petrol model, the diesel will be different although the way the clutch fits together is the same they just have different pulleys and they're in different places.

With the front under tray removed (can't really call it a bash plate can you!) access to the compressor pulley and drive belt tensioner is not too bad. The tensioner has a 14mm head bolt, turn it anti-clockwise to release tension and it's spring loaded so it returns to the tensioned position as you release the pressure, very easy: 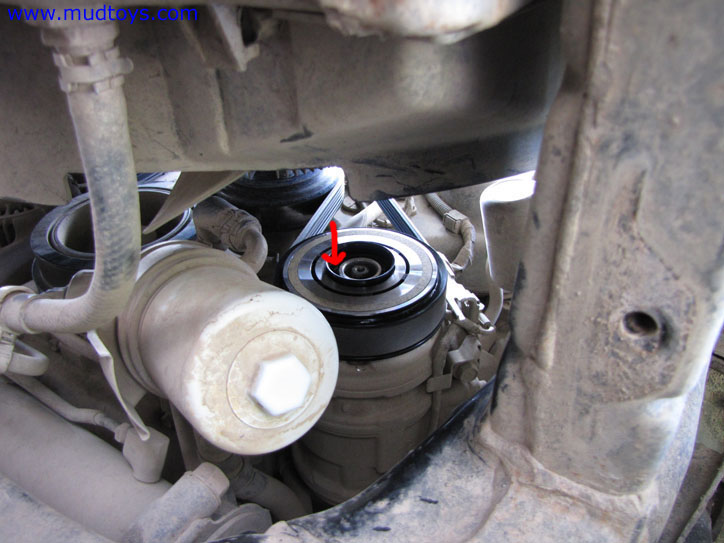 The red arrow is pointing to where there's a circlip. Unfortunately you can't get a very good view of it but with the help of a mirror on a stick and a bit of patience I managed to get it off undamaged. The clutch 'assembly' I'd bought from Toyota didn't include a new clip even though it's supposed to be replaced so it was important not to distort the old one. Once that clip is off the pully assembly can be persuaded off with careful prying with a screwdriver or a really short puller if you have one. With the pulley off the magnet pack is exposed: 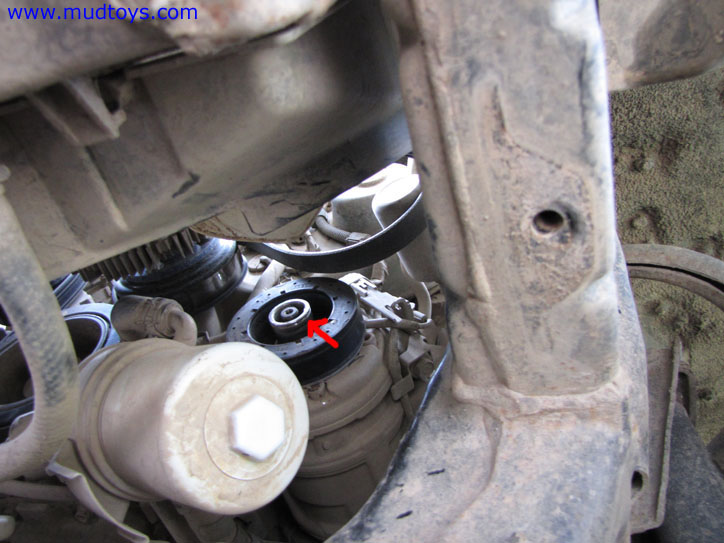 The red arrow is showing the groove the clip sat in. The magnet is also held on with a circlip but as that's working fine I left that alone rather than struggle with another clip. These are the old bits at the back, new at the front: The red arrows are showing the circlip and where it goes, the green arrow is showing a small shim and where it goes. According to the EPC there are different sizes of shim but it wouldn't give me part numbers. I checked the clearance of new to old parts and it looked like the existing shim would be fine so I just put that back in. The bearing in the old pulley was very rough and wouldn't have lasted much longer.

I put the new pulley on, installed the clip using my mirror on a stick to make sure it was properly seated, and re-installed the drive belt so I could start the engine and check everything seemed ok so far which it did. Then just push the drive plate back onto the drive shaft and re-fit the bolt that holds it on, job done and it's nice and quiet again.

I used part no. 88410-60410 and my truck is an 2001 UZJ100 with single aircon. The dealer had to order 3 different assemblies to find the right one because the EPC wouldn't tell them which part to order.
You must log in or register to reply here.