Appreciate your thoughts on a BJ43

Folks,
Looking at a BJ43 based in France, looks like it has had a bit of work to remove rust and the front panels are fibre glass!!
What do you think its worth, anything look a bit dodgy? Any thoughts would be welcome.
Thanks
Craig 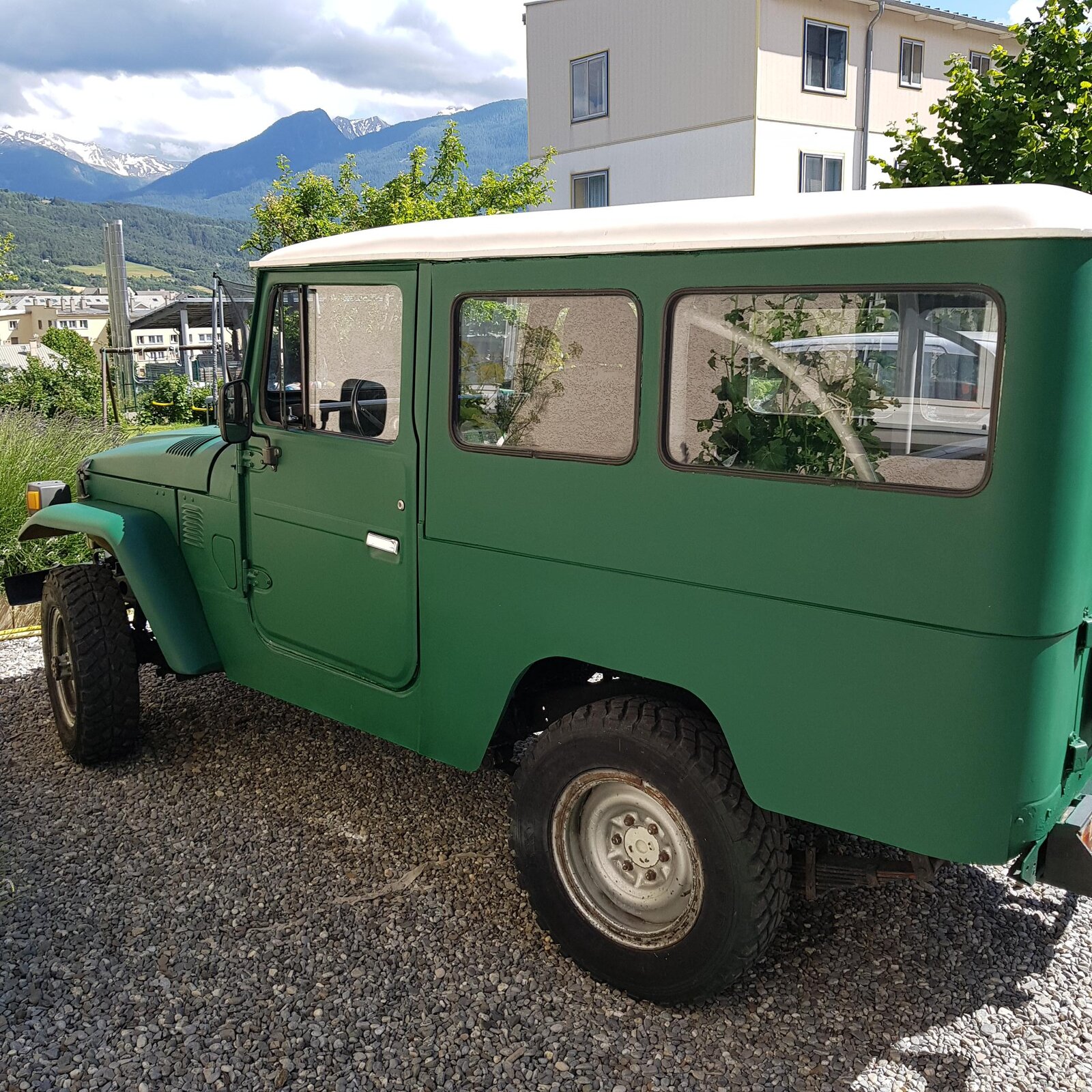 Toyota Land Cruiser BJ 43. Technical control OK from June 2020. Winch, hitch and hard top. It is a 2 seat registration card but I installed a bench at the back. New radiator and 50 amp alternator. Fiber front wings and part of the body was redone in galvanized steel by the previous owner (rear wings and rear bucket). Possibility of removing the hard top to transform it into a convertible. Thanks Tony, a lot less than that, but the import cost need to be taken into account.
Don't like the adverts? Remove them by becoming a supporting member.   Click here

David said:
They should not be any duty to pay from France at the moment
Click to expand...

Thanks David, more about getting transported to the UK and then registration etc.

tonytoyota said:
Hi wot about me blue 40s have a look on 40s for sale .
Click to expand...

Tony, We have had a few discussions on the Blue 40, this BJ43 is cheaper.

Quite a rare beast that looks to be fairly original.
Few jobs to do: replace f/wings with steel, running boards (although it looks like the hangers for the steps have been removed and they have the the front body mounts on them but they are available) and a few other bits. And a winch!
All a great basis.
When all the current restrictions are lifted, I have a mate travelling to the UK from Spain with an empty car trailer. Maybe he could collect and transport it at a realistic price for you. Pm me if it could help.

Rodger said:
Quite a rare beast that looks to be fairly original.
Few jobs to do: replace f/wings with steel, running boards (although it looks like the hangers for the steps have been removed and they have the the front body mounts on them but they are available) and a few other bits.

And a winch!
All a great basis.
When all the current restrictions are lifted, I have a mate travelling to the UK from Spain with an empty car trailer. Maybe he could collect and transport it at a realistic price for you. Pm me if it could help.

Thanks Rodger, couple of questions:
Where did you get the above picture from? lots of good info.
Good to get your thoughts, my main concern is the fact that the rear bed has been replaced, and not sure what kind of job has been done, does the rear axle support look OEM?
I might take you up on the car trailer, as I have a quote from a company who does the transport and also the paper work for importing a truck of this age.
Cheers
Craig

I quite like it, also being rare and bearing in mind with age there's bound to be repairs.

Chassis looks good and if I recall the french equivalent of the mot is very strict so as it's on the road thats a massive plus.

Body work and trim makes these what they are, the rear doors are replaceable even though the ones are diy.. that are on it.

Pretty cool truck and of course you can always replace the floors with bead rolled panels that would make it more standard..

Good luck with it if you choose to buy it..
Reactions: cmcmill01

So am I correct that from 1979 to 1980 the European vin will start with a 9 and there were only 510 of the mwb originally imported into Europe?

So a vin no without a 9 will be a later import.. interesting!

The info came from a Toyota archive site years ago but I have never been able to access it again but luckily I downloaded the files for each 40 model. I haven't tried to find it again for some considerable time, perhaps, I should when I get a spare day.

European market models were designated with '8'; '8.5' or '9' depending on the year. Discovered when searching info on a bj40 from 1981(? if memory serves) that had discs on the front axle and a few other bits that didn't appear en masse until the LXs around '84 There were, apparently, 4459 40s made to the 'European' spec.

Rear axle mounts look right but the springs look like they have a couple of extra load-assist leafs at the bottom and the bump stop rubbers appear to vanished. As @iwan_t24 says the bed floor can always be replaced. From the photos IMO it looks pretty good and certainly something that would benefit from some TLC.

Re transportation, pm when you want.

Thanks @Rodger and @iwan_t24 for the info folks,
the VIN number looks to be BJ43-000745, does that make sense?? Look to be missing digit. Have asked for a clearer picture

Oh and it definitely started its life as a soft top, any body know how to read a french car registration certificate??

Vin number makes complete sense and notionally makes the truck manufactured in Jan or 02/1975. The archive site suggested that production numbers per month per month were reasonably consistent but exact info pre Jan 1, 1979 was not available. perhaps I should try and locate the site again and see iif there has been any updates.

Yes I have followed that thread before and Economist LC76 obviously found the same info that I did. I will see what else I can find.
I think, based on some time with pre-production vehicles (various manufacturers), that most manufacturers operate pre-production and development vehicles on internal codes and not model designations although I cannot say if Toyota used that system., so the later piece in that thread concerning pre-production frames etc is IMO a red herring. Agreed a price on Friday evening last week, asked for all the details, bank, address etc, nothing for a couple of days, Monday morning let’s me know he has sold it for a higher price
Twice that’s happened now!
thanks @Rodger for looking into the transport
You must log in or register to reply here.
Share:
Facebook Reddit Pinterest Tumblr WhatsApp Email Link
Top Bottom
✖
AdBlock Detected