Still a work in progress (yes still is) but I know looking at other peoples stuff has given me ideas in the past, both what to do and what not to do Most of the time I need a decent load space in the boot for transportation of random objects, I only need a full on 'storage system' a few times a year.

I made a main frame for each side out of steel 25x25x3mm box section. Then I tacked some 25x25x1.5mm box outriggers on for additional supports. The base mounts to some of the 3rd row seat captive nuts in the floor and these provide the real strength. The top bolts to the 3rd row grab handle captive nuts and although quite strong these really are just steadying the tops of the frames. I cut some 9mm mdf to face the frames with, thick enough to take knocks but thin enough not to be too heavy and the steel frame carries the loads.

This is the drivers side with the mdf taken off: 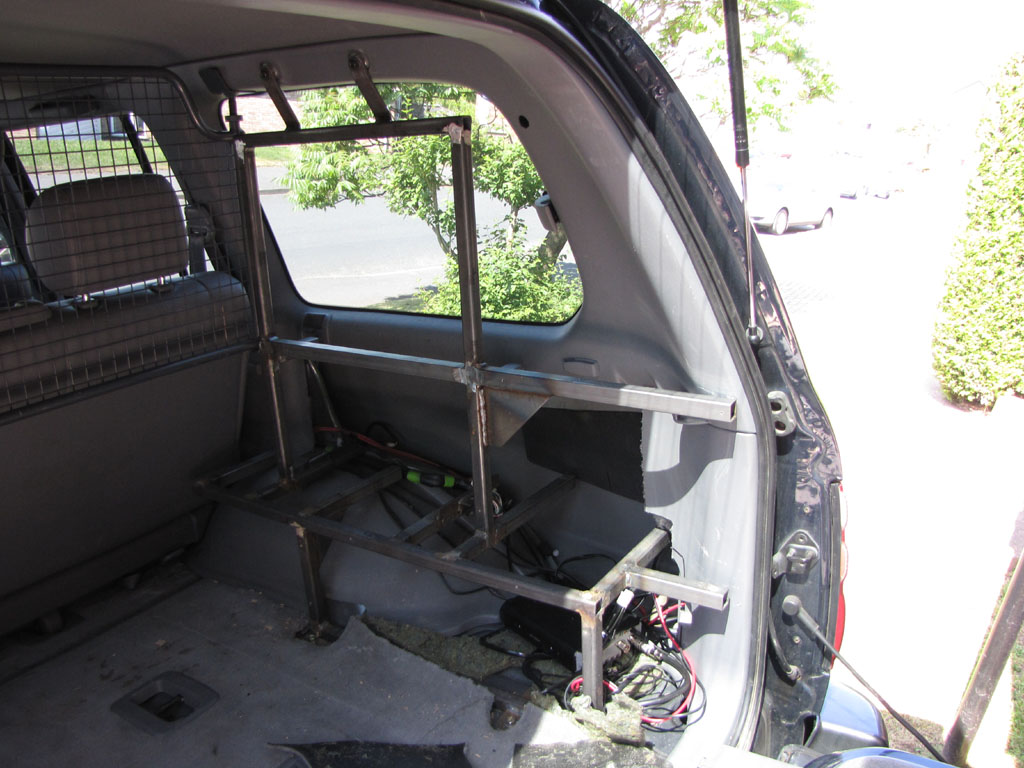 You can see I've trimmed the plastic panels to expose the wing space that is usually inaccesible and above each wheel tub there's room for a 110ah battery so I've put mounting and tie down points in for those. I've got a couple of compressors, fuse / junction panel, a big invertor and my radio gear to fill up some of the void behind the panels. I should still have space behind there for a water pump and any other 'essentials' I think of later!

Passenger side with mdf: how it looks from the outside front I've blurred out all the 1.5mm wall box section in this picture so you can see what I used 3mm wall for and what the basic frame started out as and circled where it bolts to the truck. It wasn't until the extra sections went on that the plastic side panel needed cutting. Spent time adding a couple of platforms. I started off by running some angle supports along the sides of the existing frame to support the platforms and then welded up the 25x25x1.5mm steel box section platform frames and screwed some more 9mm mdf to the top. Both frames have some nutserts in the underside and where they rest on the side supports are bolted down to stop them going flying! I also got to fit and try my platinum gear fridge drop slide My current plan is to put a pair of drawers under the lower platform and euro box's or similar on the others. I've gone with the fixed side frame and bolt in middle sections so that if this configuration isn't working out it should be quite easy to change but I needed something to be going on with and I can get on with painting the side pieces and installing aux batteries and compressors behind those panels now I'm pretty sure it's going to work out.

I've run 40mm2 cable from the engine bay battery into the boot on the passenger side where it goes to a heavy duty solenoid. The aux batteries are connected together and to the other side of the solenoid also with 40mm2 cable and to a heavy duty terminal block each side for power take off. All three battery connections are via 250amp inline mega fuse's. The solenoid coil is powered via an on-off-on toggle switch set up for constant, off, or voltage sensed (normal).

Here's the drivers side with the side cover off. My HAM radio is mounted to the inside face of the board and I've got my compressor installed as well. Above the battery is the new board with a 2KW inverter bolted to the back of it and in the top corner a power outlet for the fridge. Passenger side - lot of unclaimed space which may be filled with a DC charger. Still quite a large space below battery level on both sides that things can be stuffed into (jump leads etc). Boards back on, not a lot to see except the compressor power switch and air outlet on the drivers side and the inverter peaking out from behind its window board. I need to run a few more power sockets but that's the bulk of the electrical work sorted so I'll be getting back to the business of storage next.

Thought I'd try some drawers to see how that works out. The slides are 700mm full extension and they're detachable so e.g. the 'kitchen' drawer is easily removed and carried elsewhere if needed instead of keep running back to the car. Each drawer is 800x420mm and the sides are 18mm good quality ply with a 9mm mdf base, all screwed together no fancy joints or glue If I like em I might eventually bend up a bit of mild steel for them instead. There's still quite a big space between the drawers and back seats where I keep my tools and spare parts. The right hand drawer is my 'kitchen' so it got a coat of paint: The left hand drawer has family junk in and when off playing is where my recovery gear will live: The bit up the middle has my ground anchor with pins, sledge hammer, axe, spade, hand winch handle and a small brush for cleaning lights off.
Reactions: GrahamR

Very nice work as always Jon, and I love the fridge slide - this what they should always have been.

Very nice indeed.... out of interest why the need for the extra batteries?

Normally so the fridge can stay running which you are away and the engine is off.
In Jon's case, I think it's a little of that and a little of "just 'cause"

I wanted to be able to park up to camp for 4 or 5 days and a single aux battery can't cope with that. I also have a growing collection of radio gear that can be quite power hungry.

Where the buggery bollocks did you get that fridge slide mate?

its exactly that i need!

will post some pics of my setup later on- remarkly similar in what it contains to yours though- aux battery, air pump, hidden safe, bass speaker etc etc

you like that then do you! I got it from BOAB, but they're rather ever so slightly expensive and I was consoling myself for the loss of my old 80, I think Gary has an up to date price he might share with us?

the south african made slide i have was £225 from MPS.

how much more than that? it would really solve a bit of a problem though.
P

pugwash said:
the south african made slide i have was £225 from MPS.

how much more than that? it would really solve a bit of a problem though.
Click to expand...

I think when I look it was double that!!

I want to say £300 but now I'm not sure but maybe you won't think it's such a bad price after all. Very solid bit of kit, does the job well, has to come all the way from Australia though so that can't help with the price. Best bet is to phone BOAB and ask how much they are now.

Current price from Chris at BOAB was approx £350.00 depending on what else you buy!

APB have an African Outback version (non-drop) for £170.38. About to phone them for capacity and dimensions ...

I'm not sure which one to get as yet - APB have my roof-rack in so that'll be on it's way up and I'm tempted to just add the Big country fridge slide to the bundle ...

For the [clearly] uneducated amongst us, why are they so expensive. Are they not just a drawer slider with a bit of clever design to them?

Hi Jon
I've got a new project for you. With all that wood and electrics I recon you need to design and instal a SPRINKLER SYSTEM !
PS Congrats on who designed this 'site.

Have to make do with a fire extinguisher Frank!

Those big batteries in previous pics are no longer in the boot, since our power requirements changed I removed one battery completely and then with some changes under the bonnet was able to move the remaining aux battery to the engine bay. That free'd up some space for other things

I don't use my air compressor very often but I always wish it went a bit faster when I do so it's been on the cards to upgrade for a while. I got a small (2.5l) air tank from BOAB in a clearance sale they were having a while back with this in mind which is enough storage for letting the compressor run on between tyres and it doesn't take up much space. The tank only has 3 ports so that's 1 each for the compressors in and one out so I needed a manifold for the pressure switch, relief valve with an extra 1/8th outlet left spare in case I decide to run the air lockers off it at a later date.

The manifold with its bits fitted tonight Mostly cobbled together just some wiring to sort out and a pipe from the 2nd compressor that used to be a portable job and doesn't have a proper leader hose. The tank is just behind the ARB compressor in the picture. The compressors are what I already had but in time I'll look to replace them with a pair of higher output ones. I sorted the wiring out after that pic was taken and am just waiting for a fitting to be delivered to plumb the 2nd compressor into the tank. Remains to be seen if it will suffer for not having a check valve or not. I also have to work out how to adjust the pressure relief valve because it's blowing before the pressure switch cuts out at the moment

What about the kitchen sink Jon?

Where does your chainsaw go?

I make do with a bowl and an axe

The last fitting came so I fitted that and hooked up the 2nd compressor. Doesn't take it long to pump a tyre up with both compressors going for it! Makes me think about how fast it would be with a pair of those 160l T-Max units

My 2kw inverter lives behind that panel as well