Well, er in doors has been pestering for weeks now to change her motor.

When she bought Willow last year it was the best move ever and Willow was the best motor in the world.
However I had a few misgivings. The 90 is a fantastic motor but with only three doors and two bloody great Dobermanns I sort of knew things were going to go pear shaped. So we started to look around and what did she fall in love with??????
A Mercedes SLK.
Now, I don't know about you, but Willow started to look really good again.
I had visions of my 80 becoming the dog carrier whilst she swanned around in her soft top Merc.

So I started to dig in and suggest what were to me some more sensible motors.

During the early hours of this morning we set off to look at a few motors and after many hours and a lot of crawling under motors, she finally settled on what I believe is an awesome motor. 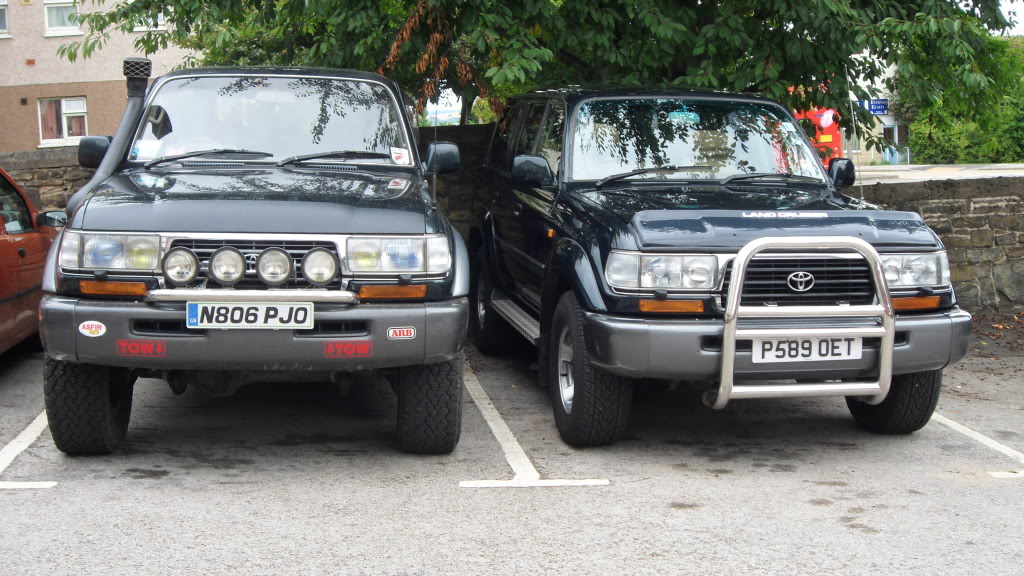 She is a 4.5 Petrol with 202000 miles on the clock and she is in fantastic condition.
The low box is really sweet and all the lockers work which really takes the michael, as our gert will never off road her or let me even drive her I bet.

Very nice! Coming to happy valley then this weekend with it?

Very nice indeed... won't that be expensive to run as a daily motor?

I have sent off for quotes for the LPG conversion.
I used to run a V8 Disco on LPG and really rate it.
Don't like the adverts? Remove them by becoming a supporting member.   Click here

Them tail lights - Do they come off a Saxo?

Them's the first thing we intend to sort out.
They were bloody hopeless following her down the M1 today.
Why the hell anyone would want to fit them, I don't know.

Christ dude that was quick!

The thought of the merc would motivate me too!

The thought of the merc would motivate me too!
Click to expand...

I just had to steer away from a soft top Merc. I was surprised that she went for the 80 though.

I can't believe how sweet it is to drive and so far everything works fine. It belonged to a gunsmith who took clients shooting in it so I suspect it has done a lot of motorway miles up to Scotland on a regular basis, even had a twelve bore cartridge in it. He bought it as an ex demo so it has only been owned by him and Toyota.

Nice find, looks a great truck
The other thing that strikes me is how similar it is to an SLK

Julian said:
Nice find, looks a great truck
The other thing that strikes me is how similar it is to an SLK

PMSL. . . . Yes the similarities are staggering.

Just been reading through the paperwork that came with it. Every reciept including the first bill of sale where he chopped in a three year old 4.2 diesel 80 on an L plate for his new £37,000 motor. A full service history from day one to 176,000 miles all at a Toyota dealership in Doncaster. That means only 26000 miles not serviced over three years.

Sorry mate, it will be going on e-slay as soon as the 80 is gas converted.
Got to be honest, Willows headlamps are pants and if we were keeping it I would have changed them for the later square ones.

Les, you must remember not to take it to Slindon, the doors look to straight

On a different matter, is it just the pictures or does your's have a bit of a list to port?

Julian said:
Les, you must remember not to take it to Slindon, the doors look to straight

On a different matter, is it just the pictures or does your's have a bit of a list to port?
Click to expand...

She has already green laned it today

but no you are right. Slindon and doors don't mix to well

On very rare occasions it even sits straight.

I thought that when i saw the picture but assumed it was just the surface it was sitting on?

nice one mate. thanks for the tip!

Julian said:
Nice find, looks a great truck
The other thing that strikes me is how similar it is to an SLK