Leaking Brake Fluid -- What is This Part?

Yeah. I'd have considered it a total rip-off if that piston core had been boring plain metal. But, that nice red colour more than justifies the expense.

OK, I see where everything is now - my memory was failing me (its a few years since I worked on the 90's LSV) and I thought the Panhard Rod was lower, with the spring facing down. I should go and dig the 90 out of the weeds where its been rusting for three years and have a look underneath.

Interesting insides to the LSV, I think I see how it works, though I can't see exactly where the input fluid enters the chamber. I guess its in the shadow towards the top of the picture.

I never understood why the '90' needed an LSV AND ABS !

Hopefully that is one more problem ticked off your list

My 90 has no ABS, but it does have an LSV. The LSV is perhaps a hangover from the days before ABS was added.

Had this issue on the 80 with no ABS a few years back. Wasn’t straight forward to get to it, but once out of the vehicle I got some seal / seals can’t remember and replaced them.

Pretty simply job tbh just a real pain in the Ass to get it out and back on with the bolts being awkward to work with. Never had a issue since and was a simply repair.

Thankfully I have no rust to deal with being a Japan import and in a sunny climate.

At the time I asked my cousin / mechanic shop what does it do and was told it helps the rear brakes work in sync with the front and as it was shared earlier about load weight compensation does ring true to what I was told.

Happy to see you making progress to get the cruise back on the road.
Last edited: Aug 22, 2021

Michael Montgomery said:
Pretty simply job tbh just a real pain in the Ass to get it out and back on with the bolts being awkward to work with...
Click to expand...

Yep. These are the kind of jobs that infuriate me. The actual "unbolt this old thing and bolt on this new thing" process would take about 15 minutes if you had the 'thing' in question on a bench in front of you. But ends up taking several days [and several years off your life] because everything is crusted to feck and seems deliberately arranged to be as inaccessible as possible.


BobMurphy said:
Interesting insides to the LSV, I think I see how it works, though I can't see exactly where the input fluid enters the chamber. I guess its in the shadow towards the top of the picture.
Click to expand...

It does. But it's hard to see. I took a couple more snaps today:

The input port and bleed nipple are one straight run through. bit hard to see in the shadows, so I stuck a piece of wire through 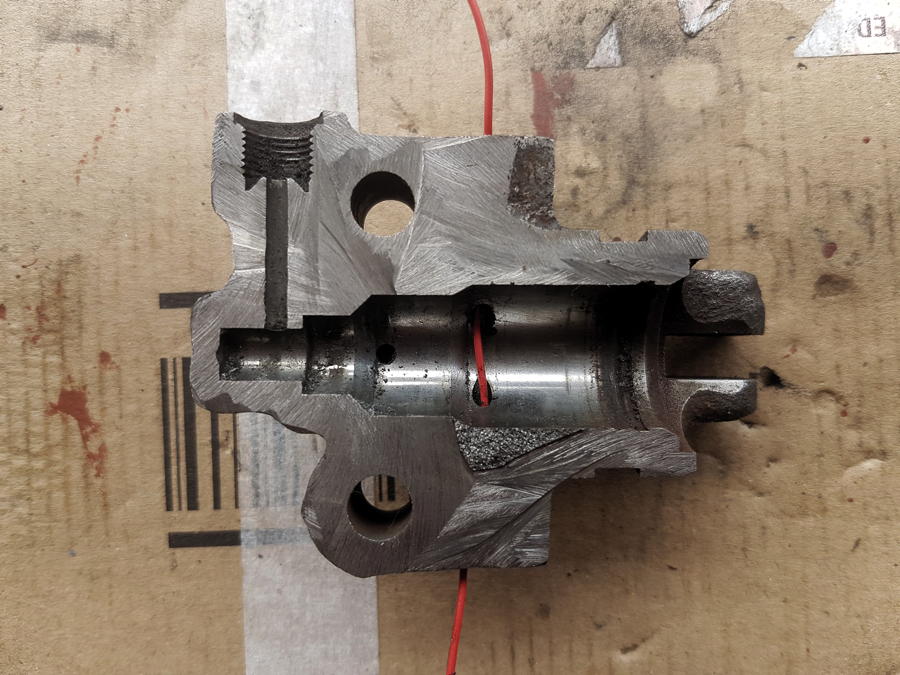 The black surround of the piston is actually in two pieces [three if you count the wee plastic ring which fell out and allowed me to move the two halves this far apart]. The outer [right on photo] section is metal and fixed to the central red metal core. The inner [left on photo] section is plastic and freely rotates round the core 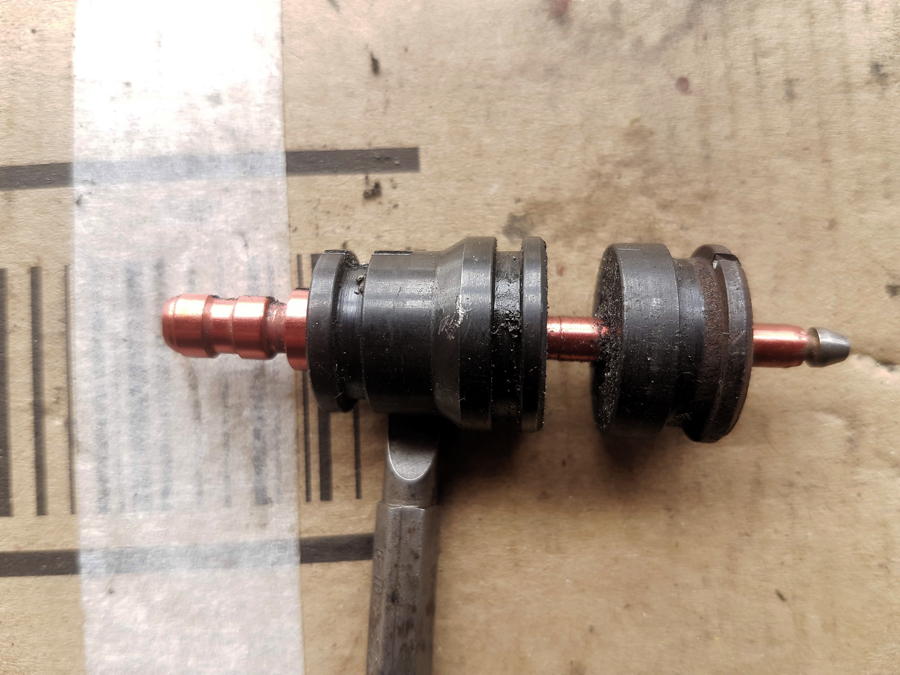 I was surprised how little space there seemed to be around the piston to allow fluid past it to the rear brake pipe port. However, the metal on the inner end of the core is bevelled in this one spot [the rest is round in profile]. So I'm presuming that has something to do with allowing brake fluid through. The gash in the black plastic is 'stuzbot angle-grinder' not OEM! BobMurphy said:
I never understood why the '90' needed an LSV AND ABS !
Click to expand...

diggerdave said:
My 90 has no ABS, but it does have an LSV. The LSV is perhaps a hangover from the days before ABS was added.
Click to expand...

They serve different purposes. The LSV alters the distribution of hydraulic pressure between front and rear brakes, depending on how much weight is over the rear axle. I'm presuming more common in vans than 'normal' cars, as I've had them on all the vans I've owned before, none of which has had ABS. ABS does what it says on the tin. Stops you skidding if you brake too hard and lock a wheel up.


BobMurphy said:
I should go and dig the 90 out of the weeds where its been rusting for three years and have a look underneath...
Click to expand...

Does this suggest you have an abandoned 90, rotting away in a corner of your garden? If so, I know someone might be interested in some parts off you. [nudge! nudge! wink! wink!]


BobMurphy said:
Hopefully that is one more problem ticked off your list

That bugger wasn't even on the list in the first place. Trust me to cop for the 'Buy 2 Problems, Get 1 Extra Free' special offer!

Returning to our scheduled entertainment; It'll be either a new cambelt or coolant and tranny flush --depending on how the mood takes me. At least, from what I've seen on the intarwebs, the cambelt change looks to be one of the easiest around [I just hope I haven't tempted fate by saying that!]. I still wake up screaming some nights, remembering the ordeal of changing the timing belt on the old VW LT series. Suffice to say, you end up with more parts taken off the van to get at the damned thing than are left attached.

Of course, now I've crawled under the back end for the past couple of weeks, I'm itching to get wire brushing, sanding, rust-proofing and painting that rear axle and chassis area. To preserve it in its current condition while I ponder on patching that piece of rot and any others I find. As well as deciding whether or not this LC is worth keeping. Amazing how so many of these 90s are almost mint at the front and rot boxes at the back. It's like the world's most misguided cut'n'shut operation.
Last edited: Aug 22, 2021

Wow so many parts, you seriously have the skills to build a car from scratch. I just started wish to reach your level one day
Don't like the adverts?  Click here to remove them

Thanks for the compliment [albeit sadly misplaced]. All I did was fit a new part and cut the old one in half with an angle-grinder, to see what was inside it.

stuzbot said:
Does this suggest you have an abandoned 90, rotting away in a corner of your garden? If so, I know someone might be interested in some parts off you. [nudge! nudge! wink! wink!]
Click to expand...

Well, it probably feels abandoned - but it isn't. It was running well - then the sills rotted which meant an MOT failure so I bought the N/S floor/sill panel and drilled-out all the spot welds. The old rotten panel is loose, but I need to lift the body to get it out . . . .

Then a daughter's car suffered a catastrophic MOT failure (Toyota quoted £4,000(ish) to fix it) so my attention turned to that.

Then the other daughter's car needed fixing,

Then the sills went on the 'Amazon' leaving me without a tow truck so that became the priority.

Then I had to dig up the kitchen floor to lay a new water pipe.

and so it goes on.

I'm still working on the Amazon which is rotting faster than I can fix it but one day the '90' will arise phoenix-like (unless 'The Sturge' and her new 'Green' Alliance put a stop to ownership of big gas-guzzling 4x4s in Scotland ).

Has anyone introduced you to Simon Holton - Parts Manager at Steven Eagell Toyota ??

Simon gives a (small) discount to club members, but more importantly he is super-helpful and dependable for parts.


If you need bits - give him a call

BobMurphy said:
Well, it probably feels abandoned - but it isn't...
Click to expand...

No worries. I haven't got an urgent need for any parts yet.... unless someone has a spare galvanised chassis lying around!

Just keeping my eye out for a few wee cosmetic bits here and there; broken switches, cracked centre console etc [and of course the front grille & headlamp mountings] that I'd like to sort out eventually, if someone had a Collie they were breaking.

Stuzbot you need to get in touch with @tonytoyota on here. I believe he is breaking a Collie with most parts still available. He's just sold the seats out of it in the classifieds.
You must log in or register to reply here.