Leaking Brake Fluid -- What is This Part?

Gave the missus her first driving lesson in the Land Cruiser this morning. Nervous learner that she is, she tends to jump on the brake pedal the instant something hoves into view on the distant horizon.

Anyway, after she'd finished her half hour's shattering my nerves and I got back behind the wheel to take over, I noticed the handbrake warning light wasn't going out. Didn't really think much of it. I presumed a plug had come undone somewhere. But driving home from where we'd gone, I noticed the brakes felt a bit softer than usual and, when we arrived home, I noticed a couple of drips on the ground near the rear wheel, which turned out to be brake fluid.

Stuck my head underneath and saw this... 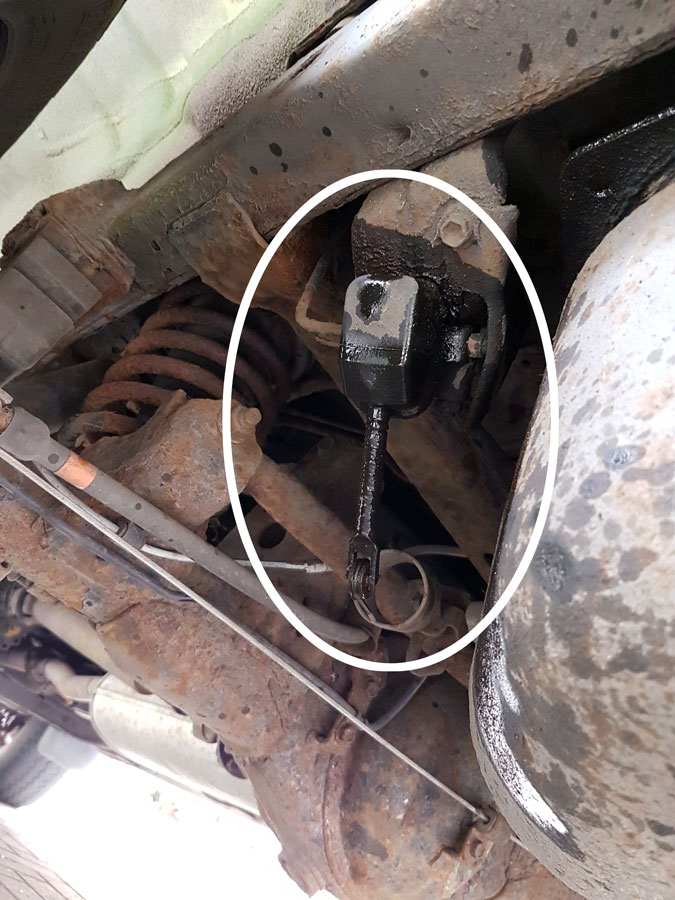 So, what the hell is that component? And where is the leak likely to be coming from? When I stuck my head under, it looked like it was coming from this actual mystery component itself. But, looking at the photo, it might be dripping down onto that from somewhere above.

UPDATE: I've found this in one of my PDF manuals, which looks a likely candidate. But I'm still confused as to whether it's likely to be leaking brake fluid. On my old VW van I had a 'Load Sensing Valve' on the rear axle which sent more hydraulic pressure to the back brakes when the van was fully laden but, unless I'm mis-remembering, that was just a lever on a spring which did 'something' to divvy up the brake effort, but wasn't actually plumbed in and filled with brake fluid itself.

Assuming, this is the Toyota equivalent, does it serve a similar purpose? And, [hopefully] is a repair kit is available.? Threw the grubby overalls on and went for a crawl underneath to get a better look at this. The brake lines going into it look pretty crusty, but the leakage seems to be coming from the actual body of the valve [?] itself. When I pulled the rubber boot back, I could see wetness around the edges. 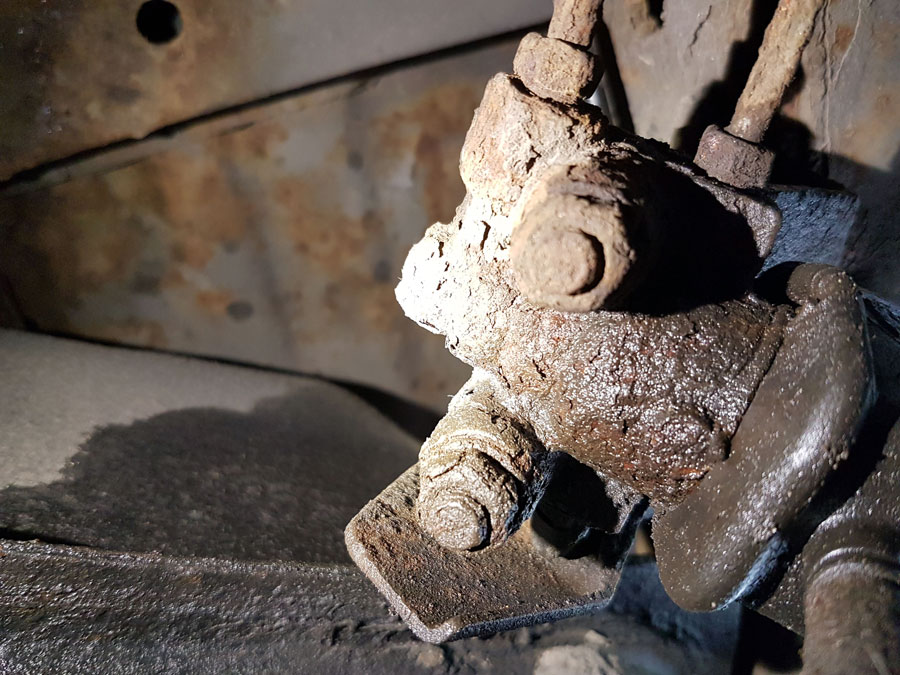 BRAKE LOAD SENSING VALVE FOR TOYOTA LAND CRUISER PRADO / COLORADO 3.0TD (1996+) | eBay - [Leaving Land Cruiser Club] Chuck one of these on it... Plus, you will probably knacker the brake pipes getting the old one off..... (i did)..So i got my self a brake pipe flaring kit as well..... Crack on

Higgy said:
BRAKE LOAD SENSING VALVE FOR TOYOTA LAND CRUISER PRADO / COLORADO 3.0TD (1996+) | eBay - [Leaving Land Cruiser Club] Chuck one of these on it... Plus, you will probably knacker the brake pipes getting the old one off..... (i did)..So i got my self a brake pipe flaring kit as well..... Crack on

Oh yes. I'm banking on those old pipes to disintegrate as soon as I look at them. They were so crusty, I was shocked to find they weren't where the leak was coming from.

Hmmm... dunno if I'd buy something as important as a brake component from Milner's. Their stuff has a bit of a reputation for being pretty cheap'n'nasty.

Mind you, back in the prehistoric times when I had my old Series Land rovers, Milner's was the goto place for parts. But then I suppose matching the build quality of components coming out of Solihull on a wet Friday afternoon is slightly less of a challenge than meeting Toyota standards.
Don't like the adverts?  Click here to remove them

Anyone know off-hand the diameter of the brake pipes? Might as well get a roll of that and a flaring/bending tool in, while I'm at it. I can't see what's on there at the minute lasting much longer.

Copper Brake Pipe 25ft 3/16" with 10mm fittings - male female nuts unions x 20 | eBay - [Leaving Land Cruiser Club] Something like this would do'ya' but check first... this is just a guide.... There are more expensive options out there if you prefer ....

Get Kunifer instred of copper, its stronger and doesn't go green.

stuzbot said:
Hmmm... dunno if I'd buy something as important as a brake component from Milner's.
Click to expand...

I bought genuine, but from memory they were about £80 then. They are not very complex things. If you can spare the time, soak the mounting nuts with easing oil for a good while and give them a bit of heat. Andys advice on using Kunifer is well worth taking, it's a little bit harder to work with, but a lot more durable and vibration resistant.

Just looking at this reminds me of the one I took off JW's old 80 last year. Looking at that if I remember getting the similar nuts off wasn't a problem with copious amount of heat and 12mm or I think 11mm Irwins but the problem comes trying to get the body from the two studs which pass through it. You may be better off taking the mounting plate off the chassis with the valve attached and tackling it on the bench. The studs are part of the mounting plate so a bit of ingenuity may be required otherwise a new mounting plate will be added to the shopping list. There are I think 3 or 4 bolts holding the mounting plate to the chassis and I'd recommend heating them all before attempting to remove looking at the state of the chassis, snapping them off will introduce you to a whole new world of pain.

Totally removed my LSR and plumbed in a T section less to go wrong and replace so got full braking all the time had no problems whether running empty or fully freighted with 3.5 tonne tipper trailer

I think I've got a roll of brake pipe buried in the bottom of my "Things That Might Come in Handy" cupboard under the stairs. It's not copper though, coz it's greyish in colour. Never heard of Kunifer before.


SteveJB said:
Totally removed my LSR and plumbed in a T section less to go wrong and replace so got full braking all the time had no problems whether running empty or fully freighted with 3.5 tonne tipper trailer
Click to expand...

Now this sounds interesting. I've just 10 mins ago ordered the part from Milner's [Yeah. I cheaped out in the end!] But I did actually wonder about bypassing the valve completely. I'm not going to be loading up the back of the waggon [apart from with me and the missus and our camping gear. And I'm not going to be towing a caravan or anything. So I wonder if it would make much difference? Apparently a lot of them seize anyway. So lots of folks are probably driving round without one, without knowing it, or noticing any difference.

Would this be something they'd be likely to pick up on at the MOT though?

Hmmm.... seriously considering cancelling my Milner's order now and doing this instead. I'm always in favour of removing complexity where it doesn't have any untoward effects.

UPDATE: I've emailed Milner's to ask them to cancel the order [needless to say, no way to cancel on-site]. Coz I think I'm going to go @SteveJB's route and just delete the valve completely. For less than the price of a replacement valve, I could probably delete it and replace all the crusty old brake lines, into the bargain. Seems like a no-brainer.

PS: Would the leaking [and presumably loss of brake fluid pressure in the valve] have caused my handbrake warning light to stay on? I'd have thought there'd be a separate warning light for brakes and handbrake. So maybe something else has come adrift too.
Last edited: Aug 1, 2021

Check your brakefluid level, probably low and that’s why your light is on

I cracked up at your description of your wife..

gettin’ behind the wheel ! I can identify totally ! It must come naturally that the minute they climb into something that moves...they’re concerned with stopping ? Hilarious ”..sees something on the distant horizon.”
Last edited by a moderator: Aug 1, 2021

Is all [or most] brake pipe a standard diameter. I dug out the roll I mentioned before that I had in the cupboard under the stairs and measured it at 4,78mm diameter. All the brake line for sale on Amazon seems to be 3/16" which my calculator reckons is 4,76mm. So I'm assuming those are the same.

However I've just been out and measured the lines going into my load sensing valve and, for a start, in the parts which aren't corroded to feck, they're plastic[?] coated and weigh in at 6,9mm. The uncoated crusty parts going into the valve I've measured at 5,7mm. Even allowing for the layer of corrosion and crud on top, that seems quite a difference. So I just want to check that Toyota aren't using some non-standard diameter, before I order a T-junction and flaring tool and embark on 'Operation LSV Bypass'.

Higgy said:
The flaring kit i bought had 20ft of pipe, male and female fittings pipe bendy thing and the type of pipe cutter Plumbers use..... Easy to use.. If i can do it, I think a Chimp can do it...
Click to expand...

I've been trying to decide between those all-in-one kits. Of which Amazon has the usual dozen brands at a range of prices, but which all look absolutely identical... ..or buy this kind of flaring tool separate... 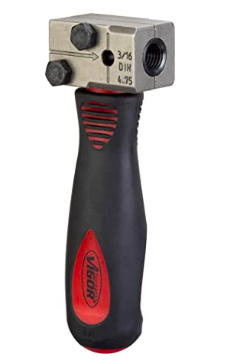 Lots of the reviewers on Amazon seem to find the first kind a bit hit & miss when working with kunifer pipe and the 2nd kind gets pretty much universal thumbs up. Of course, it's a bit dearer and only a one trick pony. I'd have to buy a separate bender. But it might be worth an extra £20 or so if it makes the job easier. Few thing in life so frustrating as struggling to finish a job, without the right tools.


Higgy said:
Personally i would fit a new LSV, Instead of sticking a T piece in...
Click to expand...

I might do eventually. But I've spent a shed load on preventative maintenance' parts for this motor already and I've still to budget for a new set of tyres. So, if I can postpone shelling out on anything that isn't absolutely essential for a few more months more at least, it'll help. It's not as if deleting the valve would make any difference to the braking as it would only activate when there was a load of extra weight over the back axle anyway, which won't be happening with my usage of the truck.

I'm not the biggest fan of LSVs anyway. I've had a couple of the old VW LT35s in the past. They had an LSV and braking force was normally split 60/40 front/rear. And, since they only had drum brakes on the back, that effectively meant the back brakes might as well have only been there to give the wheels something to bolt onto.

I used to have a hell of a time getting those buggers through the MOT every year, the back brakes had so little stopping power. Some of the guys on the VW forums used to put bags of cement in the back at MOT time, just so the LSV would be activated and the back brakes would get their fair share of the braking force.
You must log in or register to reply here.