In last week I went over the headache of rear diff lock not working.
I could hear the actuator when switching diff lock ON and OFF but the red light was blinking (not solid)
I've searched for the new diff lock actuator - and it would cost me with new EU import taxes & shipping around 400-450€

So I jacked up the back of the LC and did some tests with low range engaged - one wheel was spinning forward and the other backward (with front wheels on the ground).
This is clear sign of rear diff not being locked and central diff being locked.

Firstly I tried to wake it up with some precisely aimed hammering - with no results. Decided to take a look on the pin that is located from the right side on the differential - tried to hammer that one in while rear diff lock in "ENGAGED" position and spinning the wheels slowly.
This provided no results - I could not move the pin a milimeter. Right, off it comes.
I've tried to check it while still connected to the car's ECU , but removed from the diff - and it did not spin the gear wheel. Again, I could hear the actuator working - but the gear would simply not spin.
I've taken some pliers and tried to spin it manually - And - at a mediate strenght it actually broke loose and started to spin. I hooked it up back to the cars ECU - and voila - it rotated like it should!
I guess it wasn't used by previous owner very much - and it got coroded and "fried" itself.
Sprayed some silicon oil on it - rotated it with the pliers few times -and it became pretty easy.

I read these often come off in pieces - however mine decided to give me a subset of that.
Obviously the hole might be a source of the problem - water,dust getting in ... etc (also - I might have broken it while trying to get it off the diff). The hole was obviously a problem - so I had to open it. I've decided to open only the gear part - which is an alloy - the actuator housing is steel and was coroded pretty badly.
As you can see - I've broken both bolts that hold the casing together - drilling out that took better part of an evening.
What I figured - the seal around the casing had to break at some point - which introduced watter into the system and also corroded and weakened the alloy from the inside.
The replacement rubber seal I used was I think 72 or 74 mm/2,5mm Cleaned out everything - gave it a new vaseline (white/yellow - water resistant!) and I also used liquid alloy to fill up the hole: Also I replaced the bolts - got another new rubber seal for the part behind the gear wheel (Not sure of the round dimensions - it was 2,5mm thick) 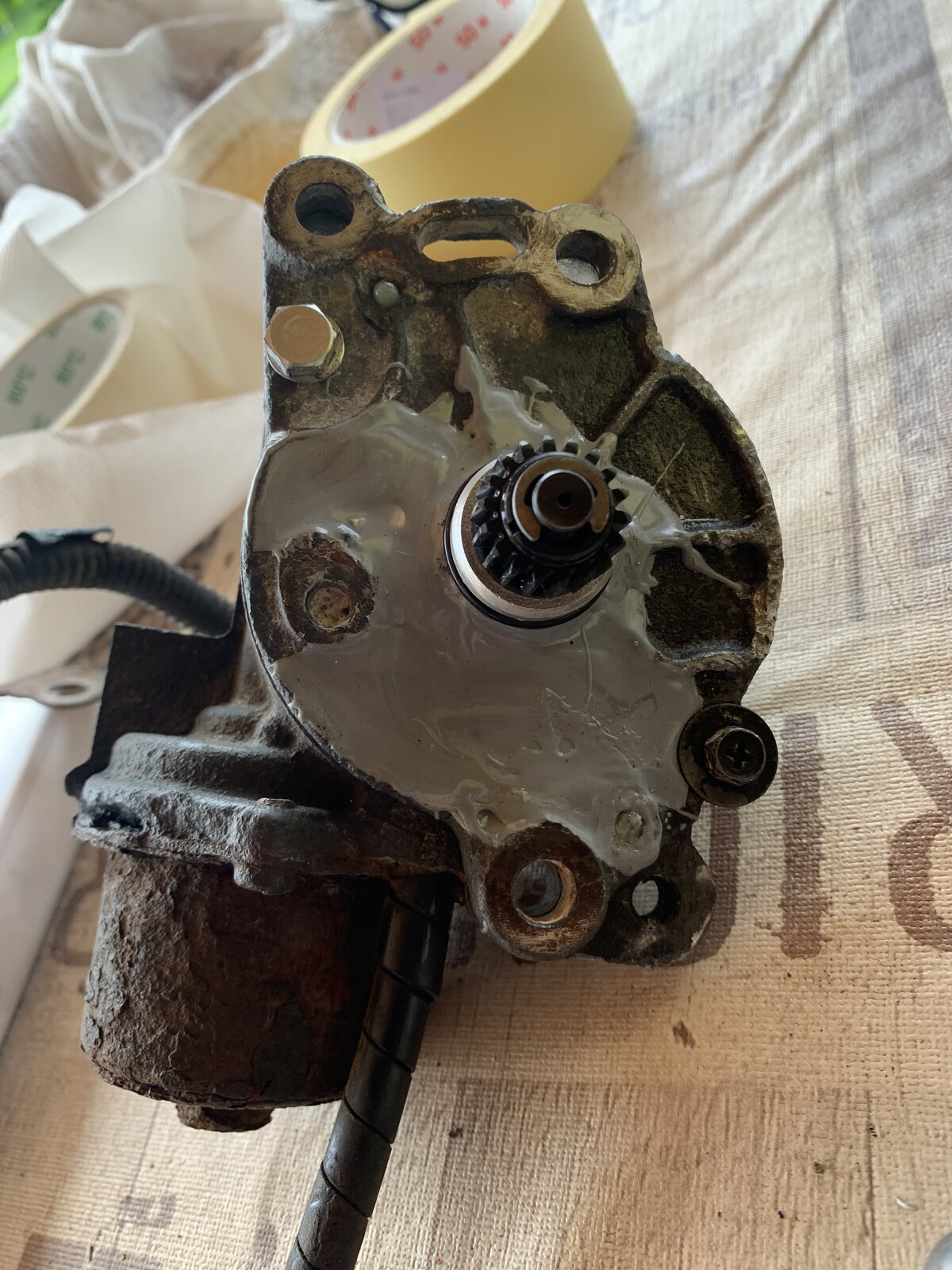 I've cleaned and painted the rusty steel actuator housing with black matte rust-eating paint (2 coats) and fit it back to the car: Replaced bolts and everything - already had it on - and screwed - decided to test it one more time - and - IT DID NOT WORK.
I thought about getting drunk immediately - however I know it worked when it was not tightl screwed on - but it was rather just put in place and tested.
So I decided to tighten the bolts half a turn at a time - one by one - while friend of mine engaging the diff from the cabin and testing the wheel spin.
I've arrived to a point where bottom screws were tight and the top nut was not very tight - the next half of turn would render it inable to engage again.
So there had to be some tension put on the housing and on the gear wheel housing - so I've decided to insert 1.5mm pad between the differential and the actuator housing in the bottom 2 bolts.
This actually fixed the problem for me - screwed it in tight and it kept working.

Hello can anyone point me in the direction of finding this fault, not long had the motor and rear diff locker didn't work, after investigating the rear actuator was totally corroded so bit the bullet and purchased a new one, after fitting said new actuator ( was in locked position and engaged...

Diff lock refuses to disengage, was working fine before this. Have tried jacking one wheel up and shaking with no luck, have tried tapping the actuator and turning circles on a loose surface and using the brakes and accelerating hard. Has anyone any ideas? Thanks in advance, Séamus.


OEM codes for the actuator:

Have a nice day!
Jan

First post , rebuilds a rear diff lock on a 90 proper write up , lots of sharp photos = we are not worthy ! Nice one Jano , welcome to the club .

Jano said:
I thought about getting drunk immediately
Click to expand...

Much appreciated - decided to give back to comunity as I wouldn't have done it without the resources mentioned, so credit goes there.
Tested it in the woods this evening - on the soaked soil it proved it's a wonderfull machine

Nice one! Mine did not come out as easily. But replacing it was one of the best things I've done to the LC
You must log in or register to reply here.

J
Rear differential lock or LSD. When does it work?