My truck is a 2001 Petrol so has ATRAC and a completely open rear diff, no e-locker, no LSD. An LSD equipped truck will be the same but an e-locker truck will have some extra wires to disconnect and make sure the locker is engaged before you disconnect everything or it won't come out of the casing.

I'm working outside on quite a sloping drive so I engage the centre diff lock and chock the front wheels just to be sure. First job is to get it up on axle stands with the wheels off: Then the hand brake cable needs disconnecting at the back of each hub: Much easier if you slacken off this adjuster first: Then disconnect the brake pipes each side and then remove the caliper. Removing the caliper isn't strictly needed but it will make the hub / shaft easier to handle when you pull it out and it's only two extra bolts and a clip. I taped up the ends of the pipes to keep dirt out: 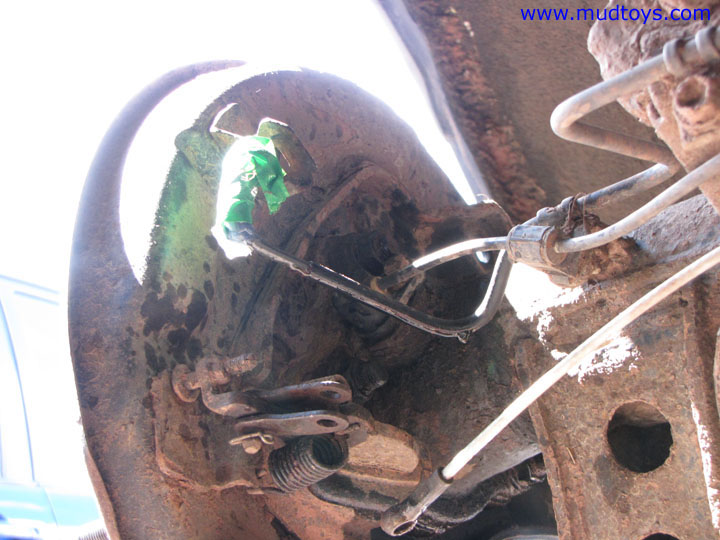 I also removed the drums for the same reason as the calipers: 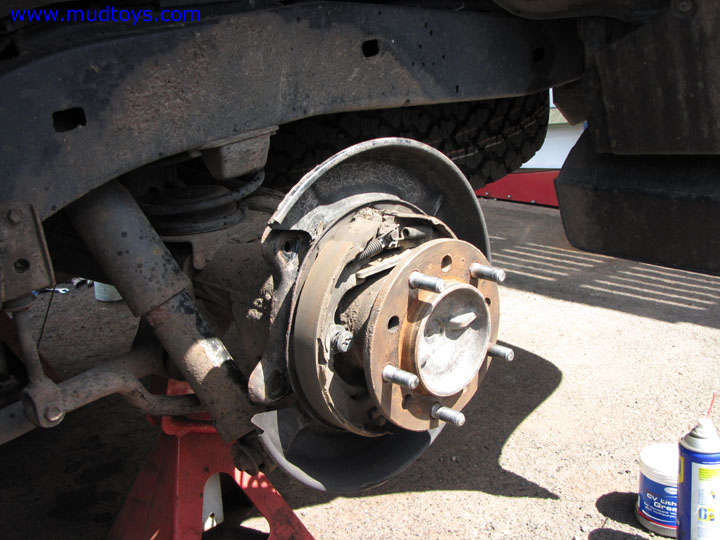 At this point I cracked each of the nuts that holds the hub onto the axle casing to check if they would give me any trouble, which they didn't, and then moved on to draining the diff. The drain plug had a bit of a surprise for me - lots of swarf along with the usual paste. The swarf is not good news and at this point I'm wondering if there is some rear R&P damage: Once the diff is drained I finished undoing the hub nuts and a gentle tap each side freed the hubs enough to be pulled out of the axle. Those are some super chunky shafts to cope with the extra power the 100 has compared to an 80: 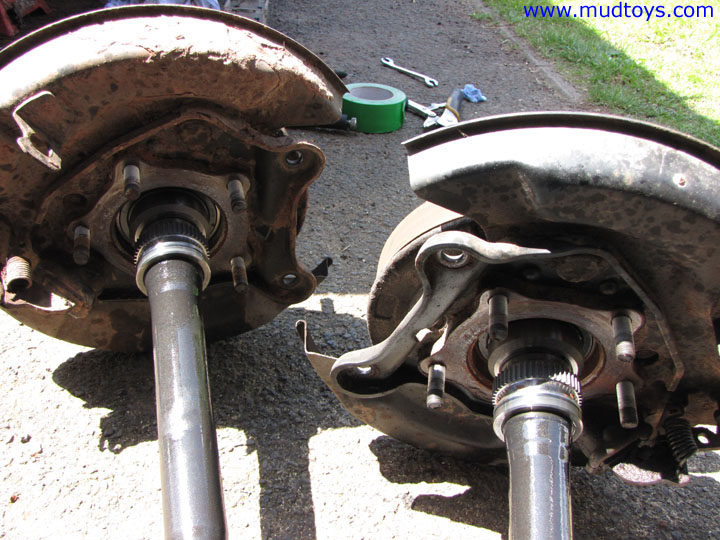 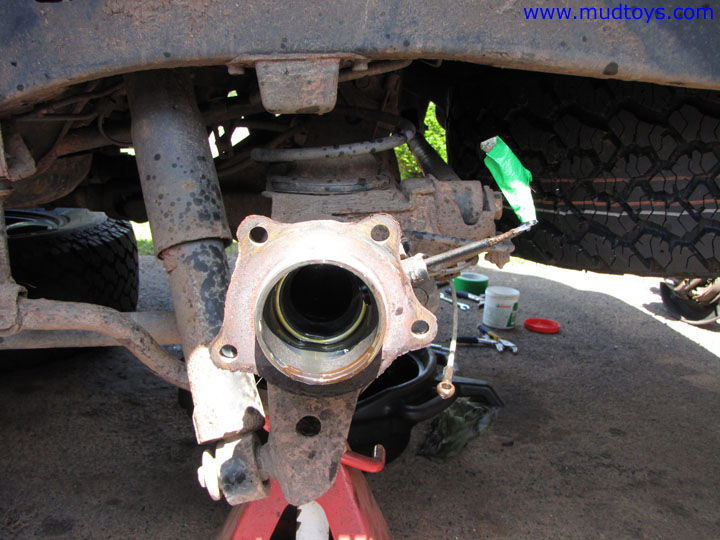 One of the o-rings had some crusty rust stuck to it but otherwise they were both in good condition. I'd attempted to buy some new ones from my local dealer in preperation for this job only to be told they have been discontinued because of the failures. Given the end of the casing never sees any oil if the seal does its job I'm wondering if the initial problem isn't actually caused by condensation. Whatever the cause I will RTV the o-ring recess when I put it back together.

Next it's undo the 4 bolts holding the rear prop shaft onto the diff flange and zip tie the prop shaft out of the way - no need to remove the transfer box end for this job. Then undo all the nuts around the diff casing. Some of them will come off as the nut and some will bring the stud out instead, it doesn't really matter. When the last nut is coming off make sure the diff doesn't fall out onto you! Sometimes they're stuck in place by the gasket and need a tap to free them and sometimes they're ready to fall out as mine was. It's quite a heavy lump so be prepared ... Here it is finaly on the bench: 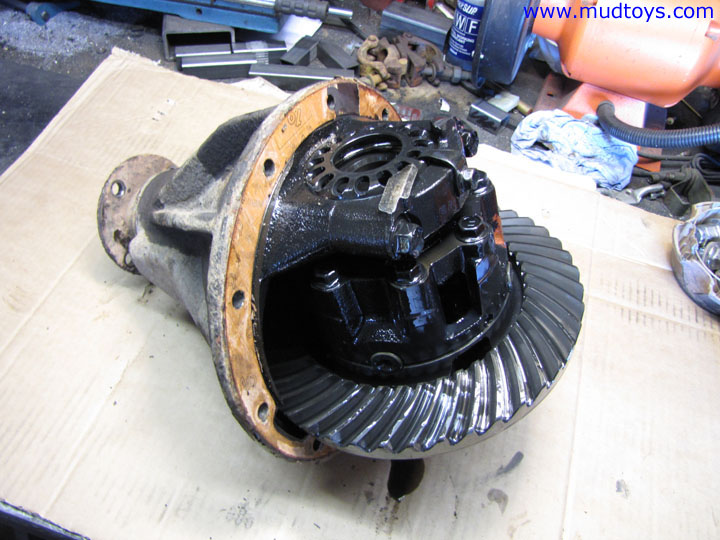 Initial inspection of the R&P says the swarf didn't come from there which is good. As I take it apart I'll keep an eye open for the source but as I'm replacing the carrier with an ARB unit and have new carrier bearings only the pinion bearings will be of real concern here.

I zip tied rags over the ends of the axle casing to keep rubbish out till it all goes back together. For reference it took about 2 1/2 hours from going out to the garage to having all the tools away again so it's a pretty easy job.

Put it all back together and had a proper look at the axle casing ends and hub mating surface while I was doing it. The main area where rust has formed on both sides is circled in green: I think the problem is rust starting at the outer edge and because the studs are so widely spaced for that area the rust is able to push the surfaces apart which causes more rust ... If it goes on long enough then rust will build up round the o-ring and push that away letting water into the hub area and getting to work on the exposed retaining and ABS ring. It's probably going to be good PM for any 100 over a few years old to pop the rear hubs off and seal them up properly: I had a lot of trouble getting the hubs to seperate from the axle casing the next time I needed to work on them. When they eventually broke free I think the problem was the big fat bead of RTV you can see in the pictures above that was to replace the (discontinued) OEM o-ring. It had squeezed along the axle tube so it was well glued on and causing quite a lot of friction. The seal around the flange broke easily enough though.

This time I've re-instated the original OEM o-rings and run a very thin bead of RTV around the middle of the flange. Next time I have it apart I'll update this thread again with the outcome.

Anyone using axle stands on a slope. Please make sure the stands are vertical.If they are leaning slightly the top can go over centre. Then everything starts going downhill at an alarming rate. Not a go at you Jon. Your pics are not quite clear enough [but I'm a bit suspicious]

Also on tarmac spread the load. I have plenty of holes in my drive where potential disasters nearly crept up on me.
Frank

I don't have much choice other than to work on a steep slope Frank as you know but I'm always very cautious about getting underneath if a wheel or wheels are off and make sure it is stable and have secondary supports, usually any wheels that have been removed, placed to prevent getting completely crushed if it goes wrong. No such thing as being too careful where getting under the truck supported on a jack or stands is concerned.

Chris said:
And I believe that you also have a handy post in the front garden that you been known to lash the odd truck to Jon

Yes, it can be a tricky drive to work on when there's no hand brake and no gearbox to hold the truck in place

I once had my Range Rover on the jack and put one arm under with the axle stand to support the chassis. At that point it slipped off the jack and the axle stand went straight through the bottom of the petrol tank which was half full. Petrol everywhere.

I was thinking some sort of shims on sloping ground to make the stands vertical. I always use the trolley jack just turned up enough to touch the part I am under. Then I can swing and heave without inhibition. Not possible on sloping ground I guess.

Anything not firmly secured on our drive slides or roles to the bottom! Even just put a ratchet handle or spanner down and off it slides

I have the car well chocked, CDL engaged and in P (if the gearbox isn't being removed!) so even though the stands are perpendicular to the drive rather than vertical they're quite stable.
You must log in or register to reply here.

C
Can this under carriage be restored?