Kindly anybody who can guide me on the right tyre sizes for my GX Cruiser HZJ105 2002 model. This machine is the best I can say. I am planning to cruise to Addis Ababa Ethiopia from Kenya and 80% of the road is rough and wild, currently I am using 265/70/16 but it looks low.

I believe 285/75/16 is the most common choice of size that doesn't require anything else modifying.

I put the 285's on my HZJ80 and it had a noticeable effect on hills and when loaded, not sure if yours has been tweaked or turbo'd from standard. I also found it quite difficult to find that size when I was in Sudan so might be best to use whatever the most common size in the area is and stick with standard as there are loads of 105's in that region.

My FZJ105 currently has 285/75/16 BFG KM2 tyres fitted, these are oversize from standard, but the engine can cope no problem. As Paul has said, this may not be the same with a HZJ. 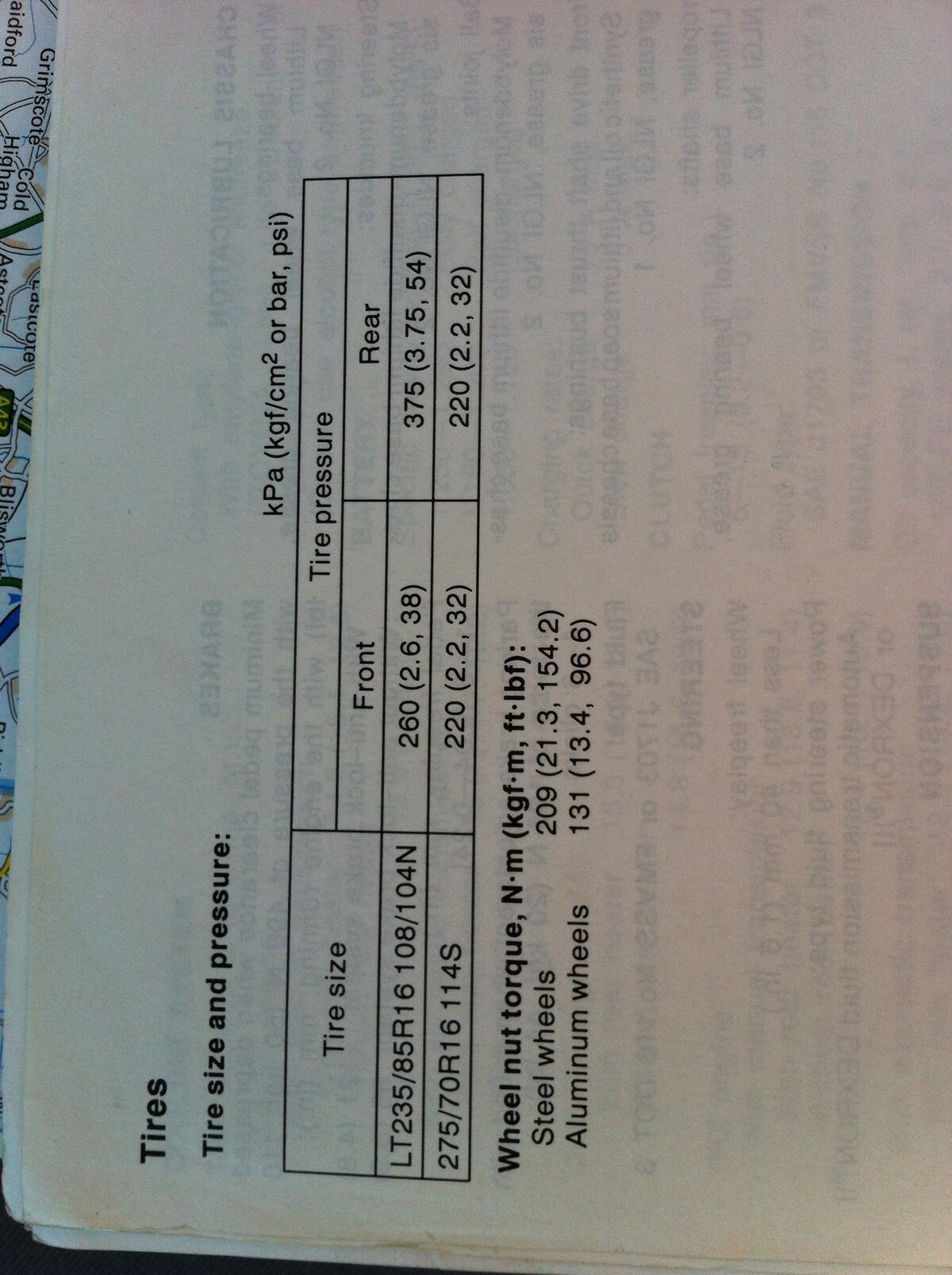 I have seen 105s with different wheels which have different rim widths in some markets, the rim width has a bearing on what width of tyre can be fitted. My 105 has 8" wide rims. What width are your rims?
Don't like the adverts? Remove them by becoming a supporting member.   Click here

I know your 105 came from Aus, does that mean the owners manual is upside down in the UK?

Yes. I imported an Australian at the same time, so he interprets for me. He even helped me hand wash the 105 before the Adventure Overland show!

My 105 has 275/70/16 fitted as standard .
Due for new boots soon and will be going up to 285/75/16 probably hankook dyna pro mud terrains because according to reviews they are super quiet

iow_bob said:
My 105 has 275/70/16 fitted as standard .
Due for new boots soon and will be going up to 285/75/16 probably hankook dyna pro mud terrains because according to reviews they are super quiet
Click to expand...

The 80 I had came with those tyres fitted and the 1st rock they rubbed against went though the sidewall, so I took them of and put Coopers on it

Yes, you should really look at what spares are available in the area. 7.5R16, or 235/85R16, could be candidates. If you actually need the higher wheels, and can live with the slightly higher CG and gearing, the 255/85R16 would be the best oversize for rough roads, or lack of such.
D

Paul said:
I put the 285's on my HZJ80 and it had a noticeable effect on hills and when loaded, not sure if yours has been tweaked or turbo'd from standard. I also found it quite difficult to find that size when I was in Sudan so might be best to use whatever the most common size in the area is and stick with standard as there are loads of 105's in that region.
Click to expand...

I would second that......my 24v 1HDFT 80 series can cope with the 275/75/16 BFG AT2's and they are brilliant but.....it has affected the gearing to the degree that first can be too high with a trailer on twisty tight corners on hill's . I've fitted the CDL switch and now can use low on the tarmac without the centre diff locking so it still works for me but I reckon a fully loaded manual spec HZJ could well struggle .

Going up in size does affect the performance of the 1HZ, well that's my experience with my 80.

It's not the end of the world, mostly a reduced top speed. So on your tour, you won't be able to cruise at 130 kph on the corregations

I'd go with what's available out there, maybe 275/70/16 but in an emergency, you'll be able to run on anything to get you home.

I have Comforser MT (?!) 285/75/16 on my Standard spec 1HZ 105. Definitely less guts than is ideal, though, going slowly she will go anywhere. The tyres are half the price of BFGs, and have held up well both on and off road. I keep them at 3.2 Bar. They're a bit noisy on tar, but I can live with that.

But here's a question that I've always wanted a numerate grown-up to answer for me.

While won't make a huge difference at low speed, doesn't that mean 80kph on the clock, with the bigger tyres, is actually 105kph on the road? Which is why our trucks with big tyres don't seem to go very fast, according to the speedo, but do actually seem to more or less keep up with everything else on the road...

Maths isn't my strong point. So I may have this backward, upside down, or inside out. As I say, I'd really appreciate an answer from a numerate grown-up.

I can't help with the math but its true the bigger the tyre the faster you go ,what makes it seem slow is your engine has to work much harder to get up to speed .

I was looking at them Comforser tyres recently they look meaty and i was going to mention them to Clive but didn't bother because i couldn't find a worthwhile review .

Hey, Shane - over the past 15 years my Cruisers have got through lots of BFGs, a couple of rotations of Bridgestone Desert Duellers, and some Pirelli Scorpions. A mix of fast tar, round town (with epic African pot-holes), and probably more than average off road ranging from desert to volcanic to black cotton soil wet and dry, and pretty much everything in between. I estimate I've driven 250,000 kms in my various LCs over that time. On average, I would say that my tyres last 50,000 Kms with the usage they get. That doesn't include the three virtually new tyres ripped to pieces on a crossing of the Marsabit shield volcano.

The Comforsers were fitted new by the guy I bought the 105 from as part of my negotiation with him. So I didn't pay for them, and I didn't get much choice in the matter. They worked out at approx USD200 per boot, rather than the USD400 a BFG costs in Kenya, so that's in their favor. I have the Mud Track tread, which to be honest is way chunkier than I need.

Downsides: They are really heavy tyres, with terrible 'natural balance' (the wheel guys used over a kilo of lead to get them running smoothly) - which of course reflects lower manufacturing quality, as you'd expect. They are a lot noisier than the BFG A/T on my 80 - but that's a function of the tread pattern. There's a particular, insistent noise at about 90kph, and on certain road surfaces. And I suspect they dragged the fuel consumption up, though I can't give a number on that since I've only owned the vehicle with these tyres on, and didn't drive it much before I bought it.

Upside: They're strong tyres. I've done about 10,000 kms so far, much on some rough tracks (including on volcanic rock, which is a tyre killer), and there's not a scratch on them yet. The tread is wearing reasonably well. I run them at 3.2 Bar (46PSI), and they grip well in the wet.

Conclusion; If I had another thousand dollars spare to spend next time I change tyres, I might go back to BFGs. But so far, the Comforser M/T are wearing well, dealing with the terrain, and rolling smoothly on wet roads and dry. I don't know what the price differential is in the UK, but for half the price of the best, I reckon they are better than half as good.

Let me know if you want any other detail.

i am running 235/85r16's on the 105 - based on the fact that the 1HZ can do with the lesser rolling friction, and also the very wide spread availability of this tyre size around the place ( not that I've replaced one yet... but when looking, i did find it was easy to find all over the place ). I guess someone / something more popular than a LandCruiser also uses the same tyre size.

running on bfg ko2's at the moment.

the truck came with general ameritrack AT - very very hard compound, it was very unsettling driving on those. to a point where i thought it was the suspension that was shot.

I've also found that running between 42 and 44 psi, both front and rear, is the best overall drive. I guess the handbook numbers ( 38 / 54 ) are based on stock truck, running the full stock load.

And here's the answer to the question. Brilliant little app.
http://powerdog.com/tiresize.cgi