The right engine oil for 1KD-FTV?

The only knowledge I gained was by looking the specification of original Toyota FE 5w30 oil called the "fuel economy" which is supposed to be for vehicles without DPF filter - older diesels like 1KD-FTV in j95.
I compared the original's specification to Castrol oil and found out:

Castrol magnatec professional A5 5W-30 comes the closest to the original oil according to the specification, should I be using it?
I'm so focused on Castrol and 5w30 oil because I always went by the rule of "don't change the brand/type of oil if it works good", maybe I'm wrong.

I do think 5w/30 is the correct original oil spec. I've been using Valvoline 10w/40 in mine since Moses was a lad. I have been doing big miles in it up to now, so a lot of time at higher engine temps, so the slightly thicker grade suits what I do.
K

Where do you live , if you live in the UK 5W-30 CF or 5w-40 CF is the right choice and you can go to ASDA and buy ASDA fully synthetic 5w-30 CF or 5w-40 CF for about £15 per 5 litres and drops down to £12 when on offer , ASDA dont make oil they buy it from big oil makers I think Texaco supply it for them and their fully syn oil by far surpasses the oil grade Toyota spec for your car , and at that price its cheap enough to change your oil every six months and then your engine cant get any better love than that , no need to have to buy C2 or C3 type oil because you dont have a dpf , but the asda oil even covers that spec .
Last edited by a moderator: Jan 27, 2021
K

I live in Slovenia, Europe. I'm thinking of getting 5w30 as the mornings are quite cold during the winter: down to -20°C on the coldest days and my work commute is 30 kilometers in one direction so I think 5w30 would suit me most. I will most likely use Castrol Edge C3 because it has a CF specification. I was also looking at the Castrol Vecton Fuel Saver 5W-30 E6/E9 because of the API CJ-4 specification which is the later, upgraded version of the API CF-4 (as I understand it). This oil though is for commercial vehicles/trucks, but I guess I could also use it. API CJ-4 is supposed to be backward compatible with API CF-4.
I think API CJ-4 and API CF are both good oil specifications for my engine but which one is "better" or more suitable 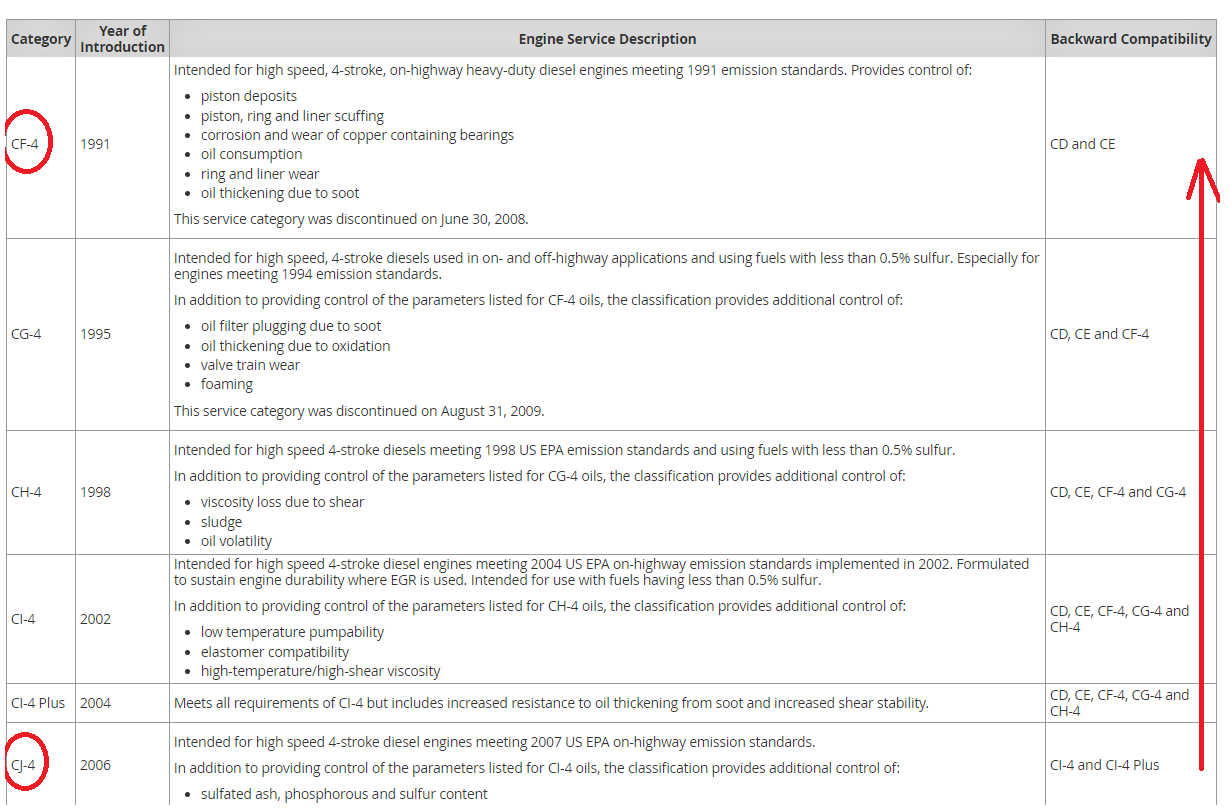 CF replaced CF-4 , CF-4 is now out dated . I get my oil 5W-40 full synthetic oil in bulk when LIDL sell it for 17.99 euros for 5 litres , Lidl only sell it around three times a year so I make sure I always have 50 litres in stock at home as I change my oil every six months on my 1KD-FTV , here in Cyprus full synthetic 5w-30 or 5w-40 oil sells in most places for 50 euros for 5 litres , so lucky we have Lidl that sells it cheap , only thing is they do not sell it all year round so it pays to always stock up .
K

Regular oil changes are the best thing one can do for their engines for less wear even better when using full synthetic oil , sludge etc is usually due to neglecting oil changes , plus full synthetic oil can take much higher temps and pressure and mileage than semi syn or mineral before the oil starts to breaks down and form sludge build up , and its a very good practice to let a turbo engine run on idle for a minute or more after a run even idle for 2 mins after a long run to cool the turbo and the oil to stop the oil breaking down and starving the turbo of fresh lube cooling oil .

Definitely go for the lighter grade option so, with those temperatures! Once in my ownership has the temperature gotten near that in Ireland, -17.5 °C and nearby for a week back in 2010, but the truck fired up every morning without hesitation. Long winters with that might make it harder though.
J

TONYCY11 said:
Regular oil changes are the best thing one can do for their engines for less wear even better when using full synthetic oil , sludge etc is usually due to neglecting oil changes , plus full synthetic oil can take much higher temps and pressure and mileage than semi syn or mineral before the oil starts to breaks down and form sludge build up , and its a very good practice to let a turbo engine run on idle for a minute or more after a run even idle for 2 mins after a long run to cool the turbo and the oil to stop the oil breaking down and starving the turbo of fresh lube cooling oil .
Click to expand...

Yes a thousand fold.
I've always looked after my engines with regular oil changes (and don't forget to renew the coolant with a decent quality product too), and allow them to warm up a bit before requiring them to work hard and to warm down again after hard work, the latter especially important where turbochargers are fitted.

I've seen some staggering sights at engine strip down time, used to run several Merc 124's (still have one), my MB indy showed me 2 x V12s he had stripped down a few years ago, the valve gear absolutely disappeared under piles of thick baked on sludge last seen on 70's Fords, entirely the result of neglect even if they were technically serviced on time the owners didn't take their typical use meaning they should have had arduous use servicing instead of leaving the oil in for typical normal use timeline.

Currently for my 120 Diesel i have 5W40 Castrol full synthetic running through its veins, Diesel specific which is something i've returned to as finding Diesel specific oils has become a little easier over the last few years, previously all the oils tended to be multi fuel use unless you ventured into really heavy duty oils aimed at the truck market.
When i first got the 120 it had been serviced correctly and almost always at Toyota main dealers, on time or in most cases well before time so not a neglected vehicle at all, but i noticed after i changed the oil the first time it was black again a matter of weeks, but after several oil services using whatever Diesel specific oil i might have found at the right price bought in 20 litre drums i noticed the oil gradually staying clear longer and now it's near on 1000 miles before the oil starts to darken, i believe it is the better detergents in Diesel specific oil that has cleaned the crankcase over time.
Used EXOL 10w40 Diesel specific for a while when 5W40 Fuchs or Millers wasn't available at bargainous prices, badge snob? i dunno, i won't pay gucci prices for oil thats not going to be in for 5k miles but if i can find a good known brand at the right price i'll snap it up.

Nothing wrong with 5W30 of course, but as one can see above from the Toyota handbook oil spec page pictured there's a fair bit of choice for owners depending on the temp range where you live and your typical usage, but as Tony says it's regular changes that keep things running well.

As for mechanical sympathy, warm up cool down, well that goes for my work vehicles as well as my own, been on the artics, mainly car transporters and latterly tankers for 45 years now, covered over 3 million miles mainly with turbocharged Deisels and am yet as far as i can recall to have a single turbocharger failure, where on some vehicles at places i've worked they've been regular failures especially where used by the thrash it from cold and cut the engine off with the turbo glowing red haven't-a-minute-to-live merchants.
Out of interest my current wagon, 2 year old MAN now on 300k kms, has just had its third oil change on full maker's R&M package, and is filled with 5W30 full synthetic, probably in excess of 5 gallons sump capacity, but truck engines do have proper oil spinners to remove the nasties.

Looking after your vehicles pays you back many fold, yes such attentive servicing is bloody dear if you can't be arsed to change your own oil and pay a dealer's ridiculous charges for oil at service times, but it costs peanuts if you buy sensibly in bulk (including filters when on offer) and DIY, even the most ham fisted should be able to change their own engine oil at an interim time between dealer services if they have a car still under warranty or wish to keep the full dealer service history up.
Last edited: Feb 1, 2021
D

Totally agree with you Juddian , but the trouble with taking your car to a dealer or garage is , they dont let the oil drain out long enough to get all or most of the old oil out for two reasons 1 , time is money and they want cars in and out as fast as they can and 2, if they let ALL the oil drain out by letting the it drain for 4 or 5 hours means when refilling with new oil it will need around a extra litre in cars like a 120 or other engines with 7 litre sumps , so it will cost them more , thats why in taking your car to them for a oil change by the time you have got home your oil will look dirty because it has mixed with the dirty oil left in the engine , and the 120 is sooo easy to change the oil and filter on par with cars of the 1970s , so why would some one take it to a garage , on some cars I have owned in the past and some of the cars my kids had have been a twat to service , like we had 2 honda accords that the oil filter was under the inlet manifold at the back under the bulkhead so it meant crawling well under the car and reaching up to undo the oil filter even though you can not see it so had to feel your way to it , with the driveshaft and other stuff in the way aswell as the exhaust that ran under the shafts so you always ended up burning your wrists and could not help getting oil on the exhaust pipe when undoing the oil filter and it stunk of burnt oil when starting the car and was a fire hazard even though I wiped it off best I could . but back on the subject of the 120 , if you delete the egr valve the oil stays much cleaner for much longer on par with a petrol engine because of no exhaust gas is remixing with the oil .
T

Some good write ups and examples on this thread.
You must log in or register to reply here.

Which engine oil are you using?

The Advantages of Synthetic Oils over Mineral oils