overall she seems like a good old thing however the shifter for the transfer box is stuck in H. for the time being this isn’t a problem because I’m not in any hurry to use her round the farm.

The box has oil in it and on inspection seems to have been off at some point (flanges where it bolts on have new looking orange liquid gasket around them. not something you would expect to see on a 16 year old car.)


There aren’t any horrible noises and it drives fine where it is however I do want to do something about this. There is a good chance it has never been used in anything other than H and it’s got stuck or if it has been taken off its been put back wrong.


Is this a common problem?

Nick Bushell said:
There is a good chance it has never been used in anything other than H and it’s got stuck or if it has been taken off its been put back wrong.
Click to expand...

If the Transfer Lever has been removed, there is a good chance that it has been put back wrong.

If you remove the centre console and the rubber boots the Transfer Lever is held into the turret by a snap ring - its easy to remove it.

Have a look down the hole . . There are two selector shafts, each has a steel block with a cutout on the end:- 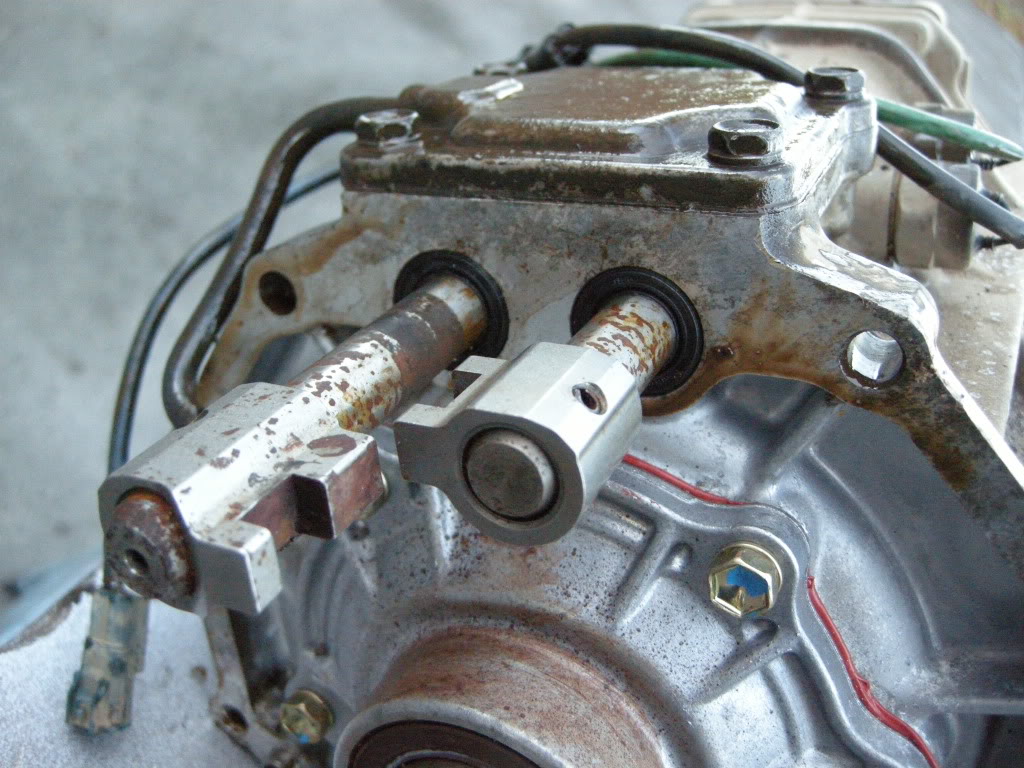 This one is from an Autobox - the manual version has the selectors inside the transfer box.


It should be possible to move the right-hand one (from the top, looking towards the front of the car) back so that the two line-up (this is 'HL'). They are interlocked so you shouldn't be able to move both.

The pointy end of the Transfer Lever goes between them.

Re-install the transfer lever and see if that fixes the problem.

I've seen this happen before


If it doesn't fix it - give the box an oil change and keep using it and trying the lever. There is an oil pump in there that should lubricate everything.

you sir a a diamond. It was exactly as you described! thanks very much for your help

Nick Bushell said:
you sir a a diamond. It was exactly as you described! thanks very much for your help
nick
Click to expand...

Hi new here, ive recently got a 3.0td auto colorado 95 i believe its a 1997. Im having the same problem with the high low shifter stuck i have stripped it down from i side and tried to move the H L shaft with some force but it does not want to budge into gear it has some movement but not enough im thinking next i will have to take the box off and have somebody look at it ?
Thanks andrew
You must log in or register to reply here.
Share:
Facebook Reddit Pinterest Tumblr WhatsApp Email Link
Top Bottom
✖
AdBlock Detected