Below is a (growing) FAQ for the 90 series as well as some interesting posts people have made about it.

Wiring diagram for 2000 PRADO. I think LC 90 falls under this range. You can save it - PDF file.
http://landcruiser.grundahl.ca/Toyota%2 ... iagram.pdf

Excellent reference for all your engine types plus maintenance tips with very good illustrations.
Just click on the topics on your left drop down window.
http://arrc.epnet.com/autoapp/8682/8682 ... ntrols.htm
B

http://www.markerink.org/WJM/HTML/toy_90_i.htm
very interesting info on the 90 series and its variants...

lekiboy said:
Wiring diagram for 2000 PRADO. I think LC 90 falls under this range. You can save it - PDF file.
http://landcruiser.grundahl.ca/Toyota%2 ... iagram.pdf
Click to expand...

looking for the wiring diagram for my kzj-90 any link other than the above as it's not working?
Don't like the adverts?  Click here to remove them
J

Crispin said:
Below is a (growing) FAQ for the 90 series as well as some interesting posts people have made about it.

Is there something wrong with the links as when I click on any of them I just get taken to the index page? Used to work for me?

Beau has a video on removing a 1kzte and it is absolutely brilliant.The only other thing I would do next time is take plenty of photos so you do not make any mistakes when reassembling.Please add vid to the tech thread.
P

Hi There I own a 3.4 petrol auto Prado and wanted to know who in the Cape Town area would be the best to advise me on the following.

Auto gearbox gives a solid knock when reverse is engaged. A similar less intense knock I'd felt when putting it into Drive.

The second major problem is the terrible vibration when driving. The vibration disappears when the petrol is released. FYI I have had the propshaft knuckle repairs but now I'm not sure whether the guy messed up doing the job. The forums advice would be highly appreciated. [emoji1]

Thought you might want to add this. I made a short video of how to remove the Denso Injector Pumps out of these engines.

Shayne said:
Well done Beau and keep it up i hope your vids will one day give me the courage to strip and rebuild my truck

Thanks Shayne! Hopefully your engine has hundreds of thousand more miles left on it before you need to be thinking of a rebuild I took them off and had a play and then i thought no there's a pro classic car restoration place down the road who are bound to have the proper tools for the job and i have plenty of other stuff to do .

Anyway i'm about to start butchering with a hacksaw , grinder and a hammer because i am replacing all ball joints and bushes before they go back in and while on tea break i thought i would post this up to see if anyone has any tool purchase suggestions ?
Last edited: Apr 21, 2017

And today's lesson on how not to do things .

I first tried welding a bar on hoping to twist the lower control arm bush out but all i got was fire and the weld wouldn't take , i'm a crap welder so it might have done had i persisted but i wasn't sure it was the best way forward anyway .

Instead i put the Toyota in jack in (its the only one i have small enough to fit) and cut the ends off the inner sleeve , and low and behold this worked = progress

A moment later i realized i couldn't remove the jack 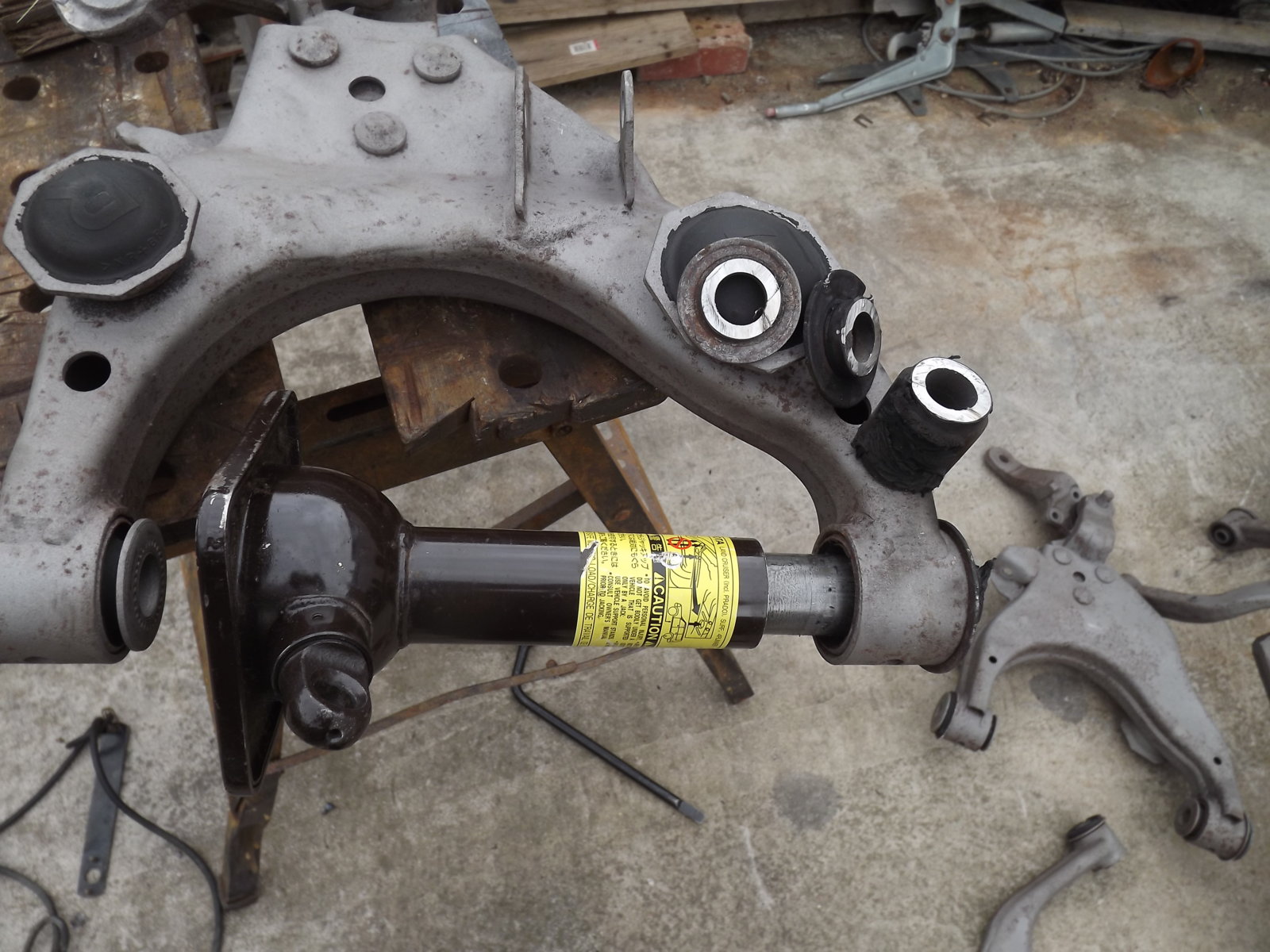 Hence another tea break which has allowed me to work out i can jack the jack out if i wedge the arm under the tow hitch or something , with the socket between of course

And after much time wasted trying to remedy my earlier mistake eventually removing the Toyota jack with a farm jack and socket and lots of and lots of failed balancing acts because i'm not an octopus .

It's out without buying any tools . 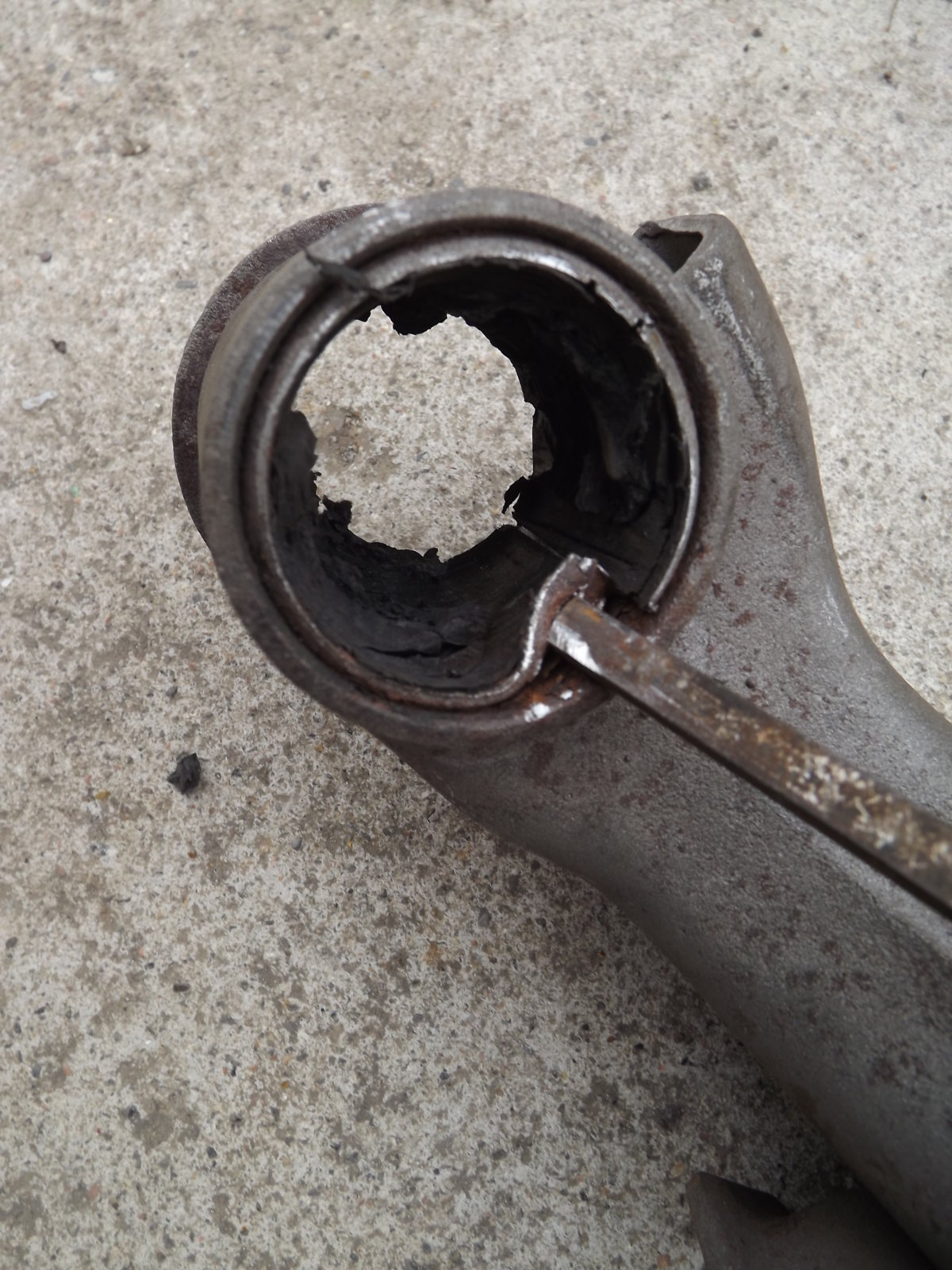 Now i have a plan instead of making it up as i go along i hope the other 7 bushes will be out in the same time frame as it took me to do the first one .

Shayne, I literally just did this bush last week. Wasn't as bad as I expected. One slit on that outer sleeve was all I needed to remove the tension and hit it out. Penetrating oil is your best friend here too. What are you replacing them with by the way?

I seen yours Beau i was going to ask if you can think of any tools that might help but figured i might be finished before i get a reply from you in your new time zone hence i posted here instead . I got Whiteline bushes .

For dismantling the rust remover i use has replaced penetrating oil completely .

I should note that the second one was out in maybe 20 minutes because i put a bolt in the bush with a 17mm socket on it for the jack to seat against .
Last edited: Apr 21, 2017
You must log in or register to reply here.