) I've decided to remove my fully functional AHC and replace it with just 'normal' springs and shockers. I like the smooth ride AHC gives on road on the Normal setting but it's not so good in High, being a bit bouncy, and each time I select High I wonder if I'm going to get it. So today I disconnected and removed most of the AHC and I thought I'd start writing it up before I forget an important detail.

First I dropped it into the Low position and then I pulled the AHC fuse out in the engine bay fuse box so that the AHC won't try doing anything silly if I start the car for some reason part way through! Then, because there is still pressure in the system on the Low setting I opened the blead nipples on all 4 actuators and also on the accumulator. Keep in mind this will drop the truck right down onto it's bump stops so don't get squished

Next I disconnected the hydraulic lines from the top of the rear shockers, 2 x 12mm bolts each and pull the fitting up to get it off once those are undone. Access is a bit tight although my 40mm body lift helps give a bit more room. With the pipe out of the way you'll see the 22mm nut on the top of the shaft. A regular size 22mm socket isn't quite deep enough and there's not enough room for a long reach socket so I used a spanner. Of course like all shockers when you turn the nut at the top the whole upper body of the shocker rotates with it! I used some pipe grips to hold the shocker still but you destroy the shocker in the process.

With the tops disconected, I undid the anti-roll bar bolts at the chassis (2 x 12mm each side) so I could drop the ARB out of the way. Then I undid the lower shock mounting bolts (17mm), slid the shocks off and emptied them out into my oil tub. Mostly clear fluid came out but right at the bottom was some milky fluid, possibly the disolved remains of my old sphere membranes.

Next I jacked the back end up far enough to pull the old springs out and swap in the RidePro ZC7565's I got from Overland Cruisers, then installed the custom valved Bilstein shockers I also got from Julian

and refitted the ARB.

With the back finished I put the front on axle stands and removed the wheels, slacked off and then removed the torsion bar adjusting bolt and undid the pipe from the top of the shockers which are held on the same way as the rears. On mine the 22mm top nut didn't want to come off and it took a fair bit of swearing and grunting before they finaly came undone! Then it was an easy job to undo the bottom mounting nut & bolt and remove the shocker. Fitting the new shockers was very easy and obvious what to do!

There was nothing very complicated / tricky to doing this job, I still have some AHC components to remove but it was a bit of a rush job to have it all done for late afternoon and still be able to fetch my daughter from the stables so no pictures :-(

Jon, busy day with spanners as well, Did you disconnect the AHC ECU?

Not yet. All I've removed so far apart from springs and rams is the front ram pipes and sensors and the fuse. The front pipes and sensors came off today because I could get at them more easily with the front wheels being off anyway. The rest I'll take off as and when when I get chance this week. The space where the reservoir and pump go should be just right for the LPG conversion parts I needed to squeeze in there somewhere

I will remove the ECU and the Slee lock out kit even though they're not really in the way and add them to the big box of AHC spares!

Lots of stuff isn't there
With all the stuff removed from the chassis rails, there is a lot of space under the sills, I am planning to use mine for water storage
LPG tanks for yours would be perfect, keeping there weight low and centered

So you've gone and done it, Jon

Out of interest, how much lift has this given you? I presume you've aimed to keep it roughly in line with the AHC "High" setting?


Andrew Prince said:
So you've gone and done it, Jon

Out of interest, how much lift has this given you? I presume you've aimed to keep it roughly in line with the AHC "High" setting?

Only about 20mm of lift at the moment so I'll have to decide between stiffer springs or spacers once I've found out what rate the current springs are. Once I do a diff drop I should be able to go a bit higher than the AHC because the Bilsteins are longer than the AHC parts. I have some polyair bags to put in once I've got the height right so it can cope with being loaded up occasionaly without running round on super stiff springs the rest of the time but I have a comfotable base line to work from now.

Things have settled a bit and I've been round to PtP's to measure a standard truck. The lift is about 30mm which is exactly what the springs are supposed to give with +200Kg now I've got the spec. Interestingly the same springs are rated for 70mm lift on an 80 and if you compare springs on the Slee web site it's a similar story so the 100 series (IFS) must have longer standard springs than an 80 / 105.

I will be making some 40mm spacers when the billets turn up and then modify a spare front diff cross member I have to do a diff drop and get the front up higher (currently sitting 10 mm lower than the rear so the front will only need to go up another 20mm or so).

I was just going through your last post. You say you are goin to modify the cross member for the Diff drop.
I have also wanted to do the same to my VX but have not been able to get the exact dimensions of the new cross member. I was going to fabricate a new one.
Do you have the dimensions for it?

Navraj Singh said:
Do you have the dimensions for it?
Click to expand...

Not yet, the spare cross member is still in the shed waiting for me to get to that stage of the lift but when I fetch it out and modify it I will document what I do on here. Should be in the next week or two

Jon Wildsmith said:
[quote="Navraj Singh":nq3071pf]
Do you have the dimensions for it?
Click to expand...

Not yet, the spare cross member is still in the shed waiting for me to get to that stage of the lift but when I fetch it out and modify it I will document what I do on here. Should be in the next week or two

I will be watching with interest

This is what I did:

Got a bit further with the lift today. Jacked it up so I could get at the rear springs: Decent droop at the back 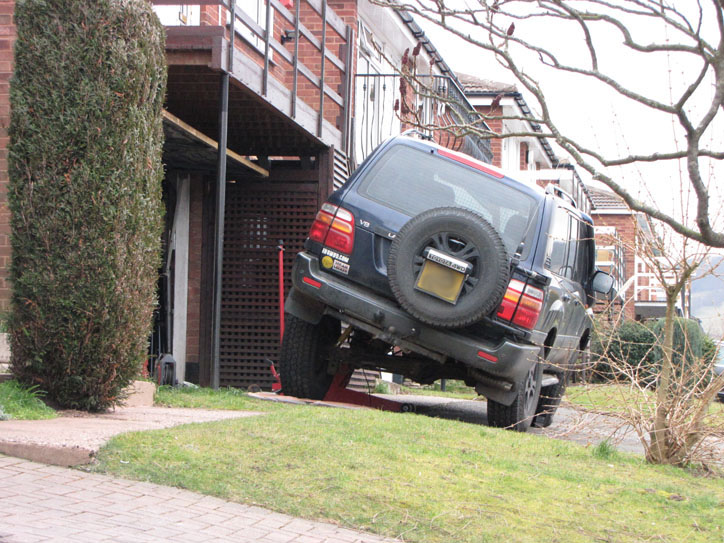 Not a lot at the front I measured the free length of the RidePro rear springs and it turns out they're about 30mm shorter than the OME 863's (uncompressed) which I would guess translates into about 20-25mm shorter loaded. I was adding 45mm spacers I'd made from some aluminium billets anyway to get about a 75mm lift and I also put some poly-air bags in while I was at it to maintain the height when she's loaded up.

Sits at a better height now Need to get the Simex on, 35's are looking a bit small 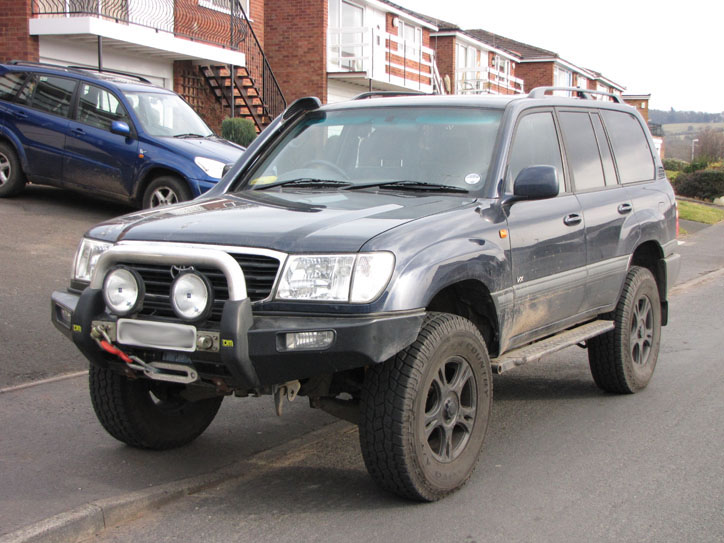 Jon, do you have special gro-more type stuff in your drive, its just getting taller and taller
Back axle looks great, plenty of flex

The shocks are not as long as I was expecting, especially in the front, only about 15mm longer than OME's fully extended, will have to think about bump stop spacers and making some extensions or see how your Fox's turn out. Are you bringing your JD arms tomorrow so I can look at them?

Navraj Singh said:
I was just going through your last post. You say you are goin to modify the cross member for the Diff drop.
I have also wanted to do the same to my VX but have not been able to get the exact dimensions of the new cross member. I was going to fabricate a new one.
Do you have the dimensions for it?
Click to expand...

If you search on ih8mud.com you should be able to find the plans/dimensions for the diff drop kits.

Stripped off the remainder of the AHC components today. A couple of the bolts on top of the chassis are a bit of a PITA to get at and some of the pipes are a bit of a jigsaw puzzle to get free if you were trying to keep them intact. Plenty of corrosion on some of the parts I took off so I'm glad I won't be having to deal with the problems that could have caused at a later date. Also stripped the AHC wiring loom back to by the rear spring tops and removed the ECU from inside.

*after* i'd put the shiney new Bilsteins on I realised I should have taken some measurements! I have some OEM AHC rams and some OME's on the shelf so they were easy enough to measure and I took one of the rear Bilsteins off again to measure this morning. I'll do one of the front Bilsteins soon and add those dimensions to this post. I measured from the centre of the lower mounting hole to the top of the 1st bush. Add the thickness of a washer and subtract however much the bush will compress for installed lengths

The closed lengths will have the greatest error because it's quite hard holding the OME & Bilsteins closed by hand while at the same time measuring.

and thanks to Julian we have the following:

On the Fox fronts, you need to add 20mm for the Stud to pin converter

not sure those are the same measuring points though?

On the fronts, you need to add 20mm for the Stud to pin converter and I am not strong enough to compress them for closed lengths
You must log in or register to reply here.

G
How to lift front