Betsy, and a few problems thanks to Roo Systems in Brisbane

Good luck, will be interesting to see what happens.

I can't explain enough how rubbish their whole business is. They seem to be there to make as much money as possible from the australian public without any concern about customer service, satisfaction or their workmanship!
I have mentioned things on FB and their forum but have been edited out. If you see any other posts on the action forum, feel free to post this link, so more Aussie 4 wheel drivers don't get ripped off.

Did you read my full report?

If there is one blessing anywhere in this it's that you had the experience & foresight to get it sorted before heading off into the bush! Absolutely appalling but could have so easily been fatal!

At least FNB were able to sort it out!

Is it also worth posting as a warning on the yank sites?
T

Euan McGilp said:
If there is one blessing anywhere in this it's that you had the experience & foresight to get it sorted before heading off into the bush! Absolutely appalling but could have so easily been fatal!

They had over 3 months to sort her out, and they weren't finished when we arrived to pick her up! Then they hadn't bothered with the suspension, so with the weight on the back, she handled really badly! The DBS was on red so pushing too many volts around, this became apparent before I left the Brisbane! Alarm bells were certainly ringing then!

By the time we limped into Warwick, I was pretty pi***d off, and then a further expense for new front shocks and steering stabiliser to replace the rusty ones roosystems left on, and airbags on the back, definitely changed our travel plans. So yes, they screwed with our Queensland trip too!

At least FNB were able to sort it out!

They have been brilliant, and after seeing the workmanship, or lack of it decided to photograph everything they found, which was every job roosystems carried out.


Is it also worth posting as a warning on the yank sites?
Click to expand...

Could well be, but for now I just want to try to save Australia from this rip off bunch of self promoting rogues!

I meant to reply to each quote so it obviously showed, messed up somewhere! Whoops!

I now understand the history as to why there is so much "love" for 4WD(in)Action here...

Makes me realise how lucky I was with the garages I infrequently used in Australia; I only had one that wanted to take me for a ride, but that was a non-critical moment, and luckily I then found another who was really good (LPG RWC in NSW)

I was fortunate to use a lot of garages recommended to me by others, or were run by people we knew via another person (one a friend on another forum, the other a work friend's Dad) OK our exhaust wasn't as tidy as a mandrel bent system, but it was a 2 1/2" system for $700 fitted, and the whole pipework from the new headers back was custom made as they didn't have a kit for the FJ73, done at a place recommended by the above Dad and another friend.

Word of mouth goes a long way in Australia, and that can go both ways very easily.

Good luck with it; I'll let the guys know about the issues you've had on the other forum I use where there are a couple of guys who 4wd as well.

Sounds like a job for the boys, to me. If that happened here, the premises would mysteriously catch fire one night...

I'm always miffed that I have to pay through the nose for work on my 80, but fair play, they do a fine job. For example, replaced front CVs and wheel bearings 6 years and 120k km ago (with a lot of mountain offroad) no room even for any adjustment, they're just as when fitted.
Don't like the adverts?  Click here to remove them

clivehorridge said:
Sounds like a job for the boys, to me. If that happened here, the premises would mysteriously catch fire one night...
Click to expand...

That's the same with some of the lads I know down in Sydney... there could be a visit from some motorcyclists.... He has a very nice Pro-Street hotrod which may have been featured in a magazine article by now, unfortunately that can be an advert to some less than desirable people; the conclusion was that his car would be safe as he is "connected" I suspect the car would be found and so would the people responsible for it going missing a lot quicker than the Police could find it...

I have a limited number of garages that I use for work on my vehicles, and I'll travel to get the work done; I used travel over an hour to get my V70 serviced in the UK as I didn't trust the local dealer, the GF's BMW only gets work done at the local garage, and the Land Cruiser was only worked on by us or a friend's Dad who is a mechanic. When I get back to Aus I'm likely to get a car from near Ballarat as I have a friend down there who is a mechanic and works on 4wd's a lot, and then up in NSW it'll go to my friend's Dad.

Certainly I'd look at using the guys who Ben and Tony suggest, and look to them for suggestions on gear. Unfortunately Terrain Tamer (another company who seem to be in on the 4WDAction Love-in) is the predominate company that a lot of the company's deal with for 4wd spares...
T

After travelling and owning three toyotas over the last 13 years, the only company I have come across that are brilliant, is FNB 4wd in Mt Barker, near Adelaide.

Chris who owns it is so conscientious and his mechanics excellent. He has helped other friends of mine find trucks, and nothing is too much for bother for him. Recommend a chat before buying a truck down under.

Thanks for the suggestion of Chris; I've had a look at his website so I'll find his contact details there. Unfortunately Adelaide isn't quite on my current route plan in the 2 weeks before I start at UNE in Armidale in June...

Any help and advice though is gratefully received!

Ed I'd recommend Darren at Autocraft for anything Land Cruiser http://www.landcruiserclub.net/forums/showthread.php/45115-Darren-McRae-Autocraft-Australia
Although in Geelong, he is the guru. Armidale isn't too far from Brisbane [in Aussie terms] so if you have a look at LCOOL in the queensland section you'll see a bunch of Land Cruiser owners [via Voodoo] meet every Friday night http://www.lcool.org/forum/viewtopic.php?t=21892 so you could make a weekend of it.
Take blankets for Armidale - winters are almost as bad as English springs.......

Had a flick through the last copy of 4wd action I received today (subscription now expired and wont be getting renewed.) 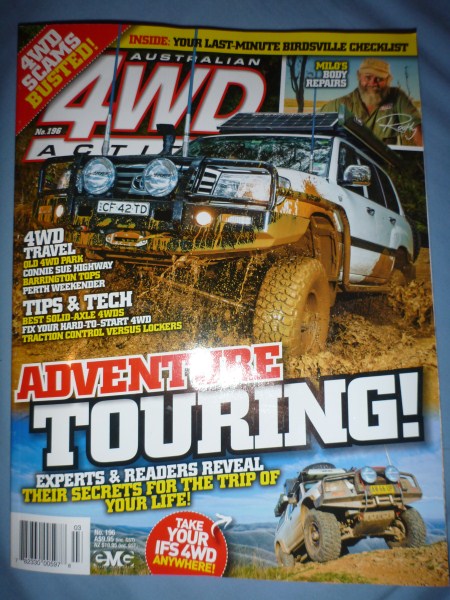 Methinks backhanders may be involved here

What beyond the amount of advertising they plug into the mag? Never... come on Australian Journalism isn't that corrupt, is it News International/Murdoch?!


SimonD said:
Ed I'd recommend Darren at Autocraft for anything Land Cruiser http://www.landcruiserclub.net/forums/showthread.php/45115-Darren-McRae-Autocraft-Australia
Although in Geelong, he is the guru. Armidale isn't too far from Brisbane [in Aussie terms] so if you have a look at LCOOL in the queensland section you'll see a bunch of Land Cruiser owners [via Voodoo] meet every Friday night http://www.lcool.org/forum/viewtopic.php?t=21892 so you could make a weekend of it.
Take blankets for Armidale - winters are almost as bad as English springs.......
Click to expand...

I wonder if that's near the breakers yard that Ben went to for his seatbelts?

I know what the weather's like up in Farmidale; when we were travelling in 2010 we had ice on the van when we stayed at Glen Innes... we did go swag camping at this time of year last year; all of April in swags was good fun!

Thanks for the heads up on the LCOOL guys; I think we'll be doing a mix of mountain biking and exploring this time, as we're bringing both of our bikes over.


Looking at 4WD Action now having not seen it for a long time it does seem very basic in terms of the headline maintenance articles; How to fix your hard to start vehicle... is it really that tricky to work out what the problems might be? And how to avoid the 4wd Scams? I think the conclusion here is not to use any of the advertisers in their magazine!

Paddler Ed said:
What beyond the amount of advertising they plug into the mag? Never... come on Australian Journalism isn't that corrupt, is it News International/Murdoch?!
Click to expand...

I wouldn't be surprised if Australian journos weren't as corrupt as anywhere else where money is concerned. I was thinking backhanders to Roothy for selling his integrity by recommending crap companies!

Maybe any one they actually recommend in the mag could be dodgy, but there are many good advertisers in there that are very good and just buying ad space.
T

Interesting that ARB, TJM, and many other large companies have pulled out!

The wreckers yard I got the seat belts out of was in Sunshine Ed. I wouldn't have driven all the way to Geelong for them.

TonyS said:
Interesting that ARB, TJM, and many other large companies have pulled out!
Click to expand...

Thats because Tigerz11 (who are owned by the media company behind 4wd action) have copied ARB and TJM products, got them made in China and now sell them dirt cheap.

just an update but things are building up against Roo systems, tigerz and EMG, and their unethical approach to the 4wd industry down under.
Ive posted a few things out there, and have had some interesting feedback.
Keep you posted!

I started this thread so that I'd not derail Ben's build thread; I knew there was a thread about your experiences but I didn't think to search!

Good Luck with it! I'm certainly thinking very carefully about where I'm getting bits from...
Last edited: May 16, 2013

burnt by Roo systems as well

Roo Systems are definitely dodgy. I bought a rooftop tent from them and it arrived with faulty stitching. I reported it and got the I will have the warehouse manager from Melbourne contact you. Good luck if you believe that. Numerous emails and phone calls and still no response.

Warn everyone you know that they are dodgy. Worst service I have ever had. I did have problems with a set of driving lights from Tigerz11 but I persisted for several months and ended up getting replacements.

To add insult to injury the only email I get from them is from their marketing manager offering to sell me more goods.
You must log in or register to reply here.