Well........ same problem, the preheater assembly, as soon as it gets wets it's like a banshee so myself and Ecky took it all apart and cleaned it up.

The bearing would spin freely on your fingers but there was still an ever so slight grinding (literally tiny) to be felt but by no means was the bearing in danger of imminent failure, so we dosed it up with white grease and put it all back together and it was immediately back to normal, no squealing or anything. but then as soon as it got wet again on monday, the squealing was back, ditto for when i jet washed the engine on tuesday. So there is clearly somethig amiss and as i've got some long distance overlanding coming up next year is it wise to replace it???

I've WD40'd it (and similar products) to death and as soon as you put any lubricant anywhere near it, it goes absolutely silent (even water) but as soon as that is washed/dried out it's off again.

I've exhausted my good ideas bank, so before i spend £600 replacing the blighter (Mr T wants £903 for parts alone not inclusive of VAT or labour) i throw the floor open to the experts.....

Tommo, I presume that this bearing is a Toyota only spec? I wanted alternator bearings and went to a specialist who measured them and compared them to everything out there. They were close but no match with anything. This is not uncommon in motor manufactures I understand. So just asking the obvious in terms of any serial number etc. Did Ian not manage to get you something then? He got me the ones I needed at a significant reduction. Is the bearing not available on its own? Could you machine the main part to take a standard bearing?

If the unit is squealing it's stuffed I guess. No amount of WD etc will fix that. Even packing it with grease would be unlikely to resolve it.

Yes it is and the unit is manufactured in such a way that you cannot replace the bearing alone. Unfotunately the part of the assembly i need is not listed as a separate part number and you have to buy the whole thing, pre heater, mag clutch the lot. Ian can get me one for £595 which is a significant reduction but still a painful outlay!

Essentially a component that misbehaves when wet has no busines being under the bonnet of a LandCruiser, but before i smash the piggy bank i just want to ensure i have exhausted all other optons.....

Oh dear. Is the thing essential? I dunno what it does. Can you not bypass it and not have it - for now at least?

Yes i could and we had thought of this, it is just the working part at the other end of the idle up switch. The outer part spins constantly attached to the fanbelt. When the idle up function is selected, the mag clutch engages and the centre part which is normally stationary locks to the rotating outer wheel and spins. As far as i understand it's working, it is for use in extreme cold climates and it stops the cooling water going through the radiator and being cooled and just pumps warm water round the engine till it is up to temperature then cuts out. So, in the UK could i live without it, yes no doubt.

Unfortunately the squealing bearing is attached to the outer part which spins constantly so the noise is there whether the system is selcted or not.

Could i get a shorter beltand completely bypass it?? i have no idea??

I am wary of putting non Toyota belts on though as i've heard from many sources that it can be a recipe for mayhem.

There shouldn't be any feeling of roughness in a bearing, even only slight grinding, so it has definately failed then. Have you asked your Toyota dealer to check the pully / clutch assembly isn't available seperately? Some are more helpful than others ...

Is there a version of your truck that doesn't have this heater and therefore has a shorter belt you could use?
Don't like the adverts?  Click here to remove them

The guy i spoke to said

"nah mate you have to order the whole thing"

but then he gave me a digram of the whole unit broken down and the part i actually need is labelled as 87120G, but he says i can't just buy that part.

pm me your vin again and the main assembly part no. and I'll get you a second opinion if you want.

I literally just need the part with the bearing, the mag clutch and heater assembly are both absolutely fine.

Well not really a surprise but my part guy said the same as your part guy but added to check the pully for a part number because it may be available seperate for another vehicle and show up like that.

Thanks for trying mate, i think i like the idea of getting a shorter belt and isolating the whole system. i think i have used it twice in the entire time i've had the vehicle and that was because it was there rather than i needed it. There is a version of the D4D that doesn't have a pre heater so i don't suppose i'm lucky enough that if i get the belt for that it will fit exactly???

Does your pully look anything like my aircon pully? 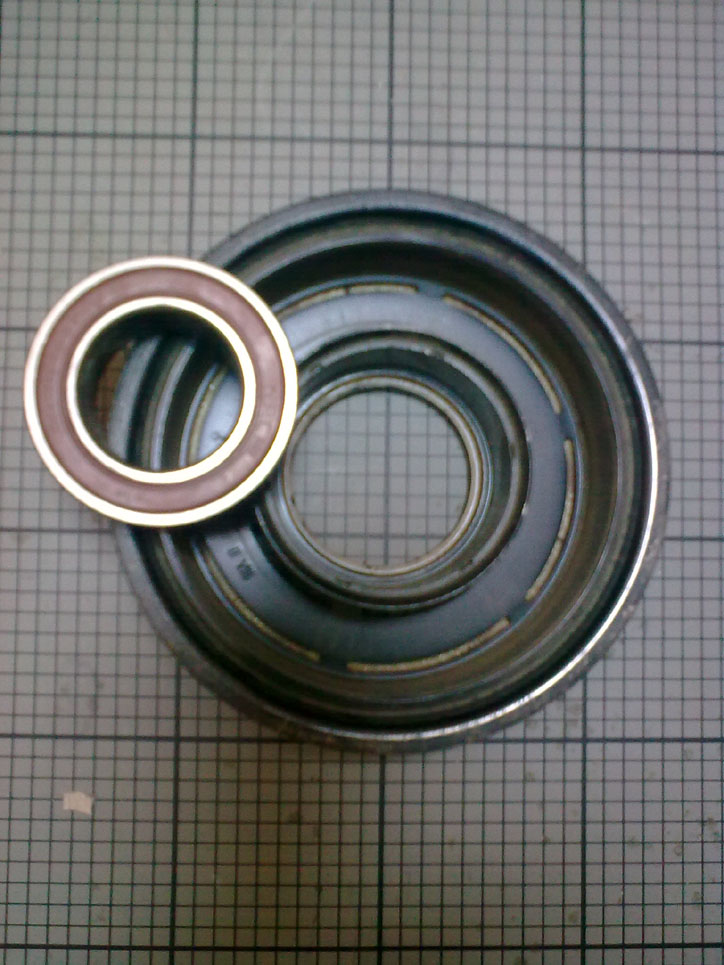 The back of the pulley was staked so I thought pressing the bearing out might take some doing but in fact it took very little effort and I could probably have pushed it out by hand if I'd pushed real hard. On mine the bearing is a Nachi 30BGS10DST which is stamped clearly on the bearing and is a part you can get from bearing places ... Maybe yours is available too?

Yes it is similar and it's an NSK bearing, i'll take it off again tomorrow and get the bearing number.

Didn't I say that?

i think you did yes, but i thought you couldn't get the bearing out as there appears to be a rim around it, but if Jon managed to push his out maybe i will too.....

Aw, I'm only pulling your leg. Sure you Navy types can take it. Oh, got some great pics to send you. Came from Uncle Bob. All military stuff.

Seeing as the Aus / SA spec trucks don't have this feature, could you not either get the idler that they use (if they do) or the shorter belt?

That way we can sort the bearing out at leisure.
You must log in or register to reply here.