'10:00 am rendevous at Tesco's in Bangor' were the last instructions received from Jim's (Jimbo4x4) smessage on Easter Sunday evening which sparked a furious flap of preparation at Chez Gavlad, fuelled by an afternoon roast dinner & the accompanying excessive dwinkee poos with my Ma & Pa after being newly returned from their month in New Zealand...

) away from the local mud pit... DEP Wirral ~07:45 for a leisurely cruise out to Bangor down the A55 via McDonalds. On the last roundabout before arrival at Bangor, MUX's dull growl of a mostly removed exhaust suddenly becomes more of a roar. Yup, the last bit had broken off so the zorst now finishes just afer the flexible section - its loud...

Anyhoo, Jim lands & he's got all the routes punched in on his laptop & I'm completely in his hands. Off we go.

The first lane is undrivable due to fly tippers so we head round the tarmac twisties through the wind & rain over towards Capel Curig past Tryfn & the Nant Ffrancon valley. Even the tarmac sections are fun in the wet & the scenery is dramatic. One of my gloves attempts to make an escape while Jim's setting his bearings atthe foor of Tryfn - my 100 yard dash secures that badboy

The first lane is one I have walked sections of in the past - Tan-y-Garth (thanks for the info Jim ) It skirts around Moel Saibod to the forestry commission area after a very nice rocky climb up through the woods. I got a couple of (poor) photos of Jim but was enjoying it all so much thereafter, I forgot to take any more Lots of gorse... (Crispin, take a strimmer if you go ;-)) 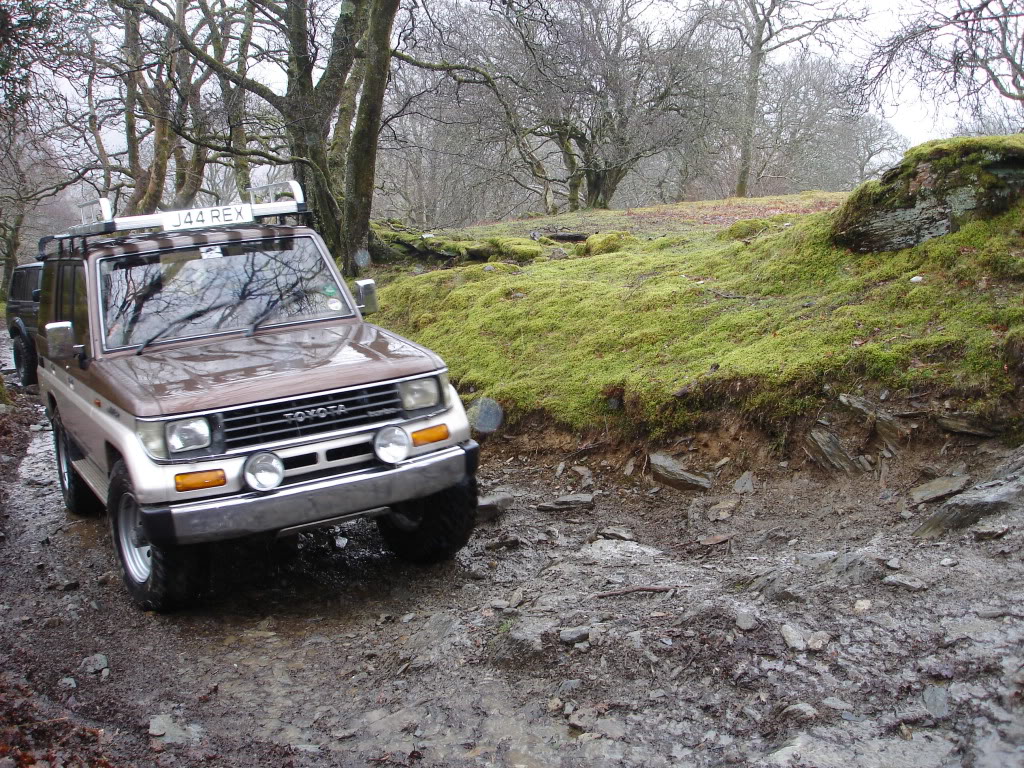 Another blast along some tarmac got us over to Sarn Helen - what a wonderful lane... This hooks us up from Pont-y-Pant to Betws-y-Coed. Just after I skin MUX's flares on a tight gatepost even with Jim spotting me we pass the abandoned farmhouse - someone's next 'Grand Design' in a beautiful spot... Shame the camera had one of its funny turns On we go, following some of the routes Jim plotted over Christmas with a few of you guys on here. Pen-y-Rhiwlas & on to Llyn alwen where we were defeated by snow. Jim had a trundle into the drifts & was able to back out but when MUX & tried it, the 'hydrofoil' bumper grounded us high & dry so out came the recovery gear that I had spent til 11 o'clock at night packing It looks fairly inoffensive but its not really snow - its halfway to ice & quite a bugger to shift...

On we yomped & on to Corwen Carwash... I was (quite unnecessarily as it happened) apprehensive of this having only forded 'streams' before. Jim sent me through first to check things out & shot some video Here, we met up with a couple of Landy owners & we joined up for the afternoon after visiting the burger van on the A5 that exists solely in Jim's mind... ;-)

Paul took over the lead around here in his Discovery - I think Jim was feeling the pressure ;-) We went up & over Cieriog Forest & then to Whitestones where we encountered a bunch of trials riders - apparently our route had intersected with a huge local event... We pulled over to let them past... Cue the 'team' shot ;-) but after a ten minute wait for no-one we carried on... And then they did too!!!

Up on the moors - the trail winding away into the distance with Jim in front of me... Queuing up waiting to drop down into Llanarmon: This is the run down the top of the pheasant pen steps: Parked up whilst the route was assessed: Rob in the other landie had been strategically positioned as lead truck by now as there had been some chat about a big hole on this route. So as his truck had a winch, he went first... Around the side of the hole, very neatly & without any problems really.

Then Paul had a go at the hole - not the best decision ever made... As a little interlude, Jim tried to hide... Can anyone spot the Jimster on the snap below?? Anyhoo, we got Paul out & Jim followed Rob's line round the side of the hole. I spotted Jim - no probs - & then nipped back up the hill to fetch MUX. When I got back, they'd all buggered off so I came on through & got a bit plugged :-( On with the difflocks (front only, rear still not playing nicely...) & out the big guy came with little effort - what a truck

Descending the steps - quite a few steps here & quite hairy... I gave MUX a light de-dusting: What a way to start mine/our laning career though - mucho gracias to Jim for getting me on-board & to 'er indoors for letting me play out. Fabulous day out & about - can't wait to do it again!!!

Great report there, Gav!! Not sure whether it was the missing exhaust or the wind noise but the sound in the video clips sounded like a top-fuel dragster at idle

Do you have the start and end points on the lanes so I might take a peruse when next in the area?


Andrew Prince said:
Not sure whether it was the missing exhaust or the wind noise but the sound in the video clips sounded like a top-fuel dragster at idle
Click to expand...


adrianr said:
Do you have the start and end points on the lanes so I might take a peruse when next in the area?
Click to expand...

Jims got the routes but I plan to print out the relative chunks of Memory Map when I get a chance to keep for my records...

Pick me up on the way by & I'll do my best to show you the tour ;-)
Don't like the adverts? Remove them by becoming a supporting member.   Click here
A

My 80 looks almost petite compared to your brute.

Great writup Gav. Would like to do that one day soon

Excellent trip report, looks like you had a great day in some good looking country.

You might as well take the flares off now Gav

You could be right Jon

That was a fun day, thanks for the writeup Gav (and coming along, of course).

Great pics and write-up - looks and sounds like you had a great time!

Are the wheels/tyres on the "T" reg Colorado in the backgound, standard? They look a bit taller and seem to fill the arches much better. Though that may just be the angle and my eyesight!

Yeah, it was a wicked day out - the decent photos are from the guys in the big landie. See, they do have their uses ;-)

The wheels on Tonka are actually 80 series rims which are more offset than the Colorado alloys; fitted with 285/75/16 BFG AT's, the arches are filled out a bit more... We get a bit of rubbing occasionally but now't to write home about.

I will be fitting some spacers in the near future - lets see what happens then!!!

Gavlad said:
The wheels on Tonka are actually 80 series rims which are more offset than the Colorado alloys; fitted with 285/75/16 BFG AT's, the arches are filled out a bit more...
Click to expand...

I should know, its my other Cruiser ;-)