heads-up, two and a half LJ78's coming up for sale

Hi folks, this is a early notice that I've decided to sell up my landcruisers... well, at least one of them and a garageload of parts anyway.

I've had my fun and am too swamped with running a business and a young family to play with them enough.

I have 'Rex', a well known vehicle on this forum, brown and gold, difflock, emu raised, roofcrate, superwinch, set of 6x cooper sst's, rear storage drawers, spare wheel bag. MOT from I think october, starts and runs fine as ever did and great platform for mucking about, camping fishing greenlaning and just being different. Since last seen on here Rex has now got black a screen visor and wind/rain window guards, lost it's rear bumperettes. Rex has got a long long list of issues that make it far from being concours, including rear arches and sills that need will need sorting at somepoint. It's reasonably clean underneath though. For the right person this is a mean machine and has masses of character. Not for everyone though. £3k would see you as Rex's new owner.

I also have a blue and silver LJ78, that I bought thinking I'd steal some parts off it for rex, but it was WAY too good to break, and looked so good and was so nice to drive, I just started using it! unfortunatly I then pranged it's nose so it went off the road for a while and I've only just now managed to get round to starting to reassemble it. This one is a great driver. It's stock, so normal ride height and a rear ARB mean it handles much more car-like than 'Rex'. And it goes very well too. I think its had a new or recon engine at somepoint as the head is painted gloss red. But it probably just goes better because of the stock suspension and wheel size. It'll happily blast about at motorway speeds. Working electric hubs and electonic shocks. mirror-tinted rear windows, JDM slit-rim style alloys, looks very 80's retro cool. I plan to finish bolting up the drivers wing, grille and lights, put a test on it. I'd let it go for £1,300 as-is, with all the parts to finish. I'll be looking for about £2k or more if I finish reassembling it and give it a fresh MOT.

Finally I have a vanload's worth of another blue and silver LJ78, among them some rare bits, and I know how much parts go for these days! I have 6 tidy doors with archtrims, set of alacantra suspension seats, set of lamps, set of unique JDM accessorised 78 sidesteps, JDM alloy roofbars, bumper and bullbar, spare wing, crossmember, carpet and a bunch of dash parts, 3 original alloys, etc etc etc. I'm not sure what to ask for this lot, as there'd be no guilt in breaking things like doors into components and seems I would easily get upwards of £2k for it all if I wasnt in a rush and sold items individually in drips and drabs (which seems nuts, am I selling the complete cars too cheap?). But I got lucky aquiring them so they dont owe me that much, and if they went in one hasslefree hit and I'd covered my costs, then I'd let them go for less. Only caveat is I'd like to not sell the parts untill I know I've sold the cars, in case whoever's buying the cars want them! (or me if I end up keeping one!)

So as is probably clear, I'm not in a rush to sell as the Landcruiser bug has gotten hold badly and I love the whole international niche following 70series thing and letting go is tearing me up. They're clearly an appreciating asset too (there's only some 150 left in the UK now). So I'd love to keep one of the cars. But if someone crosses my palm so I'm not at a loss, I know having the space and time back to deal with other projects is the right thing for me right now.

In case anyone's wondering, if someone wanted the whole lot in one hasslefree hit, I'd regretably let it all go for a neat £6k

I may be a little slow responding on here as my time is being pulled in all directions, but please I will get back eventually. I'll also try to upload some pics over the easter weekend.

Wow, hard decision Duvs, don’t envy you with this on your plate.

clivehorridge said:
Wow, hard decision Duvs, don’t envy you with this on your plate.

thanks Clive.
I'm out in Rex today, and did a quick run to a meeting up the dual carrageway here immediatly after posting that, was fun turning up to this posh new science place with all the gear on the roof and the throaty exhaust. Then to builders merchants for second time today fetching long panels. Damn I like having a truck!

Here's a pic of Rex I have handy from the recent snow. More later 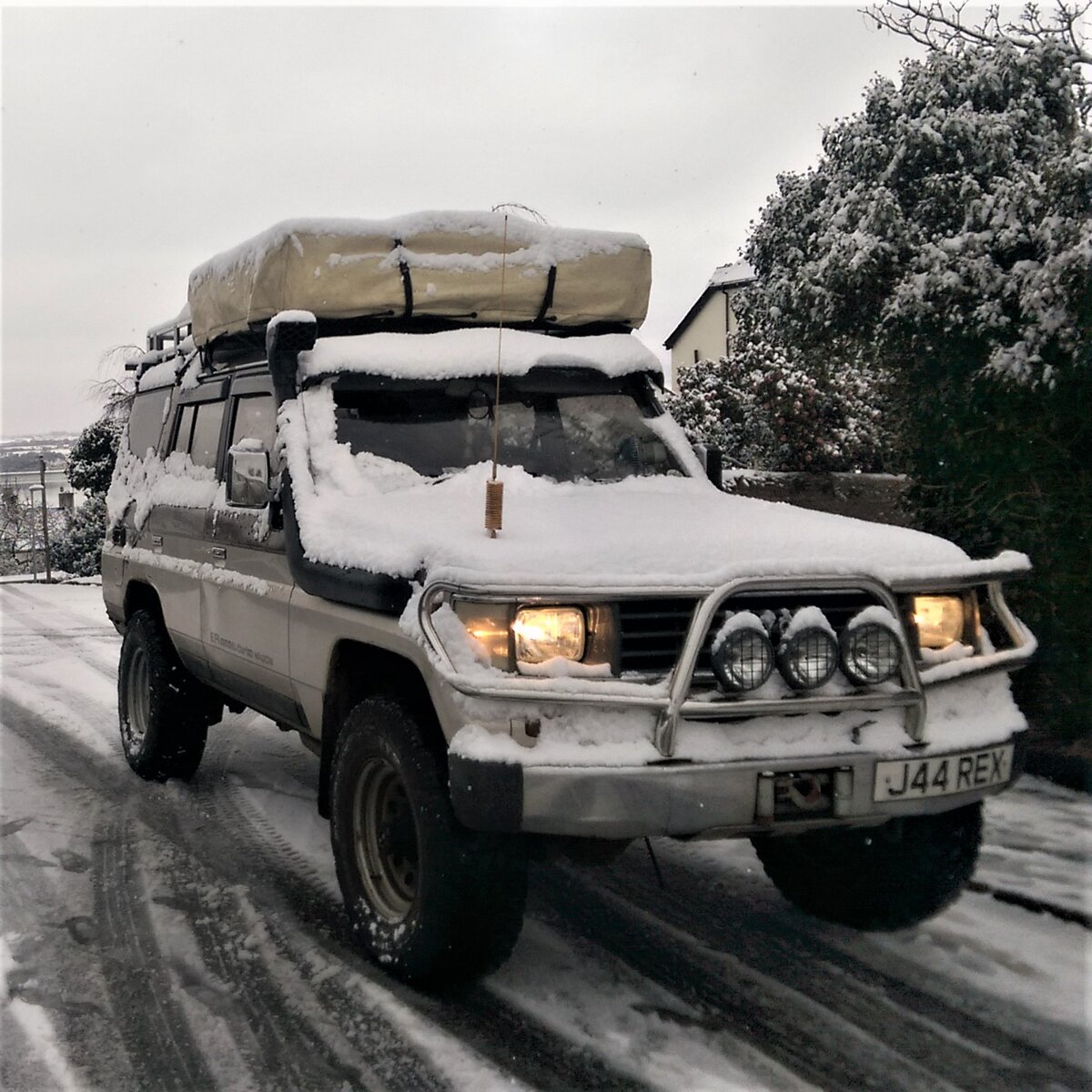 I'm gonna do what I can to get the funds together for Rex, great to see you're getting some enjoyment from him though.
Oh, and he's running a Dobinson's lift, not OME. Unless you've changed it of course?
Jim.

You know it makes sense Jim.

I look forward to a post from you announcing Rex is coming home!