Well I pulled my injectors today and found a variety of things. They have definitely been out before. There were butchery marks on them why they had been pulled out. I made a slide hammer to get them out this time. Some of the recesses were full of oil. This might have been spilled oil I guess, but nearly all of the weather seals on the bodies were completely duff. They just shattered in my hand. There was evidence of water ingress and some of the bodies were rusty. Anyway, here is a cross section of the tips. I am not an expert, but these seem to be telling me something. Does the spray come out of the very end of the tip or from around the shroud where the nut is? Either way, this must be contributing to the poor running. I have cleaned them with solvent and they look pretty good. I do wonder if it's worth bunging them back and to see how they go before opening the wallet. They are easy to put back.
Thoughts anyone? Still think that my chap sounds expensive, but he does nothing else but diesel injection and wears proper overall and everything. I think that he'll do the full Monty on them. I shall ask him the questions about dual pressure whatsit and the like, but he's already told me that he would set up the flows and pressure stuff dah dee dha and provide a full washer set. 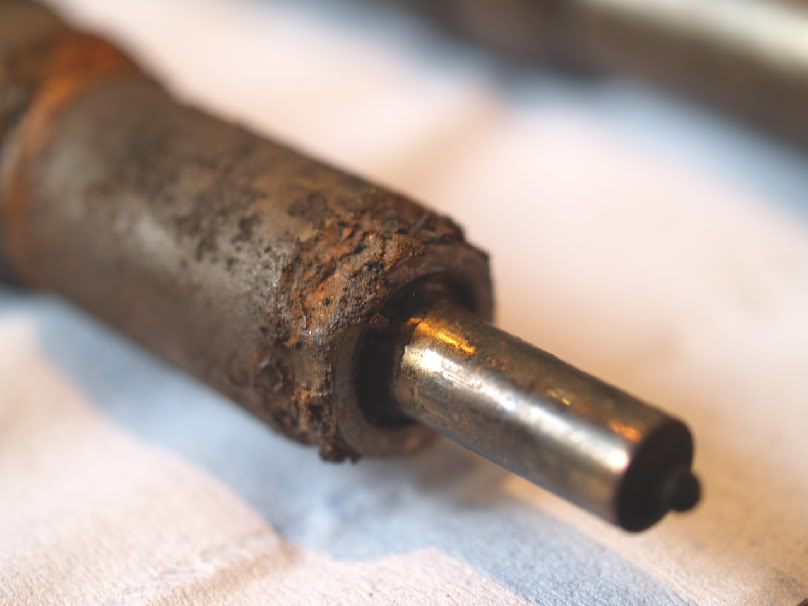 Compared to any injectors I've seen before they look well knackered. The spray pattern is from the tip. Ask your man's opinion on them befor eyou refit if you can. He might just suggest junking at least some of them.

If they've been out before and presumably were cleaned up then, and now look like that

, I would say it's a matter of time before you replace, if not immediately. It may run great cleaned up but you'll know that they're going to let water in and rust again because they did this when the last bloke fiddled with it. Maybe you'll get a couple of years running before the injectors have to be replaced - personally, I would be tempted to spring for new ones and be done with it. Maybe your man can refurb them with new tips so that they're close to perfect for a lot less than new ones? But his time and parts (new seals and tips) will be how much vs new ones?

Andrew, already established that he can re tip these. It's just at the second there are other bills to pay I'm afraid. I am looking at £300 worst case depending on the amount of time etc in setting up once he takes them apart. I have posted on this already and his view is that when vehicle is running like this and they look like this then testing the spray pattern is a waste of time. Simply rebuild them. It's like going for an MOT with no brakes - what's the point, it WILL fail and you'll only have to come back another day.

I was really after any considered views on the condition of the injectors never having seen any before. I know that looking at a spark plug you can tell how an engine is running. Do injectors tell you anything similar? About half looked sort of clean and how I'd expect them to look, but three looked pretty foul. It does seem that adjusting the fueling makes little difference suggesting that the injectors are the 'blockage'. Someone said that you can get serivce exchange injectors. So you swap your old ones plus some cash. That would be handy - anyone got a line on those?

I have concerns about the ability of the person who had them out before. There was a mixture of 'weather' seals all of which were completely 'tatered. It makes me wonder if they replaced the copper seals which JV says is crucial. Not trying to be a skinflint, they WILL get overhauled. Just got to rustle up the cash. If someone has a trusted 'jector doc then please let me know - with a cost estimate if poss, because it might be worth posting them out.

If the spray comes from the nib on the end then really all of the gooked up gunk is irrelevant to their operation, but it must indicate something such as a 'cold' cylinder where stuff isn't getting burned off? I said I wasn't an expert. I really think that there will be a huge difference when I get them sorted. There has to be more to a 4.2 straight six than this!!


Chris said:
Andrew, already established that he can re tip these. It's just at the second there are other bills to pay I'm afraid. I am looking at £300 worst case depending on the amount of time etc in setting up once he takes them apart. I have posted on this already and his view is that when vehicle is running like this and they look like this then testing the spray pattern is a waste of time. Simply rebuild them. It's like going for an MOT with no brakes - what's the point, it WILL fail and you'll only have to come back another day.
Click to expand...

Sorry, Chris, I didn't explain my self too well - what I was trying to say is if you end up having to replace the injectors, or some of them anyway, spending the £300 to refurbish may be just delaying the inevitable. If you end having to buy replacement injectors anyway, the £300 is lost/wasted.

I am no expert on injectors but the good ones I've seen look MUCH better than those and even some knackered ones that had to be replaced were better than those. Of course the real test is the spray pattern, "cracking" pressure (technical S.African term for the 2stage injection pressures

) and checking that they don't drip - it is conceivable that a nasty-looking injector could work fine, appearances aren't everything after all (so my wife explains why she married me!)

Julian has mentioned in the past that he carries, or intended to carry, a spare set of refurbed injectors for exchange for anyone needing a replacement/2nd-hand set at short notice. Julian usually points people towards RVS in Swindon for injectors and IP work - never used any diesel experts in the UK, so no recommendations from me.
What's the damage on a new injector from Mr. R btw?

I've quite a lot with injectors over the years.
The condition as shown in the pics does not really tell you anything about their performance, they need to go on a test rig to measure opening pressures and spray patterns as well checking that they close properly, quite a simple test. What can be seen from the injectors themselves is if they are sealing properly to the head as this a fault in itself, in an emergency you can reanneal them by heating to cherry red and letting cool and then they can sometimes be used again. If they are bad, you can check by doing a chuff test with soapy water. From the pictures it does look like some of the o rings around the outside have perished but they are only for keeping debris and moisture out and holding them in line when tighening down.
Depending of the type of injector, most are very serviceable but can need a setup procedure with shimming for the tips and pressures so best left to a proper place, rarely have i had to buy any new ones.
HTH

It says they are for the 1HZ not 1HD-T

Don't worry Andrew I was with you there. My understanding is that a refurbished and properly set up injector is as good as a new one. There is nothing in the body that is a problem. In terms of refurb V replace, well, If I could find a set ready to rock for less money, it'd be a no brainer. But you don't rebuild them and still postpone the 'inevitable', that money is to get them back to factory spec. The saving is that you don't replace everything. If you buy new, then you are actually wasting money on bits that you don't need to swap. Again, I KNOW that these injectors are not all running 100% in the green. If they were I would not have pulled them in an effort to get some umph and stop the constant trail of smoke behind me.

I get the fact that a foul looking injector could be spraying just fine, but I go back to my point - what does the condition of.... sorry the APPEARANCE of an injector say about the engine - if anything? Some were clean and some were very badly fouled. Maybe the clean ones were more recently replaced??? I have no history on that. But the O rings were two different types. If the seating had not been done properly then gas and oil would presumably blow past the injector into the recess in the head. A couple were full of oil. I like the idea of a chuffing test though, Paul

I have mailed Lord Voelker to see if he has anything in his bottom drawer. Thanks for the wisdom so far Guys. Damn, just had two days in Swindon! If they were a tenner each to do then we wouldn't be having this conversation. But tax due, insurance due, front diff due, injectors, inlet gaskets . . . . . .