My Ignition key is stuck in ignition

Well it went in as per normal, startred and did drive for 30 minutes.
When I come to switch off, and remove the key, we have a problem.
My Ignition key is stuck in ignition, it seems that it will not rotate fully anti-clockwise to the 'lock' position.
I am pushing the key in as normal, to get to the 'lock' position, but to no avail.
Any ideas, did it hapen to any one else ?

nothing at all,
The key just went in as normal,

I have a spare key, key, if the key is damage, but need to get the old key out ?


It seems like it is not rotating enough anti clockwise.

I guess you've tried turning the steering wheel a bit? Can you start the car and drive it still?

According to the FSM the key interlock solenoid is controlled by the Shift Lock Control ECU which is powered through a fuse labeled ACC. Sounds like either the solenoid is faulty or it's not getting power for some reason? Looks like the Key Interlock Solenoid is attached to the side of the key barrel with a couple of screws.

If you have the auto box, make sure that you are in park. Found this out by mistake the other day.... that's all I can think of
Don't like the adverts?  Click here to remove them
A

I had this problem on my Surf just before xmas, tried WD40 and graphite in the lock, also tried using the spare key and hitting the lock with a big hammer, I did find that leaving the key in for a couple of hours and locking the car with another key worked, although that not safe if leaving it in town, but it did seem to just come out after a few hours.

Anyway after reading on another forum, I took the the centre console apart and removed this, it's the neutral inhibiter switch that connects to the ignition lock. 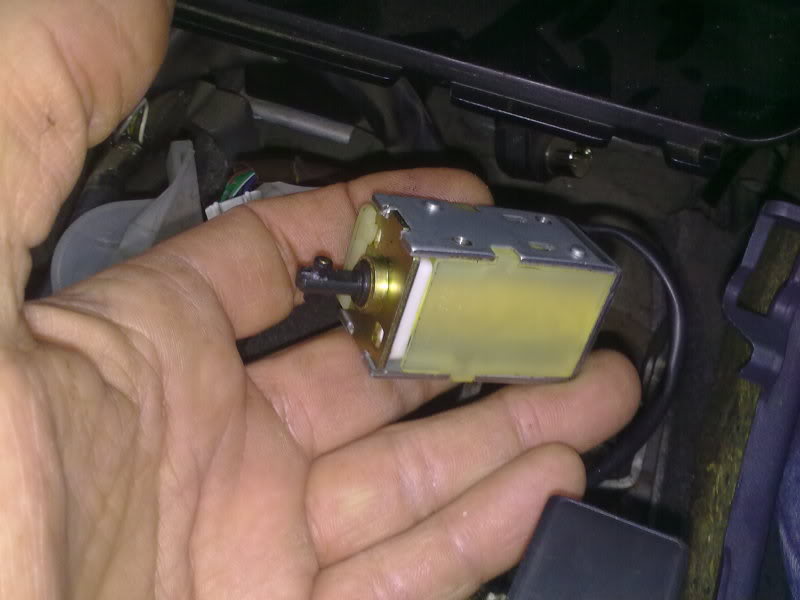 Cleaned it all up and sprayed it with WD40 and have not had any more problems.

Jon Wildsmith said:
I guess you've tried turning the steering wheel a bit? Can you start the car and drive it still?
Click to expand...

Jon Wildsmith said:
According to the FSM the key interlock solenoid is controlled by the Shift Lock Control ECU which is powered through a fuse labeled ACC. Sounds like either the solenoid is faulty or it's not getting power for some reason? Looks like the Key Interlock Solenoid is attached to the side of the key barrel with a couple of screws.
Click to expand...

.
.
Hello Jon,
Thanks for the good information.

First thing I will check is the fuse, easy.
Where will fuse ACC be located, as I think there are 2 or 3 fuse locations ?

Second thing, then a little more difficult,
I think I will pull some plastics off in the day light tomorrow morning.
If I can remove the Key interlock solonoid, that would help.

Is that the Key interlock solonoid, what Andy has in his hand on the other post in this threadm the silver looking box, with a black actuator extending there from ?

The box in my hand was bolted to the side of the gear shifter, and a nylon/plastic tab on the shifter pushes the central rod in against a spring, the rod seems to operate a micro switch inside the box, and when it's in a certain position it will release the actuater inside the ignition switch to release the key, all I did was clean a load of white grease from around the rod and spray it with WD40 and it has been working since.

Your owners manual should tell you where the different fuses are hopefully, FSM doesn't say.

I think what Andy has in his hand is connected to the gear selector or gearbox and is the switch that lets the interlock ECU know if N or P is selected. There are usually two circuits sometimes in the one switch housing, one that tells the gearbox ECU what gear is selected and one seperate circuit that just indicates if N or P are selected. I would have thought the fact you can start the car still means the gear selector switch is ok.

Andy could you still start your Surf when the key wouldn't come out?

http://www.mudtoys.com/manuals/120/2427.pdf is the FSM diagram of the steering column assembly including the key interlock solenoid. Somewhere else in the FSM it just mentions that you should hear a noise from the solenoid when you shift into N or P.
A

Yes it would still start in park and also neutral, it has 4 wires going to it so it has another function as well as the lock actuator.

andyw said:
Yes it would still start in park and also neutral, it has 4 wires going to it so it has another function as well as the lock actuator.
Click to expand...

Might want to start with finding and testing that then Graham if the fuse is ok.

www.mudtoys.com/manuals/120/2382.pdf mentions how to test the key interlock solenoid.

www.mudtoys.com/manuals/120/2376.pdf has a diagram of the shifter assembly which looks to include the shift interlock ECU that's controlling that solenoid.

www.mudtoys.com/manuals/120/2340.pdf is the park/neutral position switch assembly on the side of the box (if I'm looking at the right FSM as I'm going from memory as to what truck you have Graham)

www.mudtoys.com/manuals/120/3505.pdf is the 'interlock' wiring diagram for what it's worth

Think that's all I have from the FSM that applies.

So if I can remove the plastics from around the key, then I should be able to remove the 'Key interlock solonoid'

I will try to remove it from the key system, and see if I can take my key out.
Then I will see if there is continuity of the coil, and if I put 12 volts to the solonoid briefly, to see if it actuates.
And I will also determine if I am getting a 12 volt supply to the solonoid, at the right time, to relaese the key.

No, here is a coincidence,
Last week while my LC3 was in at local Toyota dealers, I asked them to investigate why my auto gear selector lever, no longer has a spring bias to the drivers side.
For example, if I am in Drive, then I used to be able to move the auto selector to the passenger side, into 4th, and the auto lever would stay there. Now it doesn't.

So I asked Toyota, to investigate.
They said they needed to open things up to view waht the problem.
Then they told me 475.00 to fix it.
I said, thats too much, leave it for now.


If that proves to be working, then I need look else where for a culprit.
You must log in or register to reply here.

LJ70 key broke off in ignition.