So after the previous Picadily wood thread a few of us ended up paying the site a visit yesterday. Here's a few pics of the days outing. Needless to say after the rain on friday night it proved to be very muddy and pretty challenging.

To be honest our welcome wasn't exactly confidence inspiring. Most of us, bar lil blue, were greeted with a "your gonna take that in there? are you sure?...but you don't have tractor tyres!

Anyway i have a few pics of the day which you'll see below. The pics stopped when we collectively got into a bit of bother. Myself and Ecky had to be recovered, Thommo and Crispin had to be "assisted" onto another track. I have to hand it to Tony and Lil blue though. Without him and blue's abilities we would no doubt have been stuck for alot longer. Both were a legend, i now think of the pair as a bit of a Jack Russell cross St Bernard on steroids. As iI'm sure you've gathered Tony ended up taking on all recovery duties for us winchless folk.

All in all it was a fun...ish day. I came out lacking a passenger side wing mirror and with a few less straight panels... and lacking a right rear wheel arch...

Note to self: Just cause 'lil blue fits doesn't mean i can

Anyway here a few of the pics before things got hairy. The pic taking stopped after that. 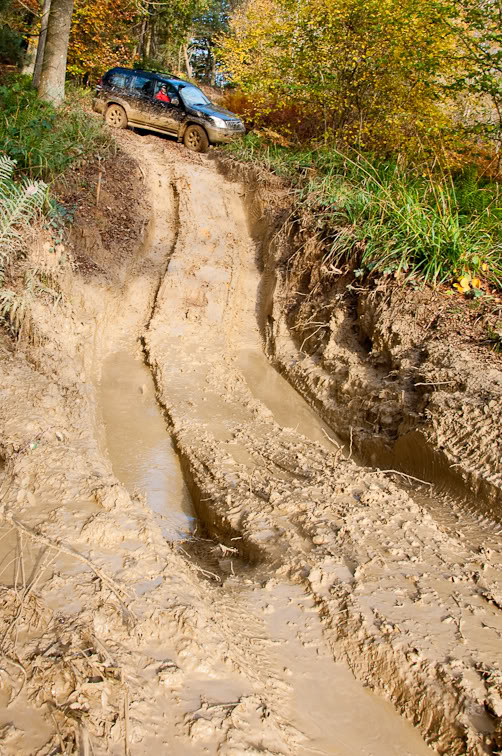 This is the last pick i got before the panel beating commenced...

I'll post a pic of my bruised cruiser tomorrow...

I agree, without Tony we would still be waiting for the tractor.

On a whole, it was a good day out but I would not do it again. I dislike mud. I've learnt that now

What was fun though is when Tommo and I were stuck. With a lot of straps and some cough, clever ideas from Tommo's wife Claire, we were using each other as winches and with a lot of trig, trees and head scratching, we were making good headway. I am convinced we would have succeeded eventually. I believe we were stuck there for about 2-3 hours. It was all going well in us recovering each other until the last point where I slipped sideways into a rut and about 6 inches away from trees. That was the end. Had I stopped in a better place, it may have worked.

The interesting thing was that if we were alone and were stuck, with enough thought, there is [mostly] always a way to get yourself out. I was recalling Chris's tale of burying the spare wheel as an anchor.


Anyway, a "fun" day out, good crowd and bummed about Ryan's battle scares. The doctor says they should heal ok and the police have released his other half without charge.

Oh, and thanks Tony!


edit: Once I get the video from Les I'll stick that up.

The real problem with your truck Ryan should be plain to see....


....Where's that bonnet deflector when you really need it eh???

Hope the damage ain't too severe

Gav Peter said:
....Where's that bonnet deflector when you really need it eh???
Click to expand...

I knew i forgot summing.

All good though. In time, and with a little £££ massage, she'll be better and ready for the next day out in no time.

I have got few ideas for mods that my sliders could do with. Hmmm... cant wait to try out my new welder

Ryan Thomson said:
I have got few ideas for mods that my sliders could do with. Hmmm... cant wait to try out my new welder

Some upright pillars and cross members?

How were the KM2's Ryan

What pressure did you run them @

Did you get a chance to air them down

Thanks for the compliments guys In all honesty I think anyone with a winch would have done the same. It was a fun day and again it showed me how capable LB actually is.

The great thing was that I came away without breaking anything... ok I creased the left hand side just a tad, but those tree sliders really did save a lot of damage

Anyway a few more pics, but as Ryan said as soon as we got stuck the pictures stopped I will echo Crispin's thoughts though.... enough of the MUD!

Oh... and if I have to get out once more to turn off the free spooler....... nice but bloody anoying when you leave it engaged and you wonder why the winch is not working

I feel so very proud. Now then Tony, if we could just get LB onto some 33" 255s muds and sort a rear winch!

Would a simple solution not be a pulley (butchered snatch block) mounted to the front bumper and a guide on the rear, you could then thread the rope through these and out the rear.

Sounds easy Crispin, but it's not. When I buried the spare wheel that time, the ONLY thing for miles that I could attach to was directly behind me. We did try some ideas to effect what you have suggested, with rocks and the like, but what it does is tip your vehicle over as it tries to pull it sideways. The wheels dig in and over you go. Rear winch is real easy. It needn't be quite the same as your front winch; it's a seldom used thing usually. But if it's demountable (like when I had LB), you just need to remember to TAKE IT WITH YOU!!
These Ibex vehicles have a winch in the middle I believe and the cable can be directed through a tube either fore or aft. Now that's clever.

That's why I said "guide on the back". I should have said "tube which makes the rope stay in one central place" and then there is no difference in where the drum actually is. As an emergency, you could try the tow eye if you could get the winch hook through.

Chris said:
I feel so very proud. Now then Tony, if we could just get LB onto some 33" 255s muds and sort a rear winch!

Made me proud I tell ye! Well comming away from the day the immediate issue I need to solve is the overheating. Anything more than about 55-60mph up a long slow hill the temp gets very high. I forgot to take the plate off to see if that would make a difference, so I'll try that, but I thin the rad is full of mud, so that's my next job.

I have been thinking about a rear winch and I may just get one yet.... funds and time really. Snatch block is on it's way (ebay 9T jobbie for £14) as I had to run the plasma rope around a tree when I recovered Ryan as I had run out of straps. LB was anchored to a tree from the back with my tree strap and the 10m one, and then we used Ryans 10m strap plus the winch...

I have also been thinking about 33", but does that mean I need new rims? (ones for a 80) The MT were good and I don't think I would go for the agressive Semtex (sp) jobbies as I can't bear the 50mph on the motorways

TonyP said:
I don't think I would go for the agressive Semtex (sp) jobbies as I can't bear the 50mph on the motorways
Click to expand...

Crispin, not sure if that would work. Threading the rope would be tricky it has a hook on the end and a steel eye. Interesting, but also rather difficult to get it under the car. Rear winch has other uses too like pulling you vehicle sideways. Very effective to get you off a tree. Maybe I am not quite understanding the design. Great if it works, but I haven't seen it done before so maybe .....

Jon Wildsmith said:
I don't know about the copies but genuine Simex will not restrict you to 50mph

Ah, you are probably correct Jon, I was just going on hearsay

Chris said:
These Ibex vehicles have a winch in the middle I believe and the cable can be directed through a tube either fore or aft
Click to expand...

Ah you be talking of the patented Foers Vector Winching system using a large centre mounted winch that runs out to the rear of the vehicle through a permanently mounted snatch block & then back forwards just to one side avoiding the engine exiting the front haws. It can be used for normal front or rear winching operations & you can even walk the Ibex along the winch line if on savage side slops & can also be used to spin the vehicle 180 degrees if required. Although I said the rear snatch block is permanently fixed what I mean is that there is no threading to be done the winching system is always rigged in the way that I've described but you can remove the rear snatch block & pull it out by removing an oversized securing pin

Here you go this should keep you busy

What pressure did you run them @

Did you get a chance to air them down

I was happy with the KM2's, I didn't let the pressure down so they were probably a little high. I didn't go anywhere Tony couldn't with the KM's. Also I got stuck in the same ruts Crispin and Tommo got stuck in with there All terrains, well we weren't stuck. We were forced to change tracks due to a Landy causing some traffic. We had to winch our noses around to get out of the ruts.

I'm starting to think it's a bit of a blury line as to where the mud terrains start to out perform the all terrains. In saying that i'd still stick with a Mud terrain next time i buy tyres.

All in all it was a good day out. A winch has now bumped itself up considerably on my want list.


Crispin said:
[quote="Ryan Thomson":10hs8rch]
I have got few ideas for mods that my sliders could do with. Hmmm... cant wait to try out my new welder

Some upright pillars and cross members?

Nah, no uprights or crossmembers. Just need to add something to the sliders so they kick me out and away from tree a bit more. Also trying to think of something to make the arches able to withstand a bit more abuse. Maybe tie in some tube from the slider to the bumper and fit the arch over it to conceal the tubing. I'm not reall a fan of the whole exo cage look but a bit more protection wouldn't go amiss.

Need to start playing with the welder...