X-Eng handbrake for the 80 series

I am pretty sick of my handbrake not working as well as it should so I just phoned X-Eng re their disc brake conversion kits that they do for LRs and the 70 series http://www.x-eng.co.uk/X-BrakeToyota70.asp and had a chat.

Whilst not yet developed, they said they'd be happy to develop and make up a set for the 80 if there is sufficient interest and kindly agreed to a club discount for a group buy.

Just think, a handbrake that actually works on an 80

You can definitely count me in for one of those

I'm going to give it about a week so that everyone gets a chance to see the thread and register if interested. I will then go back to X-Eng and get some more specifics regarding timescale etc...

i was only thinking today that i want to get one for my 70.

ben said:
i was only thinking today that i want to get one for my 70.

Count me in for another 70 one

i cant remember whether it was X-ENG or KAM with there diff locks, but one of them put a request up on difflock forum a good few months ago requesting some one to let them use there vehicle to design and fit said part, and in return the owner of the vehicle would get the part for free.

im 99% certain it was X-ENG with there handbrake.

maybe they will need an 80? got to be worth a try.

whats wrong with your handbrake you will always find drum brakes are better than disc's and pads when it comes to parking brakes.

If you use your 80 off road the handshake loosens which means it fail an mot and its a pain to offroad if you have a manual. It only requires a couple of articulations on the rear axle and you have no handbrake.

Sent from my GT-I9100 using Tapatalk
A

I've read that about the 80's. i must be one of the lucky ones - julian adjusted mine oct 2009, been fine since - and trucks has done a fair few axle articulations. must be a real pain if it undoes itself

Had a chat with Si about this a couple of years ago- he's struggling to find the development time recently, but if we can guarantee a reasonable order i'm sure he'll get his arse in gear.

Last time i had a proper discussion about this we tried offering up a couple of his designs to the back of the 80 t-box. the problem was that a lot of LR designs are really quite large and will hang down well below the bottom of the t-box, which is already too low. He did have another design in mind though.

as to discs v drums- the landrover discs are mahoosive, and the caliper is easily powerful enough to hold a 3.5tonne 130, with a trailer on a serious slope.

Frankly my handbrake on the 80 is atrocious, always ful of mud, needs adjusting monthly!

i cant remember whether it was X-ENG or KAM with there diff locks, but one of them put a request up on difflock forum a good few months ago requesting some one to let them use there vehicle to design and fit said part, and in return the owner of the vehicle would get the part for free. im 99% certain it was X-ENG with there handbrake. maybe they will need an 80? got to be worth a try.

I've just spoken to Simon of X-Eng and volunteered my 80 as a guinea pig,

He needs to have a look underneath for an initial inspection to see what is necessary but won't be able to do anything for a couple of weeks as he has a Jimny on the ramp that he is fitting 80 series axles to.

Thought I ought to chip in!

I'd forgotten I'd had a look at James's (Pugwash) 80 - but it was quite a long time ago!
Now the 70 Series brake is available, I would like to have a go at the 80 Series next.

The Land Rover X-Brake uses a disk which is 220mm in diameter, and IIRC, the bottom of an 80 Transfer box is too close to the bottom of the vehicle for a disk that size to be viable without dangling too much below the chassis rails.

I would be interested in your opinions on what the maximum size disk you would feel is acceptable?

We have a new, prototype caliper which ought to work on a somewhat smaller disk, but still achieve similar stopping force. It's nice because it has two moving pads rather than one as per the current caliper which has to sit on slides to centre on the disk. It's also Anodized Blue - and looks much more expensive than it is!

For the 70 series version and 80 when it's a reality, I'm happy to offer a discount for a group buy, discount depending on quantity.

A quick final question for you, do you know if it's the same transfer box in a 70 as a 79? I've had an enquiry from someone who has a (possibly more than one?) 79 series converted for military use who wanted to know if it would fit? Looking at the News last night, there did seem to be a lot of 70 series LC's driving around Libya with guns bolted on the back!

the transfer box on the 80 sticks below the chassis rails as it is! I had a play with one of the second run of backing plates (with the sticky down bit to protect the disc) and it was way too low- and what with being at centrepoint of the wheelbase any breakover would catch it directly and quickly-

yonks ago you mentioned a design using (iirc) a cone brake setup which was a lot narrower- but you hadn't developed it, (another one of your sketches

)- did you have any more thoughts on this?
X

I did build a prototype cone brake - which worked really well, until it got mud in it! Then it just ground away the cones until it didn't work at all!

I half made another prototype which actually used the brake pads from an 8274 winch (which, if you don't know are just a ring of friction material, like a big washer). That was only really abandoned when the controller on my CNC Mill let the smoke out! It was six months before it worked properly again - and to be honest, I'd forgotten about it! Definitely worth another look though as it was only 12cm diameter.

Just found quite a nice drawing of it! Shhh...don't tell anyone! 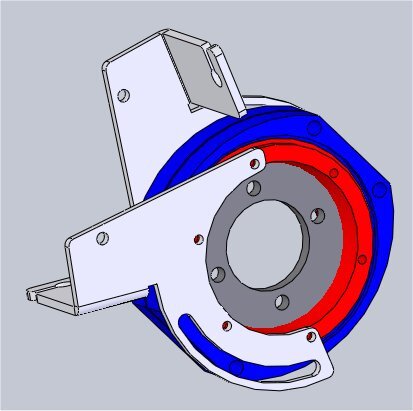 The blue bit is fixed to the transfer box, the red bits (one on either side of the disk) rotate when the cable brackets are pulled together and sit on a ball-screw so they screw in towards the disk. The slots in the cable brackets limit the amount of rotation of the red bits when the brake is applied. It will allow the prop to turn 30 degrees when locked - but there is usually almost that amount of backlash in the transmission anyway.

Imagine you have screwed two nuts on to a bolt with a washer inbetween. When the nuts are loose, the washer can turn, but when you screw the nuts together, they close on the washer, they grip it. Before they get really tight, you can turn both the nuts and washer on the bolt without the washer being free to move on it's own. This movement is necessary to allow the pads to self centre on the disk.

Red Oktober said:
would be great if there was one for a 70 series auto

Later in the year hopefully! Just need to rotate the back plate & caliper to clear the Exhaust.