A little weeding during Lockdown . . .

Nothing to do with Landcruisers - but I thought it might amuse.

June 2016; One of my Beech trees had died and I set about cutting it down (I reported all this at the time): Later in August 2018 I hired a 2.7-ton Kubota digger and set about removing the stump. How did that song go . . "For he had high hopes , , high hopes . . High pie in the sky hopes". There was no chance of that mini-digger shifting that. Still no luck, just a bigger hole and more mess. I'll have to think again.

Neighbours suggested Dynamite or Semtex, but its a bit near the garage

I tried burning it out. Nope; that didn't work either. I left it to dry out for a while.

August 2020: I dug under it with an SDS-MAX drill and a long spade bit. The ground is solid clay with rocks and very hard.

Then I set a fire under it: 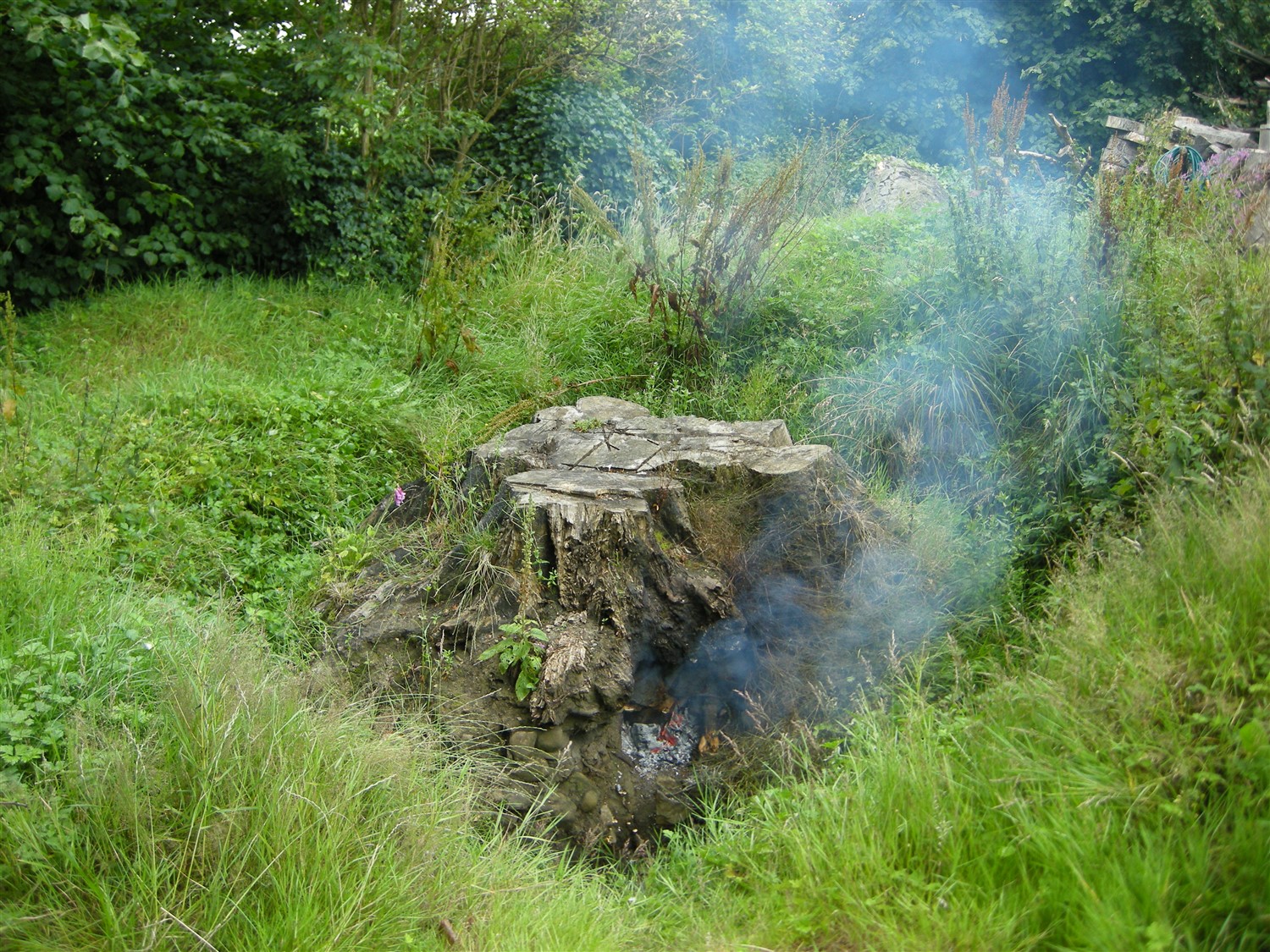 Still no luck - so I bored a hole down from above to act as a chimney that would allow it to draw: I had some partial success with this and ended-up with a hole in the top. Time for more thought.

March 2021, here we are, five years after I started and, at last, one of my ideas actually worked

I thought that if I chainsawed down to isolate a root buttress, then cut a housing 10" long x 5" deep and at least 6" wide spanning the cut, I could lay my 10-ton bottle jack horizontally and force the side of the stump off the main core.

Cutting into soil, dirt and stones with a chainsaw is a no-no, but I decided to sacrifice a chain or two. Three chainsaws (of my eight) were deployed. The cuts were made and, with a 24" power bar on the jack the heaving started.

A deep "CRACK" and the side started to split away. Pity I didn't take pictures.

Using this method I removed three root buttresses - about one third of the stump. They were hauled out with the farm's Merlo Tele-loader and taken to the "garden waste dump".

That left the main core, which I cut in half and started to split. Unfortunately the wood didn't part from the underlying clay and rolled to one side with a massive root ball.

A large off-cut from an earlier felling job kept the two halves apart: Now to get the lumps out.

The Merlo will lift 3.5 tons (fully retracted). It was struggling with this - which is about one-third of the stump. And off to the dump. We managed to get the chain to grip this piece, the next one would be a lot more difficult

The final third wasn't free so was pushed, prodded and pulled with the boom.

Then we spent an hour trying to get the chain and my collection of strops to grip it.

Finally we dragged it out. So we resorted to the forks - and away it went. I now have a large hole to fill. I'm putting plant material into it to try to improve the dead clay. I also need about three cubic meters of topsoil to replace the volume of the stump.

Then its back to the JCB try to level the ground. I'll Rotovate it and level it before seeding, but I know it will settle and leave a large hollow over the coming years. Levelling with topsoil and re-seeding is likely to be an annual task. I thought weeding was supposed to be a relaxing pastime

My thanks to my neighbour "Landrover Bob" Webster (there are ten LRs of various shapes around his cottage) for providing invaluable assistance and for driving the Merlo (I can, but he knows all the farm's security codes !). Bob is Secretary of "The Scottish Off-Road Club", hence the excess of LRs.

This turned out to be a five-year project, I wasn't expecting that.

Well done for not giving up!

And i can't help thinking a couple of bags of coal and slack might have kept it burning for a fortnight without going out .

This is what happens when an Amateur Operator and a clapped-out JCB meet good, wet, sticky CLAY.

I put a couple of cubic meters of well-rotted plant material into the hole then tried back-filling.

I was just getting large clods stuck to the bucket and when I tried 'dozing' it in it just left deep tracks with high sidewalls. When I ran back over those walls I just got more deep tracks and more sidewalls

The JCB is now like a Toffee Apple, I have had to scrape the clay out of the tracks and sprockets - it doesn't wash off with a hose.

One day there will be grass. Tomorrow I'll be digging out a couple of apple tree stumps

lol.
bob, i think i would of just used the stump as a bird table..

as ever thought, 10/10 for effort and sheer dogged determination.

Personally bob I'd just use the ditching bucket at that point and pull it off flat.

Good effort. I've seen and know a few stump grinding guys. I dont know what size they can grind up too as that's a fair stump.

Personally I'd have shaped it into a stump chair, or in that case a stump throne..... but well done for not giving up.

It fought back even when dead!

Personally I'd have shaped it into a stump chair, or in that case a stump throne..... but well done for not giving up.
Click to expand...

Thats what I'm doing, albeit with a much smaller tree, and therefore smaller stump. Its part of a boundary bank, and could cause stability issues if I pulled the stump. So a bench and a spot for a cuppa, and a nice view over the land... I have another in the garden that I'm dreading going near.

Bob said:
and a nice view over the land
Click to expand...

Bob said:
Thats what I'm doing, albeit with a much smaller tree, and therefore smaller stump. Its part of a boundary bank, and could cause stability issues if I pulled the stump. So a bench and a spot for a cuppa, and a nice view over the land... I have another in the garden that I'm dreading going near.

Top marks for not giving up.
The water-table looks high there Bob, I guess that’s why it wouldn't burn.
I've fetched out loads of stumps, but nothing any where near that big.
Nice post

Bob said:
That's what I'm doing, albeit with a much smaller tree, and therefore smaller stump.
Click to expand...

That was just one sprout of the weed

And they say the camera never lies

That is a great view

We won't get into a stump measuring contest!

. that was serious work you hed getting that out. Fair play for persevering. I probably would have given up

Bob said:
We won't get into a stump measuring contest!

. that was serious work you hed getting that out. Fair play for persevering. I probably would have given up
Click to expand...

I'd have moved house...
You must log in or register to reply here.

Funny how life throws you those little curve balls isn’t it? Ho hum.
3 4 5