Well, the rain finally stopped so out came the tools and overalls. GW now has 105k on the clock, so BEBs should be pretty good still, Duuur Duh (music from jaws)
Didn't have a lot of trouble getting the sump off. Took me about 45 mins. There is clearly a trick to it and I remembered that JV usually sets to with an air chisel, so I was fairly brave.
Unpleasant have oil dripping in your eyes, nose, ears, mouth. I drained the oil yesterday so I hoped that it might not drip much. Hmm

Took the oil strainer off to make better room to work. There is an egg cup full of oil still in there by the way. Did No 1 cyl first and was slightly concerned to see some scoring on the crank. After a mailed pic to JV and a chat, we decided that it was probably not terminal. All the other crank journals were pretty good.

Here are the results 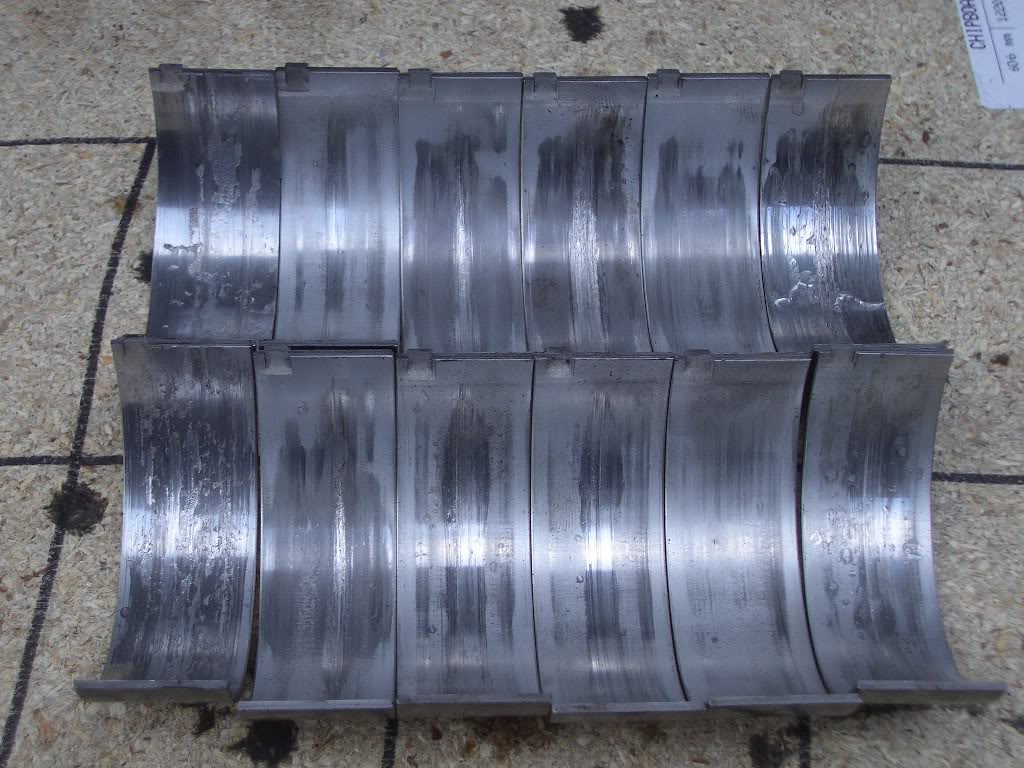 Cyl 1 actually look like mechanical damage as well as this scouring effect. as well as this scouring effect.
The other shells are 'tolerable' if you like. But look at number 6 Honestly, I really think that this should have been a recall. My local Mr T parts man whom I have known for years, said that he didn't know anything about it being a problem. I shall be dropping these on his desk next week.

I used Graphogen assembly paste on the shells to give it a fighting chance to start with. Oil pressure came up pretty swiftly and it very slightly higher (on the renoundly accurate gauge) than before. Might be due to the new oil. Anyway. Had it up to temp, everything sounds, smells and feels fine.

Not a difficult nor technically challenging job, but you really do need to have the basics in terms of auto mechanics. Whilst it is as simple as take sump off, replace bearings, put sump back on, it's the tricks and techniques that get those stages done that are the key. So if you are handy, then don't be afraid of doiing it yourself. But if you haven't done it yet - THEN WHAT ARE YOU PIDDLING ABOUT AT?

I bet that job gave more satisfaction than most!

Chris said:
Honestly, I really think that this should have been a recall. My local Mr T parts man whom I have known for years, said that he didn't know anything about it being a problem. I shall be dropping these on his desk next week.
Click to expand...

As you say, scary to think of how many 80s must have gone crunch over the years and the owners got nothing out of Mr T

Seen it many times cris, At least you have got the sence to check them for the time it takes its well worth doing as you have seen. Alot of people just dont bother then bang starts to knock and possibly godbye engine. Havnt seen them that bad on 100k ish before tho. My engine man tells me there were a bad batch of shells put in them. Silicone content to low or something. All good now anyway. Hav you put acl duraglide back in or gone for standard toyota? Im around this weekend if you want to sort air con m8.
cheers karl

Good job you finaly pulled your finger out

I know Jon / Karl. That end one was a real duce. Yes, I went with ACL Duraglides from JV.

That top shell on 6 is about halfway through. Imagine if that let go.

Thanks for the support there Jon.

You know that I was going to do it, it's just been a question of timing really. I haven't had my pinkie stuck anywhere it shouldn't have been, I promise. Been so many things to get done recently.
Really have to pull that front diff as soon as I can and have a look at what's needed. It's pretty noisy as you bowl along. It spoils a nice drive. Going to rebuild the starter this weekend. Might pull the diff if I get time and dry weather. And then.... that really is just about all of the jobs on the worksheet finished.

Ahh, yes, aircon. Karl, can't remember what your solution actually was. Do you need to see the truck? Which day is best for you? And when. Sent me a text when you know what's what fella.

I take it this was the first time these bearings had been looked at. ?

You were lucky that you caught it before it cocked a leg for sure.... I got Toyota to replace mine after the 80 had done 75,000km and they had started to flake but nothing like those.....

I have been told that use the new Toyota bearings as they have been modifed not to do that again however it is also important not to EVER USE API Oil and only use J Spec oil anything else and you will have the same problem later down the track....

Fortunately for me, this is a very low mileage vehicle, probably about 5000 miles per annum. So if they were to go again in 100k, I've another 10 years. By which time, it's unlikely that there will be many 80s left running anywhere let alone mine. Not an expert on oils, so will have to look into this APV versus J thing. Guys what do we know on this? I just use semi synth in mine. Nothing special, just standard diesel 10w 40.

Don't want to turn this into an oil debate.maybe we should have a new discussion on this. But the 1HDT is a truck engine and I am sure was never meant to run on Unicorns Tears collected under a full moon by a Angel, was it?

There is a good thread on the old / other forum about oils... http://www.tlocuk.co.uk/forums/viewtopi ... sc&start=0

I was fairly relaxed about lc diesel engine, just looking for a recommendation. Think i'm going to go and have a little sleep now!
L

Hi Chris
My BEB went about 10 years ago now I think.
No warning other than lose of power all of a sudden then nothing.
The cruiser stalled, and it cost me an engine rebuild.
A while after that I began to seek info about the cruiser and I changed oil to full synth with oil analysis done to check everything is OK.
cheers
john

Well it seems to be running very nicely now. Marginally quieter I think. Had a good run out on Monday, nice and steady. No worrying moments. Picked up the parts for my aircon so that's another job off the list. There doesn't seem to be any strict pattern on these shells. Numbers 2, 3, 4 and 5 weren't that bad really. I think that the moral definitely is, swap them. Regardless of how few miles you've rolled. I figured, as I said to JW, that I was probably in the amber rather then red. Clearly I was closer to the brown than anything else. If you have a truck with 200k on the clock and they have not been changed, then you must either have a miracle set of bearings in or tomorrow as you roll off the drive, your crank will fall out onto the road. Even if you stuck no name shells in every 30k you wouldn't come close to a problem. It's not a big job is it. I certainly would not leave these shores on any kind of trip without swapping them.

BTW, is pulling the crank out a big job? If you came across a badly worn one, how much grief is there in swapping it?

I think it's an engine out job, partly to get the crank bearing cap off and partly to remove the fly wheel but that could be a faulty memory.

Ooh, that sounds all rather involved. Wondered if the 80 had a special party trick up its sleeve.

Even more reasons not to dilly dally around then Jon. Shouldn't think a new crank would leave much change out of your Christmas money either. I guess reground would be the way to go, but then you'd need the Toyota bearings to match. One of my shells was a 5 incidentally, the rest were 4s.

Think you can do it with the engine in - but then you have to get the gearbox out - they need to be separated one way or the other.

If you kill the crank then it's probably more economical to scrap the engine and put another one in.

I was just thinking out loud in terms of overland roadside repair. If it all went pear shaped could you drop the crank whilst parked up an anthill. It wasn't something that I was considering myself. At least I hope not.

Anything is possible Chris - once had the box out of my Camaro on the drive with only a small pair of axle stands to get the vehicle on - took a couple of hours and the box on the Camaro makes the Land Cruiser one look like a fag box size. Wouldn't want to do it myself by the side of the road though.
D

Well, Chris sort of triggered the action but I have been preparing for this for a while (as Julian V and Ian Rubie can attest). Today I spent an ion doing the BEBs on mine. No symptoms, just saw Chris's and bit the bullet. 132663miles young and apparently in fine fettle.

Apart from getting the sump off, all was straight forward. Not having a ramp or pit in the shed I borrowed (just as well in the weather we have here today), I did it on the floor on my back and will (when this is posted) go and wash the oil out of my hair, my eyes, off my glasses and out of my clothes

Only real problem shows on the rod bearing (as opposed to cap) of No. 1 & 2 where there has been a little flake dropped out. It is ingrained in No.2 but nowhere to be seen on No.1. Both crank journals are clear of any scratches. ) and only needed to use Bat's white spots on one pair of bolts that I could get the full 90degree sweep on the torque wrench.

Once topped of with 11litres of Castrol's finest Magnetec 10W40 Semi Synth (also on a discount with Opie) I took the plunge and turned it over..... Doesn't that oil pressure take a long time to come up when you drain the engine down that far and remove the strainer/pickup pipe?

So far so good and a good day's work.

I even had time to order some air bags from Matt Savage... You can tell I work away from home, can't you

Just had mine done at 135,000, by Julian v, similar scoring to that shown in pictures. Have piece of mind now