In line with forum guidance I'm saying a quick 'hi' to you, especially as this forum comes highly recommended by a chap named Chris who I just met in my local Sainsbury's car park UK while he was admiring my LC HJ47 Crew Cab. Turns out he knows quite a few people in the 40s field, so I'm hoping my new 'word on the street' is right about this site!I'm sure I'll have many Qs in future, but if I can answer any of yours (I'm not an expert though) then feel free to ask. 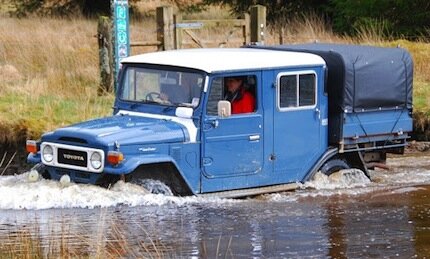 i am guessing all is now good with your monster, did you sort your drive train issue, am i right in saying you have had a colour change

Hi I love that cruiser thanks for the pics from Tony.

Good to hear from you. Yes, finally sorted that diff - cause was two bad mechanics who set pre-load incorrectly! Colour is same as always but that photo makes truck look a more vivid blue than it is, I guess due to the filter the photographer used!

Must visit you at some point and ask you to test drive the truck!

Thanks for comment. Glad you like 'her'. I'll add the truck's FB page here (which has lots more pics) when I can.

Hi Cliff I have a fj45 pick up and fj40 with HJ60 runing gear in them and love them and all the 40's
Look forward to seeing it good look with it from .Tony

Good to hear from you. Nice to hear about your 40s. Do you get stopped almost everywhere you go too - people asking about them? I'm still getting used to mine, and at some point I'm going to need people familiar with these trucks to drive mine and tell if it runs like it should as I've never driven another one - so if you're ever down London/southeast region feel free to message me.
Cheers

yeh be good to see you,your truck is very rare and cool as you know please tell me you plan to stick some more photos on

Yes, I'm appreciating the truck more and more, and I must thank you again for the help you generously gave in my early days with this girl.
I do plan on putting up lots of pics - have just fitted a roof rack and am soon refitting the newly sprayed bullbar, so will have some classy images to share. Here's one just to show the truck in action in Wales earlier this year. 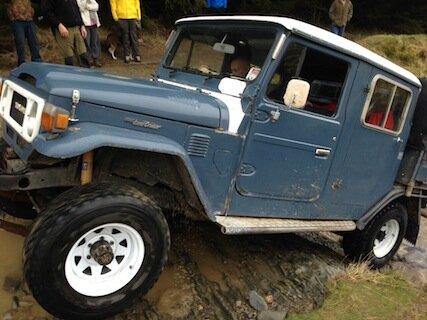 what she like off road,a friend who is a land rover fan said they are terrible, is that true?

I've only driven her off road once so far, which was a 120 mile run green laning through Wales with OneLife Adventures, but based on that trip she was as good as the best of all the 12 vehicles there - didn't even use the locker. On the trip were was my LC47, 2 LC 80s, 1 Patrol, 1 Shogun swb, 1 Mitsubishi 'sport something', 2 new discos, 1 old disco and 3 LR defenders (1 swb, 2 lwb).

The ONLY vehicles that struggled or could not climb 60 degree rock faces first time were the 3 LRs and the old Disco. I would say that the three LCs and the Patrol were way ahead of the rest, although the swb Shogun was good too.

I have film of the trip (and the especially a sad Disco trying to clim a hill!) which I plan on putting on YT some time to show the trip. And I was probably the worst driver, so she had to compensate for me too. The only shortcoming I would say the 40s off road (in my limited experience!) is that the spring hangers snag rocks easily - that said, when they do they rip the rocks out of the ground!!

On the main roads and hills in Wales she was the slowest, but then she was also the heaviest at 2.6 tons EMPTY and has the non-turbo-ed 2H!

I used to have a LR and I liked it a lot, but the 40s make LRs seem flimsy lightweights. I used to work in a boat yard where they used LRs to pull the (relatively small) boats onto the slipway and every few months there would be a horrible metallic crack as an LR rear axle sheared. The problem was solved when they bought two new LCs - never again a broken axle.

I'm no expert, of course.

That is a neat looking 40. Welcome, there are a few of us on here with 40s.
Don't worry about being the slowest (we always are in ours) but when others stop/fail you'll still be going! And anyway you get to see the scenery and it allows people to appreciate your truck!

Earlier this year we did a 5000kms round trip including Lincomb and because we are slow we use the back roads and saw so much. Our only problem was that we lost a wheel weight - a quick re-balance sorted that. Treated right, these trucks will go on forever.

Good to hear from you. I share your enthusiasm for these trucks, believe me! I bought mine with the plan of doing some long trips and interesting places, and your 5,000 klms trip sounds major and great. Must have been a great experience.

I'm planning to go to Morocco next year - so via Spain. Am looking forward to that.

That's a great looking 40. Where did you get a crew cab from? Not seen one before.
Jonnie

Hi that is one cool looking cruiser big

Good to hear from you! I bought my truck from Queensland, Australia about a year ago. There are a few crew cabs around there because of the mining industry. This one is a very heavy-build example (ie 2.6 tons), needed quite a lot of work and still renovating - but even though it never had an MOT in 35 years it still passed first time in the UK.

Have a good day
Cliff

Thanks for message. If you are down south anytime please consider giving me a shout as I'd like someone to test drive my ruck and see how it compares with other HJ47s.